The Antonov An-24 is one versatile aircraft. That aircraft lead to the An-26, which then lead to  the An-32. Heck, the Saudis gave the Ukrainian government money to design the An-132. Reasons were given for the latter, I am sure.

It’s distinct from all the other An-24s in the world because, well… just look at it. The glazed nose for the navigator really sticks out and illustrates the fact that this is a rare breed of Antonov. It does more than look cool, though. 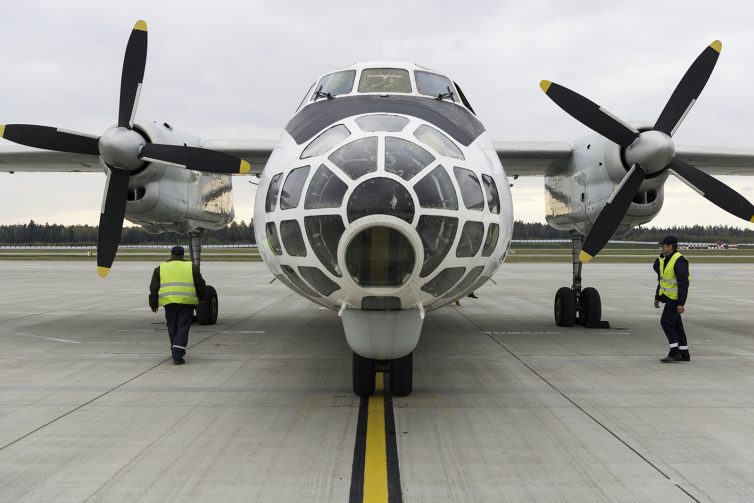 Somewhere between The Millennium Falcon and a B-29 – Photo: Bernie Leighton | AirlineReporter

After climbing aboard, the friendly aircraft crew-chief gave us a briefing. Being a Belarusian man that spoke fluent Russian, I’m not going to repeat what he said. It was an impressive amount of obscenity. I’m not even sure I could pull that off. The breakdown was “Don’t touch anything. Wait, maybe you can touch this? Oh, and for once – the coffee maker is working!”

It’s dark in there. Not the mood, but the actual lighting. But it was light enough where I could tell that the seats were original, and orange! 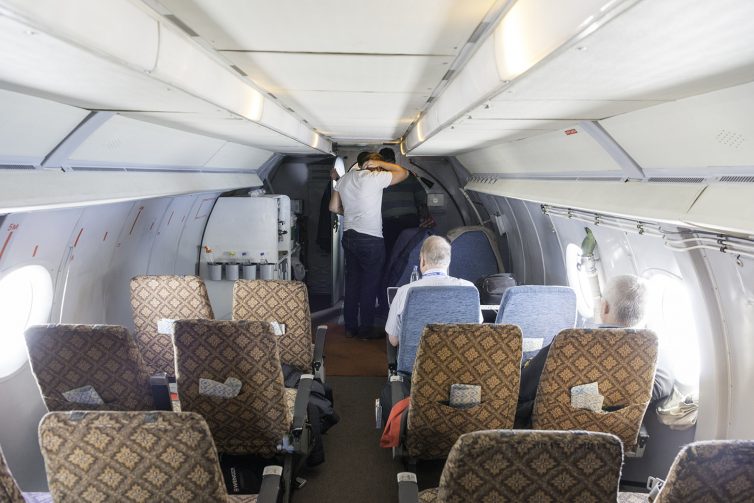 This is the passenger cabin of an An-30. In the forward left, you can see the boiler to make hot drinks. – Photo – Bernie Leighton | AirlineReporter

Aboard, it screams more “An-26 with a big nose” than “survey plane.” It’s not just the front. It has a lot of ancient cartographic and navigation instruments down the back as well. 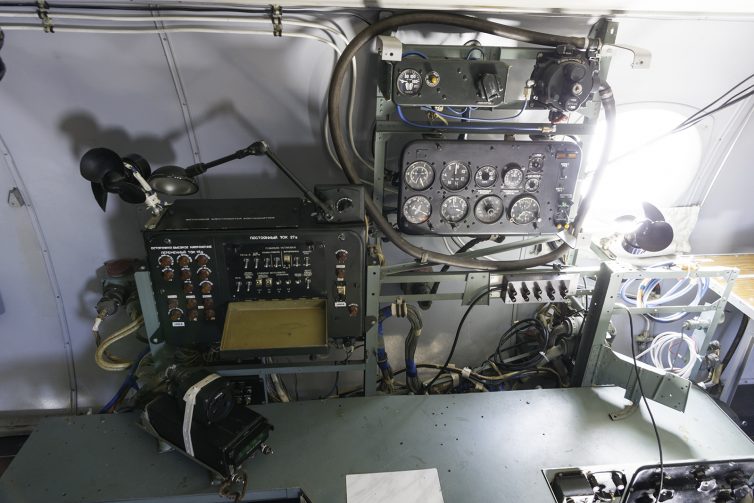 As you can see by the aeronautical instrumentation, all of this still works – Photo: Bernie Leighton | AirlineReporter

Now, unfortunately the passenger/crew seats for takeoff and landing are in the area with a mere pair of windows and this made start-up a bit strange. I could hear it, and knew well enough to put my earplugs in. That was it.

It was still raining in Minsk, as this was immediately after my Yak-40 adventure, so there were a few photons making their way into the cabin. At least I was facing forwards; this made the stereotypical Antonov taxi a lot more comfortable.

We made our way skywards, and it was a lumbering climb, but very quickly the nice man in a boiler suit told us we could leave our seats. That’s when things got much more interesting.

It wasn’t long before it was obvious that I was on an An-30 — one of the crew members started to remove a cover on the floor. Not your ordinary experience aboard any sort of airliner. In fact, on all the planes I’ve been on, no one had ever made a bee-line for the floor. “Well, that’s different,” I thought. I soon discovered why.

There’s a window under there! Seriously. 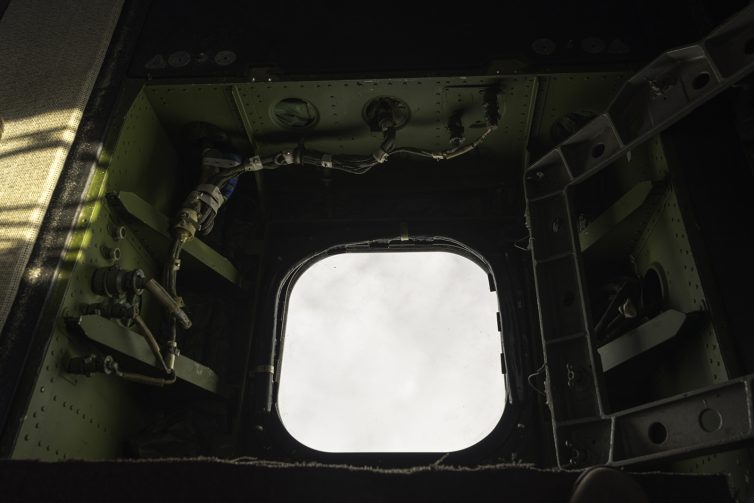 Pardon my boot, I’ve never had to take a photo of an aircraft’s floor until then – Photo – Bernie Leighton | AirlineReporter

I was on a glass-bottom boat once when I was a small child. I’ve long imagined the amazing things I miss by not having a glass-bottom car. This, within the engineering limits of a pressurized aircraft, was a glass-bottom plane. What a novel idea!

I know that there are many good reasons to have a downward looking view in a plane designed for survey and observation, but that doesn’t make it any less enthralling. 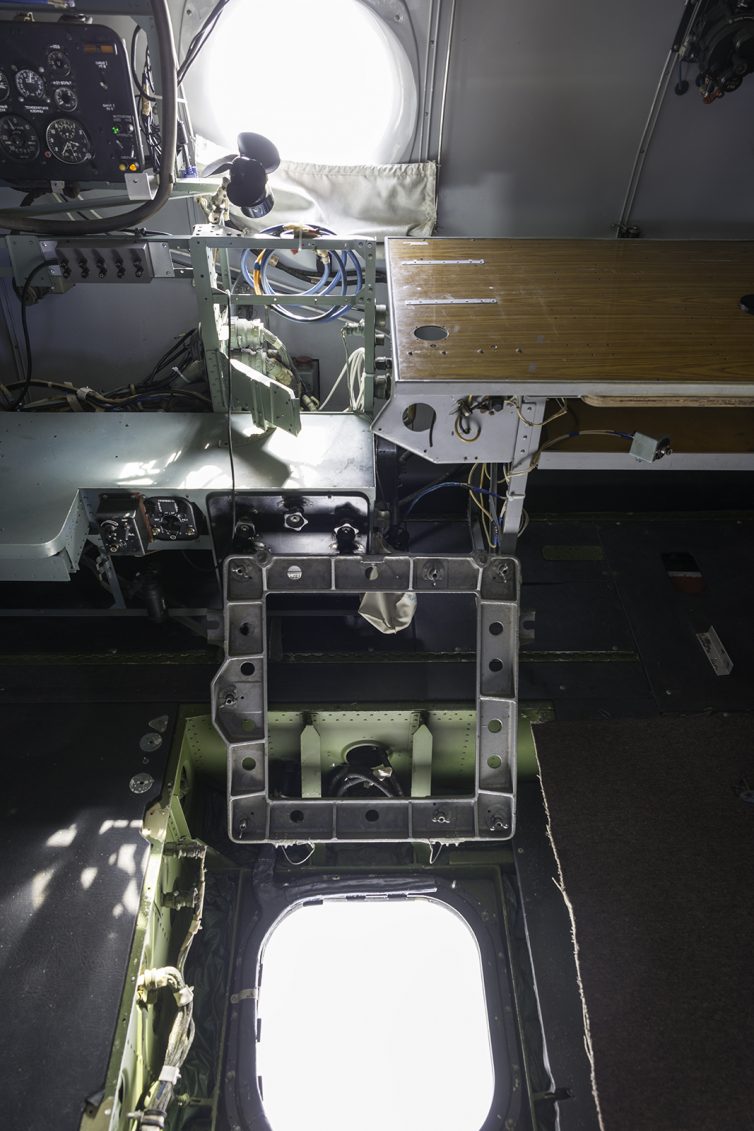 No, I didn’t fall down or use a mirror. That’s the right-hand rear cabin window above the floor window – Photo: Bernie Leighton | AirlineReporter

Shame that it was pretty soupy IMC below, I’d have loved to see something more than cloud beneath the cabin. The flight was very smooth, though. So I decided to grab a cup of tea; being a passenger is thirsty work. Before I could grab my cup, I realized that we could make our way into the glazed nose that housed the navigator. I decided to do that instead. It was well worth it.

Even with the navigator verifying the STAR and making the space feel a lot more crowded, it’s somehow even more enticing than the same style nose on the Il-76. 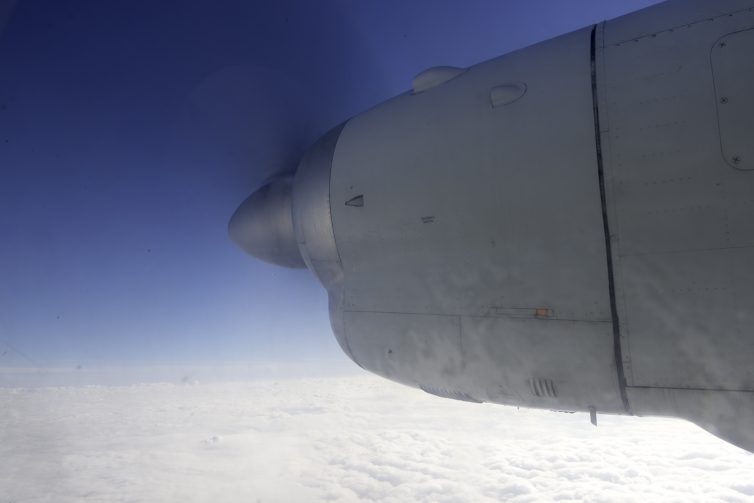 I wasn’t sure where to put this engine view in the story, so let’s close on it – Photo: Bernie Leighton | AirlineReporter

With my earplugs in, it was also nice and quiet! Without them, it’s rather reminiscent of the Il-18. A rather weird physical sensation was still present, even with the dulled sound. It was amazing, though. Reminded me of a helicopter. Given that I love flying helicopters, that’s a good thing.

After marveling in the nose, it was time to let someone else have a gaze- but as I did, I noticed the nice man in a boiler suit was closing up the floor. We were also beginning our descent. It had also turned out that everyone else had seen the navigator’s station.

We landed back in (clearing) Minsk. The landing was of almost no note, very smooth. By far, this has been my favorite Antonov to fly on yet.

https://www.airlinereporter.com
Trump’s Executive Order Violates the Spirit of Air Travel
Are Low-Cost Airlines Taking Away the Charm of Flying?
2 Comments

Thank you for yet another story on one of my favorite Soviet -era aircraft. I have a side trip planned whenever I can make it to the Czech Republic to go check out their old open-skies AN-30 at a little air museum they have. You’re not alone! Other people do obsess over lesser known variants of old Soviet aircraft, like the Yak-42D and the AN-30. Thanks for getting out & riding on these cool old aircraft and writing about it.

A most interesting airplane. Truth told, I have no major concerns about Soviet Era hardware, but their pilots are another story. A good report!