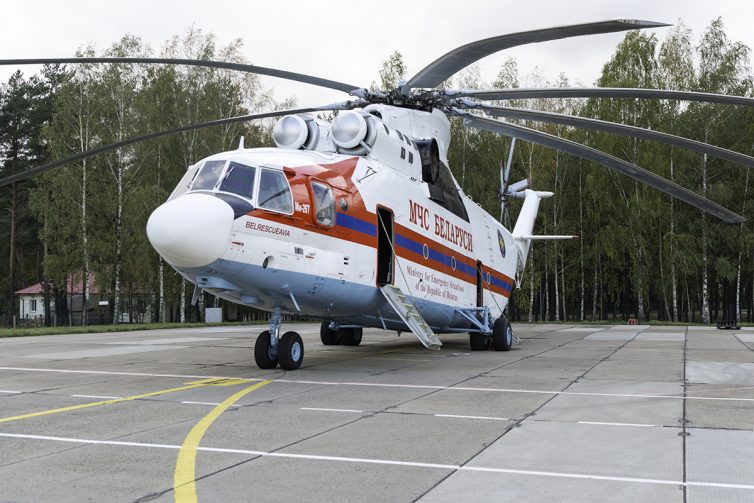 This is an Mi-26T; MChS Belarus uses it for firefighting – Photo: Bernie Leighton | AirlineReporter

It may have long, flat sides. It may even have a cargo door in the rear large enough to drive a tractor into. Let’s not forget that this is a helicopter. Not just any helicopter, either. 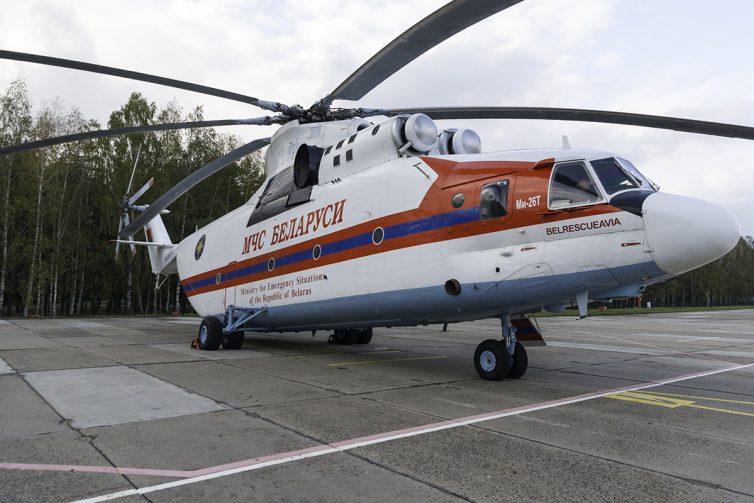 Those are not small trees in the background. It is hard to illustrate how large this thing is. – Photo: Bernie Leighton | AirlineReporter

This is the Mil Mi-26. Specifically an Mi-26T. This one is based at Lipki Airfield on the east side of Minsk, home of a detachment of pilots and other staff who work for the Ministry for Emergency Situations of the Republic of Belarus. 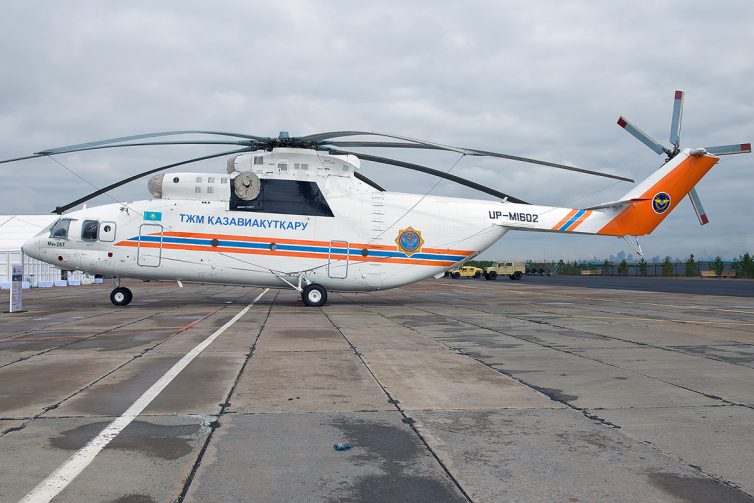 It’s just handy to have a big chopper in case of emergency. This one is from the Kazakh Ministry for Emergency Situations. – Photo: Bernie Leighton | AirlineReporter 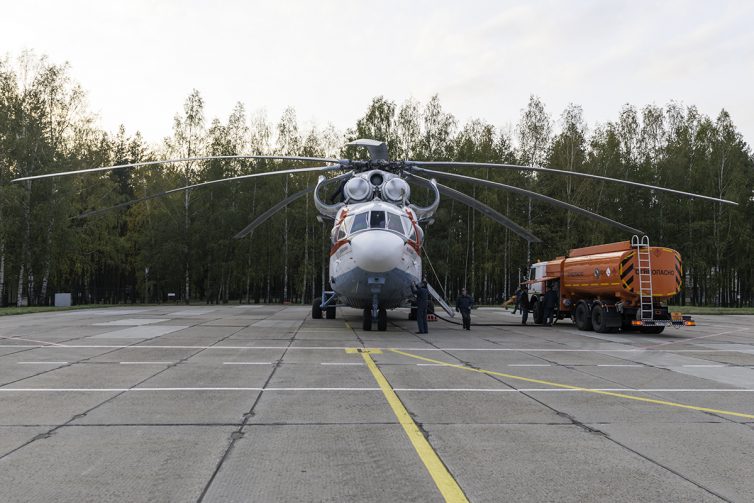 The disc is 130 feet across; it is composed of seven blades – Photo: Bernie Leighton | AirlineReporter

You don’t really care about ÐœÐ§Ð¡. It’s okay. I think they’re really cool, but I understand if you want to know more about the Mi-26T, beyond the fact it’s imposingly huge.

I love this helicopter so much it is hard to know where to start. So let’s start with the engines?

They’re Lotarev D-136s. Each one produces around 11,300 shaft horsepower. The shafts connect to a positively massive gearbox, which requires its own dedicated cooler (you can see the inlet between the two main engine intakes). To give you some perspective on these giant engines, they’re airliner engines with a gearbox. Seriously. The Yak-42 uses Lotarev D-36s, the first three-spool high-bypass airliner engine designed in the Soviet Union. It’s a solid core to work from. The D-136, beyond the lack of front fan, differs from its airliner brother by having one less mid compressor stage. Can you name another helicopter that uses commercial airliner engines? Thought not.

What about the fact that, if you absolutely had to, you could cram around 90 passengers aboard? Lift 42,000 odd pounds of stuff? Even more impressively, do all that with a disc RPM of 132. 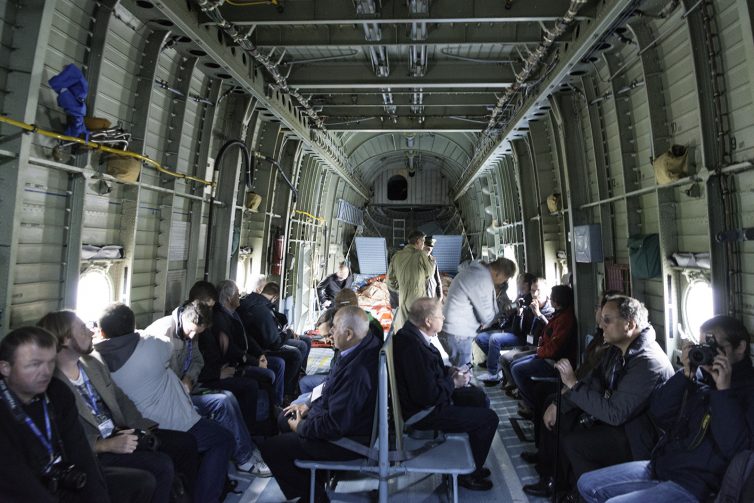 It’s dark, and not super well apportioned, but it sure screams Il-76 – not helicopter! – Photo: Bernie Leighton | AirlineReporter

Okay. So it kind of looks like a barn in the passenger/cargo/loadmaster area. Yeah, it has a crane. It certainly doesn’t do itself any favors.

Now, having said that; Mil did pitch a battlefield Command and Control version of this helicopter – but outside of a prototype, it never went anywhere. Where the fun really begins is the same as any other chopper: the flight deck. 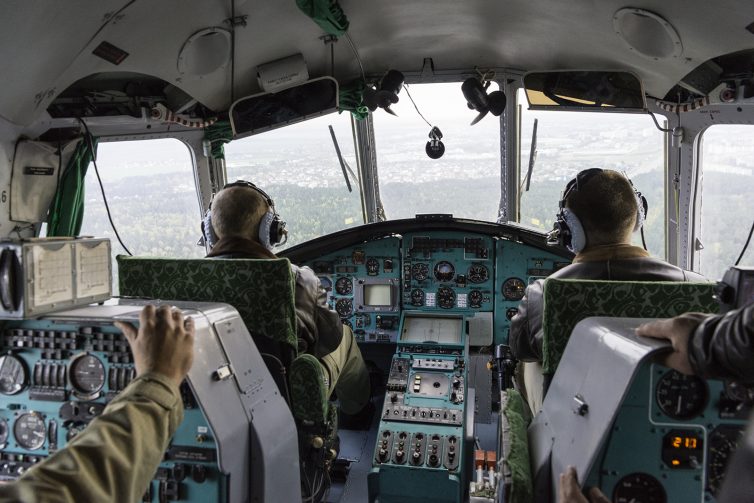 Now, most helicopters are a single pilot affair. Most Soviet helicopters, even, had a maximum of two crew.

The Mi-26T has a crew of four up front (a commander, copilot, navigator, and flight engineer).  We also cannot forget the loadmaster down the back that also serves as crew-chief and a mechanic. 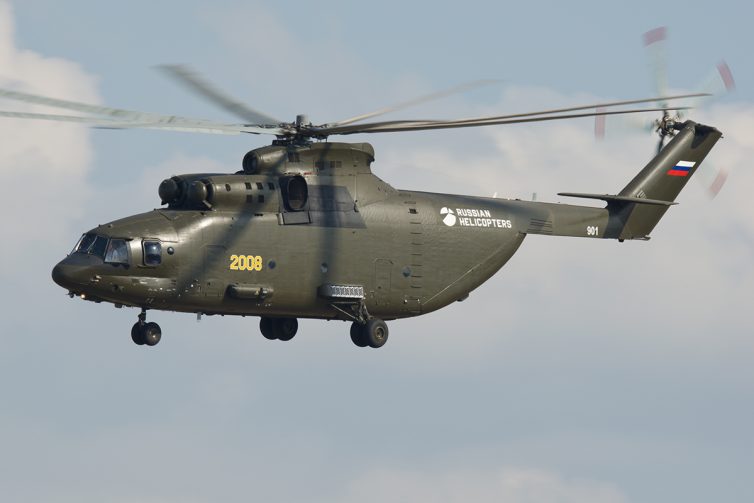 Of course, the newer Mi-26T2s only need two crew up the front – Photo: Bernie Leighton | AirlineReporter

Now, obviously; I wasn’t just there to take a look around. What’s it like once the flight engineer starts introducing a mixture of TS-1 and air into the compressor? Menacingly loud.

This one has no descriptor. I knew well enough to bring my own hearing protection as even the venerable S300 isn’t quiet inside, but this is a galaxy away. I was too preoccupied with other things to be holding my iPhone to get an accurate sound reading.

The loudest non-aviation event I’ve ever been involved with was when I was at the launch show for Strange Little Birds in London back in June of 2016. Even with my ears on, I could tell that was but a whisper compared to this.

You know that band Disaster Arena? “Their songs are on the whole very simple and mostly follow the familiar theme of boy-being meets girl-being beneath silvery moon, which then explodes for no adequately explored reason.” Their sound is best appreciated in a bunker thirty-seven miles away from their stage.

I have absolutely no idea what it’s like for start-up and pick-up outside.  I am told, however, the auditory effects are similar. Now, taxiing a chopper with wheels is always weird to me. You still have to pull a little power to get marginally light before one uses the cyclic to move around. From there, it just feels odd. It’s a helicopter; hover taxi! Then again, it is kind of fun.

We made our way to the very short Lipki runway and positioned on one of the large helicopter circles. The Mi-26 is a two-part pickup machine only. No up and over like the HEMS guys do. Get light on the wheels, steady up, check the gauges, then go.

Transverse flow and into ETL is quite a massive amount of vibration. Surprising absolutely no one, the onset of these classic helicopter events are around 20-30kts. Shocking, right? From ETL we climbed into stereotypical helicopter altitudes, 500 feet above ground.

The thing that you notice most about the Mi-26 is that it most certainly proves the rule of “the larger the ship, the more stable it is.” It is a rock, a rock combined with a tour bus. Sure, it still feels like a helicopter in that there is always the vibration – but where it counts it wont budge.

Now, the itinerary was a city tour. Except, there are not that many windows. 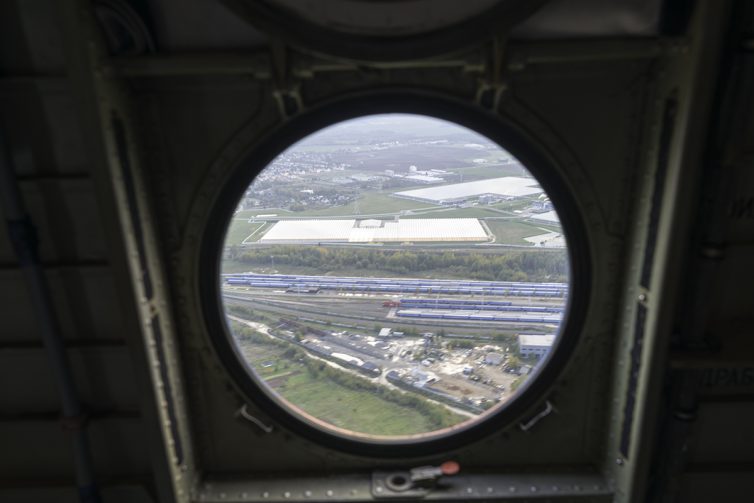 The cool thing is that the windows open! One can also open a door surrounding the cargo hook to lookout below you. Cool and all, but who cares? The helicopter is the attraction. We’ve all seen Minsk a hundred times.

At some point, with a helicopter; you realize one thing. It’s a helicopter! The hardest part is probably getting it started, but on this bird – someone else does that for you! 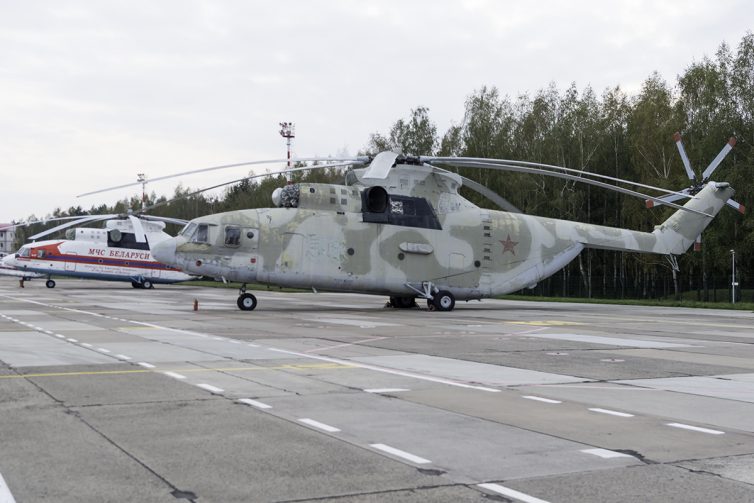 There are two other Mi-26T at Lipki. One of which still seems to bare a fascinating livery. – Photo: Bernie Leighton | AirlineReporter

It even lands like a helicopter. Well, one with wheels and all the ground touching parts behind the flight deck. Put the mains down first, then land the nose.

Man, that was fun. New favorite thing; right there! For 26 million dollars, you can buy your own.

P.S. It’s a big birthday for me this year; anyone want to do a group buy?

https://www.airlinereporter.com
Common Aviation Questions — Answered by Cool People
Get Ready, Economy Class Is About to Get Even More Basic
1 Comment