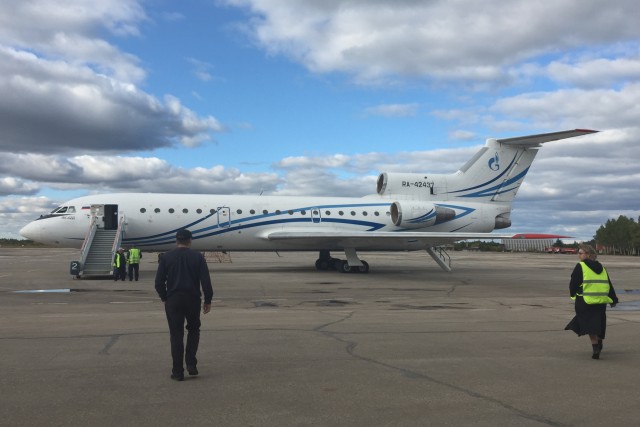 Is this a private employee shuttle? Not always. At first glance, one would assume their fleet of Superjets, Yak-42Ds, Tu-154Ms, and even 737-700s (as well as over one hundred helicopters) ply the vast Siberian and Arctic skies from oilfield to oilfield. Nope — they also provide scheduled passenger service. One would think this would be an easy way to catch a ride on a Yakovlev Yak-42Â . This is Russia; there’s always a catch! 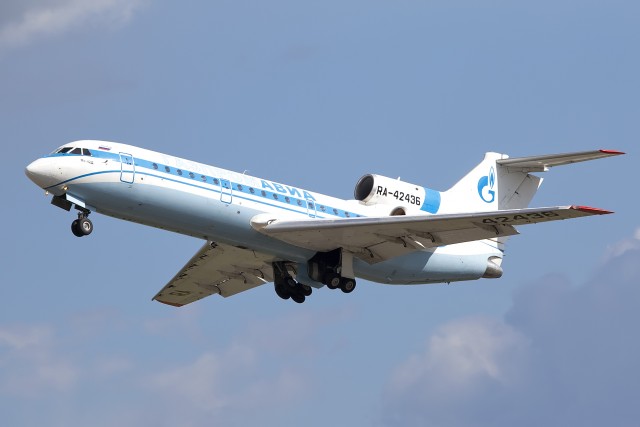 Is it easy to book a Gazpromavia ticket if you can’t read Russian? No. Is it easy to book a ticket if you can read Russian? Also no. Some of the major travel websites in Russia just outright refuse foreign customers. And then, if you can find someone selling a Gazpromavia fare, chances are that your bank will freak out. It will take at least half-an-hour of annoyance and hold music to get that part sorted. At least it did for me, and everyone else I was flying with!

Eventually, you will get a Gazpromavia ticket, but realize that most of the places they fly, or any Russian airline still using local aircraft for that matter, are not places that draw many tourists. You want to do a “turn and burn.” Leave Moscow, enjoy the plane, explore the airport, go back to Moscow. Overnighting: bad idea. These flights are not daily so if you miss your flight, you’ll be there for a while; plan ahead. 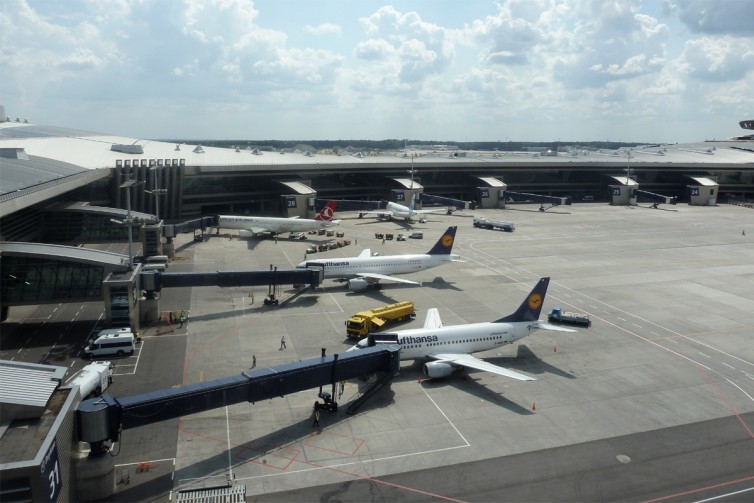 The Yak-42 itself started as a Yak-40 that was doubled in size. The role of the project expanded to create a regional jet that could not only replace the venerable Tu-134, but also various Soviet turboprops such as the Il-18. The Yak-42 was going to be a superstar of Soviet Aviation- until the money ran out. When production was stopped in 2003, under 200 Yak-42s of all variants had been produced. There are most certainly less than 50 flying now. Â The Yak-42 I was to fly on was a Yak-42D. The D stands for “long range” in Russian.

Vnukovo is the most recently redone of Moscow’s airports and it’s lovely. I’d enjoy showing the airport to you, but there are signs everywhere forbidding photography and videography. So you will have to take my word for it. I took the AeroexpressÂ train there and it was a breeze.

What was not a breeze was getting cut off by a school teacher who thought that “business class” meant “group check-in” forÂ 40Â children from the Komi Republic. Again. This is Russia. Just accept the weird. Since I wasn’t able to do online check-in, I was in 1B, which was not a window seat. Not fuming, as I was traveling with a friend and knew I’d get the window at least one segment. I made my way to where we thought the lounge was, but missed out. Much like Santiago, there’s a secret premium domestic security line that takes you straight to the lounge. Are there any signs for this in English or Russian? No… oh well. 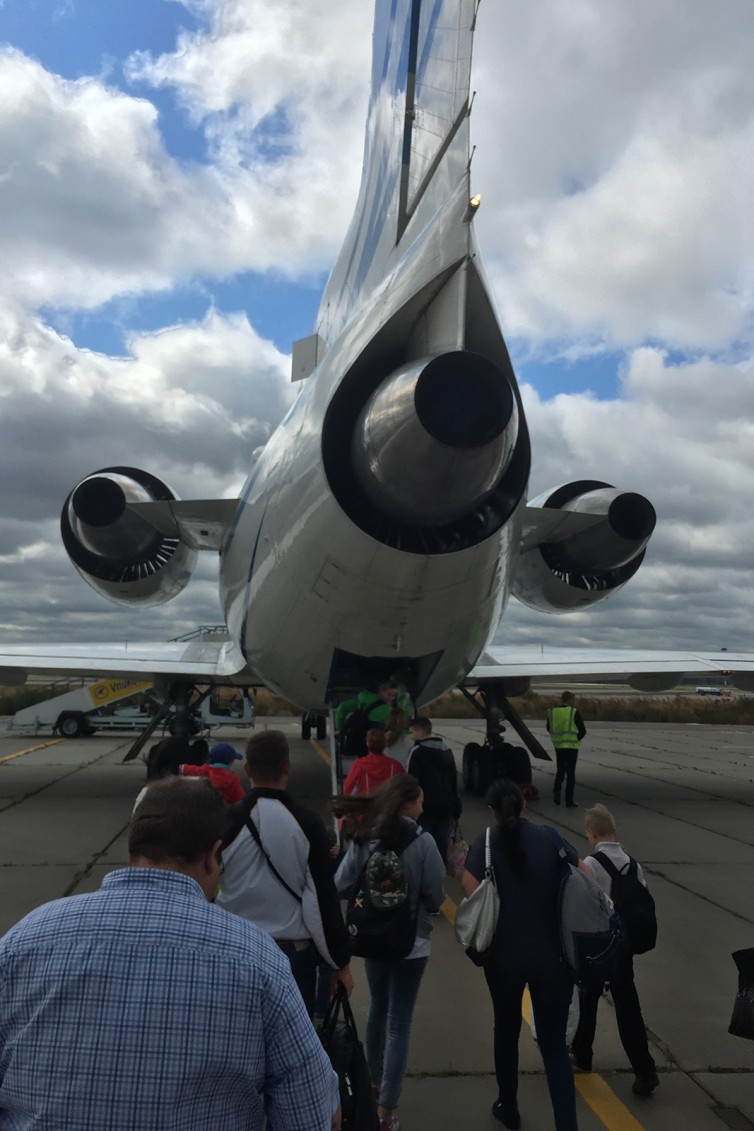 The Yak-42 series was designed to be boarded by the rear via integrated air-stairs – Photo: Bernie Leighton |AirlineReporter

We boarded, via bus, through gate 9A and initially, I had thought that our Yak-42 was hidden behind a UTair 737 out on the hardstands. I can’t recall exactly when RA-42437 was manufactured, but I am pretty sure it was some time between 1995 and 1997.

In an “if only taking pictures would not get me shot” moment, we drove from the main terminal, all the way across the runway, past the VVS VIP fleet ramp (full of not just command-and-control aircraft, but Putin’s personal fleet) and arrived at the corporate ramp. Not only was Roman Abramavich’s 767 a few feet away, there were tons of Tu-154Ms and Tu-134s. Even a strange, private, Fokker 100. Again, if only there weren’t so many signs making it clear that photos weren’t allowed!

When the bus doors opened, I decided to hang back for a few seconds and pretend I was looking for text messages. Whomever at Apple came up with the “use the volume button to take a picture” is a hero. Â I had to. When else do you get to walk up the back steps of an aircraft, especially when you are flying business class. Now yes, there were airstairs hooked up to the front door as well. The front door was not designed for boarding, but flight crew, ground staff, and one of the three other business class passengers used it as well. 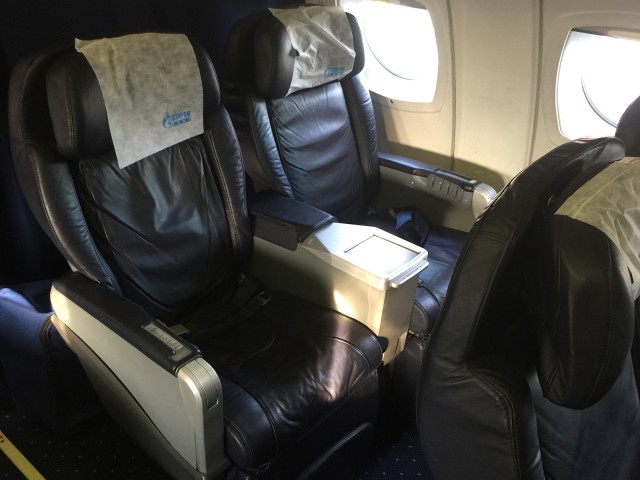 This is the Gazpromavia Business Class cabin on the Yak-42D – Photo: Bernie Leighton – AirlineReporter

Business class wasÂ actually pretty impressive. The seats are leather, the pitch in row two differs from row one, but let’s call it a minimum of about 36 inches (I’d say row two was closer to 40″). There’s about 160 degrees of recline, and even an extendable leg-rest. 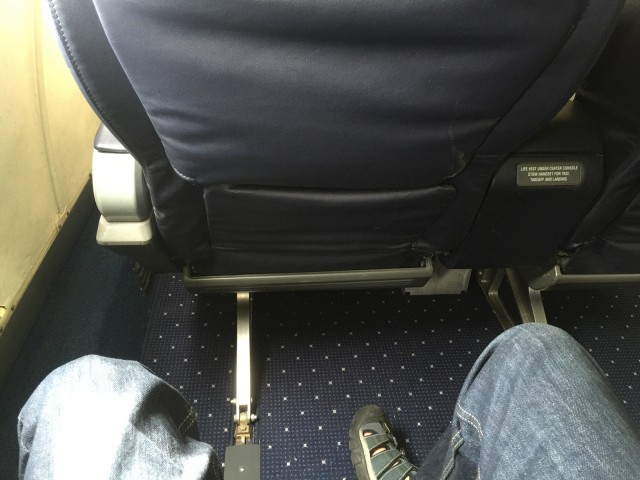 As I said before, I was in an aisle seat. It stands to reason that if there are only four people in an eight person cabin- everyone can have a window. I moved to 2A as soon as I had that realization.

Shortly after I snuck my photo — success!

Then the wonderful flight attendant came past with a whole host of things: Slippers, pillows, and blankets. How long is the flight to Ukhta? Not much more than two hours twenty, but there was no reason why one shouldn’t be comfortable. 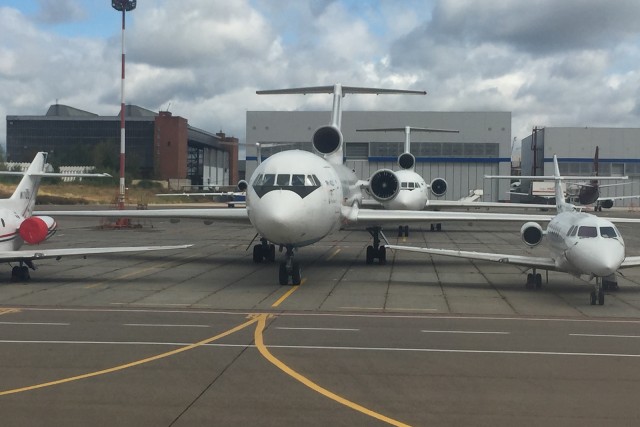 Just look at all those Gazpromavia Yak-42Ds on the ramp! I want them – Photo: Bernie Leighton | AirlineReporter

In between the pre-departure beverage and candy, I also managed to take a photo of the other Gazpromavia Yak-42Ds on the corporate ramp. I want them!

After push-back, it was time for start-up and it was… very quiet up at the front. Probably louder down the back, but this was the first Soviet airliner to be fitted with high-bypass turbofans, the Lotarev D-36. It has some Tu-154-like notes, but a much higher bypass ratio. Start up sounds kind of like a 727, but with a rotary telephone ringing in the background. 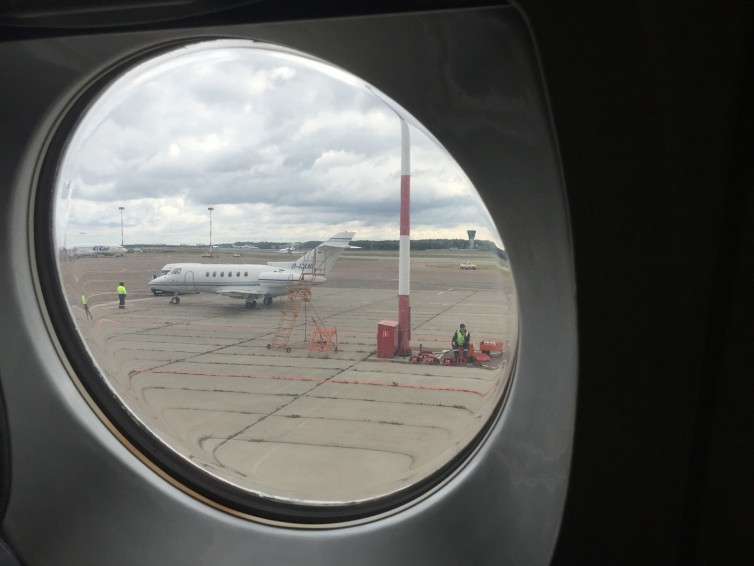 The one wrinkle in the Vnukovo corporate ramp taxi schema is that you have to sequence in after all the landing aircraft, then all the aircraft departing from the main terminal. I’ll admit, there are many airports with way worse taxi times, but it took about half an hour.

Takeoff, for a two-and-a-half-hour flight that had to tanker its return fuel, was relatively sporty and quick; a mere 40.27 seconds. Climb, however, was anemic. I now understand why Vnukovo tower made us wait until several newer Boeings had departed ahead of us.

About forty-five minutes later, when we reached cruising altitude, it was time for lunch. 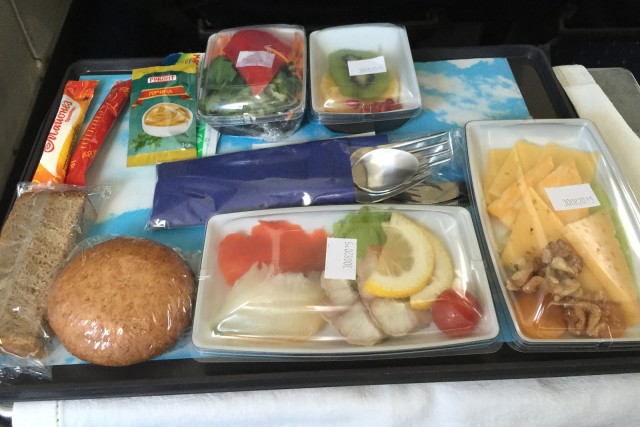 The first round of lunch aboard Gazpromavia 893 – Photo: Bernie Leighton | AirlineReporter

The first round of lunch was some sort of smoked freshwater fish, cheese, and walnuts with apricots. The catering was no Aeroflot, more on Belavia’s level. So, pretty good, but not outstanding. I think the sky blue paper with clouds on it made the experience. 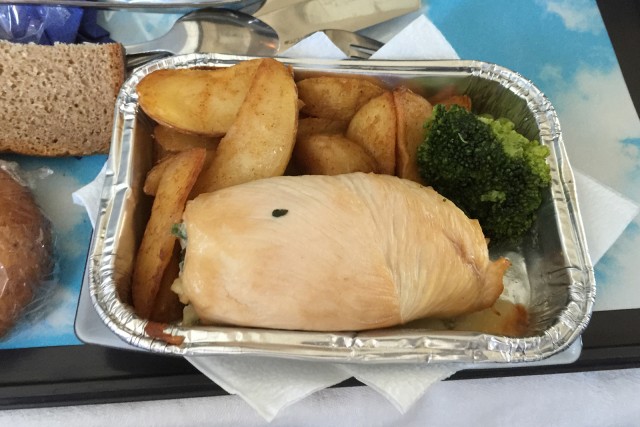 The main was a chicken breast stuffed with spinach. A little dry, but pretty tasty. The tin-foil did cheapen the experience a bit, but it’s the thought that counts, right? 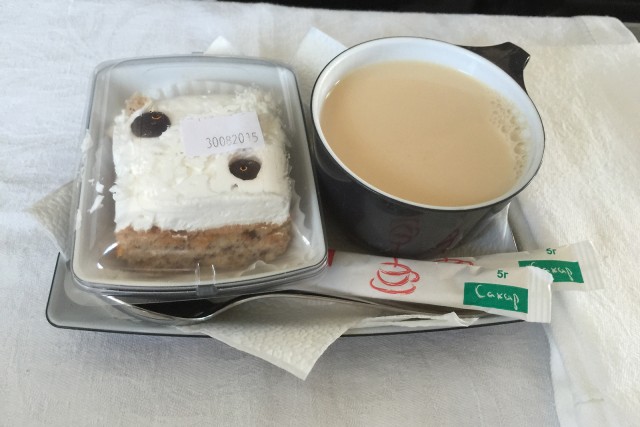 A cup of tea with some carrot cake – Photo: Bernie Leighton | AirlineReporter

Dessert was carrot cake and a cup of tea. Pretty good. Not amazing, but solid. Better than many airline desserts I’ve had in the past year.

I have no idea how the Yak-42 handles turbulence as on both sectors, there wasn’t any. Maybe the Yak is just that sturdy? Either way, after lunch, with the lack of IFE, I reclined my seat into the 160Âº recline and played games on my iPhone. I was very comfortable indeed. 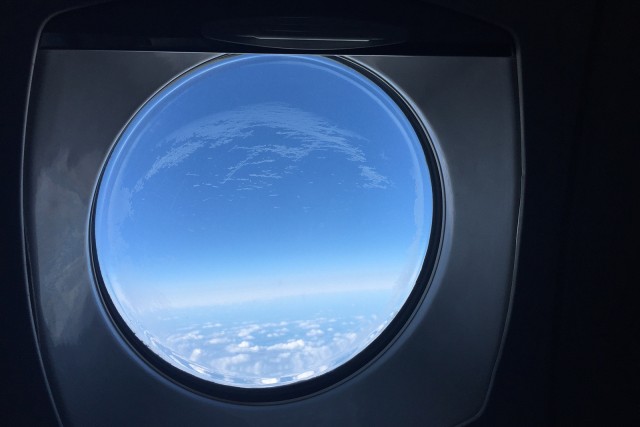 Such a great view from a Yak-42D window! Photo: Bernie Leighton | AirlineReporter

Descent over the not-Siberian forests reminded me of flying over Northern Manitoba to go see polar bears — very similar landscape.

Landing in Ukhta was amazing, and smooth — the rugged landing gear really soaked up the bumps and potholes of the aging pavement. There are at least two disused Mi-10s and at least a score of Komaviatrans Mi-8s that still seem to be in service. Amazing. 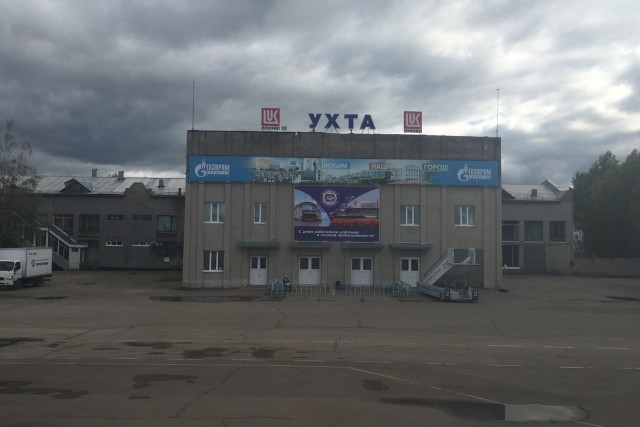 I can’t say enough great things about the Yak-42D, but they are disappearing quickly. Not many were built, and the plant where they were constructed in Saratov was demolished (along with six incomplete fuselages). If you want to fly on one, you need to hurry – make sure to bring your patience!

Bernie, as always a great read… One we can’t get elsewhere. Thanks!

RA-42437 was manufactured in 1996. russianplanes.net has a good registry for most of Russian aircraft types but only in Russian language. BTW they do not have a photo of RA-42437 🙂

A very enjoyable read Bernie! I completely agree with the almost surreal experience of wandering through Russian airports. Only for that experience, its worth the journey.
Shame one can’t come across many of those aircraft outside Russia though.
Thanks for sharing!

Great article. However the Yak-42 didnt really use anything from the Yak-40, so saying it was ‘doubled in size suggest the fuselage was stretched, this isnt the case. The Yak40 is a 3 a breast cabin and has a straight wing, so is closer to Embraer 135, in passenger capacity and 3 across cabin

My first flight was to Crimea in Ukraine with YAK-42. Don’t think I ever flew with another Russian can/tin. There are good documentaries about Russian aviation history, planes etc. on Youtube but of course they’re all in Russian.

Don’t know where Crimea Ukraine is. I know of a Crimea in Russia. Either way- have you seen the Wings of Russia series?

Comment* It is request to okb yakovlev to change the design of yak 42 and to improve the present design by manufacturing new generation plane with two power plants mounted on the aircraft wings .