As part of this years Middle East Business Aviation Association (MEBAA) show at Dubai-Al Maktoum Airport (DWC), there were over 45 aircraft on static display. Of course, there were countless VIP Boeing and Airbus jets there, however for me the highlight was the Honeywell Boeing 757-200 flying testbed. The aircraft has a rather interesting history; it started out life with Eastern Airlines in 1983 before operating for a British leisure airline from 1995-2002, before finally coming to Honeywell in 2005 after a few years in storage. As of 2008, the aircraft has completed over 400 test flights and some 1,700 flight hours in over 15 countries. That’s impressive.

This is no ordinary 757 – Photo: Jacob Pfleger | AirlineReporter

The most distinguishing feature of the aircraft is the engine mount on the forward right-hand section of the fuselage. The mount is primarily used for in-flight testing of new engines — mainly for the corporate jet market. The most notable engines that were tested and certified on the aircraft include the HTF7000 and TFE731 engines, which power the Learjet aircraft series. 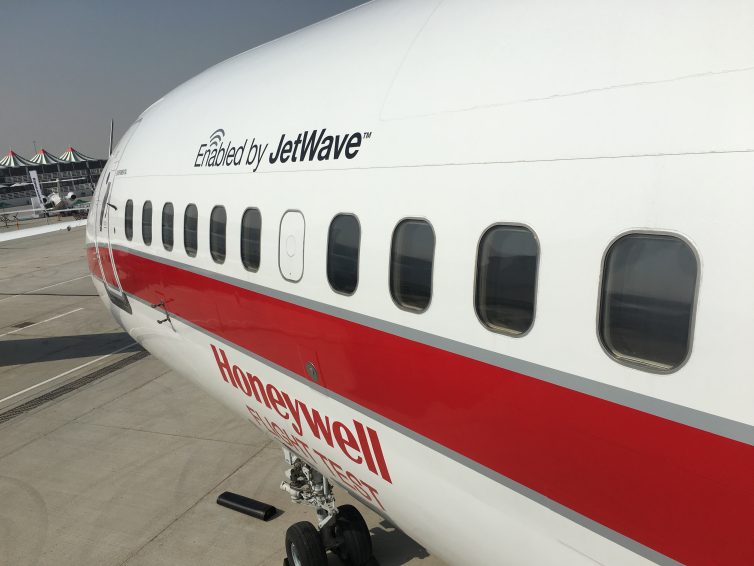 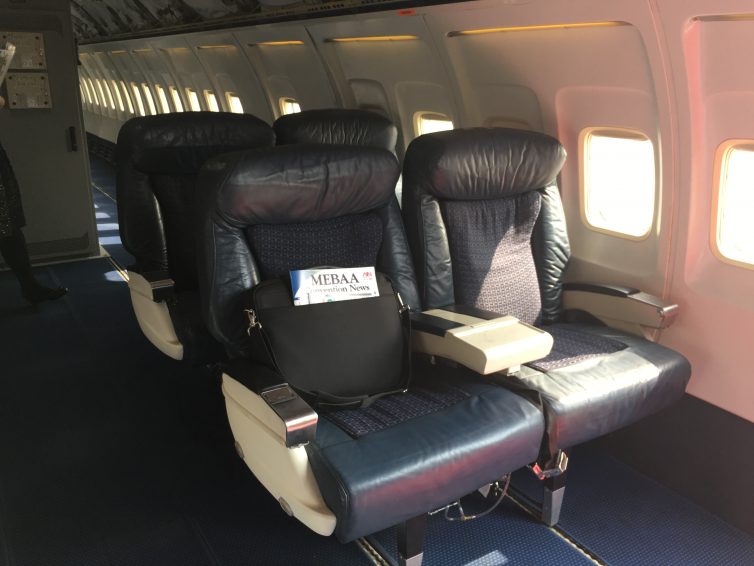 Entering the aircraft, it is already evident that this is no ordinary plane. The interior is virtually stripped bare with no cabin fit-out except for a few first class seats and the forward galley and lavatory compartment. The remainder of the aircraft is fitted out with a vast range of computers and testing equipment as well as numerous workstations. Each workstation has different role, from one that serves as the primary control for the engine tests to one that monitors various parameters and data when trialling new avionics systems etc. 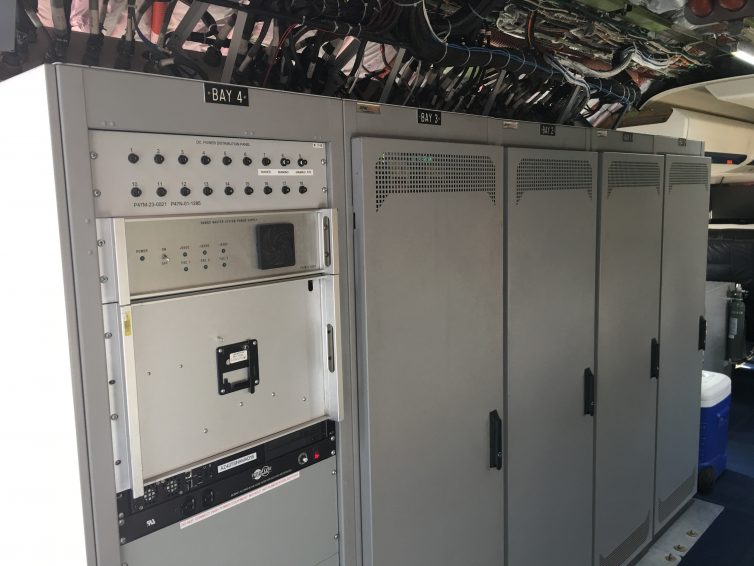 When a test engine is mounted, it is controlled entirely from a workstation in the rear of the aircraft. There is no control of the test engine from the cockpit except for a kill switch and fire bottle in a worst-case scenario. The engine is also not controlled with a classic throttle, as this is not as accurate as the turn-knob, with which it is easier to set very specific engine power settings. There is however an option to add a throttle control should it be required. 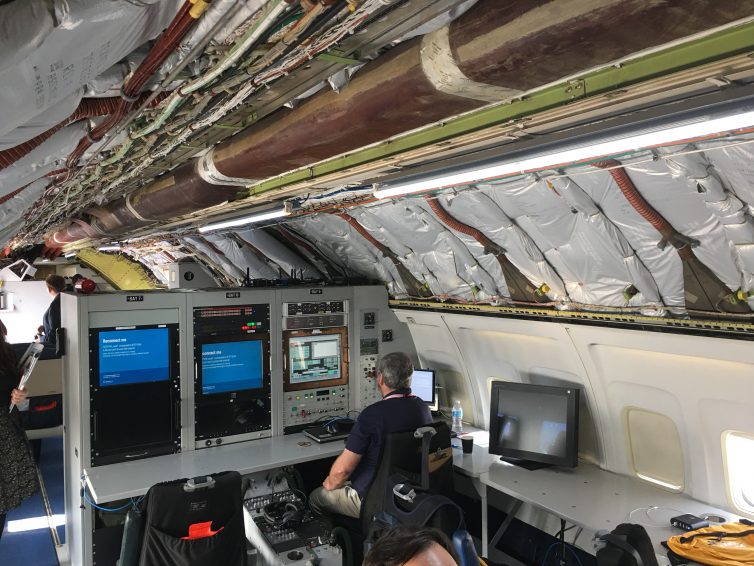 The engine test station, the engine thrust is controlled by a turn-knob rather than a conventional throttle for increased accuracy – Photo: Jacob Pfleger | AirlineReporter

Of particular interest is the fact that the aircraft is almost always flown by hand; the autopilot is seldom used. The primary reason is that when testing the various systems, hand-flying the aircraft provides a more stable flight attitude. Most tests are often conducted at slow speeds where the accuracy and reaction of the autopilot to be able to maintain straight and level flight is often delayed. 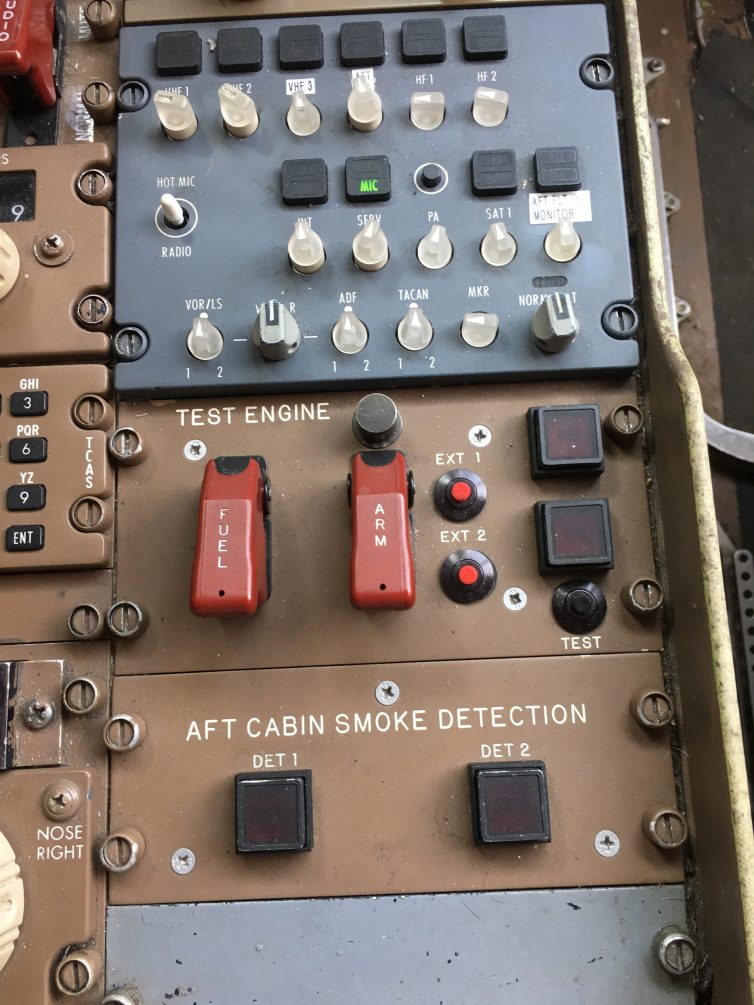 The only cockpit control for the test engine is a kill switch and fire bottle – Photo: Jacob Pfleger | AirlineReporter

Interestingly, when an engine is being tested in-flight there is surprisingly little thrust offset and only minimal compensation is required to offset any of the effects. In the forward section of the aircraft, it is also interesting to see the test engine pylon mount, something which you certainly do not see everyday in an aircraft.

The cockpit is a standard 757 fit-out except for the addition of the test engine kill switches on the pedestal. 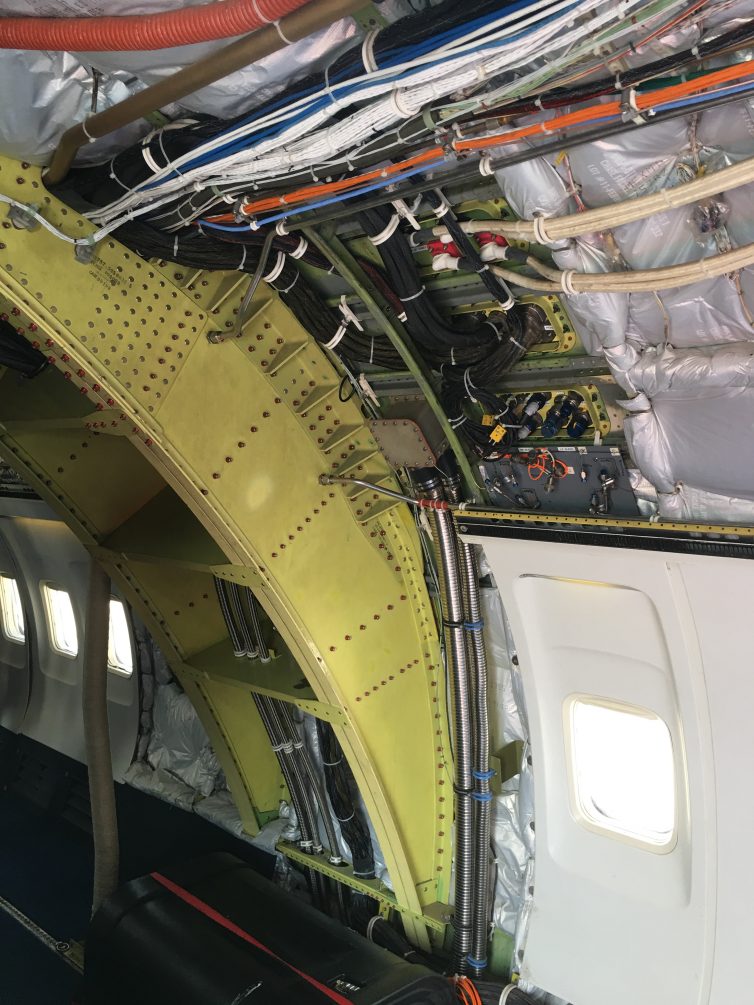 The test engine pylon mount as seen from inside the cabin – Photo: Jacob Pfleger | AirlineReporter

The Honeywell Boeing 757 testbed has certainly helped with developing and implementing some crucial lifesaving equipment such as the terrain and collision avoidance systems which Honeywell claims has reduced the rate of a fatal accidents caused by either from 1-in-3 million to over 1-in-20 million.

It will be interesting to see how the aircraft will serve its purpose over the next 10 years given the ever-evolving avionics systems and in-flight connectivity developments. 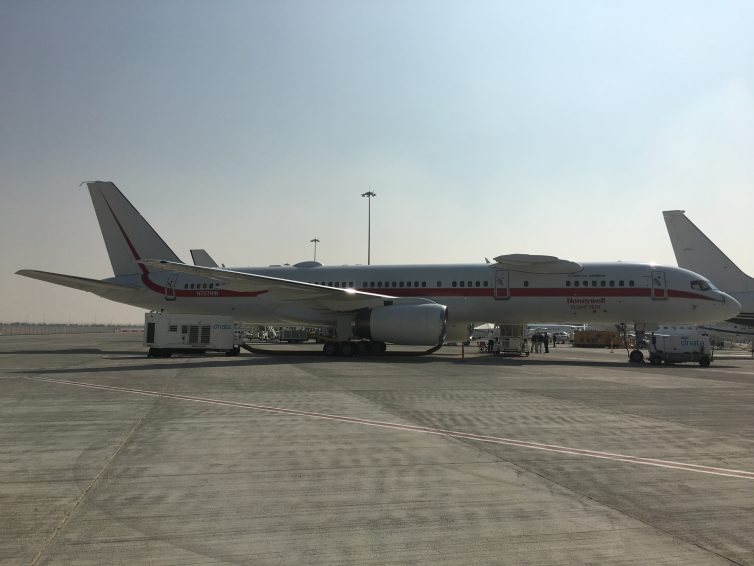 With ongoing developments in avionics and in-flight connectivity, it will be interesting to see what the next 10 years will bring for the Honeywell Boeing 757 – Photo: Jacob Pfleger | AirlineReporter

Thanks for the great article!
Even as a VVVVfrequent flyer, I would never get to see a plane like this!
Great!!!

Great story on our 757 Testbed Aircraft. Will let you know when we’re in your area next year, knowing you have an open invite to come flying with us.