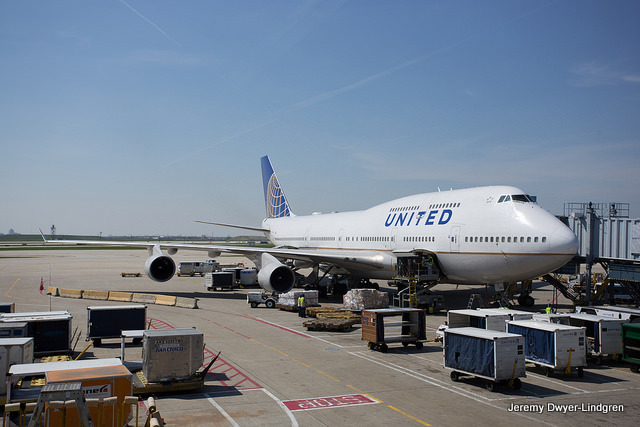 Two-year-old me hated every last waking moment of my first flight. And, according to my parents, I made sure everyone within earshot knew it. My blood-curdling screams, which I’m told lasted most of the flight between Boston Logan and Minneapolis via Detroit, were endearing enough to encourage many of my fellow fliers on board to pick up and find somewhereanywhereelse to ride out the two-hour living hell (Editor’s note: Jeremy still reacts similarly today). 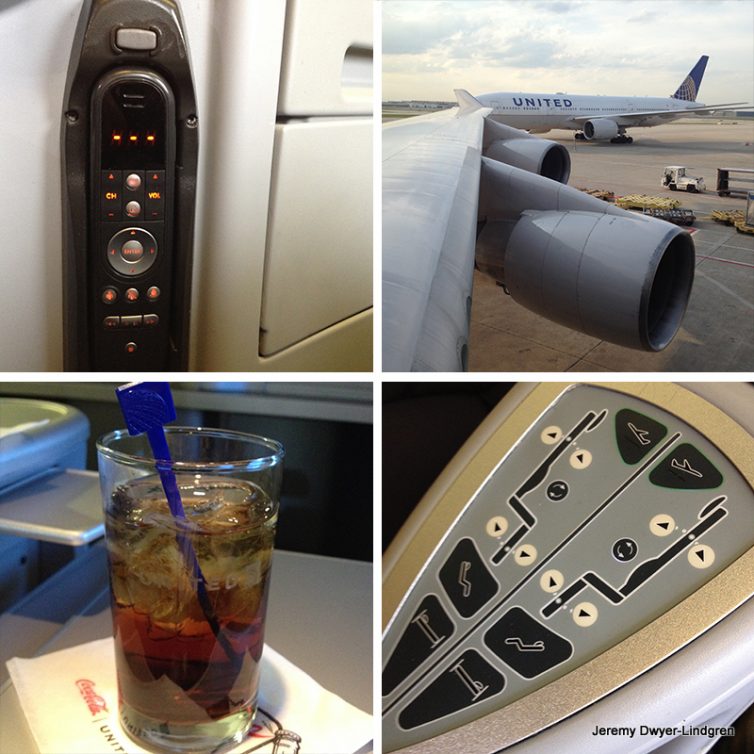 Odds and ends from the flight

Curiously, my parents recall that a few of the really lucky fliers escaped to a bar; an upstairs bar, they say. I’ve never been able to prove it, but based on that little tidbit along with some research, my first flight was very likely aboard a Northwest Orient Boeing 747.

Which is so cool, except that I don’t remember a damn thing about it. And my parents, not being AvGeeks, didn’t even think to take a single photo of the cabin layout, or this alleged bar. The upstairs bar, if you recall. 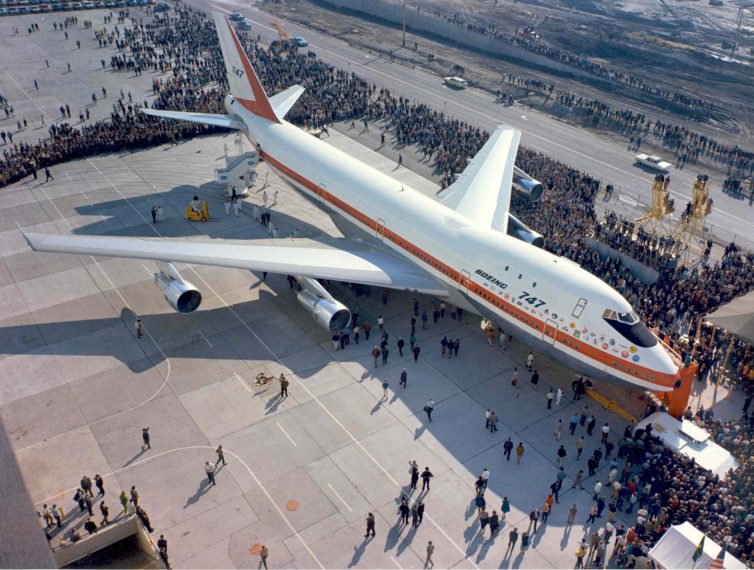 Of course, even then riding a 747 domestically wasn’t terribly common, part of why I wish I could remember it. Rarer still would’ve been a bar on the upper deck, a feature that by the time I took that first flight in 1987 had mostly (if not entirely) disappeared.

BONUS: Flying Economy in a Lufthansa Airbus A380 – Upper Deck

They came in a variety of forms. There were the hub-to-hub routes, like Chicago to Miami on Eastern, New York to Minneapolis on Northwest Orient, or St. Louis to Los Angeles on TWA. There were oddball routes like Chicago to Cleveland (United) or, apparently, Boston-Detroit. 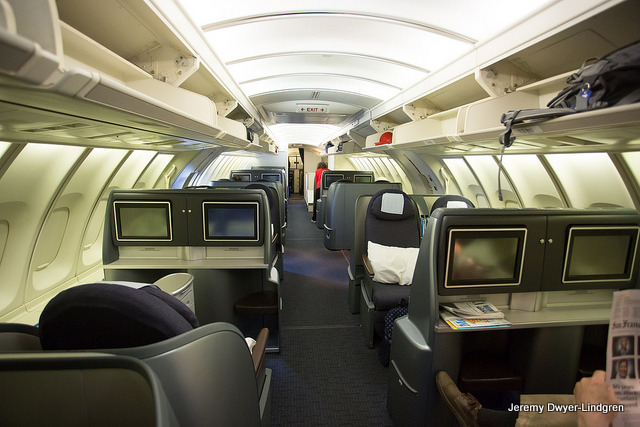 No lounge. No piano. But a sweet space to fly.

And there were the more predictable transcontinental routes, which were perhaps most common with United. The airline ran its early 747-100s, complete with upper deck bar and lounge, on Los Angeles and San Francisco to New York and Boston, among others.

Odds were pretty good that if you pulled a 747 for your flight in the early ’70s it was going to be a pretty decent experience. Several airlines, including United, had lounges on at least one deck. American even had a piano bar, complete with a real, live pianist. Those days were apparently so legendary that folks keep talking about it to this day as the “golden age” of commercial air travel.

BONUS: Flying on the Upper Deck of a Lufthansa Boeing 747-8I

But times changed. The on-board lounges were among the first things to go. Popular they sure were, but money-making they most certainly were not ’“ especially after deregulation. As new operating realities settled in, new jets like the Boeing 767 entered the scene, the capabilities of the 747 increased with new models, and the jet found its stride not in flying between New York and Chicago, but in the intercontinental routes that have since defined its legacy. 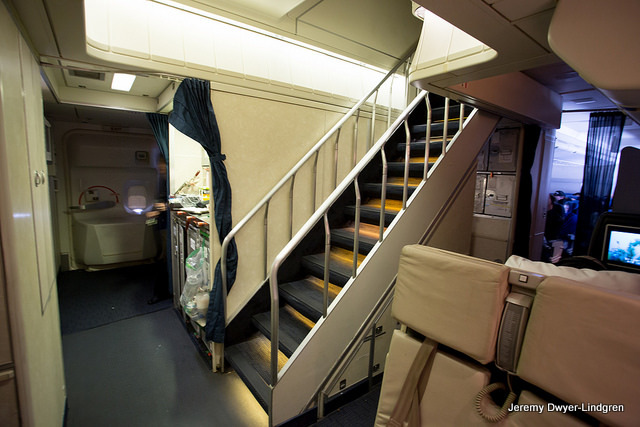 Going to the 747 upper deck

Fast-forward to 2016, and the 747 has transitioned from the ubiquitous queen of the skies to an endangered species. If you want to fly from San Francisco to Chicago, get ready for it to be on a tired A320 or a cramped 737. If you’re lucky you might pull a 767, and maybe even a 777.

So you can imagine my surprise when I stumbled on United running a 747-400 between San Francisco and Chicago for several straight weeks earlier this year. I double checked the flight number, and discovered that it wasn’t a fake or a regular swap: it was the real deal, and I had to do it. 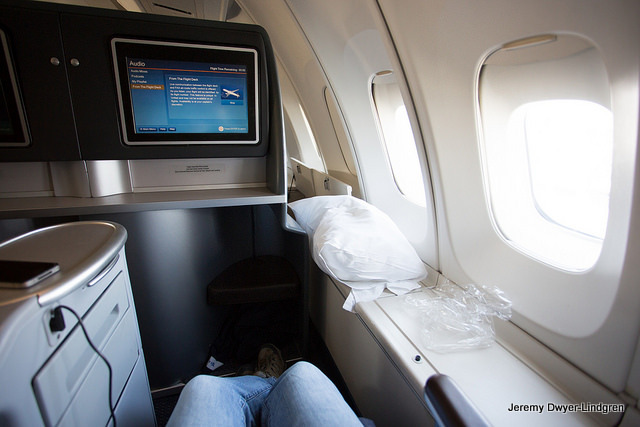 My space for the flight

I booked coach tickets for a Seattle-San Francisco-Chicago and back itinerary, after which United was generous enough to upgrade the 747 legs to business class for the purpose of this article…score.

Several weeks later it was time to fly, and I touched down at SFO on a clear and cool April morning. The star of the show was parked at gate 86, located at the far end of terminal three. Nestled amongst a sea of A320s and 757s, its size made it conspicuous at a glance, especially since the jet is usually cozied up to the international terminal gates.

Boarding, thanks to being in business, was quick and relatively painless; which was great, because I wanted to spend as much time as I could soaking it all in on board. 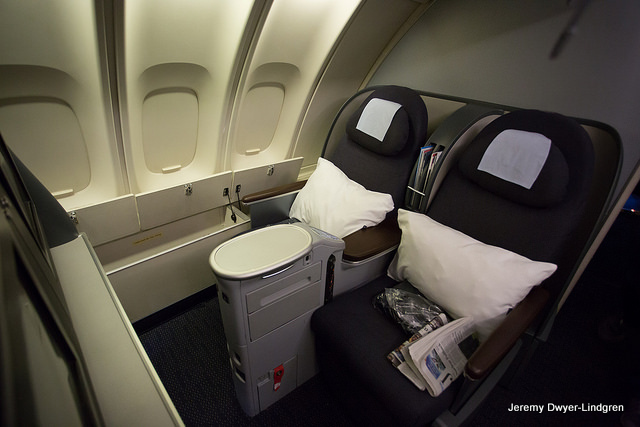 Some of the seats on the upper deck

Today’s seat was 13A, located on the elusive, exclusive upper deck. No, there may not have been a 270-degree lounge chair, buffet, and smoking up there, but the 20 seats in a 2-2 business class-only configuration was about as good as it gets these days.

As an added AvGeek bonus, all odd-numbered rows in business face aft, which included mine in lucky 13. That certainly made watching the engines work on departure a whole lot easier. Other than that, it was really just a peculiarity that you wouldn’t notice if you weren’t looking out the window; but it is cool to do nonetheless.

Once the seatbelt sign came off it was time to do some exploring, during which it became obvious that I wasn’t the only AvGeek on board. At least half of a dozen others were likewise roaming about the cabin, busily snapping pics while trying not to get in the way of the flight crew (who appeared to find this either very annoying or very endearing). 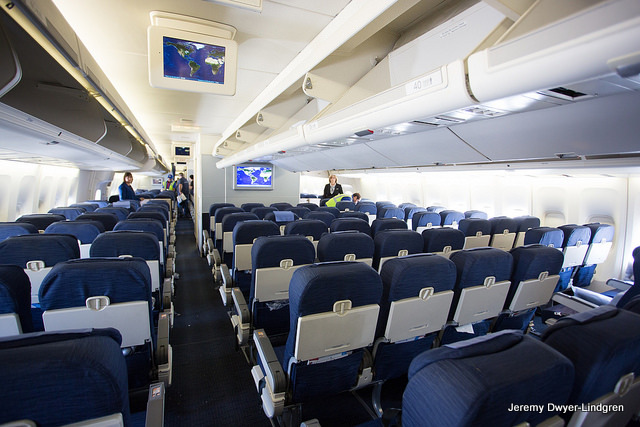 It didn’t take long to find a number of charming anachronisms on board (remember, most AvGeeks don’t find these annoying, we find these endearing). Some were easy to spot, like the overhead monitors in coach trying to pass as legit in-flight entertainment (IFE) in 2016. 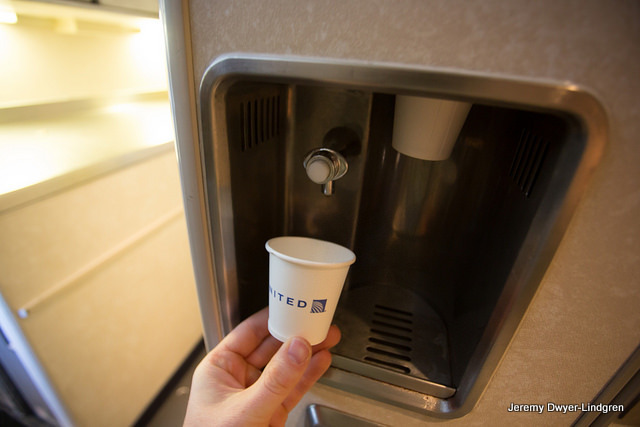 Others were harder, like the water dispensers sporadically located throughout the cabin and dutifully stocked with tiny United-branded paper cups ’“ no, I didn’t take a sip. Another good one was the discovery of several Airfones, which, despite the odds, continue to live on.

Figuring breakfast was due soon I retired to the upper deck and settled into my seat. One of the best perks of flying wide-bodies domestically these days is that you get the benefit of the airline’s generally better international product, instead of the standard domestic seats. 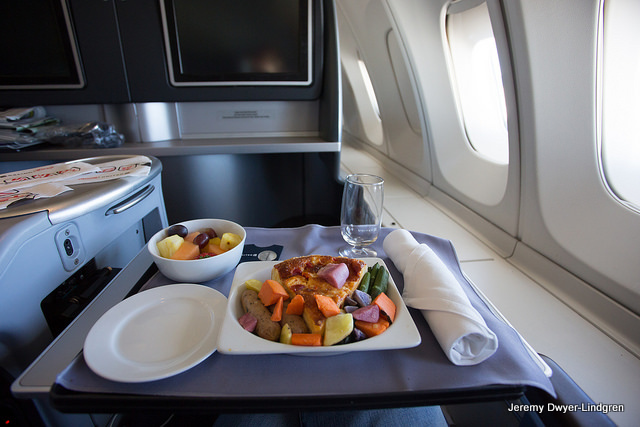 My meal was high-end for a domestic flight

In economy that didn’t seem to make any difference ’“ in fact it seemed to be worse. But up in business it was a very different picture: lie-flat beds, 76 inches of pitch, giant IFE screens, and complimentary booze. No glorified barcalounger here. The plane even had United’s increasingly elusive Global First up in the nose.

The service was otherwise not terribly different, I imagine, from domestic first class on any other plane serving the route that day: decent meal, cloth napkins, attentive crews, real silverware, and glasses with the United logo on them. In-flight entertainment was free. 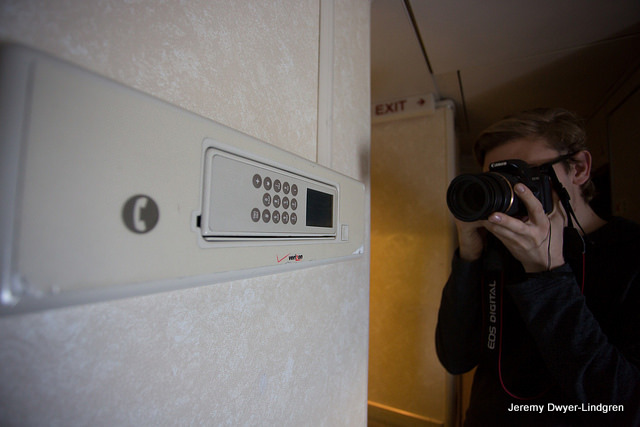 A phone from another era

After breakfast I set the seat into a nice lounge position, cozied up to a snifter of child water with lemon, and tuned in to Channel 9. The rest of flight went by quickly — too quickly — and in no time the plane was back on the ground and pulling up to gate C16 at Chicago O’Hare.

I dare say it, but flying aboard the 747 on the upper deck is about as close as one can get to those good old days from the ’70s. I know, I know ’“ those fancy A380s have bars, lounges, and even apartments on board. And don’t get me wrong ’“ those rides are sweet, but the whale jet doesn’t have the same nostalgic appeal that flying aboard the queen does. 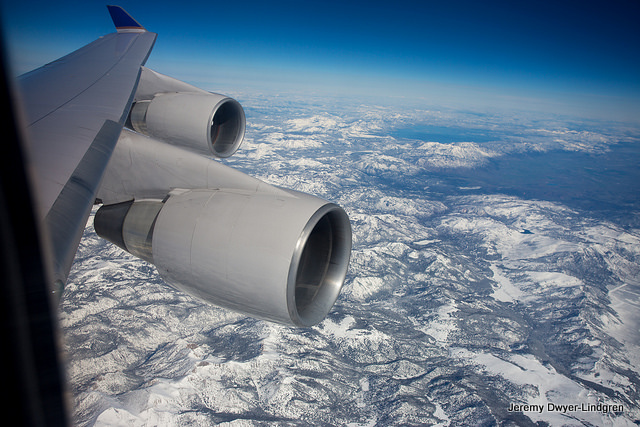 Looking out the window is always great IFE

Even though it isn’t what it used to be, with the buffets, electric pianos in coach, and apparently Henry Winkler before he became famous, flying aboard the 747 is still special. Its iconic profile and decades-long reputation as thee airplane among the flying public has lent it an untarnishable sense of romance. It’s almost a state of mind, too, a connection back to those early days when the queen busted onto the scene and changed commercial air travel forever.

Unfortunately, though, the run of the regularly-scheduled 747 on domestic routes is already coming to a close. The odds that it will be back, even for occasional smaller windows, is decent, but time is running out. United plans to retire the jets by the end of 2018 — Delta will be even earlier.

Glad you got to listen to Channel 9 Audio from the Cockpit! One of the simple things that used to make flying on United fun. They seem to be phasing it out entirely.

Just curious, why are they flying this type of capacity on a domestic route?

Good stuff Jeremy. A Jumbo on a domestic route is a rare thing indeed. Good to hear you got shuffled to the upper deck too!

Delta’s retirements are already ongoing – N661US was recently retired to their museum, and don’t look now, KLM just announced their 747-400 phaseouts, due in 2020.

That was terribly entertaining, Jeremy!
Great nice crisp pictures too!
You had me when you said “Looking out the window is always great IFE”. Especially when that view includes the 747’s nacelles & turbofans over a picturesque landscape. The stuff of Instagram legends!!!

I flew from ORD-SFO and return a couple weeks ago for that very same reason. In fact I was also in 13A for both flights! Sad to see the queen go.

Todd Ferrell, it’s mostly simple aircraft positioning and rotation of equipment for the Asia routes. It makes more sense to include it in scheduled service and sell seats on it instead of simply ferrying it empty.

I flew BA 747 back from London to Newark about 19 years ago. I was the last person to check in the womenat the gate mentioned it must be my lucky day. I got upgraded to the upper deck. I couldnt believe it. When the plane landed i didnt want to get off.

That there i believe is lake tahoe! I just flew out of san fran to see that view. I wont soon forget it. I was aboard a 757 though.. Not as impressive as it would have been aboard the
747!

I’m flying SFO to ORD in March and I tried looking to see if United was flying the 747 on that route but I didn’t see anything. Any other way I can check to find out what flights they are using the 747s on so I can book that flight?
Thanks