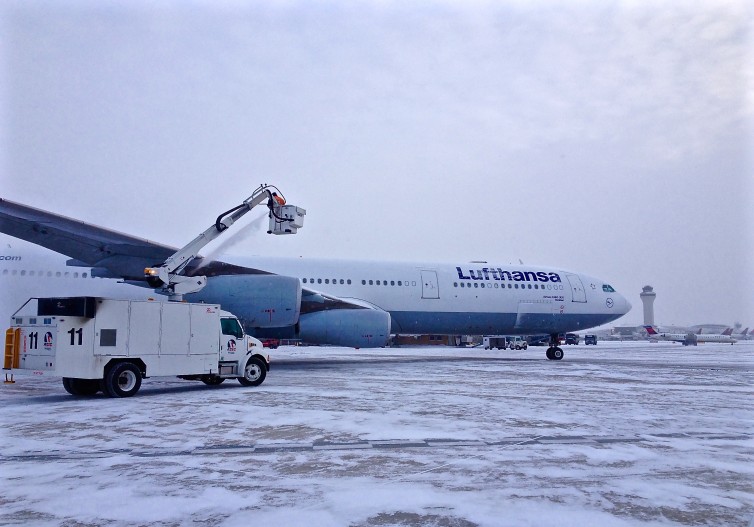 A Lufthansa A340 gets prepped for flight at the airport during snow – Photo: Andrew Poure

You’re sitting on a airliner preparing to depart from a major hub in the U.S. midwest, staring out the window. On a clear spring day, you’d pushback and be off the ground in moments, and see the shining Great Lakes and expanses of green fields and trees immediately after takeoff. That day is not today.

No, the scene out your window is white and grey as far as the eye can see. Amber and red strobe lights, from both aircraft and ground vehicles, add to the almost surreal landscape. It’s winter in the northern states. 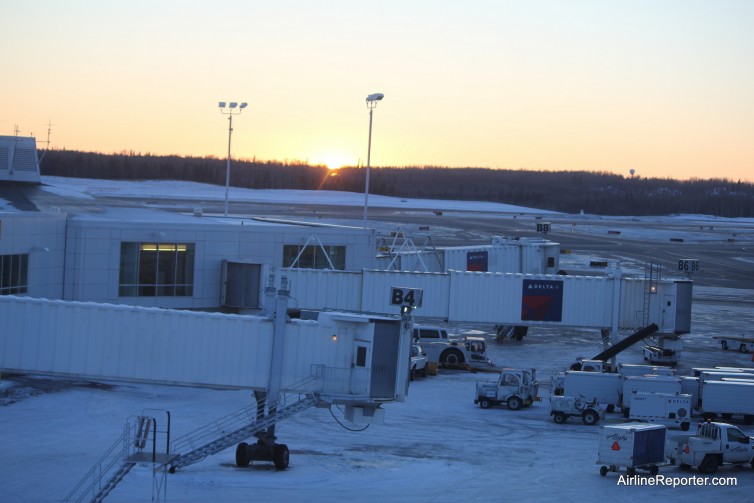 Up front, your pilots intently listen in on two frequencies on the radio: airline ramp control, responsible for push-backs and gate coordination, and one even more specialized channel: the deicing control frequency. Amidst the chatter are pilots, ramp agents, tower personnel, and others all racing to solve a dozen different problems around the ramp, most of which can be blamed on cold and snow.

The captain picks up the PA microphone. ’œGood afternoon folks, it’s gonna be a little while before we’re able to push-back for departure. Please take your seats and we’ll get moving as soon as we can. We’ll keep you posted.’

We all know winter weather is a major driver of flight delays and challenges for airlines, but what exactly are some of the things happening at the airport that keep your plane sitting on the ground those extra minutes when the flakes are flying? 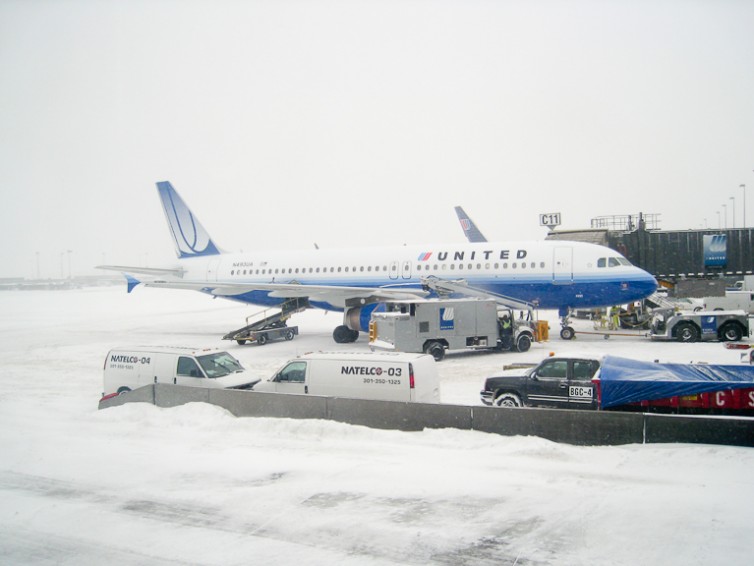 Snow can cause turmoil for passengers at the airport – Photo: Jess J | Flickr CC

If you’ve flown in winter weather, you’ve seen it. Deicers are there to ensure that there’s no frozen contamination, be it frost, ice, or snow (or all of the above) on the critical surfaces of the aircraft, from the wing tips to the top of the vertical stabilizer.

Deicing fluid – the reddish, steaming liquid heated up to 180 degrees – is used to melt and knock off contamination. When snow or other frozen precipitation is ongoing, step two is anti-icing fluid, the bright green goo you’ll see covering airplanes as they taxi to the runway. This thick substance prevents new accumulation from forming on the aircraft, and can provide a ’œholdover time’ of 45 minutes or more; especially vital at larger airports where taxiing to the runway and waiting for takeoff can be long even in good conditions.

Deicing is critical to safety, as an aircraft is quite simply not designed to fly with any foreign contamination on its wings and tail, and the harsh reality is that there are a number of NTSB reports out there that will spell out exactly why you don’t want to go with the alternative. 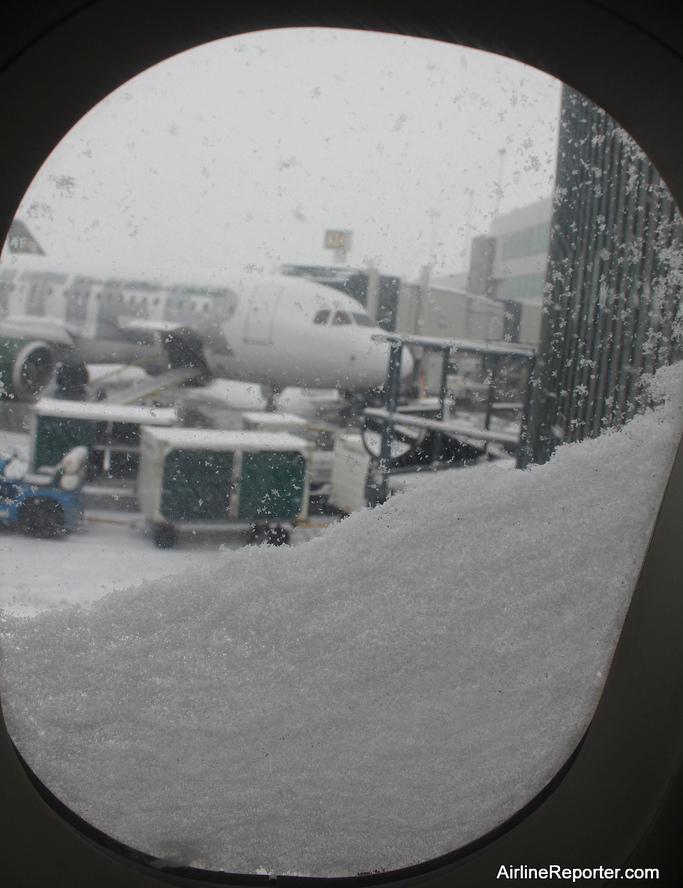 Snow in Denver, covering the window of this Frontier Airbus A320 – Photo: David Parker Brown

WINTER AIRPORT OPERATIONS: On the Ramp

Anybody who has spent time living in cold winter climates will tell you that everything slows down in the snow and bitter cold — particularly things with wheels. Baggage carts, pushback tugs, fuel trucks, catering trucks; all of these vehicles and more have to keep moving from plane to plane preparing each flight for its next departure despite adverse conditions. Vehicles get stuck, engines won’t turn over, and even fuel hydrants freeze over. Sometimes it comes down to using the heat carts meant to warm aircraft cabins, or even deice trucks, to thaw out various ground equipment. 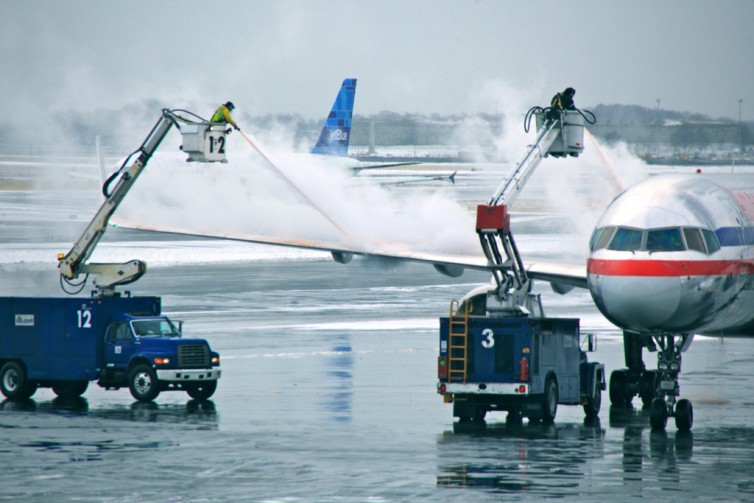 Another piece of the puzzle is the expanse of concrete and asphalt that makes up a commercial airport. Airports accustomed to snowy winters have refined the snow removal process over the years; equipment including plows, brushes, and blowers, as well as combination units consisting of all three in one vehicle, are used in teams to rapidly clear runways and taxiways. Airports with multiple runways can fare better in snowy conditions by alternating between active runways and those next up for snow removal. In addition, larger airports often employ contractors to handle gates, service roads, and other ’œnon-movement’ areas where expensive equipment and expertise meant for runways isn’t necessary, allowing all areas of the airport to get proper attention. Snow and ice removal plans at U.S. airports are evaluated and approved by the FAA, which can, and has, fined airports when they fail to adequately maintain a safe snow- and ice-free environment for aircraft to operate in. 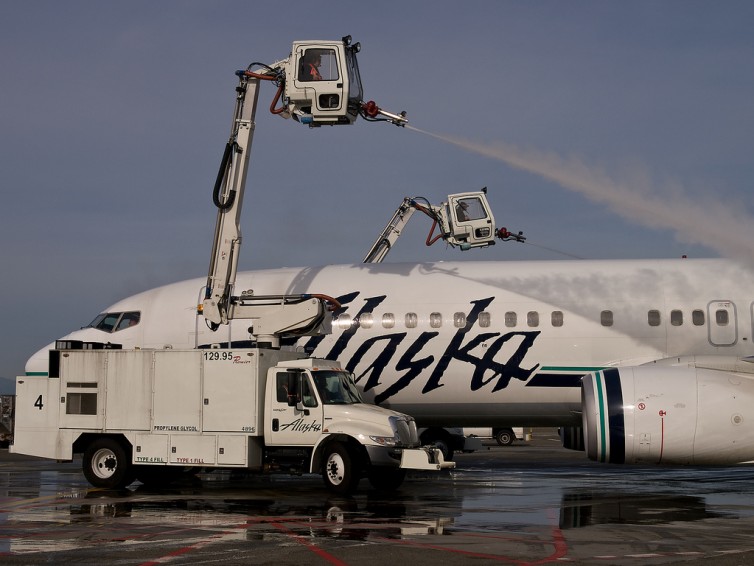 An Alaska Airlines Boeing 737 gets deiced in Seattle – Photo: Michael B | FlickrCC

In addition to the frozen ballet being carried out on the ground in the elements, other aviation professionals have to work harder, too. Air traffic controllers have an added layer of complexity in extreme winter weather, and airline operations personnel, both in the airport and at headquarters, have the burden of ensuring every passenger, every bag, every package, and every airplane gets where it needs to be despite mother nature’s efforts.

All of these different groups have to interact correctly to keep the air travel machine running smoothly, and winter weather is one of the biggest challenges commercial aviation facesand overcomeson a regular basis.

While nobody likes flight delays, it’s always a good idea to take a moment and think of all the people braving nature’s fury and working hard to keep you on your way to your destination in a timely manner safely.

This story was written by Andrew Poure (@apoure25) for AirlineReporter. Andrew is a lifelong AvGeek, and is currently beginning a career in commercial aviation with a home base of Detroit (DTW). He has a particular passion for the technical side of the airline business, but can feel right at home in any aviation-related discussion.

Cheers and thanks for contributing to Airline Reporter.

Timely piece! I can’t complain when my flight gets delayed because the Ice Man Cometh and has to green goo our aircraft. Was in MSP in late November for the year’s first snowfall and was amazed at the coordinated efforts, especially among the plow crews. Watching fleets of plows and brooms whisk along the runways and taxiiways, I couldn’t resist but hum the theme to the original “Airport.” GET ME PATRONI!!!!

Thoughtful and appreciative piece Andrew! Being a lifelong airport geek I always enjoy seeing articles that open up the “complexities and highly collaborative orchestra of Winter Ops” to others. Now all we need to do is get this type of explanation on-board and in front of the passengers while they’re also hearing about seat belts and exits.