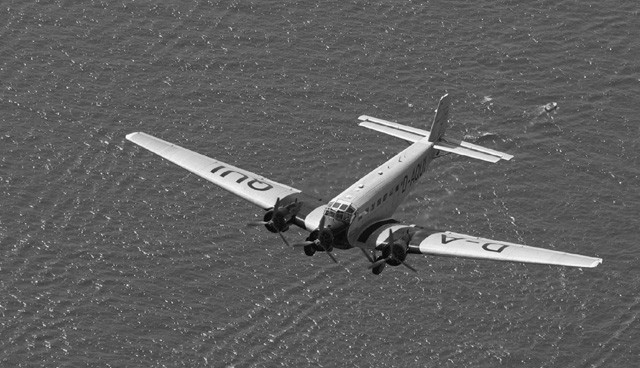 The Ju-52 flying over waters outside of Berlin – Photo: Lufthansa

Of course, a plane of this stature is going to have an impressive history. The Ju-52 first flew in 1930 and 4,845 were built until production ceased in 1952. At first, the Ju-52 was mostly used for commercial purposes, hauling cargo or configured to fly 17 passengers. Then, with most similar aircraft of the period, it was pulled into war-time service before returning to passenger use. In the end, the Ju-52 flew with 30 airlines in 25 different countries and had a very successful career. 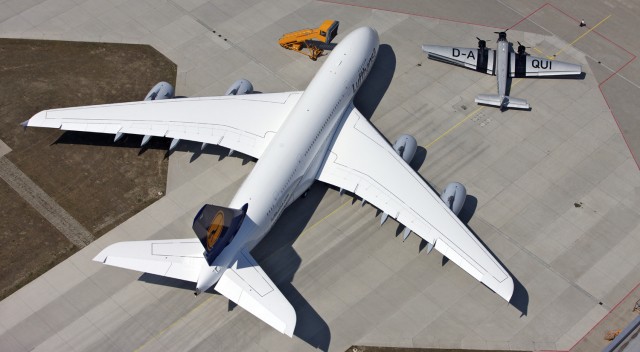 Commercial aviation has changed just a bit. The Ju-52 parked next to an Airbus A380 – Photo: Lufthansa

The plane that I flew on was built in 1936 at the Junkers plant in Dessaue, and has had a few loving names, including “Tante Ju” (Auntie Ju), “Grande Dame of the Skies,” and also just “old-timer.” I called it “beautiful.”

This plane was in service with Lufthansa, and then in 1955, it was retired… or so they thought. Originally set to go to a museum in Oslo, the plane was instead sold to South America, where it flew in Ecuador from 1957 to 1963. Auntie Ju was then put out to pasture until it was purchased in 1969 and flown at air shows. Lufthansa purchased and started restoration in 1984, and the airliner was re-introduced to the world in 1986.

Today, it largely displays the original registration of “D-AQUI,” but the actual operation reg is D-CDLH (which you can see below the tail in much smaller letters). 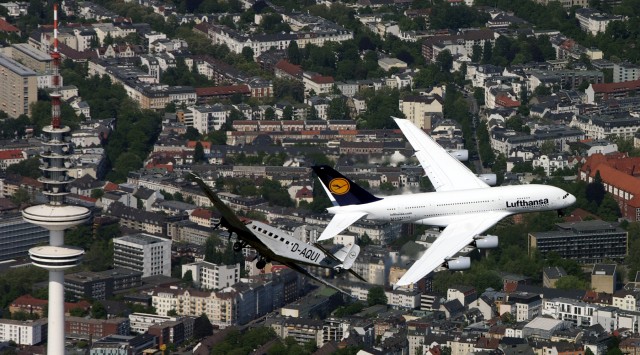 The Junkers flying in formation, with an Airbus A380 over Hamburg – Photo: Lufthansa

Just recently, on August 22, the plane was placed under protection by the Office of Historic Monuments of the Hamburg Cultural Authority. “The Tante Ju is of great aviation-historic importance, being one of the last and well-preserved examples of a novel motorized aircraft type in regards to its construction, which at the time was a big seller and success model,” Dr. Christine Onnen of the Hamburg Office of Historic Monuments explains. It was to celebrate the great efforts, by many, who have kept the aircraft flying for so long. 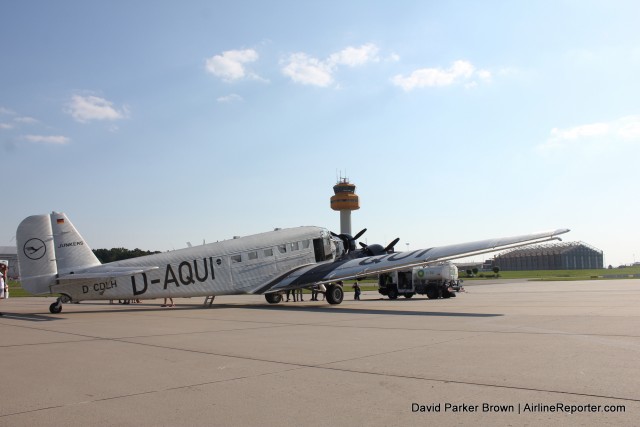 The Hamburg tower is off in the distance

And the plane flies… a lot. During the summer months, it will fly around 9,000 passengers annually, mostly on sightseeing tours over Germany and Austria.

During my visit to Hamburg, the weather was… well, almost perfect. Sunny, a little breeze, but not too warm. A perfect combination to go flying. Our flight group consisted mostly of invited media and Lufthansa employees. We had old-style paper tickets, went through security, and waited at a gate, just like a normal flight. 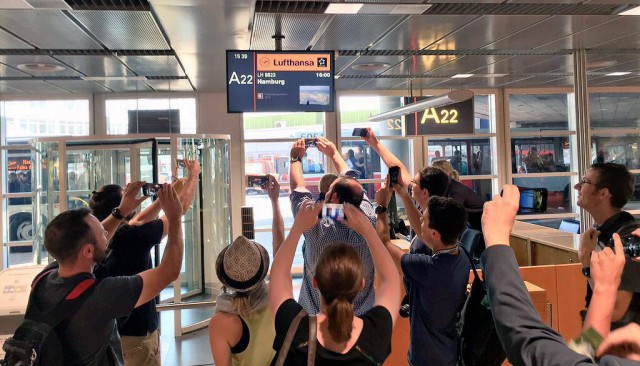 Yea… you might say we were all a bit excited – Photo: John Walton

We waited around and became excited when our flight (Hamburg-to-Hamburg) showed up on the screen. Soon, we loaded up on a bus and drove to the waiting Ju-52. I can’t lie that I got goose-bumps walking closer to the plane and realizing that we were soon about to take flight. 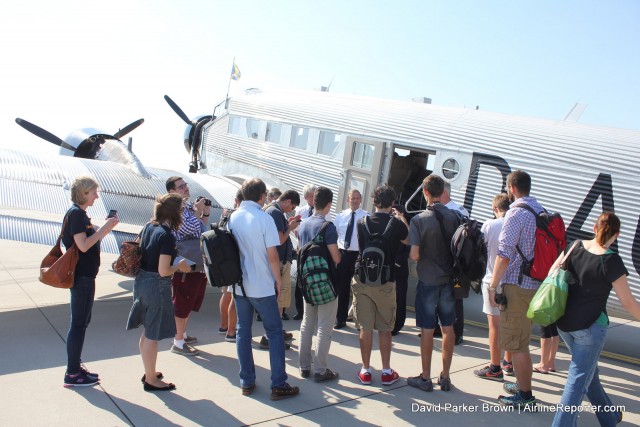 Our group anxiously awaiting to board the aircraft.

After an introduction of the crew and being given a bit of information on the plane, we were told we could board. We were all AvGeeks and, lucky for us, every seat was a window seat! I found my place, on the left-hand side of the plane, and took in my surroundings. 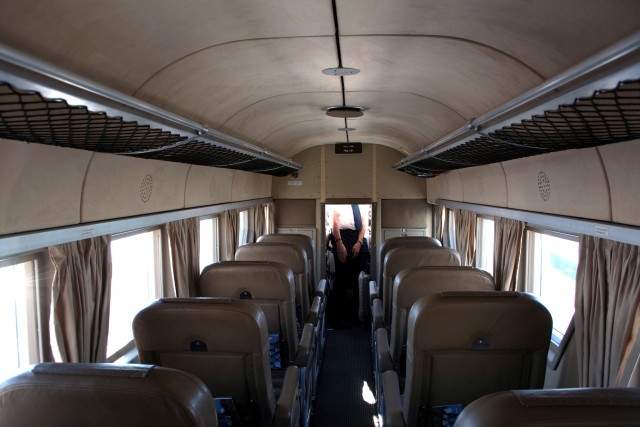 The interior of the Ju-52 – Photo: Jason Rabinowitz

The plane looked, felt, and smelled new. Not only was it impressive that this aircraft is 79 years old, but the fact that it flies so many people and it is still kept in great shape is amazing. From the suede-like ceiling to the custom seat designs, all the classic details were there. The leg room was pretty bad, but who cares? 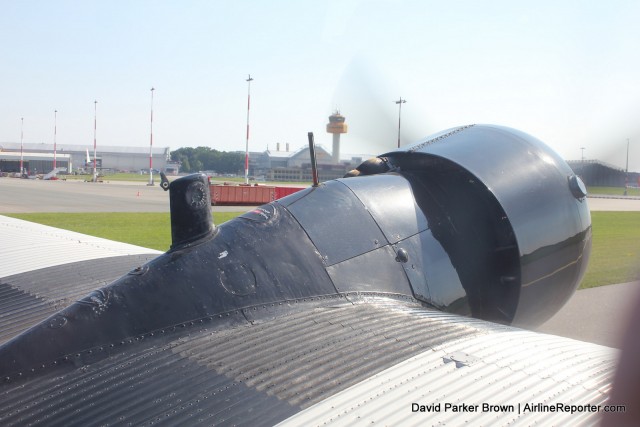 One, two, three engines start up.

Listening to the start-up of any prop aircraft is intoxicating. Listening to the three engines start up on the Ju-52 was just plain amazing. After the engines warmed up, we started our taxi to the runway. The amount of excitement, from all of us on the plane, bordered on insanity, but that was a good thing. 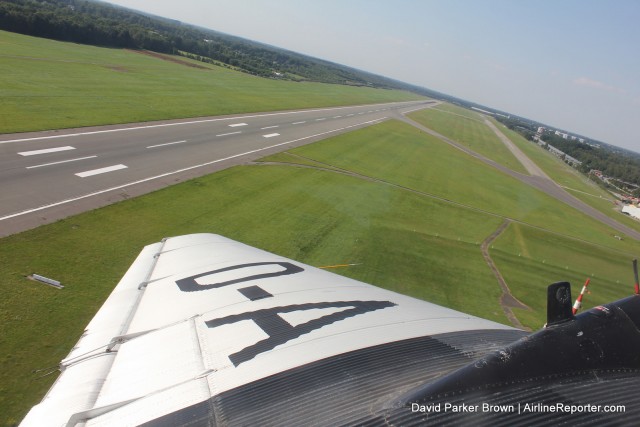 And we have liftoff! from Hamburg.

We lined up, the engines went to full power, and we were off. It didn’t take long for us to lift off from the ground and start to see Hamburg from a different angle. 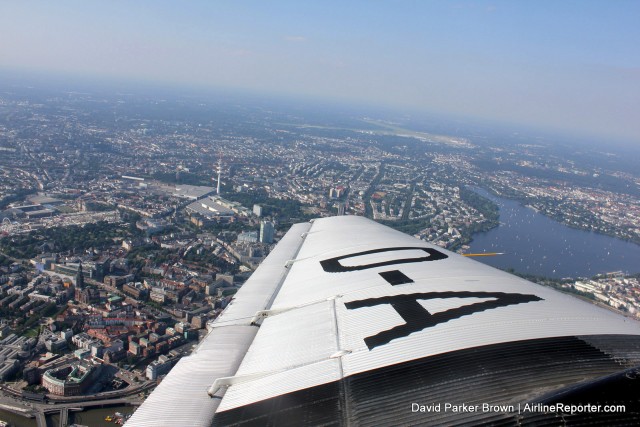 Looking out over downtown Hamburg

I am told that our flight was 30 minutes, but I would have sworn that it was more like five. That said, in that time, we managed to make our way over Hamburg and see the beautiful city from the air. Seeing any city from the air, even in a Cessna 172, is exciting, but being in the Ju-52 made it all more special. 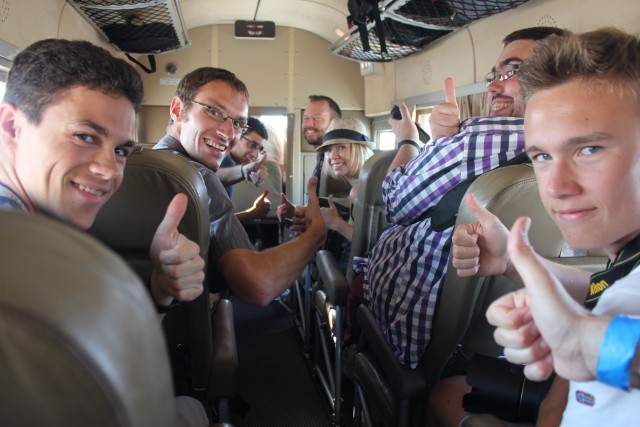 We made our way back to the airport and landed with cheers from all the passengers. What a ride! 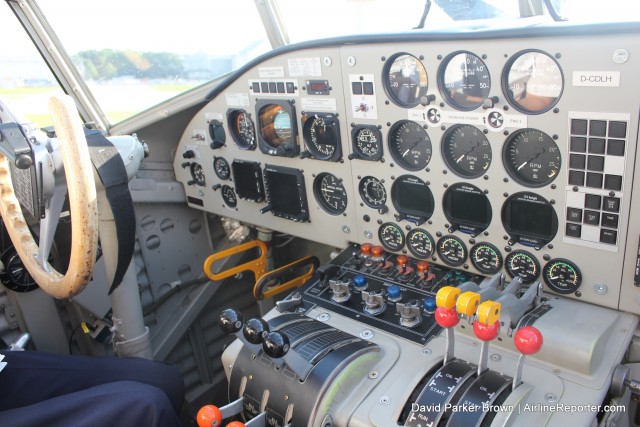 Almost like it just came out of the factory

After the flight we were free to take photos and, of course, I made my way into the flight deck. Again, just like the rest of the plane, (other than some new technology), it looked like the plane just rolled out of the factory. 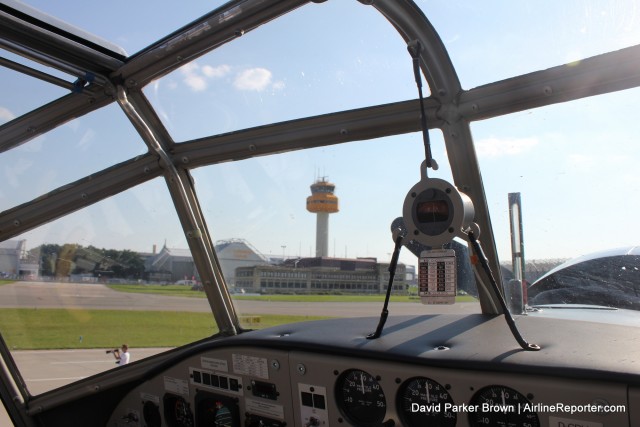 The tower through the front windshield

I was able to chat with all of the crew, including our wonderful flight attendant and two pilots; they all fly with Lufthansa. One pilot typically flies a Boeing 737 and the other an Airbus A330. I got the impression that being chosen to fly the Ju-52 meant you were part of an elite club of pilots, who not only love what they do, but are also darn good at it. 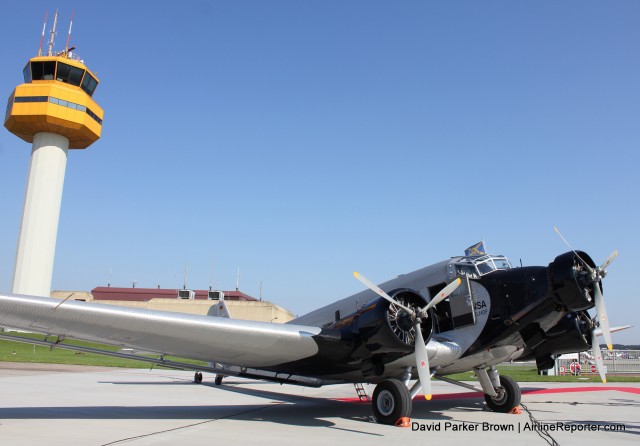 If it were left up to most in our group, we would have hung out with the Ju-52 all day. But soon we were told it was time to head back on the bus and make our way to the airport. With a smile and a little nod to the aircraft, thanking it for the ride, I was thankful to have the opportunity.

As a bonus, here is a video of the flight, taken by Jason Rabinowitz:

Note: Lufthansa Technik provided flights and accommodations during my trip to Hamburg.

What a great experience. It’s pretty amazing you can that some pre-WW2 aircraft is still airworthy. Even more amazing this plane is in such great shape!

What a great aircraft-a real credit to Lufthansas effort to preserve their history.Also, what an experience for the lucky passengers-I’m so jealous!
Finally, it was brilliantly captured on video for posterity-a brilliant piece of footage-I felt like I was there-thank you!

Looks like a lot of fun to me so many geeks on one flight. It reminds me of the flight I did at Oshkosh one year in a Ford tri motor with many avgeeks everyone had at least two cameras

Flights are always more fun when it is with a group of respectful AvGeeks. Some can get a little too serious for my taste, but this was a great group! I have always wanted to do the Ford tri-motor and now I feel I need to!

You have to come to Oshkosh next year. They have trimotor rides all day and you have to camp at camp bacon . Where all the coolest Avgeeks hang out

I recently rode the EAA Ford Trimotor in Rochester, Minnesota. It was great fun! The windows are enormous compared to modern jetliners, so the view is excellent. The Trimotor looks pretty similar to this JU-52, but I’m no expert.

Nor am I with the old airliners like this, but they are old. They have three engines. They used to fly passengers. There are still some flying today. I would say that is enough in common :).

One of my favorite aspects. I didn’t end up using this photo in my story, but I think it captures the texture well: https://www.flickr.com/photos/airlinereporter/20639038709/

Great review. Tante Ju is a very special aircraft and I was fortunate to be there on 22 August when she was declared a moveable monument.

Back in May I was able to take part in a one hour flight over Luebeck and over the Airbus factory in Finkenwerder on the way back. Not only was the flight exciting but I was impressed with the enthusiasm of the crew and their willingness to explain things.

Thanks for sharing! Even though the plane is awesome… the people that work on it and fly it are pretty amazing too. They are obviously very proud of that aircraft — as they should be!

Hi there
I would like to book a trip on this HU52 as a surprise for my partners 50 th birthday .. who would you recommend I contact to do this ?
Many thanks
Jaine Ellis-Hall

I have noticed you don’t monetize your blog, don’t waste your traffic, you can earn additional cash
every month because you’ve got hi quality content.
If you want to know how to make extra $$$, search for:
Mrdalekjd methods for $$$