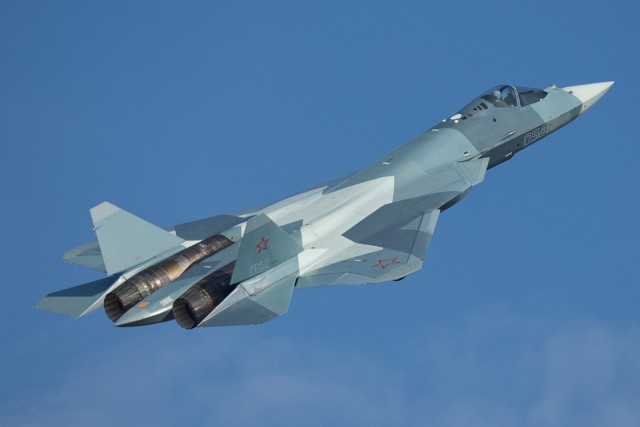 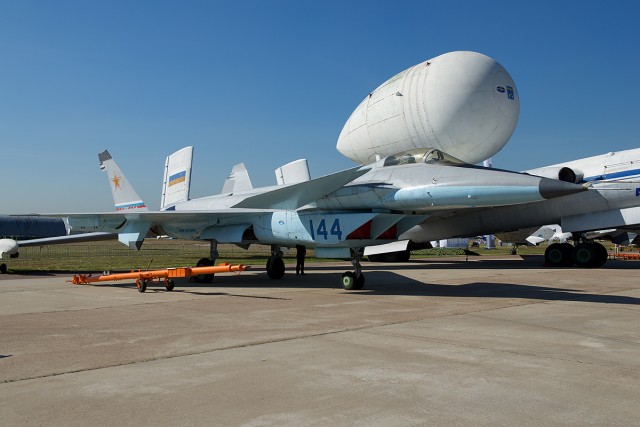 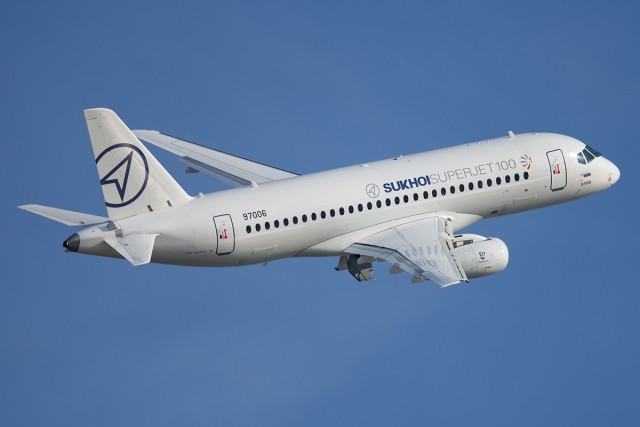 The biggest announcement, by far, was the confirmation and firm signing of an order for 32 Sukhoi Superjet 100s from Ilyushin Finance Corporation. This deal will see the 32-frame order split between Center-South Airlines, Yamal Airlines, and Red Wings Airlines, with Red Wings and Yamal also announcing an undisclosed number of options for the type beyond the firm order.

Kazakhstan’s SCAT Airlines was also a player, with an order for up to 15 Superjets being financed through Russia’s State Transport Leasing Company. Other news from Ilyushin Finance was that they have secured a major backer for their 39-frame C-Series order. Earlier this year, they had announced that the order was in danger of being canceled due to lack of banks willing to work with the Russian firm. 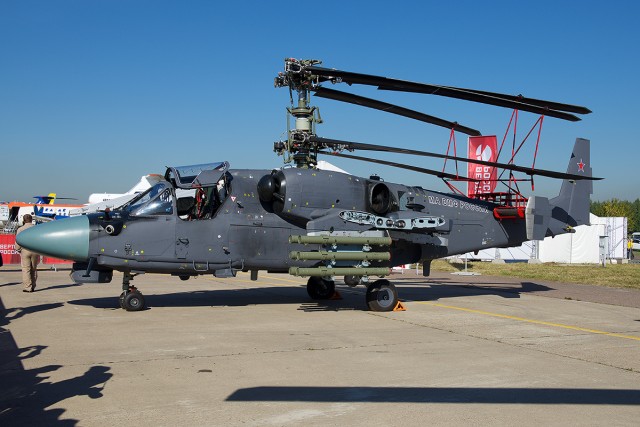 Kamov’s Ka-52K is in need of a ship, it’s France’s fault it has no place to land – Photo: Bernie Leighton | AirlineReporter

While civil sales were lackluster, military sales were slightly more brisk. On the first day of the show, Algeria confirmed an order for eight Mil Mi-26T2 transport helicopters and Mi-28N attack helicopters. This comes after an earlier order for six Mi-26T2s, of which two have already been delivered. 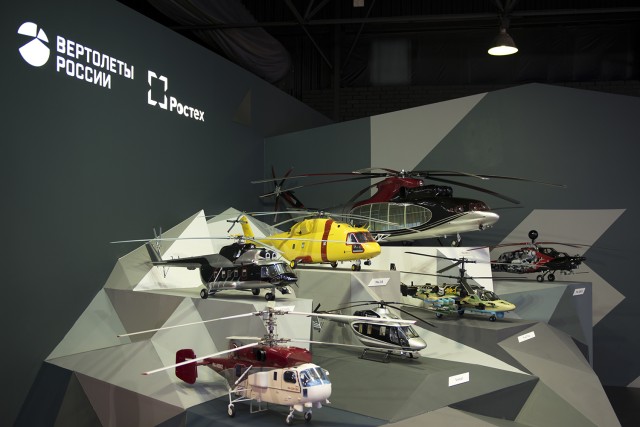 United Aircraft Corporation, the government-controlled holding company that includes all Russian manufacturers, announced that the Russian government will sign an order for another 48 Sukhoi Su-35 multi-role fighters in the coming months. Foreign delegations to the show included the Kings of Saudi Arabia, Jordan’s King Abdul, and Egypt’s President Al Assisi, as well as military delegations from Algeria, Angola, China, Iran, Sudan, and Syria. 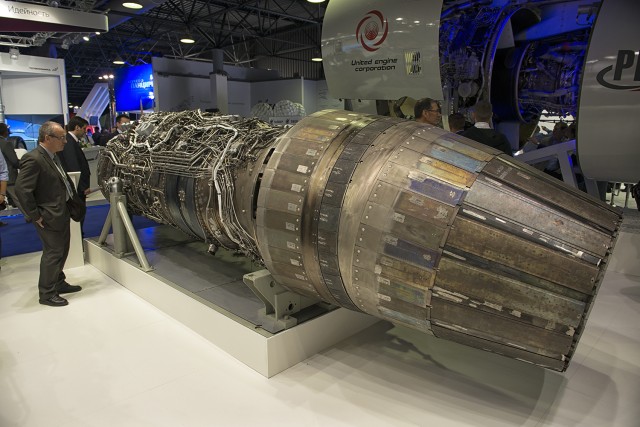 The display pavilions provided a chance for various companies to display their products to perspective buyers. One of the most impressive displays was that of United Engine Company. The Russian engine conglomerate had a wide range of their jet engines on display, ranging from small turboprops to the massive NPO Saturn AL-41 engine from the Su-35 and PAK FA. 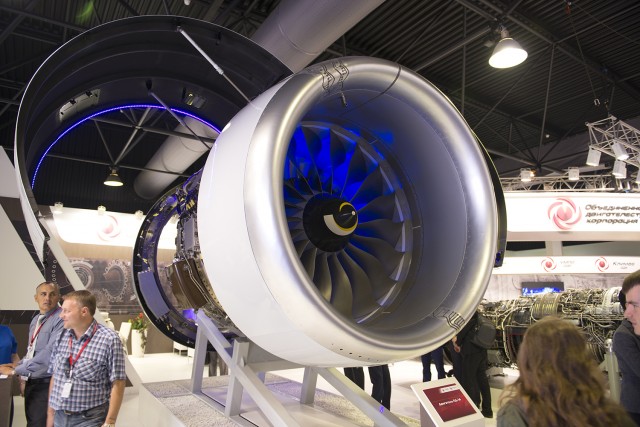 Dominating their display, however, was a test example of the Aviadvigatel PD-14 for the new Irkut/Yakovlev MC-21. This engine is nearing the end of its test program, and will be one of two offered for the MC-21, rivaling the PW1000G geared turbofan. 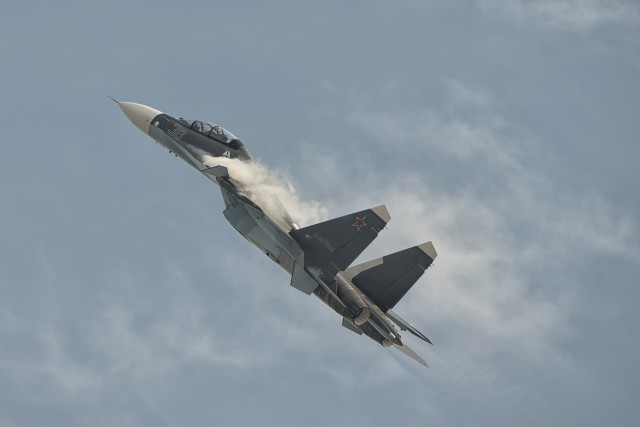 The impressive Su-30SM from the Russian Navy pulls vapor during its display – Photo: Kris Hull | AirlineReporter

The flying displays at MAKS were filled by some of the best that Russia has to offer. The impressive and powerful Sukhoi Su-30SM provided a show-stopping display, demonstrating its agility and prowess to an awestruck crowd. A surprise visitor was PAK FA, the Sukhoi T-50 demonstrator (pictured at the top of this page) for Russia’s next fighter. Its impressive display just left everyone’s jaw on the ground. 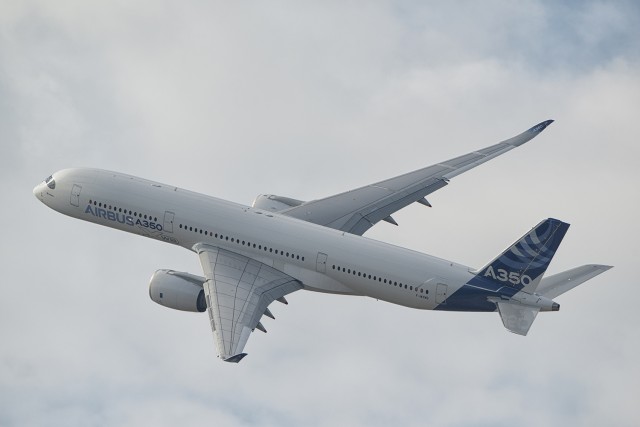 The first Airbus A350 is displayed at MAKS 2015 – Photo: Kris Hull | AirlineReporter

On the civilian front, the Sukhoi Superjet provided a pleasantly pleasing performance, showing its grace and elegance. Airbus, the only western company to fly a display, put the first A350 through its paces. The appearance of the A350 is not surprising, since Aeroflot is a large customer of the type, with 22 on order, and the first set to arrive in 2018. 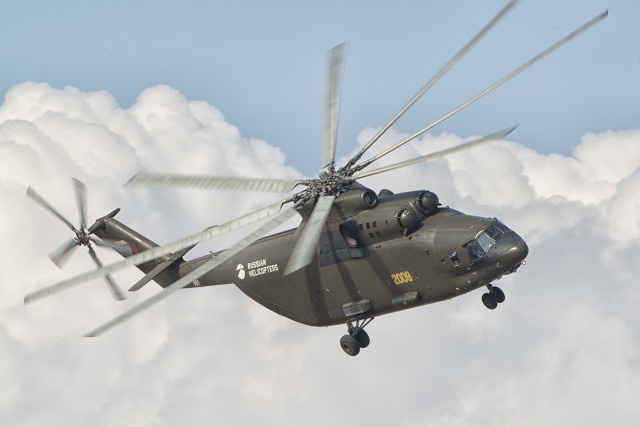 The massive Mi-26T2, currently the largest and most powerful helicopter in the world – Photo: Kris Hull | AirlineReporter

The future of MAKS and the aviation industry in general in Russia is in question, as the country turns to more isolationist ideals. It wouldn’t be too surprising to see orders from Russian airlines for western aircraft dry up very quickly. With Transaero announcing an indefinite deferral of their A380 order, and pushing their 747-8s to next year, one can already see that trend happening (assuming Transaero is still around). 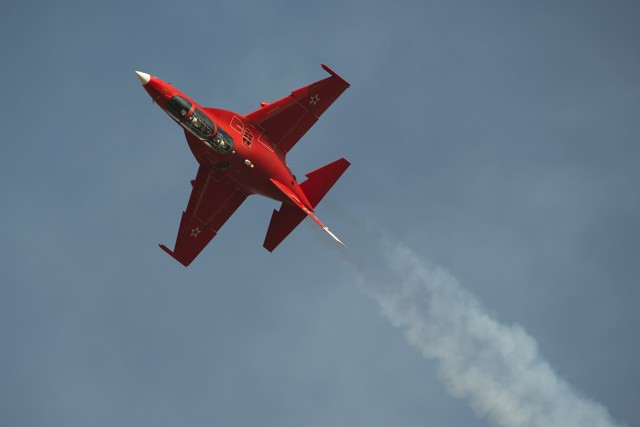 As I was attending MAKS for the first time this year, I cannot get the thought out of my head that the show has turned into a giant propaganda show machine for Putin and Medvedev. Don’t get me wrong, it is an excellent show, full of everything that a die-hard military aircraft fan would love: fast and noisy jets.

However, with only one major commercial aircraft order being announced at this year’s show, one has to wonder what direction Russia is heading in? That being said, I will definitely be back in two years for the next MAKS, in 2017! Russia builds some great aircraft, and the two Russian airlines I have flown so far, Aeroflot and Gazpromavia, are among two of the best I have flown recently in terms of service and product they offer.  I can’t wait to try more of the country’s domestic carriers.

A 350 looks just awesome. Its the best airliner aircraft in the world at present time.

Sukhoi T50 will rule the sky.