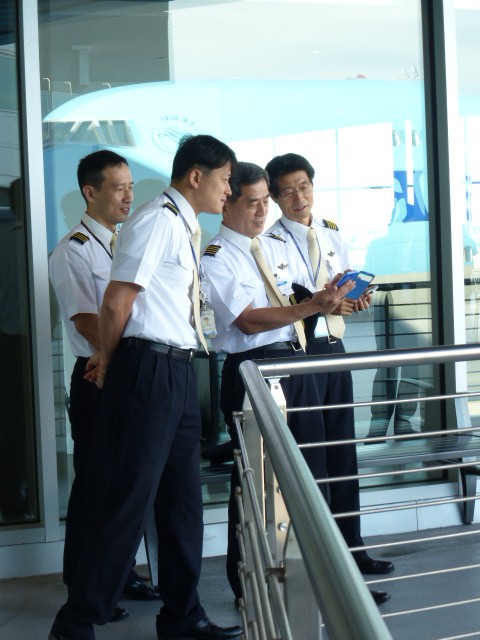 The pilots were very excited to fly home in this beautiful plane – Photo: Colin Cook | AirlineReporter

After the usual greetings, Mr. Conner and Mr. Cho both thanked each other and cited the long history these two companies have together. Mr. Conner joked that Korean Air had operated nearly every type of the 747, to which Mr. Cho quickly pointed out â€œeven the 747SP!â€ 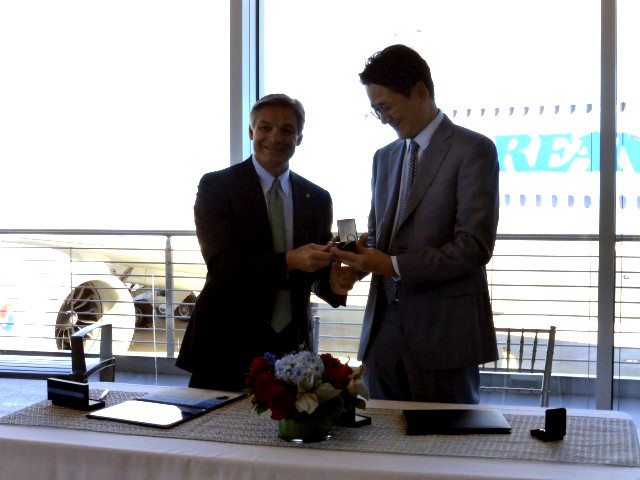 All smiles at the key exchange – Photo: Colin Cook – AirlineReporter

Mr. Conner handed over the ceremonial keys and cracked another joke, telling Mr. Cho that he should, â€œtry to start the plane with them,â€ (no, thatâ€™s not how it works). At the conclusion of the press conference, it was time to head downstairs for the ribbon cutting ceremony.

As is typical in these events, in addition to the ribbon Boeing had decorated the area with some beautiful flowers. There were alsoÂ some big gold scissors to cut the ribbon. Following the ceremony, I was excited to get onboard to check out the cabin. 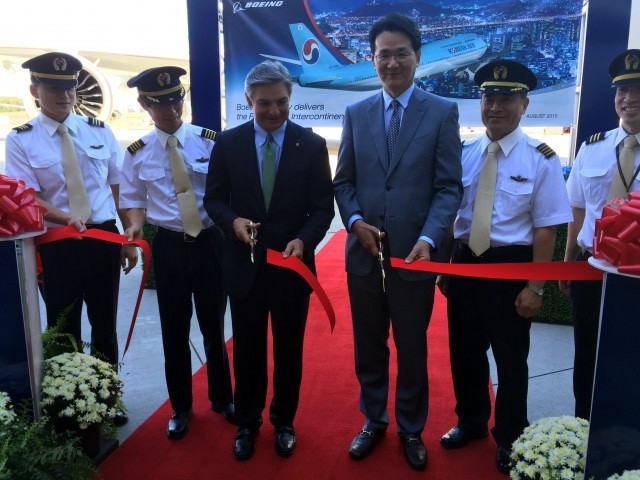 No, you can’t buy those scissors at Target – Photo: Colin Cook | AirlineReporter

The new 747-8I is configured with 368 seats across three cabins, including the new First Class Kosmo Suite 2.0 â€“ a newer version of their premium product currently on the Airbus A380. Korean now becomes only the second carrier (in addition to Lufthansa) to operate both the A380 and the 747-8I. 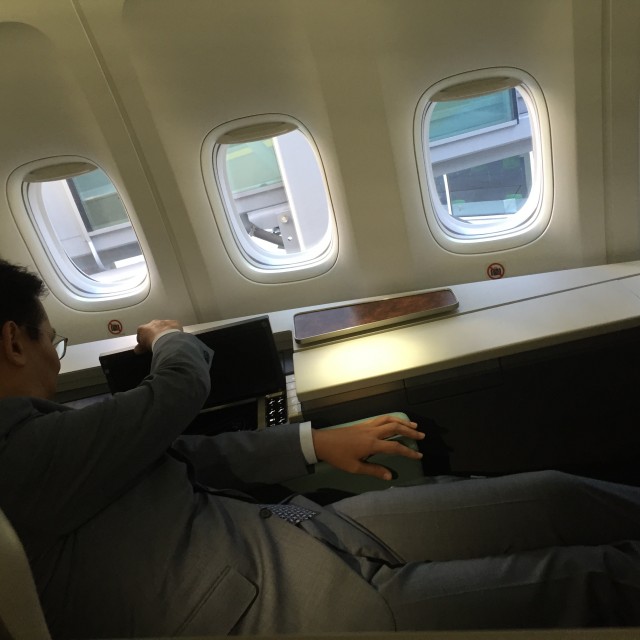 Up front, the new premium cabin boasts six first class suites, which feature a sliding door passengers can close for more privacy. While not completely enclosed, it certainly allows for a tremendous amount of privacy. Combine that with 24-inch in-flight entertainment system screen and it makes for a great place to spend a long flight.

If you have to â€œslum itâ€ in business class, the aircraft is equipped with 48 staggered seats with 18-inch touch-screens. Mr. Cho certainly was a great sport, despite all the attention. He quickly sat down in the Kosmo Suite and made himself comfortable, even exploring the amenities within the suite. 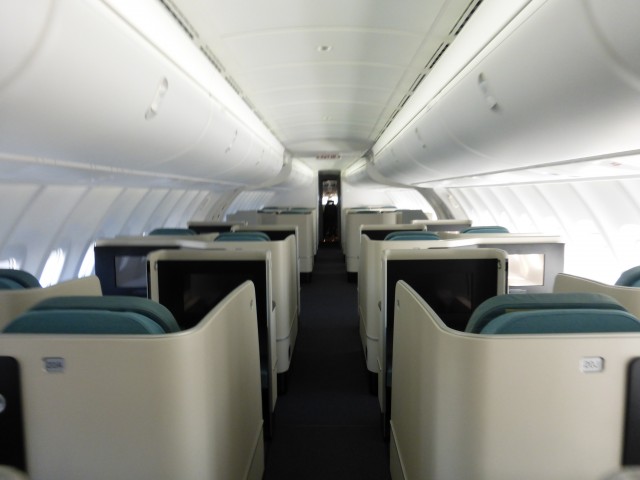 Another first for me was going upstairs on the new 747-8I â€“ Iâ€™ve flown on a 747-400 before but never upstairs. One thing that particularly struck me was just how long the cabin was on the upper deck. While narrower than the main deck, Korean certainly did a nice job laying outÂ their remaining business class seats (26 are on the main deck and 22 are upstairs). 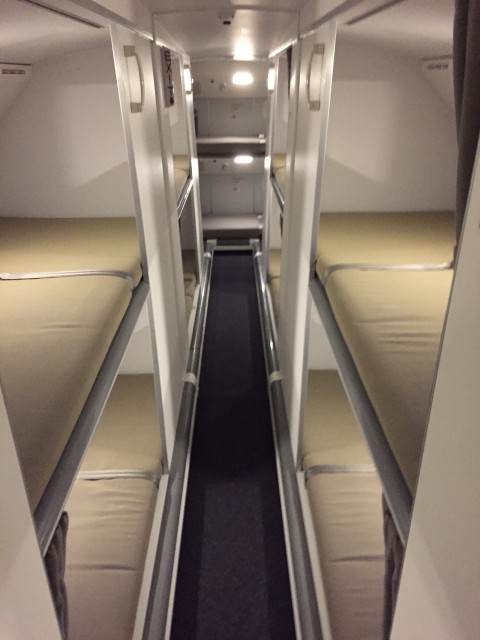 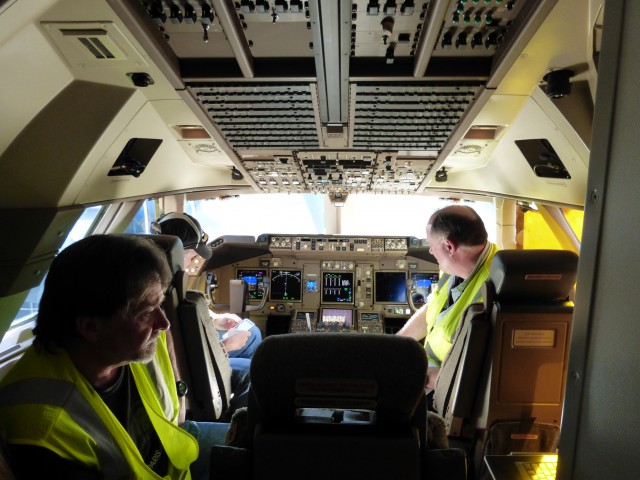 Boeing engineers preparing the 747-8I for departure to Seoul – Photo: Colin Cook | AirlineReporter

Throughout the ceremony and tour it was evident that Korean Air is very focused on being a global airline and one that caters to their high-end clientele, while looking at the bottom line.

â€œThis new aircraft delivers better fuel economy,â€ Cho said. â€œThat is important to a global airline such as ours. And it supports our goal to build and operate a first-class fleet of world-class aircraft.â€ He certainly isnâ€™t kidding that this is a premium product designed to take their passengers long-haul. With a nautical range of 7,730 miles, it can connect many distant cities. 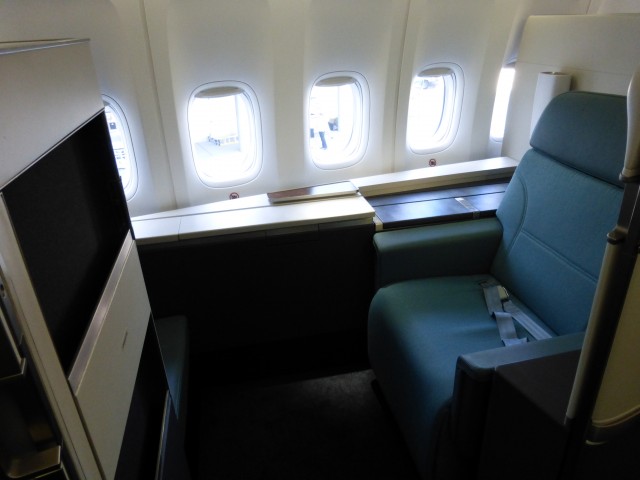 All-in-all, the Korean Air delivery ceremony definitely was a classy affair. The airline has a further 80 Boeing aircraft on order, including nine 747-8I to be delivered. 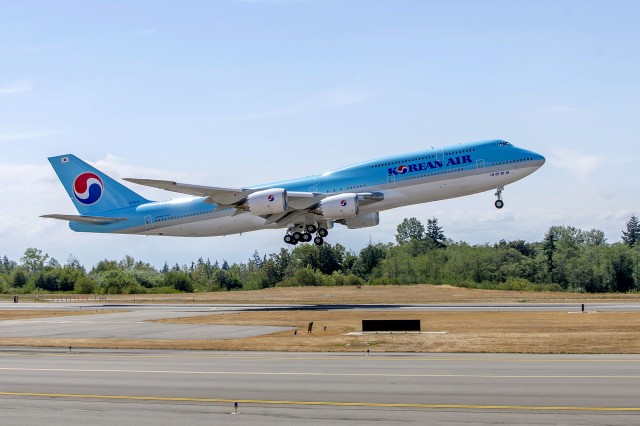 Korean’s 747-8I takes off from Paine Field – Photo: Boeing

The 747-8I flew into the sunset that afternoon on the way to Seoul for initial crew testing. Korean Air plans to put it into revenue service at the end of the month.

What a beautiful airplane.

On paper, the plane might not make much cents (heh) for airlines. It is too bad they don’t order based on history and looking good!

I’m a bit surprised that this plane doesn’t have winglets/sharklets as seems to be the case on most other types these days.
What is it about the aerodynamics of the 747-8I wings that preclude these?
What engines did Korean air choose?

Re winglets and the 747-8I: https://en.wikipedia.org/wiki/Wingtip_device#Raked_wingtip

Your first question: Raked wingtips are on longer-ranged aircraft. While better at long range than the winglet, it increases the wingspan considerably.
Your second question: The GEnx is standard on the 747-8.