A crowd gathered before a beautifully restored 767 inside a climate-controlled hangar on the outskirts of Delta’s corporate headquarters in Atlanta, Georgia. Attendees included executives, local and regional politicians, select employees, media and various VIPs. There was a marked excitement in the air. The facility had been closed to the public and shrouded in secrecy for six months, so all were excited to explore the newly renovated Delta Flight Museum.

The unveiling of the museum, which had been personally overseen by Delta CEO Richard Anderson, was timed to coincide with Delta’s 85th anniversary of passenger operations.  After opening remarks by Anderson, Georgia Governor Nathan Deal and Atlanta Mayor Kasim Reed, attendees were treated to a short video illustrating Delta’s history. Following the movie and a short awards ceremony attendees were invited to enjoy the festivities and have a look around the multi-room, multi-level facility.

Visitors are assured they have indeed arrived at the right place when driving by a 757-200 restored in the “Classic Widget” livery. For extra assurance a DC-9-50 in the modern “2007 Widget” livery that sits just across the way.

The exterior of the facility is undeniably Delta: Bright euro-white with large block letter titling: Delta Air Lines’¦ (Air Lines; two words — they’re sensitive about that). Delta widgets adorn the pavement, the building and are strategically incorporated within the museum’s design inside and out, allowing for a sort of AvGeek easter egg hunt for those looking for a challenge.

The lobby and registration area waste no time in providing AvGeek stimuli as if in an attempt to assure attendees who have yet to buy tickets that the museum is worth the cost and time. Upon entry, visitors are greeted by a large, spinning jet engine and highly detailed die-cast scale model planes hanging from the ceiling.

To the left is a well stocked gift shop featuring all things Delta. The shop is rivaled in diverse offerings by no other AvGeek store I’ve visited aside from the famed Boeing stores in Saint Louis, Chicago and Renton. 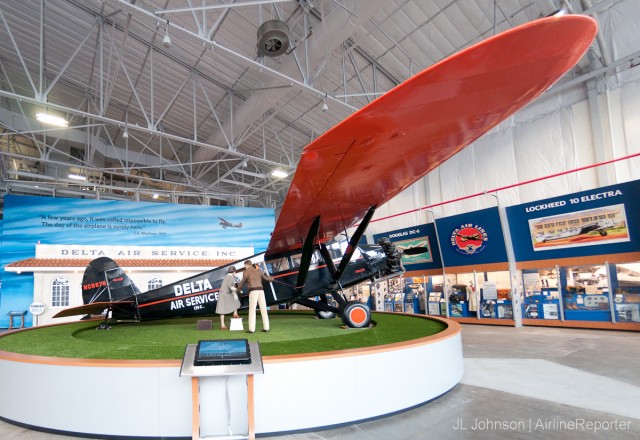 A wide angle shot of the Prop Age hangar.

Tours begin in the Propeller Age hangar which features artifacts from the earliest Delta Air Lines’ days. Modern-day Delta is comprised of 40+ heritage airlines, many of which are represented in the artifact exhibits that span the entire north wall of the hanger.

The majority of the hangar is dedicated to the evolution of the propeller plane fleet, and crop dusting heritage. On the west wall there is an exterior mock-up of the original Macon, GA Delta Air Service HQ and behind that, a theater. 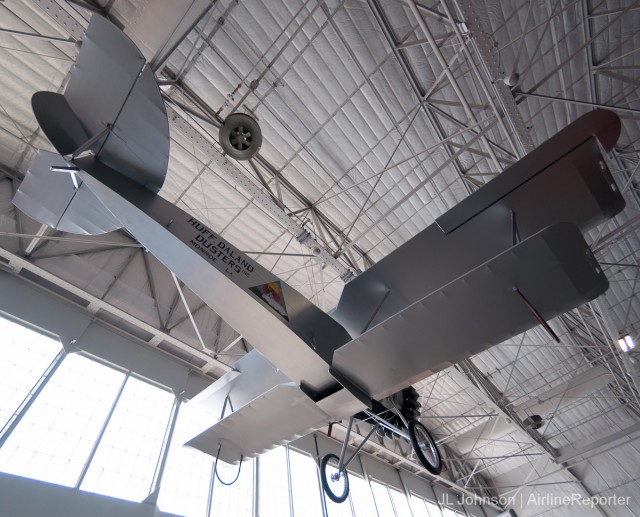 A duster hangs from the ceiling, permanently at home in the sky. JL Johnson | AirlineReporter

Suspended from the ceiling is one of Delta’s first planes, a crop duster. Delta’s history is unique in that all other US legacy airlines can trace their roots back to air mail carriers. While Delta was eventually involved in air mail, crop dusting was its first purpose. In fact, Huff Daland Dusters was the world’s first aerial crop dusting company.

C.E. Woolman, Founder of Huff Daland and longtime Delta CEO, vowed to continue the company’s long term crop dusting business. He was able to keep that promise until his death in 1966.  According to John Boatwright, a former Delta executive turned museum President, Delta discontinued dusting operations the day after Woolman’s passing. 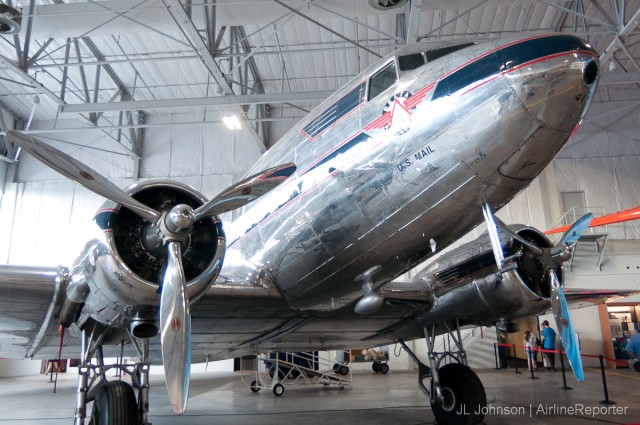 One of the crown jewels of the museum is the DC-3. This aircraft, known by employees as “ship 41,” was the second delivered to Delta, but the first of its type to begin passenger operations. The plane began scheduled service on December 24, 1940 and flew with Delta through April of 1958 when it was sold to a company that would ultimately form part Northwest Airlines and later a part of Delta.

The first DC-3 delivered to Delta, ship 40 and also known as the City of Atlanta, was used in pilot training and entered into service well after the ship 41. With room for 21 passengers and an all metal fuselage, the DC-3 is widely attributed to bringing profitability to the fledgling airline industry. Most alternatives at the time generally carried fewer passengers and were comprised of wood, and doped canvas. 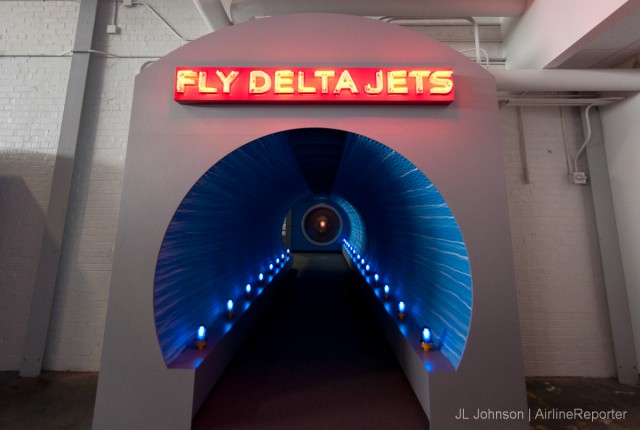 Chocked-full of propeller-age knowledge visitors trek through a Fly Delta Jets tunnel. It is a fun way to prepare for immersion in all things Delta jet age and pass between buildings, from Hangar 1 to Hangar 2. 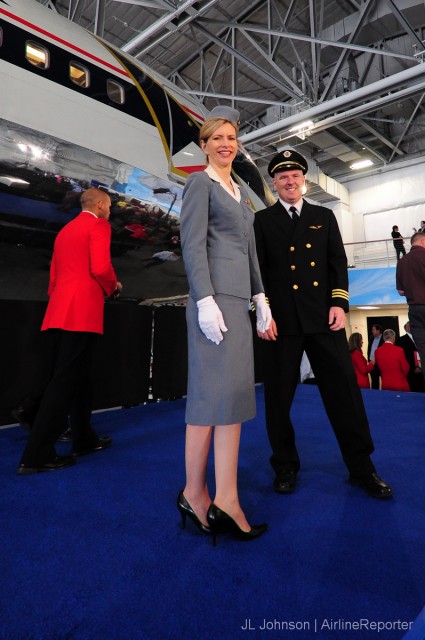 Upon entry into the Jet Age hangar visitors will be hard pressed to miss an immaculately restored Boeing 767 dubbed the Spirit of Delta shining as if it had just been delivered yesterday.

Visitors are encouraged to board the Spirit of Delta for a walk through. The first half or so of the plane is preserved as one would expect a period-correct 767 to appear, while the second half has colorful fact-packed displays. A combi sort of setup that clearly required a lot of thought, time and money but works very well. Some photos of the aircraft: 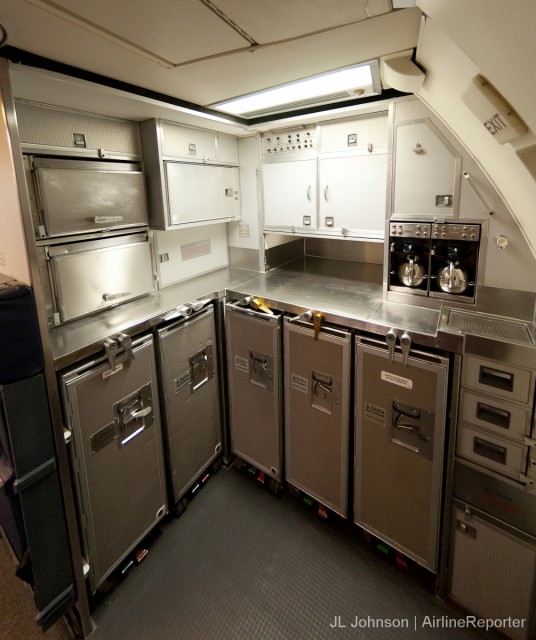 I found that the forward galley of the 32-year-old heavy was cleaner than what one would expect to find on a plane even a few years old — quite impressive. 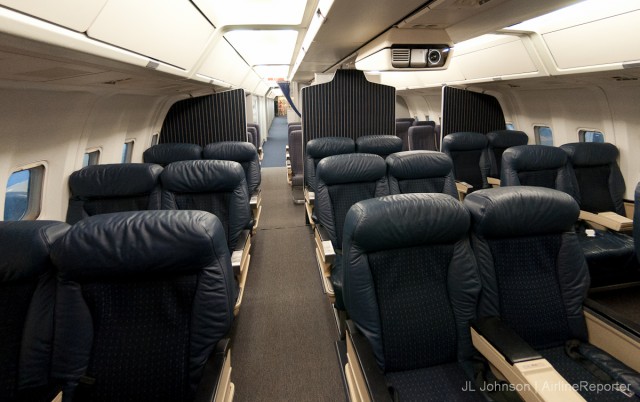 Broken in, plush first class seats looking as inviting as ever. 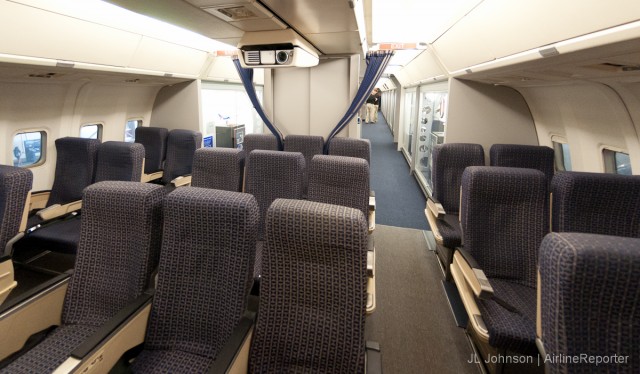 Seven-abreast in economy comfort, a configuration consistent with the current offering on Delta’s remaining 767 fleet. 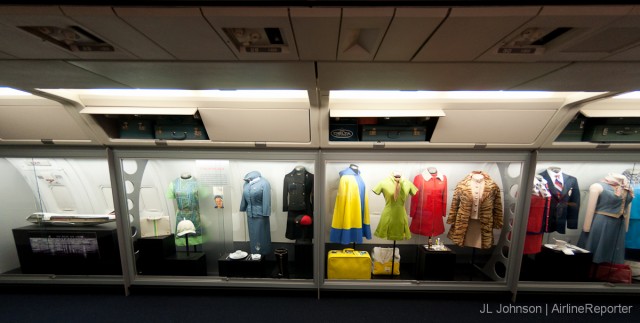 The rest of the plane has been transformed into an exhibit that runs the full remaining length of the interior on both sides. Beautifully constructed showcases feature a wide range of attire sported by Delta employees over the years, artifacts, plane models and a rear galley staffed by manikins. 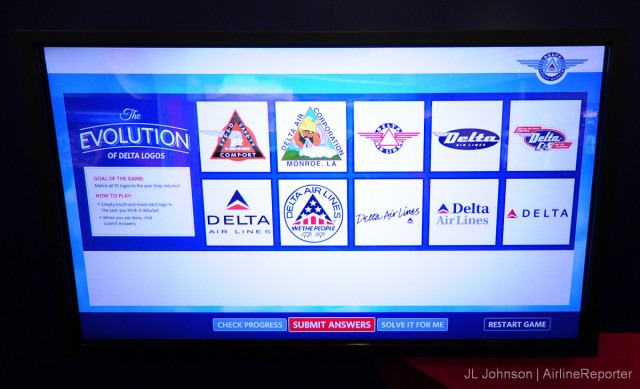 The museum finds a perfect balance between being clean and bright yet still hands on and not sterile. Interactive touch-screen displays are scattered about the museum floor. My personal favorites were the Delta logo game as well as a display that offered a catalog of on-demand, old school Delta commercials.

My only complaint was that there didn’t seem to be a volume control and the volume was unfortunately too low to discern what the actors were saying. No harm though, the commercials were filled with a diverse range of classic plane footage, plenty to keep me entertained. 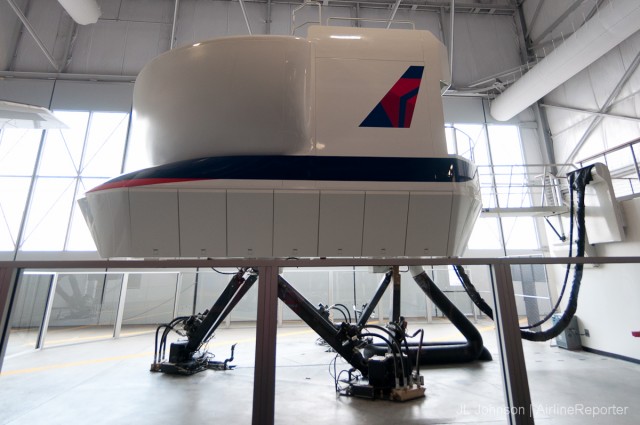 On the second level of Hangar 2 is a full motion 737-200 flight simulator. Time in the simulator is not included with the price of admission and the museum asks that simulator time be booked in advance as it does require supervision by specialized staff.

$395 buys a 10 minute pre-flight briefing, 45 minutes of flight time and a 5 minute review. Nearly $400 for an hour’s experience could easily induce sticker shock but in consultation with a few pilots and AvGeeks I’m told the price is actually quite reasonable for a full motion simulator. 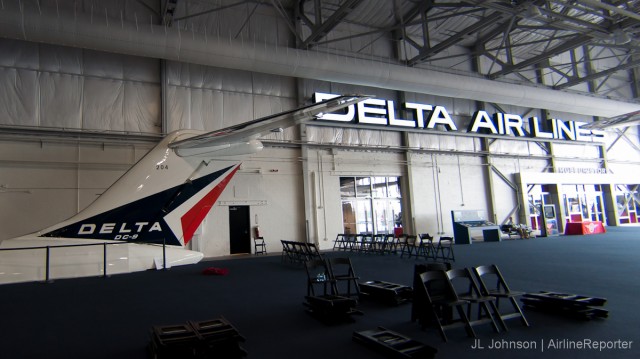 Eagle-eyed AvGeeks heading for the exit may recognize the familiar lettering above the lobby and gift shop. The lighted Delta Air Lines signage was retrieved from JFK’s Worldport prior to its demolition. The presence of these letters 886 miles from their longtime home is a testament to Delta’s commitment to honoring their history. This is a commitment reaffirmed each day as the doors of the museum are opened, visitors are welcomed, and children are inspired. In my opinion Delta’s museum is easily one of the top 5 in the US.

The museum is open from 10 a.m.’“4:30 p.m. weekdays and Saturday but closed Wednesdays. And as one would expect, hours are abridged on Sundays, 12-4:30 p.m. Admission varies, but the 18-64 crowd should expect to invest $12 in an experience that can easily fill an entire afternoon. Checkout the museum’s website for details.

Disclosure: Accommodations and experiences were provided by Delta Air Lines; our opinions are our own.

Booking a Weekend Away to San Diego… On the Fly
Ramp Operations – What’s Going on Out There?
2 Comments

Looks realy great! for simply Delta. I am concerned you have forgotten the great history of Northwest / Republic / Hughes Air West and Southern. Kinda sad.

It was my pleasure to work for Delta from Jan 1966 thru Jan 1977. While there I worked in the “Ole Line Hangar”, which I am sure is part of the museum. At that time Delta operated CV440, DC6, DC7, DC8,DC9 and B747 for passenger and C46 and L-100 for Freighters. I was an Aircraft Mechanic, Maintenance Instructor for B747 and a Line Maintenance Controller. I worked C-Checks at Love Field in Dallas, and C-Checks in Atlanta. I also worked Line Maintenance at Atlanta, Dallas and San Francisco. I remember Delta as a very conservative company with excellant aircraft maintenance. We had some of the most dedicated employees of any company I have worked for since.