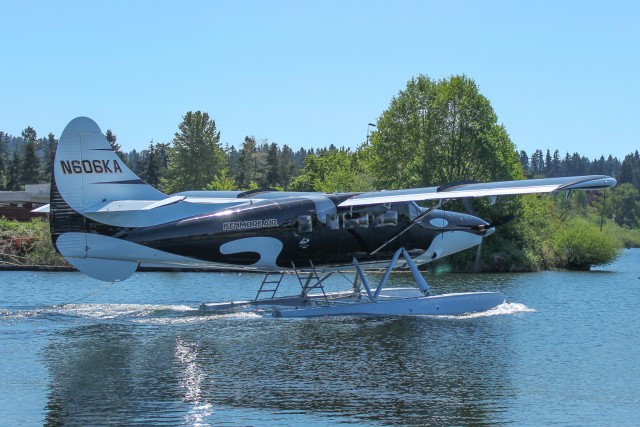 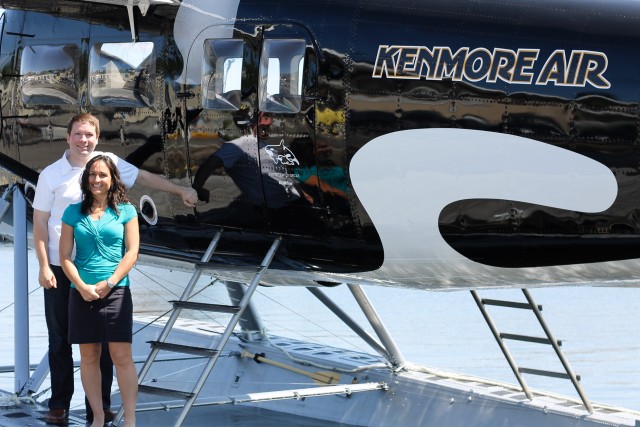 The pair said they first approached Kenmore about a year ago with the idea, aimed at raising interest among colleagues.  They said along the way everyone was largely supportive, and that Kenmore has a pretty family-like atmosphere. ’œI like working in a place where I can walk directly into the owner’s office and throw out my crazy ideas,’ says a laughing Hays.

Hays, who also designed the livery, said he’d bring in new drawings to share with his colleagues and then would drag them around to management to share their excited reactions.

Gullickson said that the partnership between Kenmore and Wild Orca was a natural one. ’œEverything we do is on water. We see these whales almost every day,’ she continued.  Once given the greenlight, the pair used a crowdfunding website to raise funds to cover the cost of the painting. Kenmore, for their part, would contribute the aircraft. 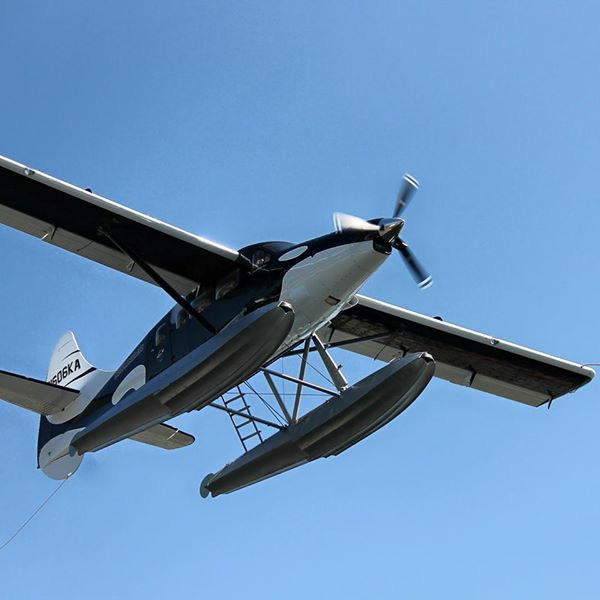 Typically, full-plane liveries can be a revenue source for an airline, though in this case, Kenmore waived the usual fees in support of its employees and organization. It is expected that the Wild Orca livery will stay on the DHC-3 for 7-10 years.

Apart from being a flying billboard for the organization, they also see the seaplane as an important educational tool; information and materials on protecting the region’s Orcas can be found onboard in each seat-back pocket.

Adorned with an Orca that almost appears to be spyhopping (peeking above the water’s surface) from inside the pocket, a beautiful glossy brochure contains a narrative from Ken Balcomb, Executive Director of the Center for Whale Research along with several helpful tips for promoting whale conservation.

Additionally, the plane will be joined on occasion by tabling and outreach programs put on by researchers and conservationists. Truly, this is a porpoise with a purpose! (Actually Orcas are not really porpoises, but the pun was too good not to use, so I am sticking with it) 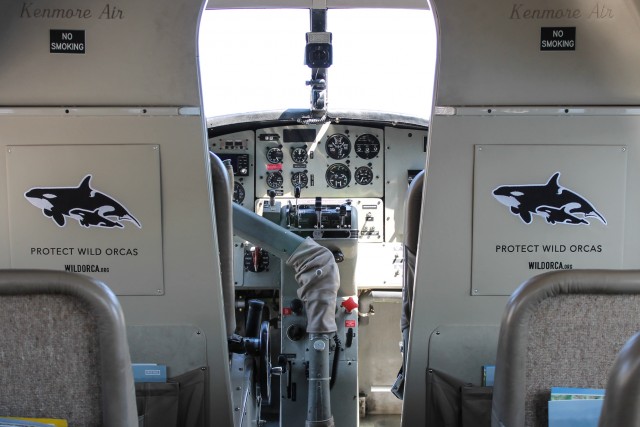 While the Wild Orca seaplane might not have been the first commercial plane painted like an Orca, it currently is the only one. For a decades-long stretch, Southwest operated three different 737s called Shamu One, each painted in a theme promoting SeaWorld’s most famous resident. While the Turbo Otter and those 737s may have shared some similar markings, that’s really where the comparison ends.

Southwest, of course, came under fire for the planes following a tidal wave of public outcry over SeaWorld’s treatment of the animals in the wake of CNN’s documentary Blackfish. In July of last year Southwest and SeaWorld said they were dissolving their partnership, citing ’œshifting priorities,’ and by the end of 2014 all three planes were repainted into the familiar Canyon Blue. 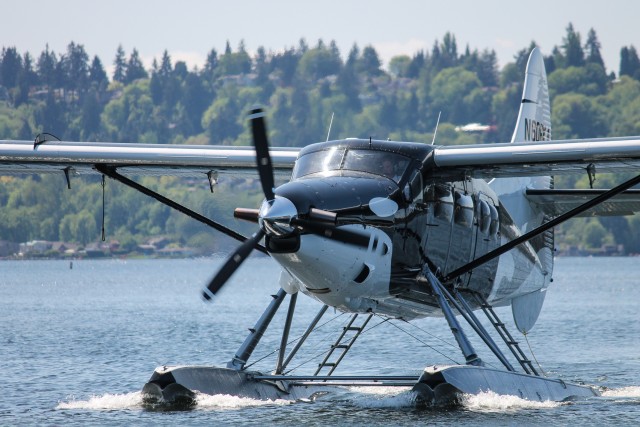 The Wild Orca seaplane returns to the Kenmore seaplane base from its first flight with the group from Friends of Youth – Photo: Lee Zerrilla | AirlineReporter

For the day of the big unveiling, Kenmore and Wild Orca invited a group from Friends of Youth, a local organization supporting children in shelters in the Puget Sound region, to learn more about Orcas and to ride along on the inaugural flight.  While the excitement and the anticipation of the plane ride was apparent in the group, they first got some lessons and Q&A time on Orca biology from Ken and Dr. Deborah Giles.

Topics ranged from the 40-year catalog of whale photos maintained by CWR to Dr. Giles’ anecdote about working with a dog specifically trained to sniff out whale poop.

Following the lesson and some rock-paper-scissors over who’d get which seat, the children were ready for their flight [Author’s note: at 31 this is how I still resolve seating disputes]. For many of the students, this was their first time in an airplane and one could expect the event would have a lasting impact. Due to so many kids participating, I was not able to join in on this special flight. 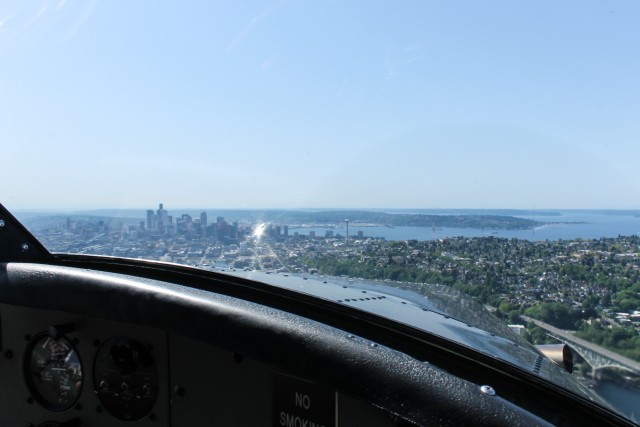 Looking towards downtown Seattle and Puget Sound from the cockpit of N606KA – Photo: Lee Zerrilla | AirlineReporter

However, the next day I was given the opportunity to join Anna in the Wild Orca seaplane as she brought it down to Lake Union, along with Dr. Giles and a load of educational materials.  The plane would spend its first day in service doing scenic flights from the Lake Union base while inside the terminal passengers would be greeted with educational materials and an attention-getting full-size replica of an Orca skull.

Having the opportunity to take to the air in this special plane and be afforded awe-inspiring views of Seattle, Puget Sound, and all the mountain ranges certainly helps one to feel like a smaller part of a much bigger world. It sure becomes easy to understand why these two pilots would start their underwater conservation efforts way up in the air.

Lee is a life-long aerospace enthusiast who always has his head in the clouds, an eye to the sky and spent his childhood years writing poorly-penned letters to NASA. Lee is most recently from the AvGeek paradise of Seattle and currently is residing in Abu Dhabi. Email: lee@airlinereporter.com

Is there anyway to track this beauty? I can’t seem to find it on flightaware or flighradar.

Not sure if you’re still interested but I believe this plane still has this livery and is trackable on ADS-B Exchange as of August 24, 2021.