I arrived at LGB on a bright and sunny day. My first impression was that its exterior was eerily similar to its fellow LAX neighbor Bob Hope (BUR). This would be my first visit to LGB and I hadn’t done any advance research, so I wasn’t really sure what to expect. 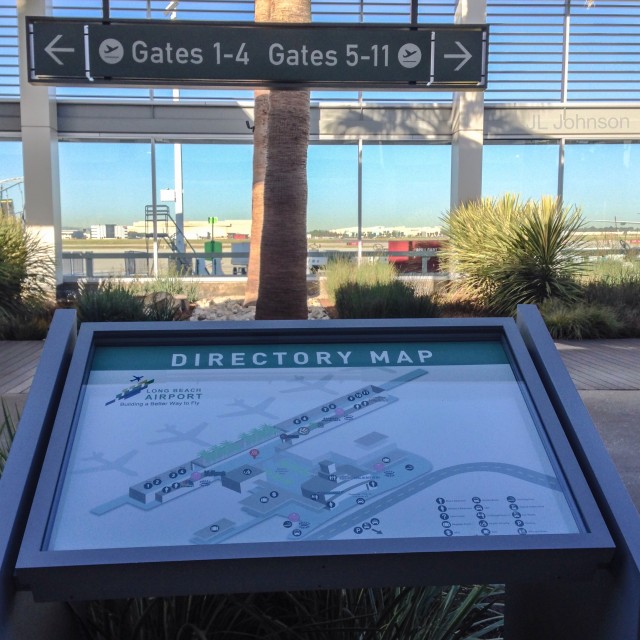 Upon exiting security, visitors are greeted with a great view and a directory – Photo: JL Johnson

Once inside the terminal it was clear we weren’t dealing with another BUR. For the record, I adore Burbank for its convenience, but it is in serious need of updating. Plenty of room, just… old. LGB, on the other hand, can be easily compared to that crazy 70s/80s haircut, the mullet. Business up front, party in the back. By that, I mean utilitarian exterior but an up-to-date interior which felt less like an airport and more like a trendy mall – in a good way. Certainly a pleasant surprise. 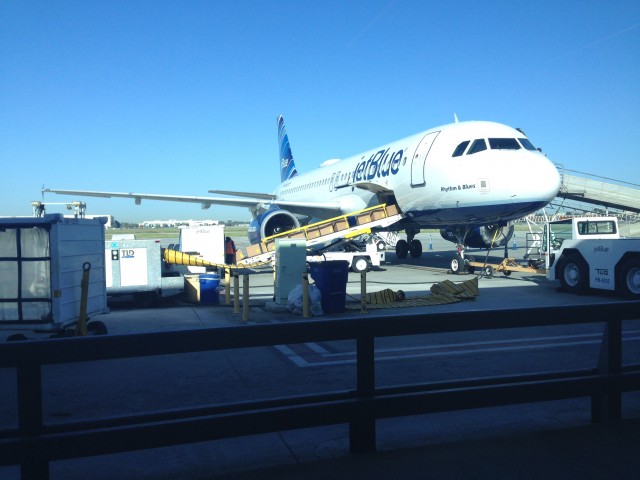 After a tasty but decidedly overpriced meal of orange juice and breakfast tacos just past security, it was time to find the gate. The windows of the terminal are huge and the tint isn’t obstructive or overly-colored like one might find elsewhere. Just a slight and pleasant blue tint which photographers can – it they must – easily account for with a minor white balance adjustment. I didn’t; this is a JetBlue review, after all.

I was bummed that there weren’t more planes on the ground because this would have made for a great spotting opportunity. 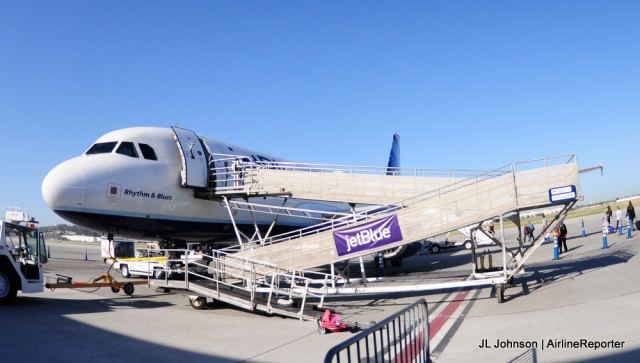 Boarding via the ramp is the BEST way to board. Unless it’s raining.

Boarding for the sold-out flight was quick thanks to no congestion on the jet bridge – LGB doesn’t have them! Instead, passengers board from the front and rear at the same time. Efficient, and a great experience for AvGeeks like me who appreciate the more immersive experience of boarding from the ramp. I did my best to keep up with my fellow passengers but I suspect walking to the plane and up the ramp with my camera to my eye identified me as either a tourist or AvGeek, or likely a combination of the two. 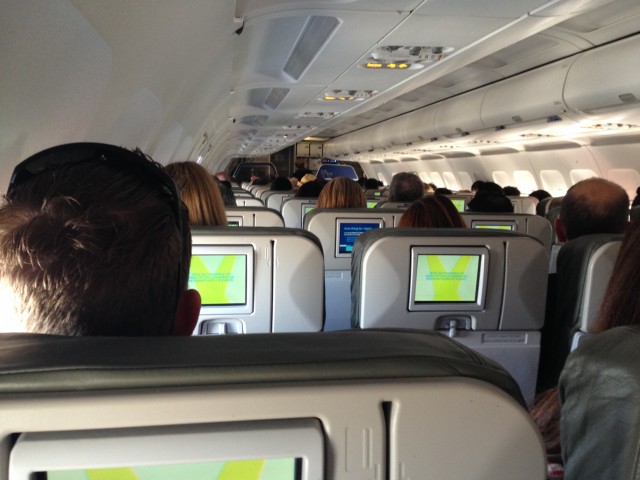 The view from 14A. What the plane lacked in aesthetics it made up for in comfort – Photo: JL Johnson

I knew beforehand that the seats on JetBlue’s A320s were slightly wider (0.8 inch) than those I’m accustomed to on Southwest. I didn’t think it would make much of a difference. I was wrong. Every little bit helps for a big guy like me and I found their well-padded leather seats to be particularly comfortable.

Once settled in I took a moment to look around. The interior wasn’t what I expected. For some reason I had it in my mind that JetBlue would sport more or less a “blue” version of Virgin America’s interior. Instead the interior was nothing to write home about, including rather outdated IFE screens like those Frontier is in the process of eliminating. 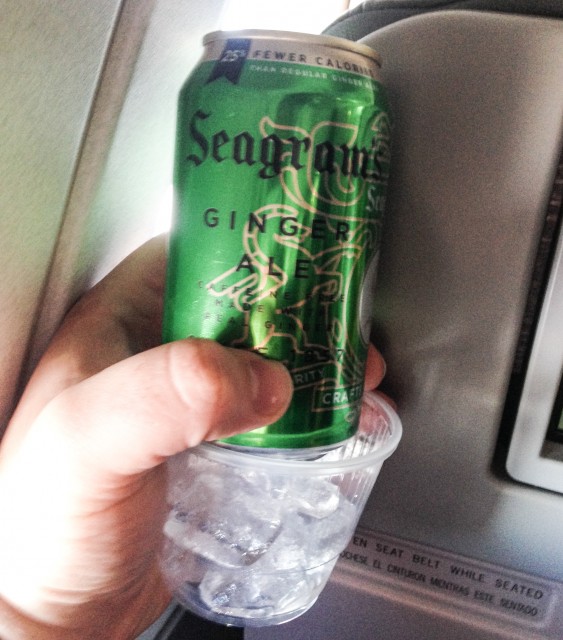 Small perks go a long way, like an entire can of ginger ale and unlimited snacks – Photo: JL Johnson

But who cares about the aesthetics of a plane’s interior anyway? All I really care about is service, comfort, and connectivity, all of which JetBlue got right. Anything else is frosting on the cake. Speaking of bonus items, the in-flight service included #TheWholeCan of ginger ale, a great selection of complimentary snacks, and a sincere smile from the flight attendant. 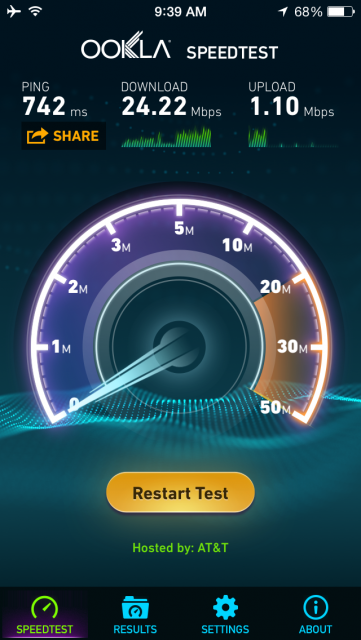 I had heard a lot about JetBlue’s dedication to rolling out a new, fast WiFi service which they call FlyFi. I pulled out my phone, connected and, credit card in hand, patiently waited for a login screen. There was none. Skeptic that the airline would give away a service that I’d heard such great things about, I opened my Twitter app to see if I could refresh. I could, and I found a response to of my tweets to the airline welcoming me aboard.

“Okay, so how good can a free service actually be?” I thought to myself. Well, as indicated by the screen shot above, excellent! By comparison, I’m used to something between 0-3 Mbps down and 0-0.5 up. Heck yes! 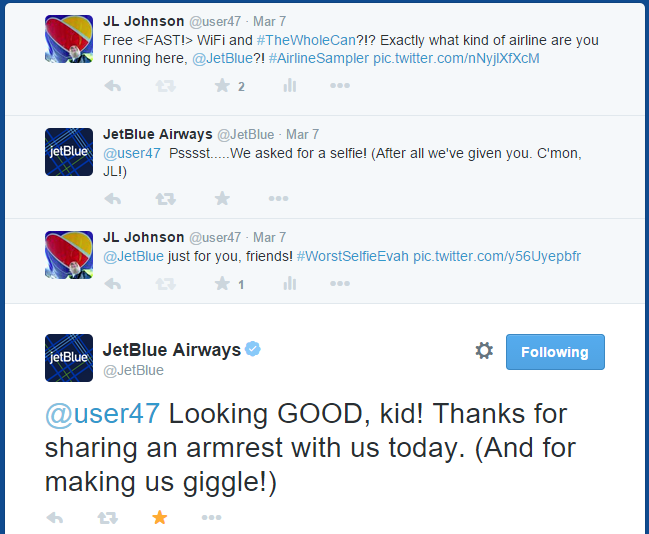 JetBlue should call their service the Friendly Skies. I wonder if that’s taken?

As a Twitter addict who’d been given free connectivity I was quick to login, thank the airline for their excellence, and start catching up on my timeline. This is where I discovered my final pleasant surprise in my inaugural JetBlue flight: A fun and engaging interaction with their social media team. So many airlines don’t invest in social media like they should (a mistake). Under-staffed departments lead to Twitter and the like becoming customer service and/or marketing tools only. JetBlue sets a great example in demonstrating what Twitter is for: A conversation – even if it’s about nothing – which leads to an engaged, delighted, and potentially loyal consumer group. 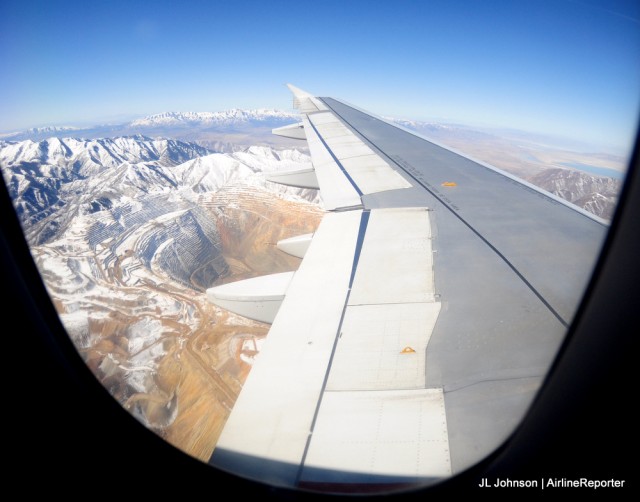 A great view out the window. And an odd large hole in the ground I later discovered was Bingham Canyon.

With such a great experience the 1-hour-and-45-minute flight seemed to last only half that. I did manage to snag a few good shots of the snow and mountains on descent into SLC, including one of a huge hole in the ground. I later discovered that the mystery hole was Bingham Canyon Quarry, an open pit copper mine that has been in existence for over a hundred years.

Conclusion:
I’m a hard core Southwest Airlines guy. But if JetBlue suddenly introduced a fair bit of service at my hometown airport, I could very well see myself in a LUV triangle, dividing my business between the two airlines. While I’m very happy with Southwest, I keep a wish list of items I’d like Southwest to get to at some point. It wasn’t until this flight with JetBlue that I discovered the airline I want Southwest to evolve into already exists… as JetBlue. As a crazy loyal, card-carrying Southwest A-lister, that’s the absolute highest praise I can offer. Well done, JetBlue!

Ethiopian Airlines Inaugurates Flights Between Los Angeles and Dublin
Flying on a Boeing B-17 or B-25: Collings Foundation Wings of Freedom Tour is in Seattle
1 Comment

I’m glad you enjoyed your flight! Like you, I’m totally loyal to one airline, but I’ve wondered how JetBlue would stack up against Alaska. Maybe next year I’ll get to try them out.

(Even if JetBlue had more flights from SEA, I care about frequent flier miles too much to consistently fly any airline that doesn’t help me in the mileage department, though. But as long as I’ve already reached MVP for the year, then it’s fun to try new airlines!)