I am a huge fan of celebrity chef and Hannibal menu designer Jos Andreas. I’ve eaten at , multiple Jaleos, Minibar, and, best of all, China Poblano. When I found out that Jos’s next restaurant was China Chilcano in DC…boom — reason established. 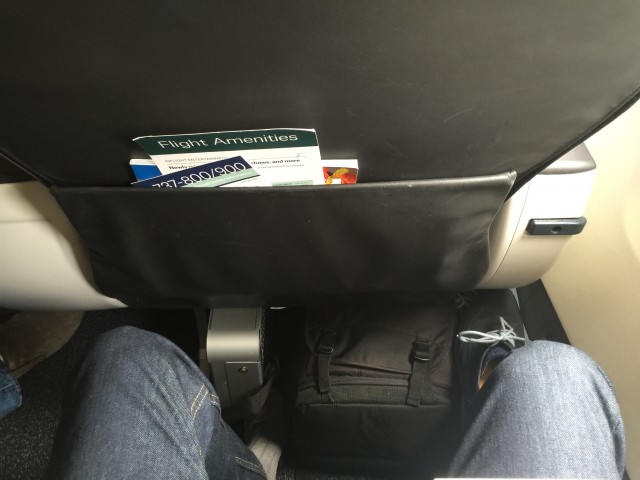 Because of DCA’s insanely-restrictive perimeter rule, I ended up with a first class ticket on Alaska Airlines that left in the afternoon. No checked luggage, plus Precheck, plus the Boardroom — I was ready to go.

Soon, I found myself in seat 2F and it was time to get the pleasantries out of the way. I squeezed my personal item against the giant underseat power box, opened up my pre-departure mini bottle of signature tap water, and read the menu. Actually — a nice touch — the menu was printed. You don’t see too many of those flying domestically out of Seattle. 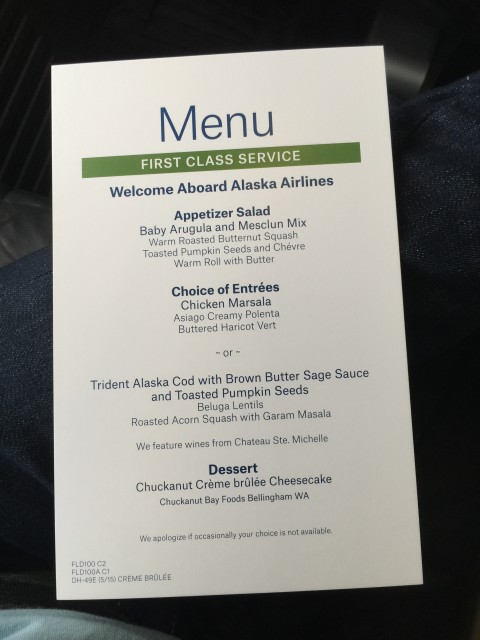 Time for another menu to appear – Photo: Bernie Leighton | AirlineReporter

Sometimes it feels like Alaska is three different airlines, maybe even four, all under one livery. In economy, I feel that they are an ULCC, with the seats to prove it. On shorter flights in first, they feel pretty competitive to other domestic carriers. Then you have Horizon (aka Alaska-mini) with its free beer. But on the longer flights, Alaska actually goes the extra mile.

Shortly before the cabin doors were closed, the flight attendant came by to ask everyone what they’d like to have for dinner and I was a bit worried, as I could tell there were more people who wanted chicken than there was likely chicken on-board.

I am sure the pork would’ve been fine and I understand catering costs money, but I just wanted my chicken! Luckily for me (but not those behind me), I got it. 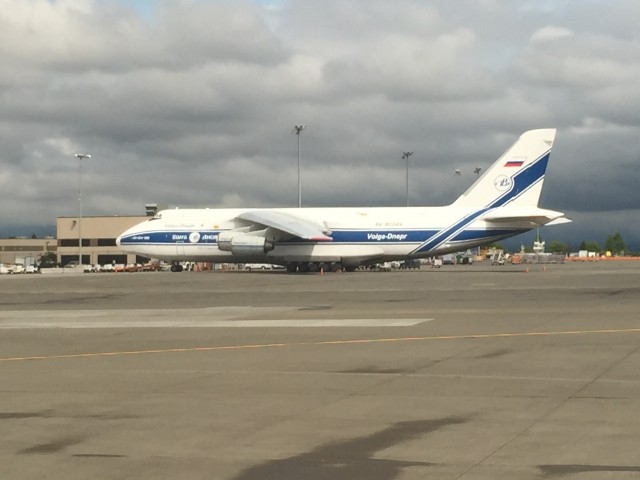 It’s always comforting to see something with a Russian registration on the ramp – Photo: Bernie Leighton | AirlineReporter

Anyway, pushback was pushback — except for one odd thing. During the safety briefing, I heard something interesting; did you know that the flight-attendant call button exists only for emergency use? That’s new, but that is exactly what the flight attendant told us. Since when has the call button become an emergency device? Maybe they were in a bad mood.

Soon, it was time to settle into the routine of five hours on a 737 (something way too common out of SEA). Pull out the laptop, get on Gogo, and then realize that everyone else wants to use Gogo too as its a flight out of Seattle. I had to resign myself to connection drop outs. It’s not that I can’t live without the internet, it’s just part of my IFE experience. 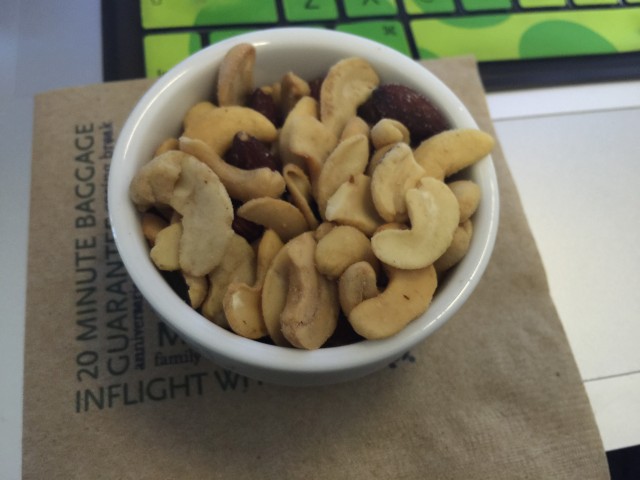 I was informed, soon after, that there was a short time until a full meal service (but would there be more cashews?). Good — I was starving. 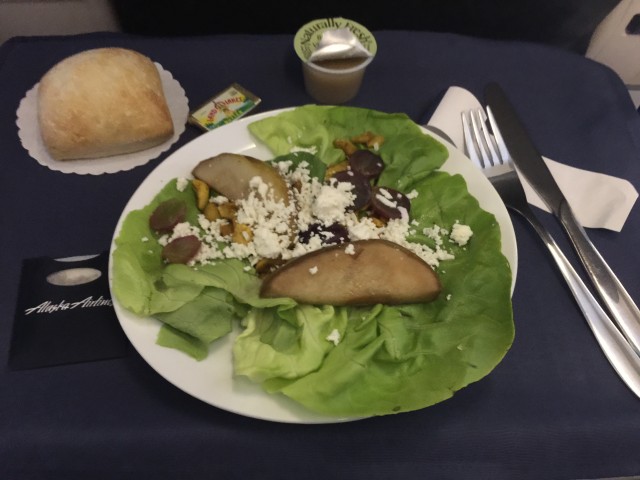 So there’s the butter lettuce, grape, grilled pear, and ricotta salata salad. The hidden curried cashews were missing in this photo. They’re in there. They were a highlight.

But really, the dish was flavorful and it disappeared. 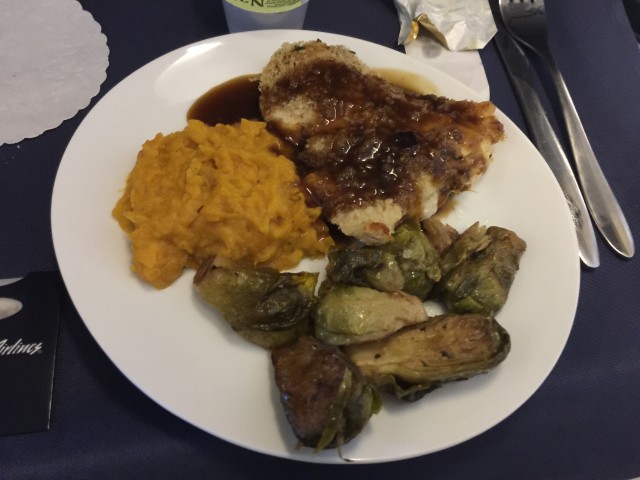 The photo above does not do this dish justice.

My panko-crusted chicken dijon with maple demi-glaze, mashed sweet potatoes, and roasted balsamic parmesan brussels sprouts was probably the best food that I’ve had on a domestic flight. I fly a lot, so that means something.

It’s nice to see someone either keeping the standard of their catering, or raising it. We recently did a special Beyond Alaska media event and wondered what the fuss was about. We thought that the food was great, but would it be replicated on scheduled flights — it has been.

Plates and trays were then removed. I was concerned — where was my dessert? 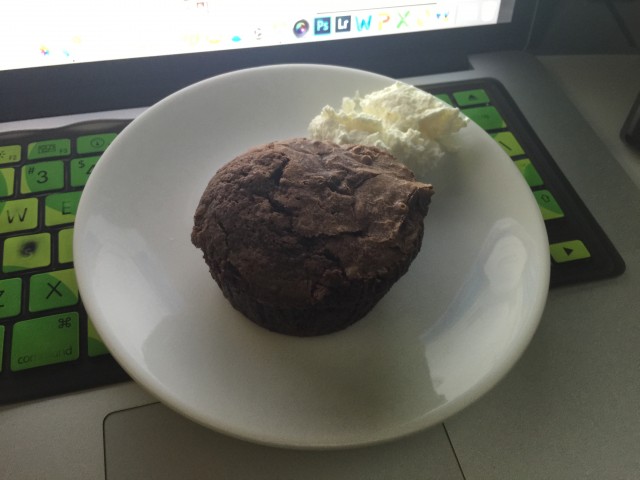 Finally, my Ghiradelli chocolate walnut brownie with rum whipped cream appeared. Thankfully, it was light on the nuts (but sadly on the whipping cream). Unfortunately, no opportunity for seconds.

The great food burned some time, but what to do for the next three hours? Internet and movies, of course! 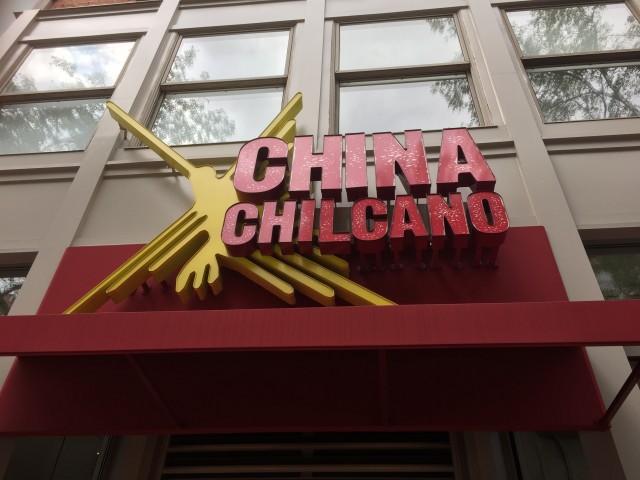 We landed in DCA without incident. I made my way to the “meh” hotel of the night that earned me some points. After all, getting in near 11:00pm and having an event less than twelve hours later does not say “hotel tourism.”

We’ve already discussed the almost-non-event by now. But if you are looking for a re-cap: I saw Akbar, enjoyed the press conference, and found myself wickedly ahead of schedule — time for lunch! I headed to China Chilcano. 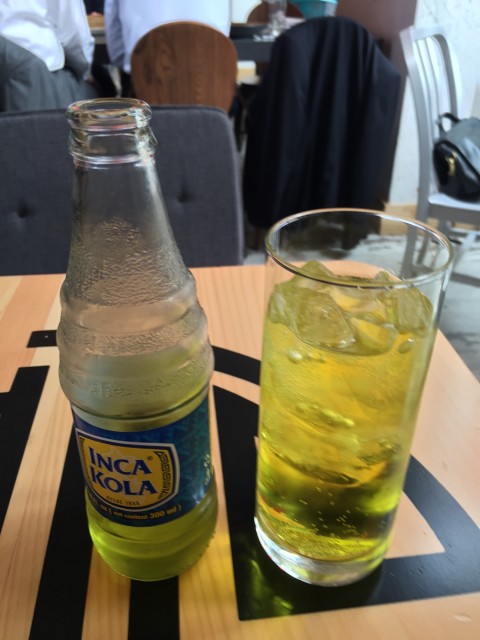 Despite being a Coca-Cola product, Inca Kola is not easy to find in North America (or outside of Peru) – Photo: Bernie Leighton | AirlineReporter

First to arrive was my bottle of Inca Kola. Ever had the Scottish drink Irn Bru? Imagine that, with a lemongrass flavor instead of the quickly-overpowering bubblegum. It actually paired well with everything that I ate. 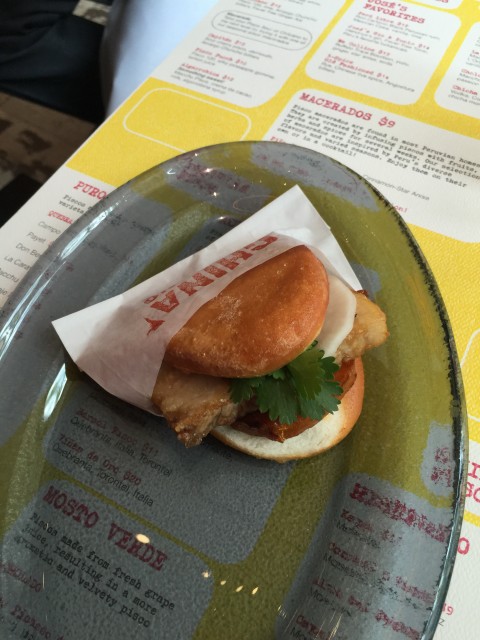 If there’s pork belly to eat, I’m going to eat it. I wanted to order the whole pork belly sandwich, but was told it was giant and may preclude me from eating other items, so I restrained myself. Instead, I ordered the Sánguche de Chancho Nipón as the flavors were similar, or so I was told.

Fried pork belly, fried lotus steam bun, pickled daikon, sweet potato, miso, ajà­ limo peppers, and hoisin sauce: for those playing along at home. It was flawless — I wanted to eat all of them forever. 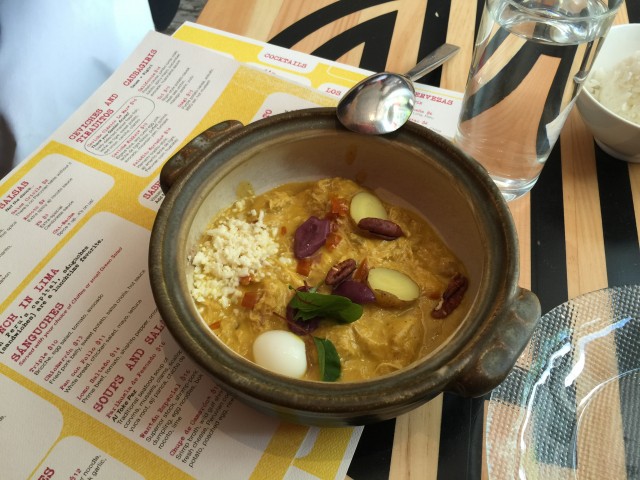 When I went to Ecuador last month, this is what I thought the food would be like. Flavorful, unique, perfectly balanced and, more importantly, matching the cultural oeuvre of the area. I was disappointed there, but happy here.

Plating was beautiful and the portion size was right on the nose. 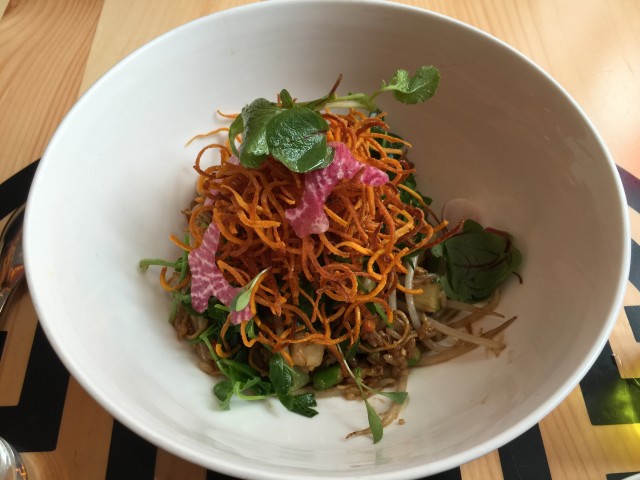 This dish is called Aeropuerto. Why? Well check out the vegetable airplanes – Photo: Bernie Leighton | AirlineReporter

But there was one dish that I had to try. Something that any AvGeek should at least taste: Aeropuerto.

It was delicious, of course. I only ordered it for the planes though.

I wish I could’ve had room for dessert — oh well, next time. With a full belly, it was time to head back to the airport. A short, but successful trip. 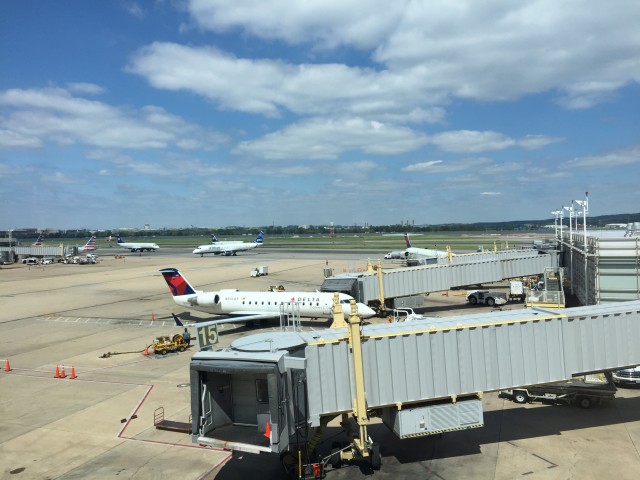 I was back on my Alaska flight and this time sitting in seat 3A. I was still a bit worried due to the catering dramas the day prior. Turned out that I was not wrong. If I had not been lucky enough to sit next to someone who was decidedly not hungry — I’d have been sentenced to fish. I don’t eat fish. 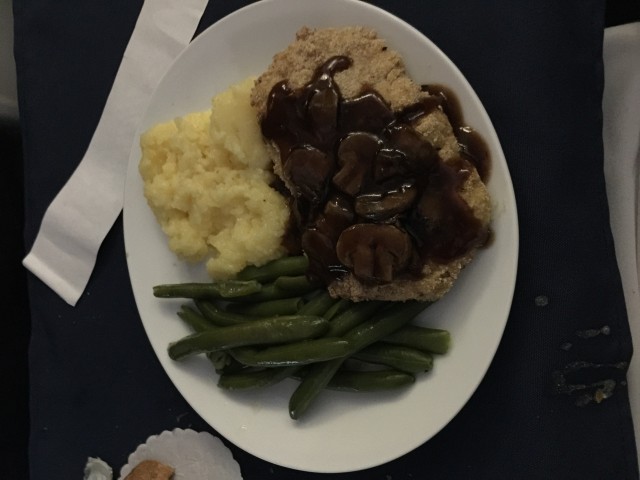 Once again I faced a plating that was uninspiring. Yes, taste matters most, but we also eat with our eyes. That being said, let me note that I was still impressed. It was light-years ahead of anything competitors have given me while flying domestic.

The rest of the flight was uneventful and we landed back in Seattle about 30 minutes early — a plus. 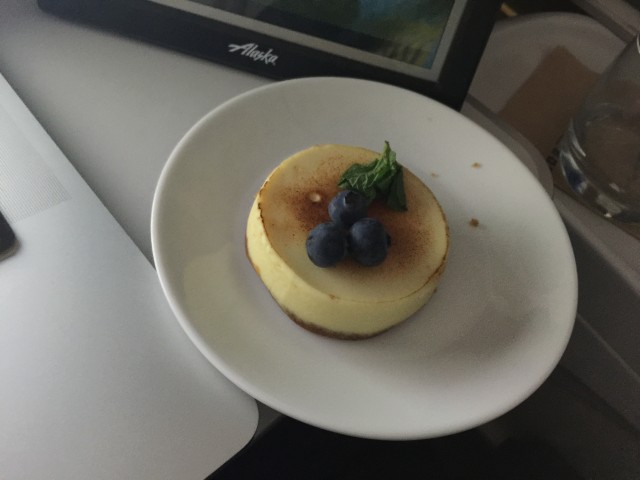 The theme of this adventure: food and a CEO. We all fly for different reasons and sometimes they turn out, sometimes they do not. I was thinking that my adventure would be more about the press conference and maybe about some food, but it turned out that food made more of a lasting impression — and that is okay.

The food in DC met what I was expecting, but the food on Alaska surpassed them. Only if they could make the looks of the food match the taste!

Bernie, I don’t know many ” AV-Geeks ” who can ” spring ” for a seat in First or Business Class! Having flown HUNDREDS of flights, over decades, I can recall only three ” complimentary ” upgrades! In the early 1970s, early in my Air Force career, Delta put me in First Class; on a ATL>MIA CV880 flight. Twice, another domestic airline – who I’ll NOT credit here – put me in Business Class. Both were on 777s; one from DEN>SEA and the second from ORD>LHR. Frankly, I was underwhelmed by the Business Class product! Can you guess which carrier that was?

I am one that is not into the miles game. I fly a lot, but mostly on media non-rev tickets that do not accumulate miles. But many, like Bernie, fly quite a bit, rack up miles and not only get free tickets, but also lots of upgrades. It is quite impressive :).