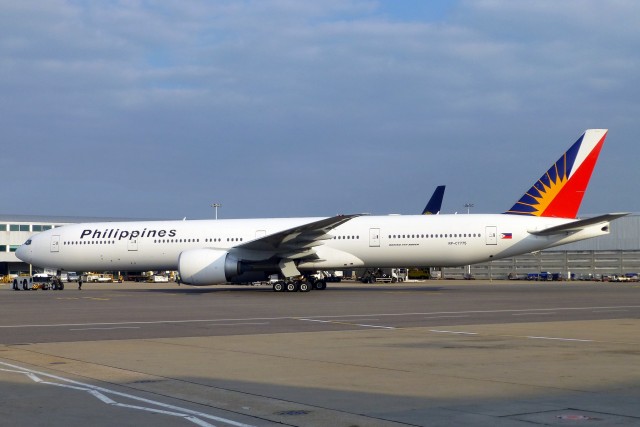 You see, back in September of 1997, Philippine Airlines began flying to EWR using World AirwaysÂ MD-11s. Back then, the Philippines was a Category 2 nation under the FAA’s International Aviation Safety Assessment Program, meaning that its airlines could not begin new service to the United States. The only way to fly to the US, while complying with theÂ regulation, was to wet lease your aircraft. Philippine Airlines would sell the tickets and then contracted with World to operate them. Naturally, this is an expensive proposition, and when coupled with the 1997 Asian financial crisis, it proved to be disastrous for the route. In August 1998, the route was cancelled.

Now, after 18 years, Philippine Airlines is back in New York, this time at JFK. The four flights each week from Manila (MNL) will operate via a stop in Vancouver, British Columbia (YVR). Philippine Airlines has fifth freedomÂ rights on the YVR-JFK sector for up to five flights a week. When I spoke with airline representatives, they indicated that they are currently in negotiations with the US and Canadian governments for additional frequencies on the route. The airline recognizes that daily flights are far more valuable to them and their customers than four flights a week are. The four flights per week on the MNL-YVR-JFK route are in addition to the seven that already flyÂ between MNL and YVR, four of which continue on to Toronto.Â Philippine Airlines joins Cathay Pacific as the only airlines flying nonstop between Vancouver and JFK. Cathay Pacific offersÂ daily 777-300ER flights on the route. Air Canada also flies an A319 once daily between Vancouver and Newark. 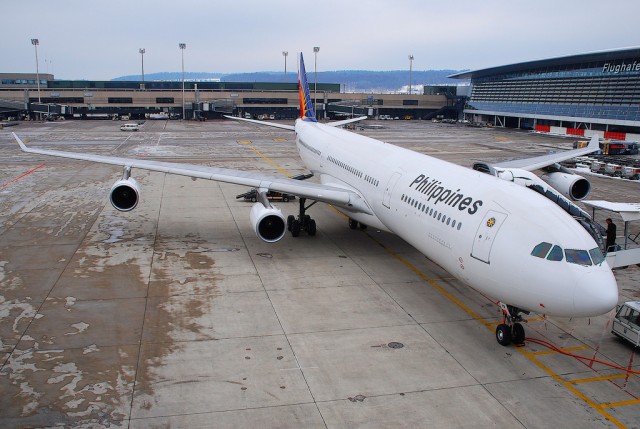 Although the new route to New York will start with the Boeing 777, it will be replaced by the Airbus A340-300 – Photo: Aero Icarus | Flickr CC

While the first flight to and from JFK operated with a 777-300ER, the route is scheduled for all future flights to operate using the airline’s A340-300 fleet. There is a big difference in passenger experience between the fleet types. The 777s have a full audio/video on-demand (AVOD) system and USB power ports at each seat, with AC power ports at each Mabuhay (business) class seat. In business class, the 42 seats are angled lie-flat in a 2-3-2 configuration, with 78 inches of pitch. Back in Fiesta (economy) class, the seats are in the dreaded 3-4-3 arrangement, making for a tight squeeze, although the 33-inch pitch is moderately generous.

The A340-300, on the other hand, is dramatically more dated. Mabuhay class features older recliner-style seats, though the 2-2-2 configuration gives all but the window seats direct aisle access. Each Mabuhay class seat is equipped with a seatback screen, although the content selection is much thinner,Â and is not on-demand. Back in Fiesta class, the seats are arranged in the common (and comfortable) 2-4-2 layout, with the same 33-inch pitch. However, the IFE in Fiesta class is through overhead monitors, along with 12 audio channels; a far cry from the 777’s AVOD. And power ports just aren’t happening on the A340-300s in either class.

The airline has announced plans to install WiFi and streaming IFE on the long-haul Airbus, however as best I can tell, nothing has been installed yet.Â While the current schedules only show the A340-300 operating this new route moving forward, in speaking with the airline, they indicated that they intend for the flights to use a mix of A340-300 and 777-300ER aircraft. 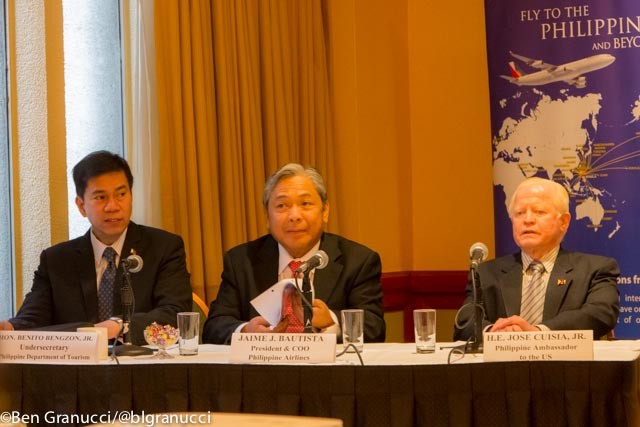 Airline President and COO, Jaime J. Bautista, and other VIPs speak at a recent press event in New York.

They will face some stiff competition on these routes. Several other airlines also serve Manila from NYC with a single stop currently. Among these are Cathay Pacific, with its four daily flights from NYC to Hong Kong, less than 600 miles fromÂ Manila. Delta currently offers a direct flight from JFK to Manila, stopping in Tokyo, however later this month the direct flight becomes a connection in Japan. Ultimately, almost any of the Asian or Middle Eastern airlines serving JFK can fly you to Manila, and many times the flights are the same length or shorter than Philippine Airlines flight. As always, time will tell if Philippine Airlines can make this new route work.

https://www.airlinereporter.com
A Closer Look at the Comac C919 – Why Does it Exist?
5 Things That Bags Hate – An Open Letter From the Pan Am Bag
6 Comments

Ben! Great piece. I dig your lead in image as well. Fun to learn about how foreign carriers are operating in the NYC area– Not something I’ve had much drive to investigate on my own. Interesting to learn that Canada is so liberal with non-Canadian airlines operating YVR-JFK as I’ve always heard Canada was particularly protective of their domestic airline business so this is a surprise to me. In any case great piece and I’ve left learning quite a bit. Cheers!

They are. These date back to Air Service agreements from nearly half a century ago! Or in the case of Cathay Pacific, longer! Do not ever use past precedent to gauge future actions with Canadian aviation.

Just one note in regards of JL comment.
There is also Cathay that flies HKG-YVR-JFK… but there are not in the same scenario as PAL…
CX is selling seats on the YVR-JFK-YVR leg (CPA888-889), while PAL doesn’t sell the segment YVR-JFK-YVR (PAL126-127). This is why they would be allowed to operate since they are not boarding any pax traffic originating from YVR. Everyone boarded in MNL and are just in transit.
Cathay has a different agreement. Also, the CX pax out of Vancouver are treated as international passengers since they cannot use the pre-boarding facilities in Vancouver because they are joining the HongKong passengers already onboard.
Cheers

JUST WANTED TO SAY WELCOME BACK PHILIPPINE AIR LINES.
WISHING YOU ALL THE VERRY BEST…

PAL has inferior product on their A340’s and many Filipinos living on the East Coast will still fly ANA through Chicago or Boston, KAL through JFK or ATL, or others because the price is similar to PAL’s price. They may have to switch airlines in these cities, but the connections are usually through partner airlines so bags are checked through from the origin. Also, total travel time is less as the change of planes that occur through their hubs is usually less than 2 hours.

There is a nice article about this on the Philippine Flight Network Blog. As I do not want to violate any posting guidelines by posting the direct link, just do a web search for the blog.

You are welcome to share links to other sites that relate to the story — as long as you aren’t spamming :).