Another week, another flight. This time my adventure started at Los Angeles International, with a ticket in hand on EVA Air to Taipei. The occasion? To give the carrier’s Royal Laurel (RL) business class a good, thorough testing. 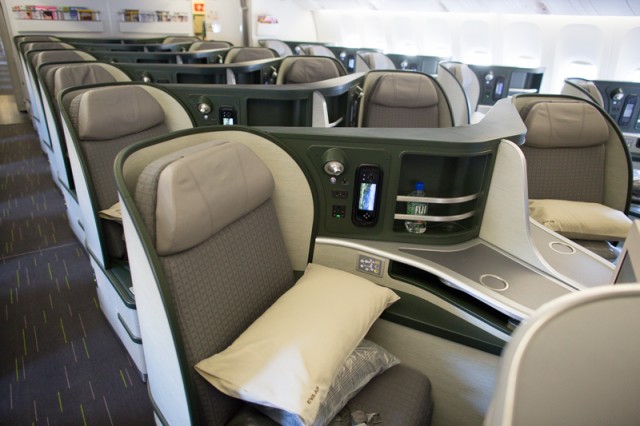 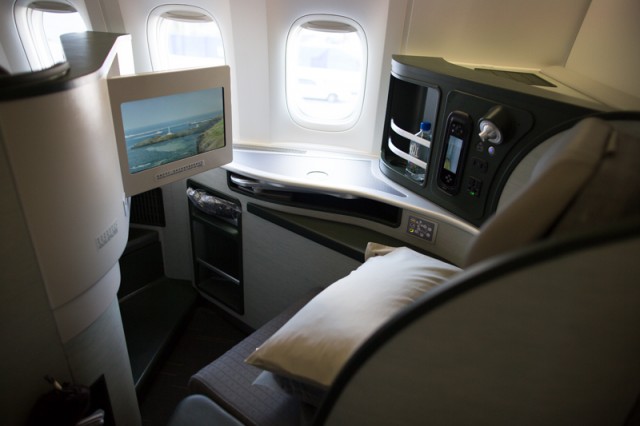 The giant GE-90 engines powered the Boeing 777-300ER off the ground and into the air for the scheduled 13-hour, 30-minute flight to Taipei. The flight plan tracked up along the California coast before turning northwest towards Alaska, loosely following the Aleutians before they turned into the east coast of Russia and eventually giving way to Japan.

Once airborne, pajamas were handed out, along with the extremely popular Rimowa amenity kits. 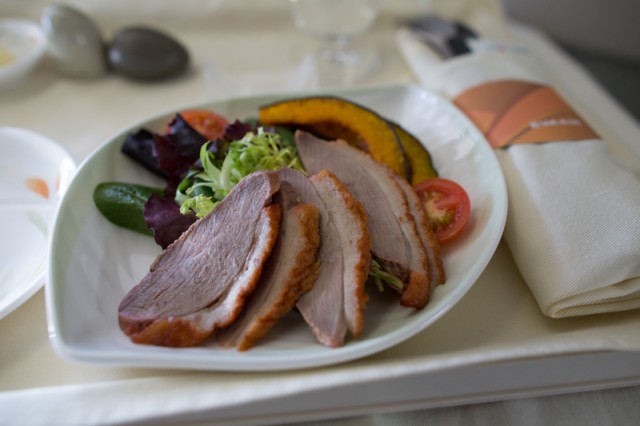 The start of my dinner on Eva – Photo: Jeremy Dwyer-Lingren | JDLMedia

Dinner service began not long after, and a treat indeed was in store. The five-course affair began with mixed nuts, seasoned duck with pumpkin, and a salad with honey mustard. A side of mushroom soup followed: creamy but with just enough grainy texture to turn it truly delicious.

The main entre featured Wagyu beef in Hollandaise sauce, sauted vegetables, and mashed potatoes with kale. The beef stood out, as one would expect. The sauce added a wonderful pop to each of the items. 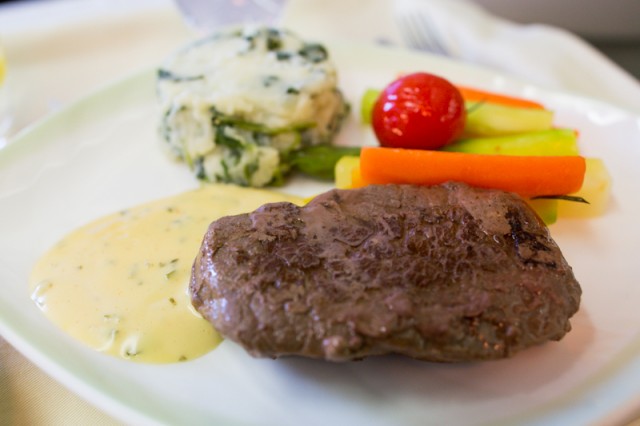 Even better was that the dish was not available inside the onboard menu. No, this was from EVA’s online pre-order selection, which includes several off-menu items for your choosing. A handful of carriers also do a book the chef-style option in business, and I’ve used it several times in the past. Sometimes they’re better, sometimes they aren’t, and sometimes what you get does not remotely resemble what you ordered. Thankfully the dish was both what I ordered and quite wonderful; a win-win.

THE COMPETITION: Flight Review of Business Class on China Airlines’ Boeing 777-300ER from LAX to TPE

In any case, the culinary adventure was capped off with a delightful apple cheesecake, complimented with a gin and tonic. Unfortunately the days in which the carrier served top-shelf Dom Perignon champagne are gone. 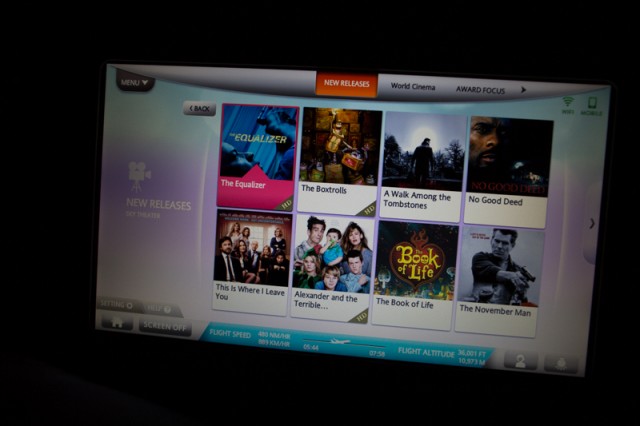 The flight not even close to half over, my attention turned to the in-flight entertainment. Each passenger has a 15.4-inch screen that swings out from the side of the seat, along with noise-canceling headphones. The system itself is run on a either Panasonic’s ex2, or the newer, much-vaunted ex3 operating systems. Which of the two operating systems you get depends on the age of the airplane, though EVA has noted that feature commonality will eventually be evenly matched between the two. Background operating systems, however, will not change. In either case, it can be operated via touchscreen or a tethered-touchscreen remote. 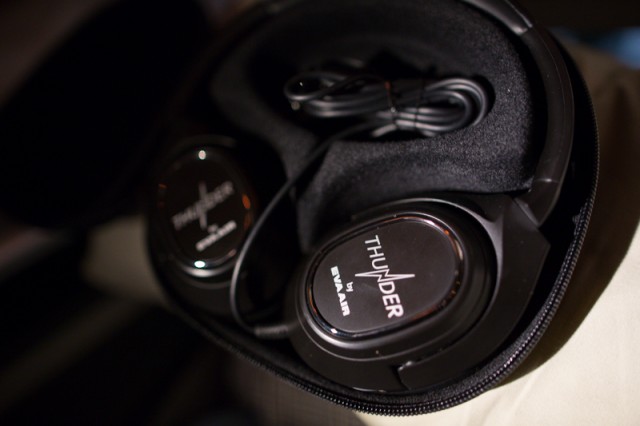 The noise-canceling headphones given to passengers to use  – Photo: Jeremy Dwyer-Lingren | JDLMedia

Choices include the usual fare: movies, TV, music, map, etc. For Western (read American) travelers, the media selection is somewhat thin. Not many hot releases are to be found, though a decent selection of older movies is available. TV has next to no choices, unless you’re a fan of Taiwanese shows (which were pretty fun). 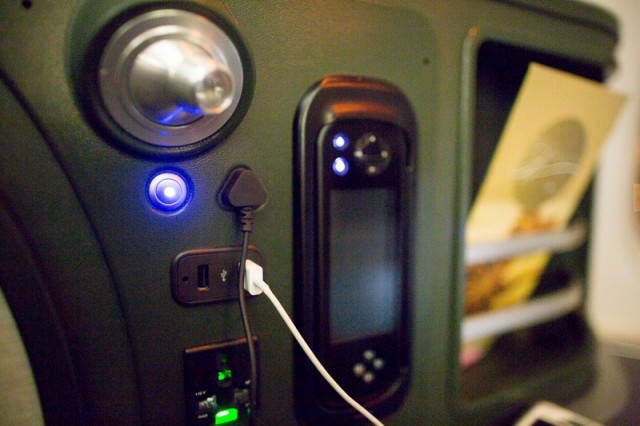 I listened to some good classical music selections while nursing a cup of tea and working on a few projects.  The seat has one universal power port and two USB ports for charging, as well as a large pull-out table for working space and reading light.

It was finally time for some sleep as the halfway mark came up somewhere over far eastern Alaska. Each seat features full-flat recline with 26 inches of width. A pillow and heavy blanket are provided. Thanks to the one-two-one, reverse-herringbone layout, the cabin space is nicely private in feel.  Despite a consistent chop, I slept for the better part of six hours, far more than the two I had intended. 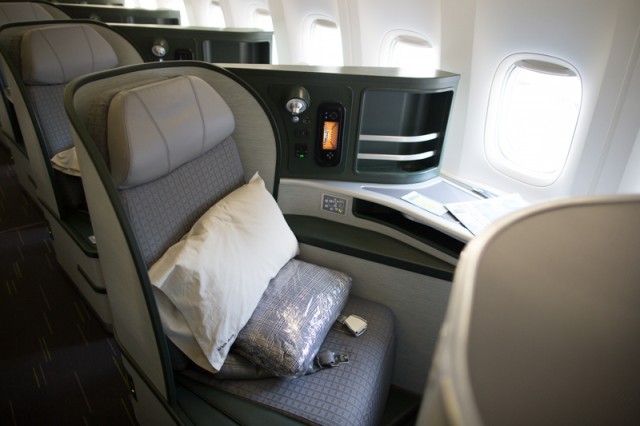 I was awoken by the cabin lights with maybe two hours left in the long flight. Twas time for breakfast, despite the local time in Taipei being mid-evening. As many Asian carriers do, choices included both Western and more local fare. Having chosen a more-or-less Western meal for lunch, I opted instead for the Chinese option. 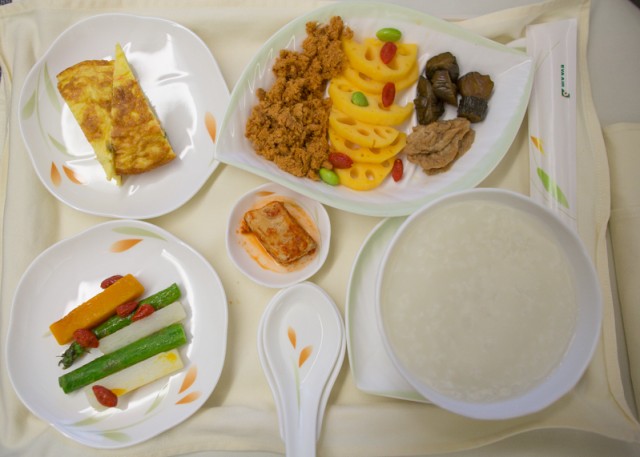 Unlike the multi-plate meal earlier, breakfast was served all together. The main course was congee, a Taiwanese dish of rice similar to porridge in consistency. It came with several vegetables, shredded pork, and fruit to mix in. A quiche complimented the entire setup. Each was quite tasty; the shredded dried pork in particular.

The flight landed on time at 10PM local time, whereupon we quickly taxied to the gate at Taipei-Taoyuan International. The long walk from the gate to immigration was met with a line for immigration of moderate length, maybe twenty minutes.  Once through, and with no bags checked, it was a quick jaunt to a waiting car outside the terminal. 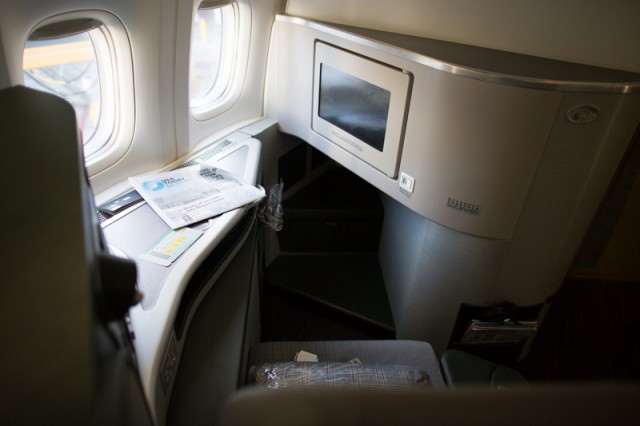 There was plenty of storage on the Eva 777 business class product  – Photo: Jeremy Dwyer-Lingren | JDLMedia

Bottom line
Royal Laurel is a dependable choice in a market overflowing with highly-respected premium products and service.

Food was good and well-portioned. Snack options in between set meal times were varied and good as well. Service was friendly and extremely efficient.

The entertainment options may strike one as a sticking point, but it matches what I’ve seen and experienced with other carriers in the region.

The product was very good. EVA was the first to introduce lie-flat in Taiwan, and made a solid decision in going with Zodiac Aerospace’s well-respected Cirrus seat.

If you need to travel to Taiwan, EVA Royal Laurel is well positioned to provide a restful, relaxing experience. 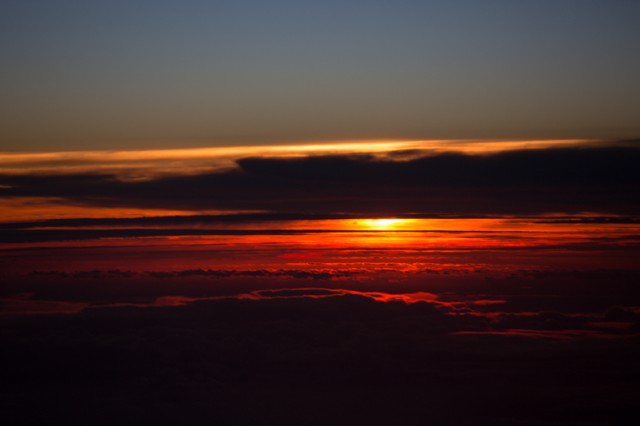 The sunsets about halfway into my flight… beautiful – Photo: Jeremy Dwyer-Lingren | JDLMedia

Looking to book?
EVA’s Royal Laurel can be found only on its Boeing 777 fleet, while the older 747 and Airbus A330 fleets feature a less involved Premium Laurel angled-flat product. Otherwise, the carrier serves Taipei via New York, Los Angeles, and San Francisco with year-round 777 services in the US. Seattle rotates seasonally between the 777 and 747.

Disclosure: EVA invited AirlineReporter on board on its dime for a one-way Royal Laurel ticket. It also provided two night’s accommodation in Taipei. Our opinions remain our own.

This story was written by Jeremy Dwyer-Lindgren, who is a freelance photojournalist and aviation journalist based in Seattle. Reach him anytime at je****@JD***********.com

Too bad about the Dom not being served anymore. I read it was replaced with Veuve La Grande Dame. Is this accurate?

It appears they rotate the ones that they use. So, cannot always count on a particular one.

Interesting. Any word on the list they use in the rotation?

I have an upcoming (in May) trip for work to Thailand, so lots of options to get there from Toronto. I was thinking of flying EVA due to the fun extras (like the Dom) I heard about. But if this changed I may fly CX or another airline instead.