The airline, as a whole, has been around since 1926 (in some form or another), during which time they have been through a number of liveries.  What better way for an airline to receive their latest aircraft than to paint it in an retro livery? 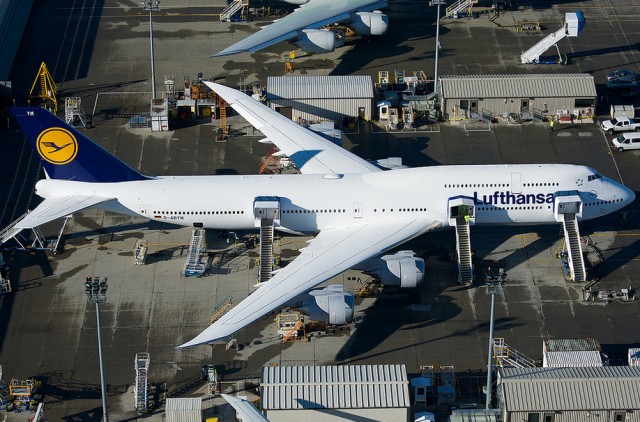 Lufthansa 747-8I’s have been a consistent sight throughout the world — flying in and out of their Frankfurt hub.  As Boeing produces the aircraft (at a mind-numbingly slow rate of 1.5 per month, to be further reduced to 1.1 later this year), the majority of these new Queens of the Sky have been for this German airline.  But they all have been in their latest ’œEurowhite’ livery.  Some people believe that the Eurowhite can be quite boring, however I do like the livery on the 747-8I.  It still pays homage to some of the original elements of the livery from the airline’s early days in the 1920s. 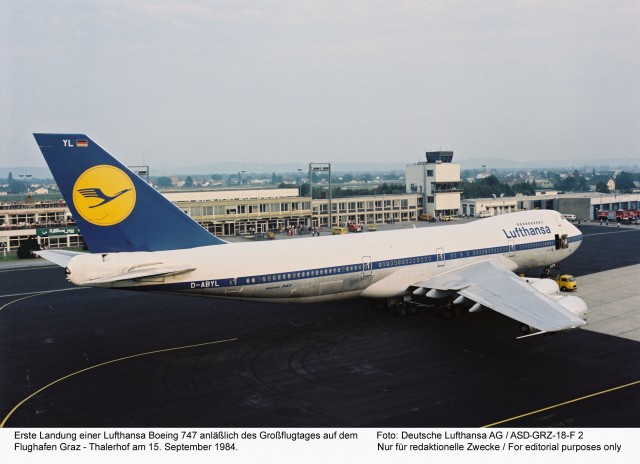 The earliest days of Lufthansa (seen before the airline was officially formed) saw the airline with a boring old grey paint scheme.  But that was in the days before airline liveries really even existed.  What it did have was the Lufthansa logo, which was a stylized crane in flight.  That logo has stuck with the airline and over time has been modernized as well.  When the 747 was introduced in 1970 it wore the livery that Lufthansa took into the Jet Age.  That livery, however, could not fully come back to life on newer aircraft. 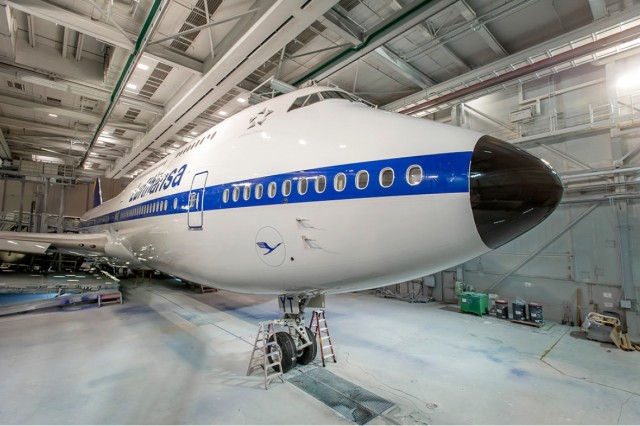 As you can see the new 747-8I livery is slightly different.  Unfortunately, there will not be a bare metal belly on this aircraft, painted in a slightly less-shiny grey.  So think of this retro as a more ’œtribute’ than a true re-creation.  Sadly, with the introduction of composite materials into the building process, aircraft just can’t have a bare metal finish; one of the reasons American Airlines ultimately changed their livery.  So the grey is about as close as we can get. 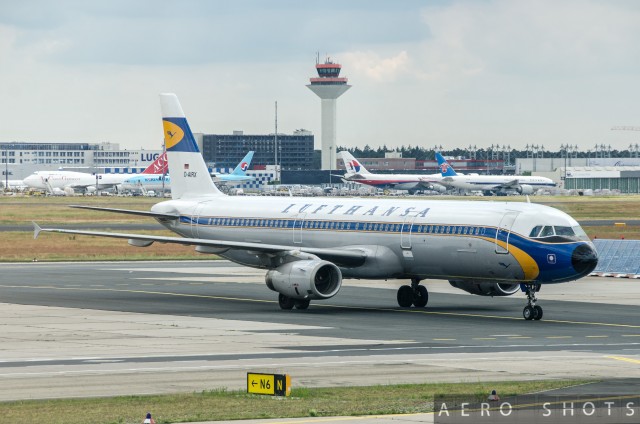 The Lufthansa 50th Anniversary retrojet livery. Seen here on an Airbus A321 in Frankfurt.

This retro livery is not the airline’s first.  The first Lufthansa Retrojet was painted in 2005 to celebrate the airline’s 50th year of operation (post-war).  That livery was painted on an Airbus A321; the original bearer (D-AIRX) has since been repainted back to the standard livery.  Fret not, fellow AvGeeks, as Lufthansa kept the livery going and is still flying another A321 (D-AIDV) in that same 50th Anniversary Livery.

With Lufthansa coming into their 60th year of ’œPost-War’ operations this year, it was obvious something was going to be done to celebrate.  Thankfully, Lufthansa took it upon themselves to create the world’s largest retro livery aircraft.  Who are we to fault them?

Dear Mal,
thank you for your apt comment on Lufthansa’s livery history. The 747-8 in the old Otl Aigner-designed livery is truly a bit of a compromise, some details don’t sit right for my liking, for instance the circled crane logo underneath the cheatline at the bow of the aircraft has too thin a ring to match the actual crane icon, and the grey belly colour is a bit jarry, but then, you can’t have it all. I am old enough to have flown in a LH 747-130 back in 1971 (Cologne-New York), and the Lufthansa livery certainly looked very neat, clean and timeless back then.

Clean lines and designs that actually complemented the aircraft shape were very much the order of the day back then: BOAC, BEA (both the black/white/red scheme and the later bluegreen and half Union jack scheme), Pan Am and TWA come to my mind, just to mention a few.

Of the new-ish design favourites of mine are the BA period when the aircraft tails all saluted artists from the various countries the airline served. That to me was one of the most inspired airline looks of all time, as it showed a sort of stylish respect to the world I have never seen before (apart from Qantas’s Wunala Dreaming 747s) or since.

Keep up your good work! I enjoyed reading it!

Hi Mal,
Greetings from Brisbane, Australia!
It has been a while since you wrote this article about the LH B747-8i retrojet. I’ve only just come across it now while reading about the B747-8i in passenger service.
Regarding the use of grey paint where the original had bare metal, it seems several airlines including Qantas have similarly used grey paint on later (B737-838) retro jet aircraft.
I still wonder why silver paint cannot be used instead as it would be much closer to the unpainted aluminium in colour?
Airlines like Jetstar in Australia and have silver painted aircraft and surely the same silver paint could be applied in lieu of the grey?
Just my thought on the subject.
Cheers from Down Under,
Mike.