With scores (over 18,000) of AN-2s built and almost 6000 MI-2s- they were the ubiquitous work horses of the Soviet Union. Even stars of stage and screen! 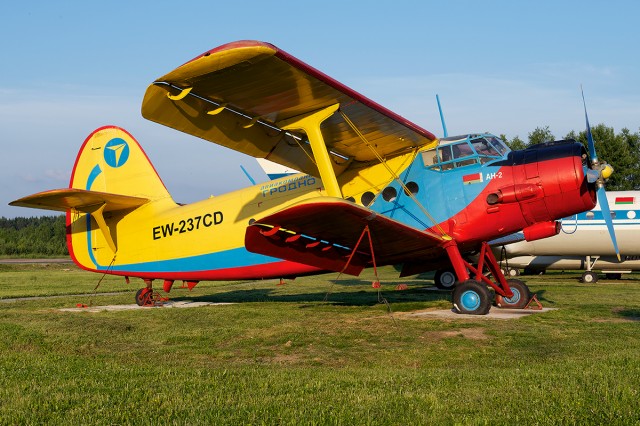 Let’s start with the true legend of Russian aviation: the AN-2. It doesn’t look like much on the outside, but it has many amazing qualities.

My favorite being that it has no stall speed. Seriously – you can’t stall it. I am not saying to go take your AN-2 out, put it into slow flight, and see if you can prove me wrong. AN-2s can crash; a day before I was to fly on an AN-2, one was lost and everyone on board perished. Don’t tempt fate, but understand that this is an aerodynamic masterpiece.

The AN-2 stemmed from the fact that the Soviet Union needed an agrarian support aircraft. To clarify, this agrarian support aircraft needed to be capable of not only crop dusting, but carrying a payload of 1760lbs. The military, of course, saw this aircraft and demanded that not only could it carry payload- but it must also carry ten soldiers. Naturally, it was to be powered by a family of radial engines from the Shvetsov design bureau. The first of this line was the popular ASh-21. 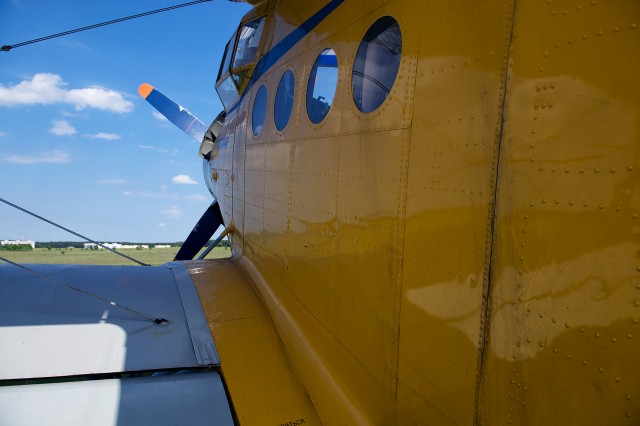 Boarding a different AN-2 – I could never get a shot of that one as I was told to always keep moving near that airframe                 Photo: Bernie Leighton | AirlineReporter

The AN-2 has served with distinction around the world, except in North America, where prejudice makes it illegal to own or operate them.

It is even considered classified technology that is not for photography by the People’s Korean Air Force. There is no job it can’t do, no task too small – just make sure the task is one that requires a very short take off, landing, and low altitude.

To fly on an AN-2 is a very different experience than any other aircraft I have flown on.  First, it’s a biplane. On top of that, it’s a tail-dragger (therefore, the aircraft has a distinct backwards lean). There are no seat belts, the chairs are foldable. It’s not much in the name of comfort. 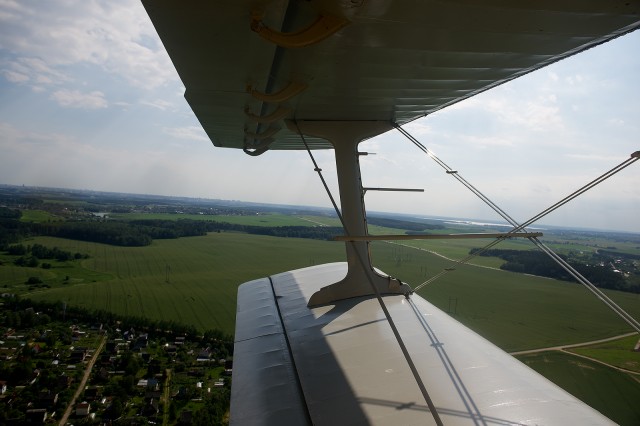 Wing view out of an AN-2 – Photo: Bernie Leighton | AirlineReporter

On top of that, the Shvetsov is the loudest piston engine I’ve ever had the pleasure of dealing with! There’s always some sort of rattle, a new hum – I am pretty sure I could even hear the cam shaft cycling. Nothing beats the sound of a radial engine to some people – with this aircraft, I finally got the appeal. There’s always something new; be it a sputter, or a clank, or just random knocking.

The problem with the AN-2 and its complete lack of seat belts became apparent with the take off. We were getting thrown around from every bump on the field. When we were airborne (in under 200 feet), it was apparent there was a lot of convection in Belarus that day, at least around Borovaya. The AN-2 is a sturdy aircraft with reasonably-high wing loading (~79kg/m^2). The problem with sturdy aircraft is that while they are easy to fly, they are terrible in terms of passenger comfort. Tossed around and hanging onto the parachute straps is how I would describe the flight.

At some point, we flew through a light shower. Given the aircraft is of the stressed-aluminum-skin variety, this was a wonderfully loud drum beat to accompany the already cacophonous Shvetsov.

Just as it looked like we were coming back to Borovaya for an (appropriately short) landing… the pilot gunned it and initiated a go-around (which threw most of us backwards).

After flying the pattern once more, we landed in less than the length of the aircraft. I wish I had had more time to take photographs, but a man in camouflage was hustling me towards my next ride; the MI-2. 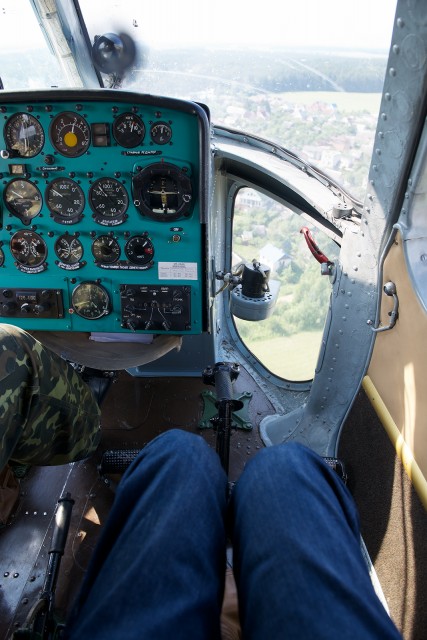 Leg room on the front seat of an Mi-2 – Photo: Bernie Leighton | AirlineReporter

Luckily for me, I was ushered to my usual position in a helicopter, the front seat!  Oddly, Russian helicopter pilots fly from the left, like traditional aircraft. In North America (and I have no idea why) helicopters are a right-hand-fly affair.

The MI-2 is the perfect complementary aircraft to the AN-2. Can’t land an AN-2 but need to carry a proportional payload to the same spot? Well, why not use one of the most mass-produced turbine helicopters ever made? Even better, this thing redefines the meaning of the word “loud aircraft”. Seriously, it’s hard to hear the blades spinning over the noise from the Isotovs!

Like almost every Mi-2, this one was produced by WSK-Swà­dnik (now AugustaWestland) in Poland.

It can carry eight people or a payload of approximately 1600 pounds.  There were only four of us.

Notice the similar numerology to the AN-2. Unlike the AN-2, however, the MI-2 is a military helicopter first and foremost. It’s primary missions were battlefield liaison, troop and material transport, light attack, and medivac. In the civilian world, its application was guaranteed to be agrarian. Indeed, one could also affix the same agrarian equipment to the military version and use it for dispersal of chemical weapons.

It’s very stable and versatile helicopter. Unfortunately – and this is my one complaint- someone left the door on! 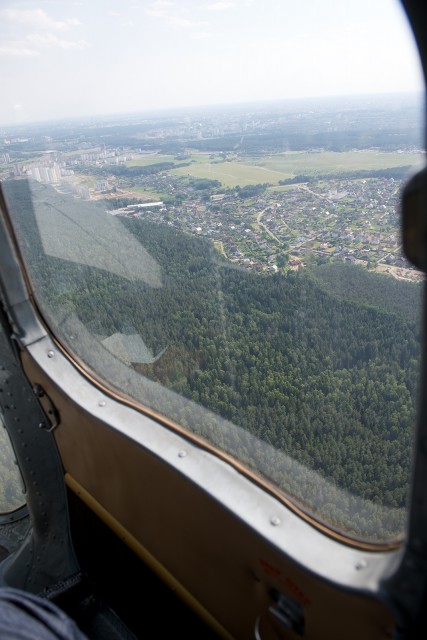 Also makes the aircraft feel a little lacking in shoulder room. The seat itself is great, more comfortable than an R-22.

The noise is better, and it is by far the most stable helicopter I have ever flown in. I know that it can’t be pilot skill that made the aircraft feel like it was floating in smooth air with only engine vibration to rattle my teeth as my usual cadre of photo pilots have thousands of hours apiece. This is just a very stable helicopter.

Maybe I am jaded – I know the other passengers thought the take off was “sporty” but I thought it was sedate and professional, but I really wanted them to turn the Mi-2 out for me. If there is ever a time to vomit it’s in Belarus, and I never even got close! 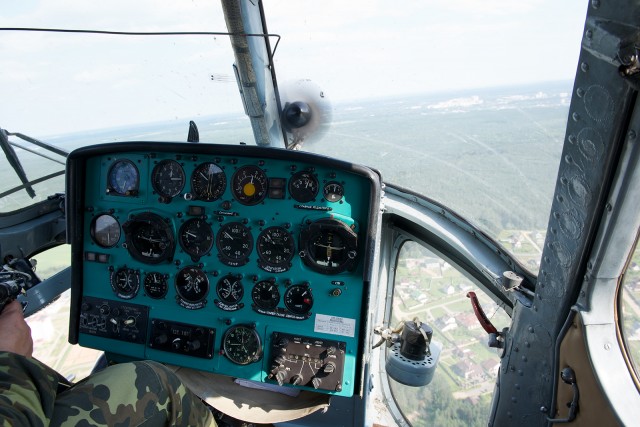 The flight deck of an MI-2. Shame the units are metric, as it just confuses me – Photo: Bernie Leighton | AirlineReporter

The flight itself would follow the same track as the flight of the AN-2 minutes before; that is to say, out of Borovaya and over some of suburban Minsk.  I, however, was more focused on appreciating the noise and watching the little soft-rubber fan spin. I’d just seen Minsk from above, I was here to purely appreciate one of my favorite helicopters. One I was finally on, no less!

For those wondering about the fan, you can touch it. They’re not sharp- that’s why they’re not in a cage. It’s classic Soviet ingenuity. I am sure this is apocryphal,  but legend has it that a rubber fan was cheaper than a metal fan with a cage. The pilots liked it, and it stuck. 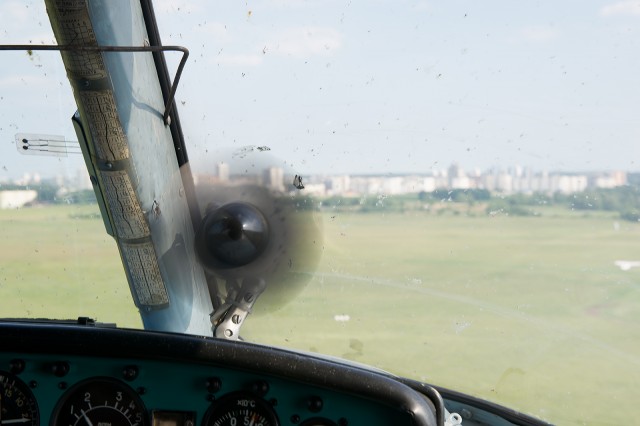 After fifteen minutes of sedate photo-flight conditions, it was time to show off a little of what this aircraft can do. So we did a low pass. Then we turned on our axis, came in, and landed. There was even a little bit of dust thrown up by the rotorwash.

Having said that, I loved the MI-2 more than I expected. I am quite taken by this little aircraft and would very much love to pop the back door off one, harness into it and have it hover, like an anchored boat, over my usual place of operations and just shoot away.

Yes, I know how much that’d cost outside of Belarus, but the MI-2 is so amazing that it’d be worth it.

https://www.airlinereporter.com
My First Flight on the Airbus A350 XWB
Booking a Weekend Away to San Diego… On the Fly
2 Comments