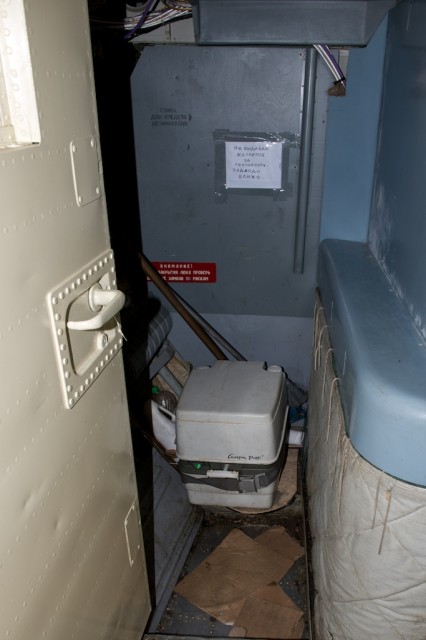 The lavatory of an IL-76TD – Photo: Bernie Leighton | AirlineReporter

This time on the IL-76, they let us take photographs. Lots and lots of precious photographs! So, because of this, it’s time for a history lesson.

The IL-76 was built as an inter-theatre cargo hauler for the military. On top of that, it was useful for pretty much anything. Hauling and delivering VDV (Soviet Airborne) troops, AWA&C duties, airborne laser experiments, anything America has ever done with the C-141, C-17, or C-135 platform, the Russians have tried with the IL-76. Sometimes with hilariously terrible results.

The IL-76 itself originated from a requirement to meet the Soviet dream of complete strategic airlift capability. In other words, they wanted the ability to move men, machine, and material across the world at a moment’s notice. Power projection. In the 1970’s, the Soviets used to practice moving entire divisions across the country, an act entirely possible because of the Ilyushin.

The first Ilyushin 76, the static test aircraft, was assembled entirely at Ilyushin’s facility in Frunze (also known as Khodynka). The rest were produced all around the Soviet Union’s index of aircraft assemblers, with many of the major subsystems originating from TAPOiCh in Tashkent, Uzbekistan (and the vast majority of frames).

The IL-76 excelled at strategic airlift – it was used to move Cuban troops to bolster the puppet state within Angola – but the big combat test came in 1980 after the GRU and KGB could not hold Afghanistan on their own any longer. The IL-76 did a fantastic job in hauling the Soviet Army’s equipment in and out. Ironically, some of the same IL-76s ended up bringing contractors and smaller armies into Afghanistan to fight the same enemy once more after the events of 9/11.

Today, the Russians use the IL-76 for the same reason they always have, but it is seen more as a “tramp steamer” of cargo aircraft. Servicing darkened airports to drop off pallets of ammunition of questionable legality. Last resort hauls of sea food. Things ACMI, freight forwarders, and everyone else can’t do.

That’s actually a very profitable niche, especially when maintenance costs often consist of picking a donor part off an adjacent aircraft.  960 frames were built, with roughly 1/4 of that still in flight, so parts are readily available.

I am obsessed with the Soviet War in Afghanistan, so I boarded wondering what it’d have been like to have been strung out on socialism and a patriotic desire, instead of being strung out on exhaustion from a full weekend of nothing but Russian planes. It made the extremely spartan “troop seats” a lot more comfortable. Yes, those yellow lobes are ear protection and they did come in handy. 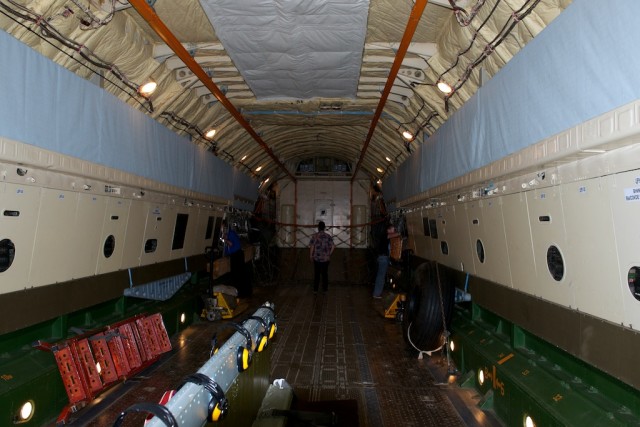 The best view of the central troop seats I could manage without risk of personal injury – Photo: Bernie Leighton | AirlineReporter

Shortly after I took the above photograph, a little red light started flashing. There was a large ‘thud’, and the cargo doors began to open.

I put on my ear protection as I realized that, much like other Soviet cargo aircraft I have flown on, we’d be taxiing with the cargo door open. It’s a lovely, concert-like experience. Unfortunately, the best concerts are also the ones that are so loud you need ear protection to hear all the nuances.

Startup was like that one time I saw the Screaming Females and Garbage on the same night. Multi-tonal, beautiful, and perfectly loud. I took off my ear protection for a second to be… rewarded by nothing but the sound of a high-powered blowtorch and a screeching cat, all then run through three different poor-quality amplifiers.

Western aircraft, by comparison just have none of that diversity. Russian planes of the same make may sound alike, but not identical. This IL-76TD had the exact same engines as the IL-76MD I flew on in DPRK, but a completely different tonality.

If that was not enough, we climbed at a much steeper rate than I expected. I know the IL-76TD can take off with a max weight of about 190,000kg, and there were only 12 humans on board as well as empty fuel tanks. The thing blasted off like a rocket. I didn’t know the Solovievs had it in them!

Thankfully, there were seat-belts for everyone and the aircraft was so big that even with only a tiny amount of windows I never once lost any sort of spatial awareness or started to feel airsick.

Once we leveled off over Minsk, the red light flashed again. 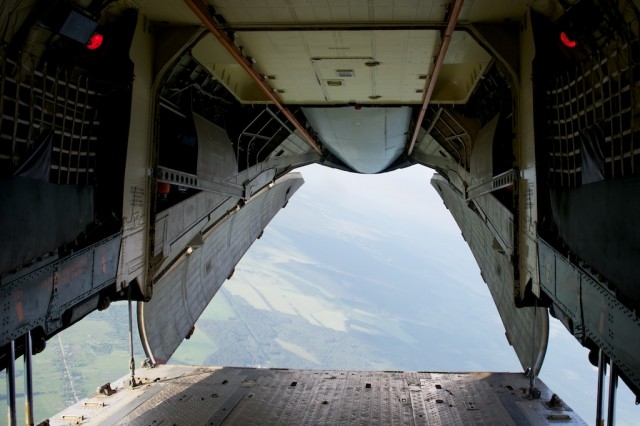 View out the back of an IL-76TD, in flight – Photo: Bernie Leighton | AirlineReporter

If one had a parachute, you could probably have had a great jump out of the aircraft. However, due to the fact none of us had chutes there was a (not photographed) thinly-meshed cargo net to keep us from getting too close to the action. Having said that, the breeze was easy to feel.

So that’s how we cruised; door open, drinking water, taking pictures, and touring the flight deck.

Eventually we were, half-heartedly, ushered back to our seats. It was time to land. Clearing through the paint-mixing, convective, turbulence around Minsk-2, we got to about 700 feet and then the throttles fire-walled. Even before then, the pilots were constantly adjusting the throttles (as they should be for any approach), but unlike Western aircraft, you can hear it before you feel it.

Yes, my first commercial go-around was on an IL-76 and yes it was VERY loud. The throttles going to full is awesome beyond words, so is just how fast and steeply the aircraft can climb (when empty).

The real landing was a much sadder affair.

It was time for another amazing IL-76 ride to end. 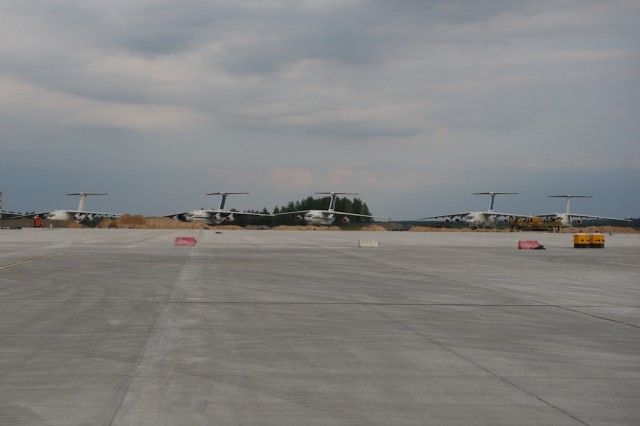 The good news is, there are lots of IL-76s in service – this may not be the last flight for me.

Wow, that must be really been an unforgettable experience to be able to make a flight with this beast. It is a personal dream of mine, to experience IL76 Close Up like this.
I saw them once on the tarmac of an air force base in Germany – A green/blue Uzbekistan IL76 dream!

You are truly blessed to have had the opportunity to do so – congratulations!

With an open cargo door to fly, if I have understood correctly, you could even leave the places during which?

It must be an unforgettable experience to witness the flight in the glass bow, or in front of the open cargo door.

Given this event, the review is a bit short, will there be a second part with more pictures?

Please do not stop to write such reviews!

Thank you and best regards from Germany

Amazing Bernie, it looks really like an unforgettable trip

Wow, what a lovely review of a wonderful experience you had. I wonder – why do they fly ’em with the cargo doors open? I’m curious about that.

Hi Bernie – do you mind if I use a couple of your photos? You’ll be credited of course. I’m doing a video story about an incredible trip to Tajkistan I made for work in 1998 – flew there in an IL-76. I was in the navigator’s position in the nose for much of the flight, including touchdown and take-off again in Ankara. The video is likely to be seen by maybe 50 people if I’m lucky. It’ll be on Facebook in a private group and YouTube.
Thanks in anticipation