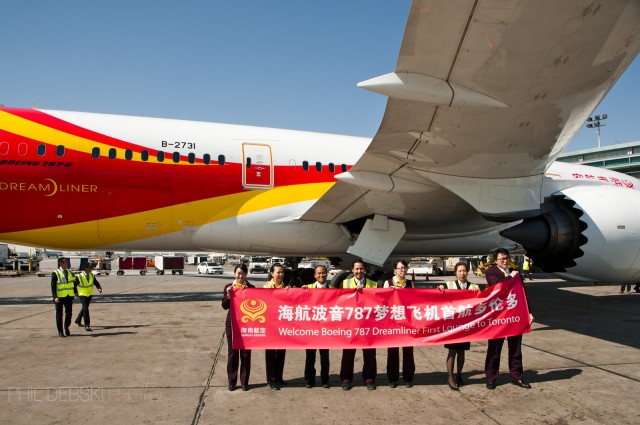 What looked to be the first true spring day here in Toronto, March 31, was the day Hainan Airlines finally inaugurated their 787 service to Toronto Pearson International Airport (YYZ). They started operating the route in 2010 with three ex-Cathay A340-600s (B-6508, B-6509, and B-6510, if anyone is interested).

Throughout the years the airline has had its ups and downs (such as varying frequency from 3x weekly to once per week) on the route. However, with the 787, Hainan will go daily this summer, a huge improvement to the Beijing-Toronto route. Hainan was also originally supposed to fly the 787 into YYZ starting May 1, but pushed it up to the earlier date in late February. 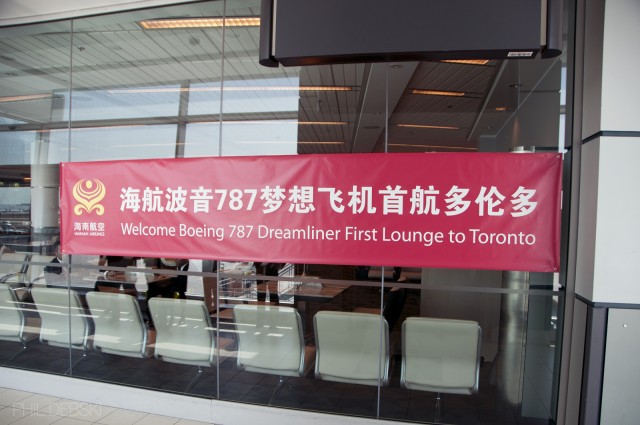 Custom-made banner shows that Hainan management here in Toronto are quite proud to receive the 787 – Photo: Philip Debski 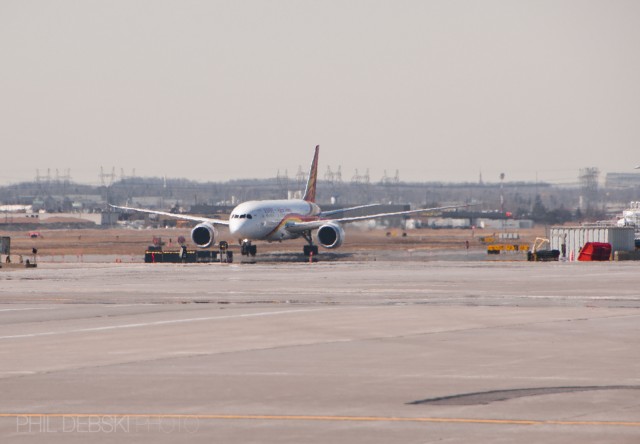 After talking to a few people and gathering some information, Flight HU7975 landed on Runway 23, and we were able to see it taxing in the distance. At this time, everyone associated with Hainan starting getting quite excited and pulling their cameras and phones out. 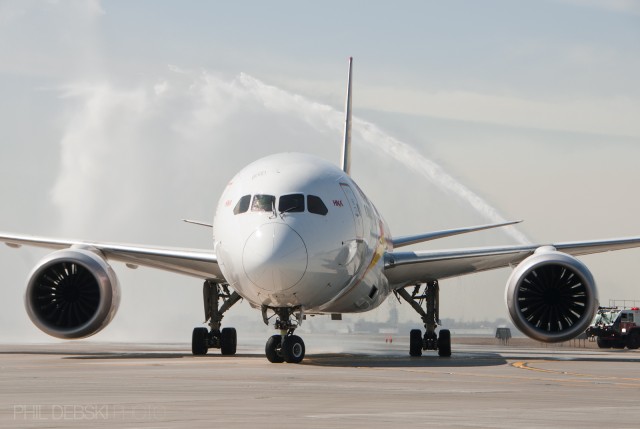 I was told earlier that the flight would have a water cannon salute upon entry of the apron. Once it was taxiing, I hopped in a car with an airport security guard and he drove me to a nice spot on the apron, with cargo pallets to stand on with several other Hainan employees. It was an amazing sight to witness. 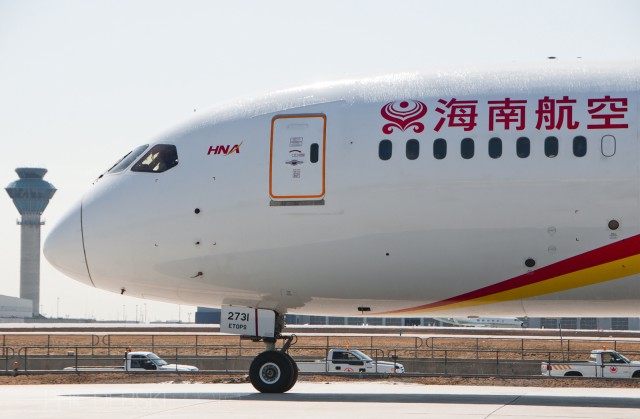 The 787 makes it way to the terminal – Photo: Philip Debski

The 787 was finally on the apron.  Having gotten my first glimpses, I hopped back into the security car and hurried to the gate before the airplane itself would pull in; luckily I made it. 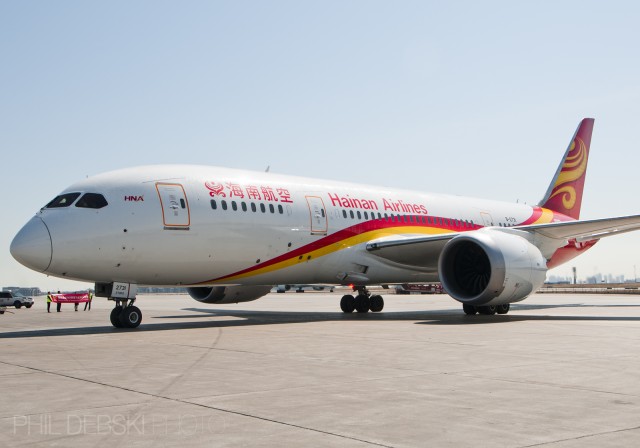 It is hard to find a bad angle with the 787 Dreamliner – Photo: Philip Debski

The plane pulled in to the Hainan crew holding a banner welcoming the flight. The crew were all smiles and full of excitement. 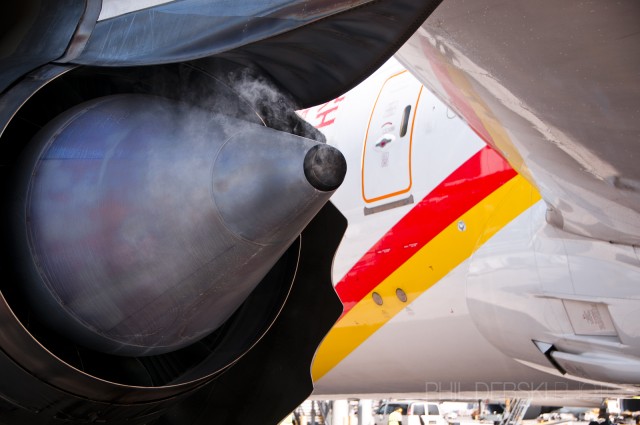 Getting up close to that GEnx engine – Photo: Philip Debski

After doing a brief walk-around of the aircraft, I became intrigued by the engines, capturing a shot of the cool-down of one of the aircraft’s GEnx jets. 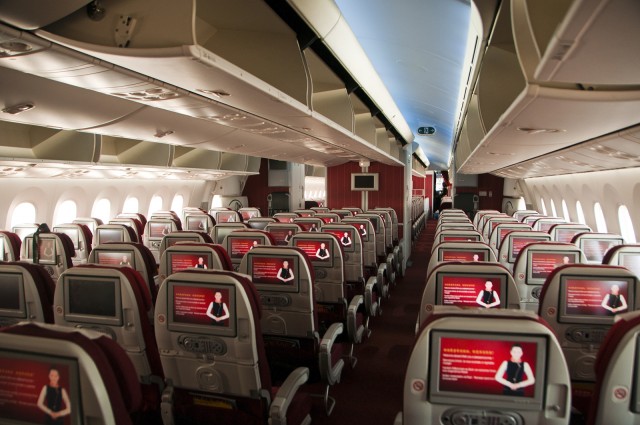 After cabin cleaners finished, I got to go inside the aircraft for a photo opportunity. Economy class is a standard 3-3-3 configuration, similar with other 787 operators. The cabin featured idling blue mood light, roomy overhead bins, and their quite-likable entertainment system. 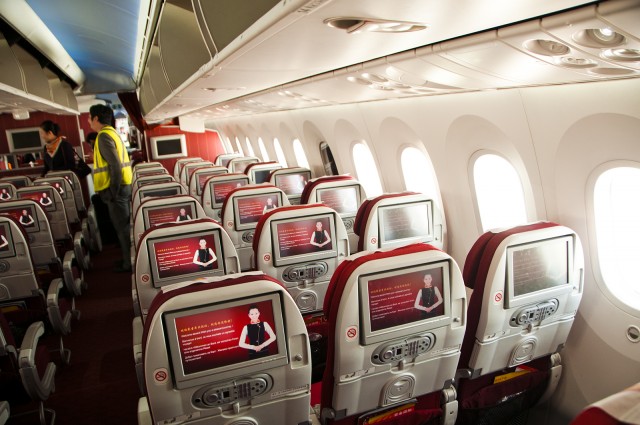 Each seat has an ample entertainment system – Photo: Philip Debski

The cabin color is abundantly red, quite associated with Hainan Airlines, or China itself for that matter. The seats have a pitch of 32 inches and a width of 17 inches. When I sat down, the seats were quite comfortable with a good amount of leg space. However, being 6′-5″, I’d probably have a little trouble staying comfortable for a 13-hour flight to Beijing. 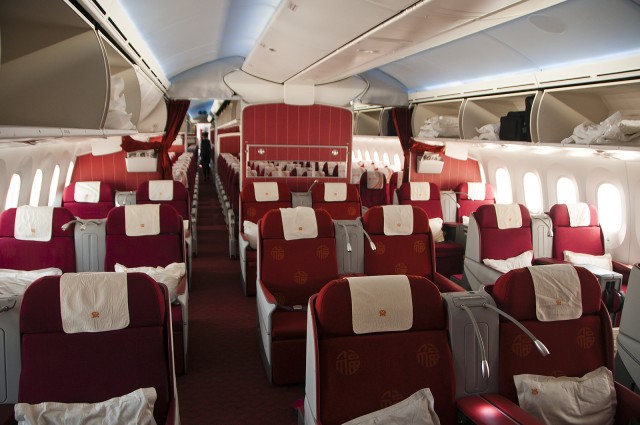 I had a quick glance at the second section of the business class cabin, although I wasn’t approved to sit in one of the flat-bed seats (not really sure why). With a pitch of 74 inches and a width of 22.5 inches with and amazing amount of leg room, they looked to be comfortable enough to be categorized as business class. 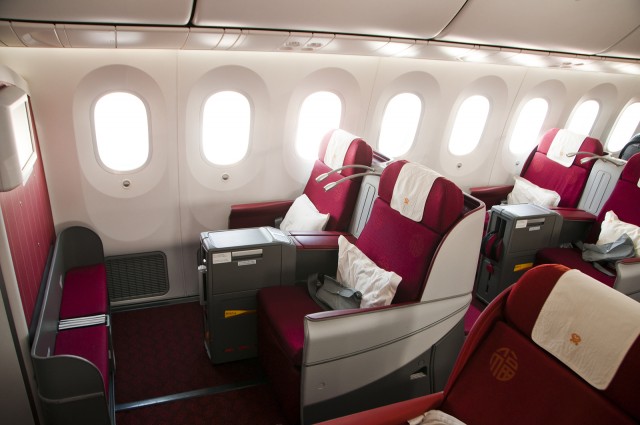 The product is not the best, but still appears to do the job – Photo: Philip Debski

Economy and Business share the same entertainment system with 15-inch personal screens at each seat. Fares in business for YYZ-PEK-YYZ go for about $1500-2200CAD, which is not a bad deal. 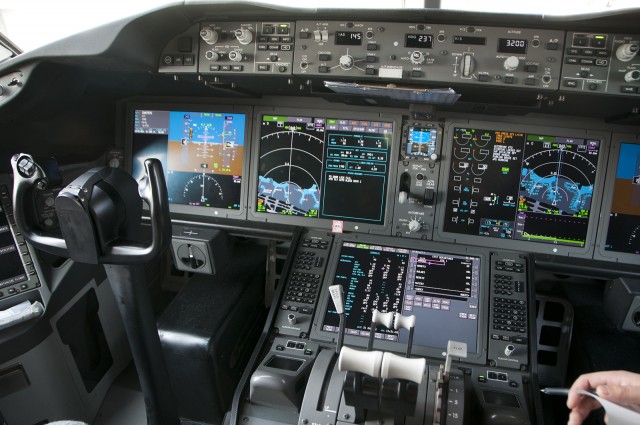 What tour of a jet is complete without a visit to the flight deck? Photo: Philip Debski

I got a quick glance of the flight deck and found that the First Officer was doing the weight calculations. 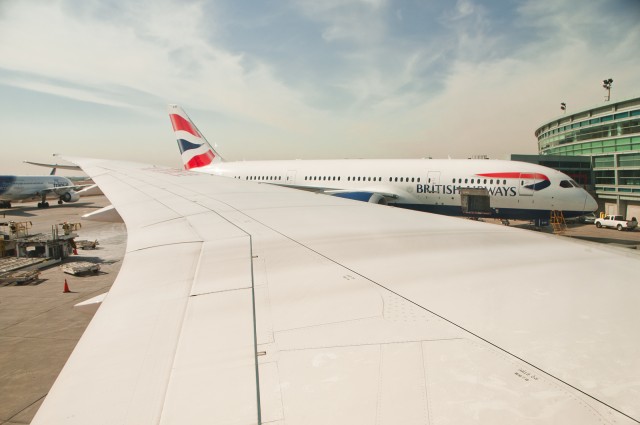 I then walked back to Economy and sat down for two minutes at a window seat, only to receive a surprise. BA parked their 787 (G-ZBJB) right next to Hainan’s at Terminal 3! The shape of the wing…lovely. 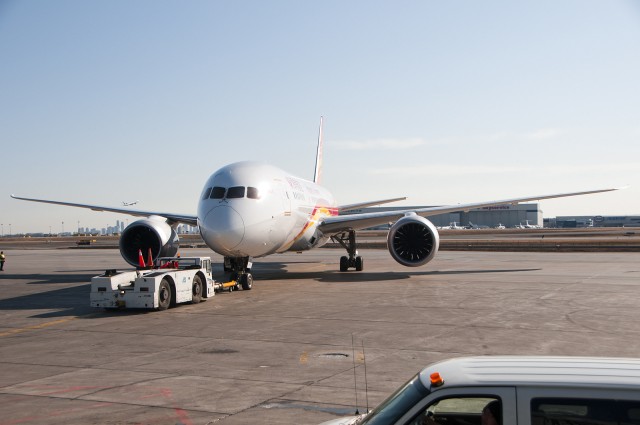 It didn’t take long for the plane to reload and head off – Photo: Philip Debski

After taking a break of about 45 minutes while passengers boarded, it was time finally for departure. Push-back commenced and I got into another security escort to follow the 787 as it taxied to the threshold of Runway 23 for departure. 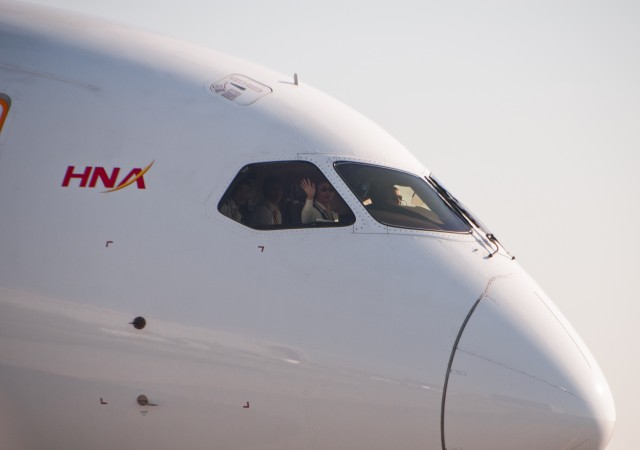 Before the taxiing away, I got a wave from the first officer. Kind of him to do that for a nice photo opportunity, on a glorious occasion! 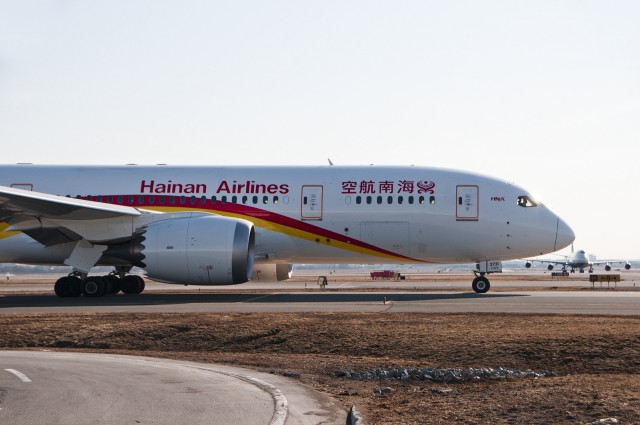 A BA 747 says goodbye to the Dreamliner – Photo: Philip Debski

Soon, HU7976 was about to turn on taxiway Hotel to taxi down to Runway 23, with a British Airways 747-400 in the background. I could only imagine that the BA crew was admiring the Dreamliner. 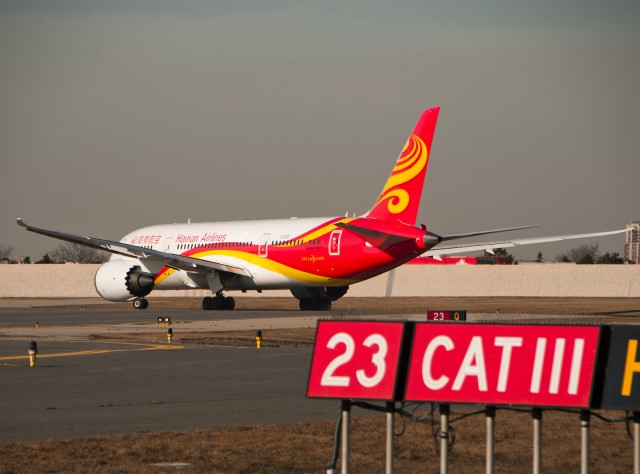 The Hainan 787, about to leave Toronto for the first time – Photo: Philip Debski

The aircraft is seen here lining up on Runway 23 from taxiway Quebec. Moments later, it was cleared for takeoff and thundering down the runway it went.

Of all airside tours I’ve received at YYZ, this one was by far the best. Again, I must say a big thank you to the Hainan management here in Toronto for allowing such a opportunity. The 787 itself has become quite the icon for them and they are really proud of it. I’d love to fly on one, one day!

Specs of this particular tour:

This story was written by Philip Debski for AirlineReporter.com…

https://www.airlinereporter.com
What I’ve Learned as a Frequent Flyer: With the TSA, Expect the Unexpected
Lufthansa Schools Us on How to Make A Better Inflight Meal
6 Comments

best report ever. so many nice and sharp photos. i hereby promote you to be editor-in-chief.

Hainan and the B787.
Does this sound familiar? Let’s see if I get some of this right: Over the last 18 months, airline has imposed substantial delivery delays and benefited from the Boeing and FAA-mandated down time. More than a few questions were raised about airlines’ genuine desire for the airplanes, but they maintained the order. At every opportunity, Hainan’s performance suggested that 1) they did not want the ordered airplanes and 2) were taking best advantage of every possible excuse to delay delivery and/or obtain new aircraft for less than the agreed price.
Best possible price is a routine business practice. Many use it with vigor and especially airlines buying new airframes from the Big Two. Most make their adjustments and quickly move on. Hainan apparently embarked on a course of nearly endless fault-finding, suggesting that the wre looking for a way ouoooooot and/or conld not come up with the hard currency. As I understand it, their early 787 airframes were subjected to more and deeper scrutiny than those of any other airline client. I suggest that Boeing was close to suggesting that Hainan take a walk and then stuff their order in a dark place. I guess they got the details worked out. Did Hainan have trouble coughing up the money? Yes. Were the airframes earmarked for Hainan any better – or any worse than those for any other buyer? Not likely; Boeing does not do that and cannot not afford to play those games. And yes, I certainly wonder why Hanian is so difficult. Their delays and nit-picking increase the net costs for all customer airlines, not just those with whom Hainan competes. Are they really that dense or simple-minded? I would like to believe otherwise, but evidence over the last 18 (+/-) suggests that they are still missing a cadre of senior executives that know what they are doing. Is Boeing’s introduction of the 787 flawless? Of course not. Have they behaved responsibly and properly to fix the early issues? Yes, and at horribly high costs. Most airlines have cooperated with Boeing in joint efforts to make the airplane as safe and inexpensive to operate as is possible. Hainain? Ah… I think not. Their approach was to demand repairs of everything and reduce the cost 10 fix everything to make perfect and 20 reduce price by increasing amounts. IMO, Boeing should have cut them loose and introduced them to Airbus, more than a year ago. Boeing has no need to deal with thugs and those few airframes can be adjusted for others’ needs in short order. To hell with Hainan. Seven eighty seven or not, I won’t fly a brand that apparently attempts to screw Boeing. Ever. Our nation, our region and Our Company are entitled to far better behavior from customers. The company and the region will do just fine without Hainan.

totally agree.
Cook’s comments are lengthy and rather confusing. Business is business and Hainan is prepared to order additional 747s however 1000 series.

Cook,your rant was amusing,but kindly elaborate on Hainan’s sins.
Other that that it is an awful airline- they canceled my flight 4 times!!
And the all the flights PEK-BKK were cancelled.
Afwul, afwul airline!!!

Cook,your rant was amusing,but kindly elaborate on Hainan”s sins.
Other that that it is an awful airline- they canceled my flight 4 times!!
And the all the flights PEK-BKK were cancelled.
Awful,awful airline !
PS