Being a non-schengen flight, the departure was from Terminal 1 at Prague Airport. I arrived about three hours early; it was interesting to see that Czech Airlines had dedicated check-in for the Seoul flight, with two dedicated business counters. My bag was priority-tagged and I was on my way to passport control within five minutes of arriving at the airport.Â  The security check takes place at the gate for all flights originating from Terminal 1.

Once onboard the aircraft, I was greeted by the purser and escorted to my seat. As the aircraft is an ex-Korean Air bird, the interior and layout is identical to their A330-300â€™s; the only difference with this one being the paint scheme on the outside is that of Czech Airlines. 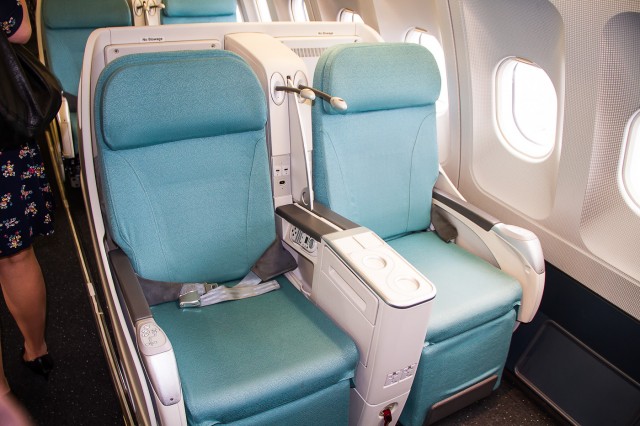 The layout of the cabin was somewhat interesting, as Korean Air used to operate this particular A330-300 with â€œfirst classâ€ – the seat itself was identical to the business class one, but first class was in only one row located at the front of the aircraft and separated by a bulkhead.

I did some research prior to my flight to see if I could get a seat pre-allocated in this cabin, but unfortunately the row is used as crew rest (there is no other crew rest on the aircraft). I had to make do with the bulkhead seat 7A. 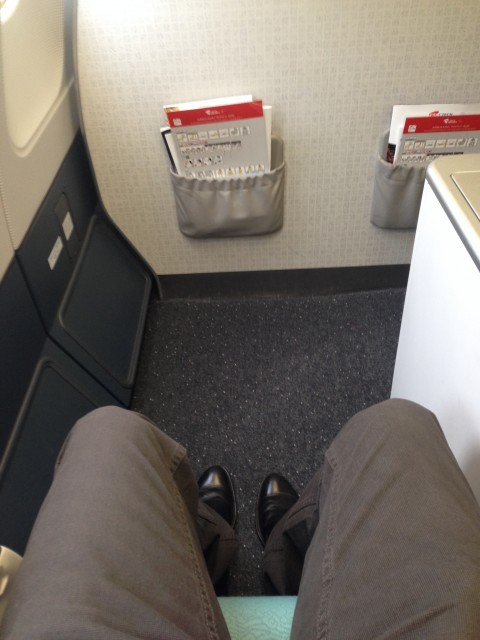 Unlike some bulkheads, this one was nicely spacious – Photo: Jacob Pfleger | AirlineReporter

Once I got settled in, amenity kits, slippers, and a wide range of literature (Czech and English) was distributed. A welcome drink of sparkling wine was offered along with some nuts. It was a shame that no hot towel was offered at all prior to departure.

It was nice, though, to see the welcome drink served in an actual glass and not plastic, as has been the case on my previous CSA business flights. 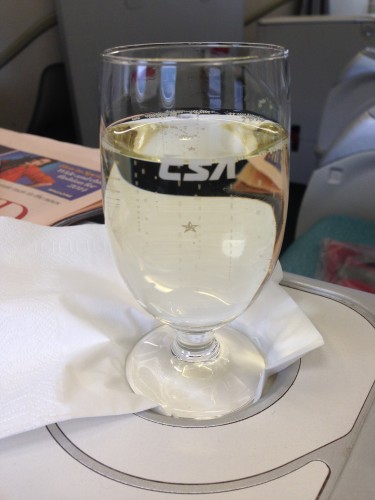 Given the full load in economy I was surprised that we managed to push back five minutes ahead of schedule.

After departure crew distributed the Korean landing cards, but they neglected to pass out fast-track cards for immigration (which I only found out existed after spending 20 minutes in the immigration line at Seoul). Food menus were also distributed.

The flight is carried out in close partnership with Korean Air (they even have a KE flight attendant on board to assist with Korean passengers and service quality). Â There were two options for the lunch service (western or Korean); I decided to go with the western option.

A pre-lunch drink service along with a mini canapÃ© of tuna on bread with lemon was served before the main meal service was set up.

For the main meal service, the crew placed a linen cloth on my tray table as well as the meal tray, Â which consisted of the salad, appetizer, and choice of bread and butter. 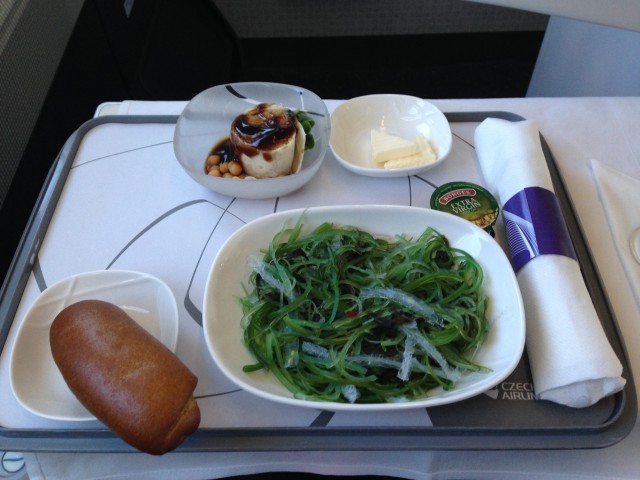 As I went with the western option, I was expecting that my salad would be of a western nature – but I was wrong. What I received was a seaweed salad (I would not even go so far to call it a salad, as it was just seaweed on a plate) with no dressing or seasoning whatsoever. Â There was, however, some olive oil that you could pour on it.

This â€œsaladâ€ really set the tone for the remainder of the meal service, and the catering was definitely the low point of the flight. The crew themselves even agreed this was the worst catering they had seen on the route. About three months ago, CSA changed catering providers from Alpha to a local caterer known as â€œGastro Hrochâ€ and ever since the transition to the new company the quality of the catering has deteriorated markedly.

Following the abysmal salad, it was time for my appetizer – which in this case sounded quite “appetizing” on the menu; pita bread with hummus. The reality could not have been further away, Â as this appetizer was not only rather small in size but the bread was dry. While this was not that annoying, what really made this meal uneatable was the fact that the whole appetizer was covered in soy sauce!

After this experience I was thankful for the delicious New Zealand Sauvignon Blanc to flush out the saltiness. For the western meal option, passengers are also served a soup; in this case it was a broccoli cream soup. 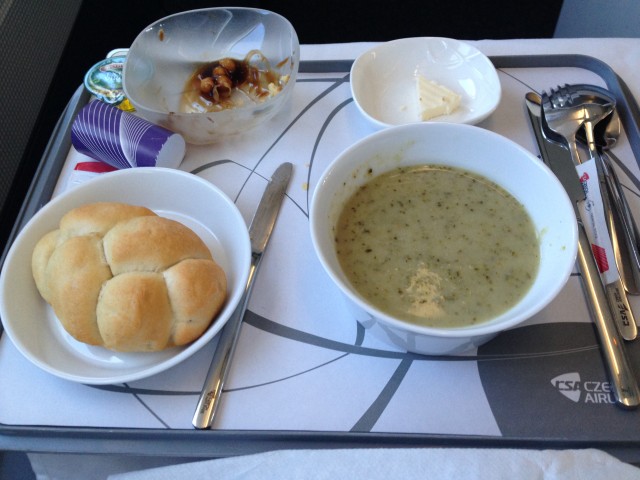 By this stage I was a bit hesitant and nervous on what to expect for the main course. When it arrived I was pleasantly surprised. The main consisted of some beef steak, along with potato mash and carrots. Overall, the steak was tender and juicy and the sauce was fine too. 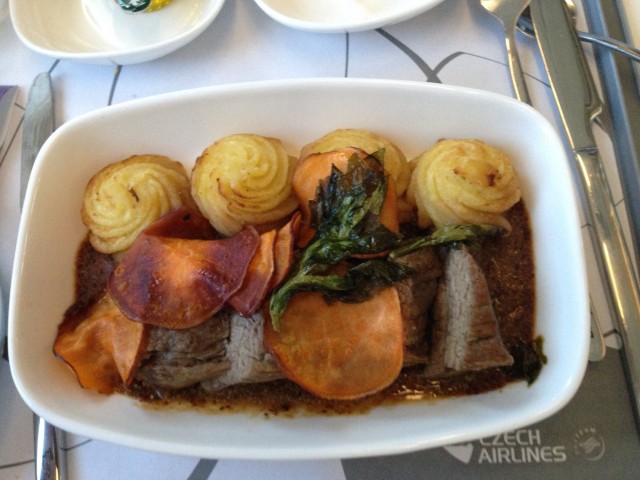 Once I finished off my main course the crew came to clear the tray away. The dessert options were somewhat limited; a fruit plate, packaged ice cream, and a cheese plate, as well as Sandman port. 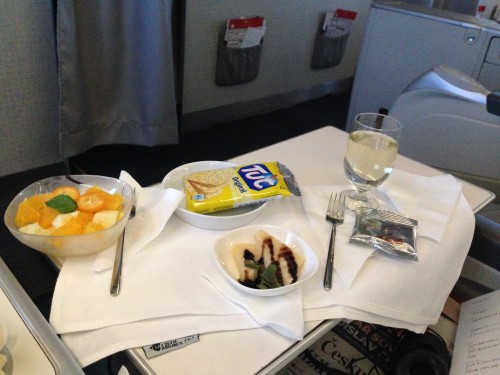 Following the lunch service I decided to explore the In-Flight Entertainment (IFE). Â The screen itself was sufficiently large, although not the biggest experienced in business class. The amount and variety of entertainment really was quite poor and I was glad to have brought my iPad with me on the flight to keep me entertained. There were probably only 10 movies and five TV episodes on offer, out of which about half were Korean. 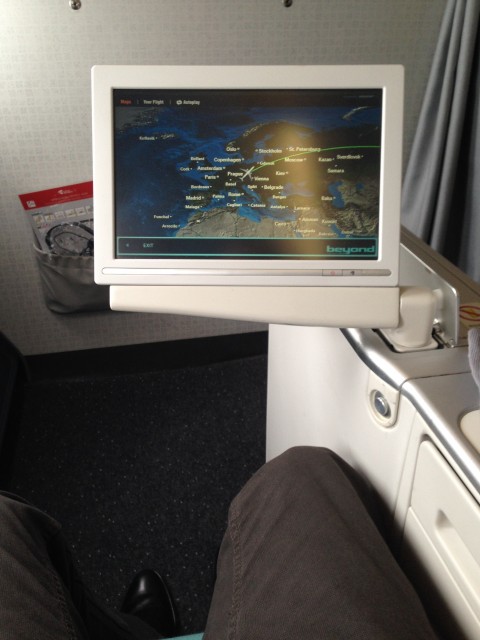 As the flight departed at 1:15pm Prague time, I knew I would get next to no sleep on the flight, but this did not stop me from exploring the seat features. Again, this is essentially a Korean Air aircraft with the seat being identical to other Korean A330 aircraft. Â The configuration is 2-2-2 with a very generous seat pitch, even for non-bulkhead seats. The seat itself is sufficiently wide and is fully lie-flat. The tray table is smartly concealed in the side panel of the seat, as is the monitor (bulkhead seats only). There is a small privacy screen that can be extended when the seat is in lie-flat mode. Overall I found the seat comfortable for the 10-hour flight, and am positive if it was an overnight flight I would be able to get a few decent hours of sleep.

As the flight was landing in Seoul around at around 7:00am local time, I expected to be served some form of breakfast on the flight for the second service but that was not to be. The Korean option consisted of some porridge-style meal, while the western option was a cold service consisting of salmon carpaccio. The salmon was fine and there was really nothing bad about this dish. 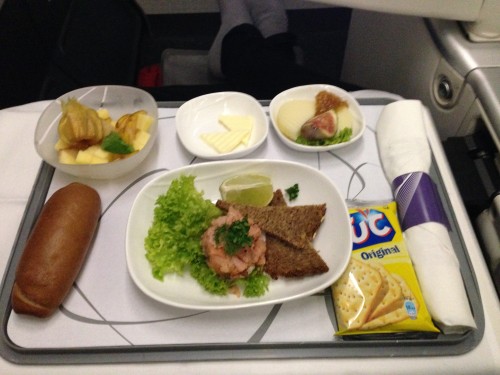 Arrival into Seoul was 20 minutes ahead of schedule. As stated before, I wasn’t given a priority card for immigration, which resulted in a 20 minute wait. I made my way through customs and onto the fantastic KAL limousine service to my hotel in downtown Seoul (about an hour drive).

Overall the flight was reasonably comfortable, and what made it truly memorable was the crew who were outstanding. Â Any request or call button was attended to promptly, and they were genuinely warm, welcoming, very easy going, and up for a good chat.

The biggest let down of the flight was obviously the catering, which I really think needs to be improved if CSA wishes to expand their long-haul network, and premium market share on the route.

Great review! I am surprised they had a KE FA onboard – that sounds like something quite rare!

Hey Matthew, yes it was quite interesting to see the F/A the crew informed me it was to assist with Korean passengers which considering 95% of them were it’s not a bad idea to have a Korean speaking crew member on-board.

Good review; BTW, ICN is noted for having a 19-minute average transit time through customs, compared to the 60-min. worldwide industry average (Wikipedia). Sounds like a great deal to me! How much time would the priority card have saved you, Jacob?

Hi Mike, Given that the priority line was about 1/4 the length of my line I reckon I would’ve been through in under 10 minutes having said that though the wait was not so bad in the normal line it was more the issue of CSA not handing out priority card to premium passengers which the other airlines did as was clearly evident.

Thanks for the heads up on this flight. I Am beginning to dread this flight. I, along with my classmates have found that via Seoul, we will be able to fly from Guam to Prague to compete in a competition. And this was the most affordable route. And since I’ve shared the post, most of my colleagues are dreading the meal service.

Hi, it should not be this bad CSA are making a lot of changes, will be good to hear what its like when you go.

Great review! I’m flying this route in Business next month. I’ll see if the food has improved after 4yrs 🙂 Was the sparkling wine ok? I do like a nice bubbly when flying business class. Lol