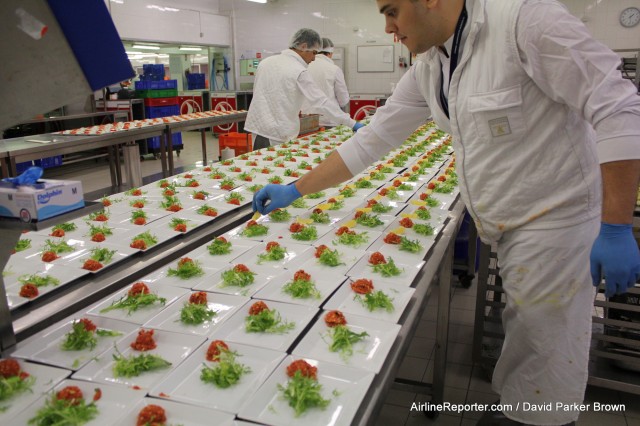 Attention to detail with the premium meals is important

The airline business is a complicated machine, where when one little aspect has a minor hiccup, it can affect thousands of people. What better way to see how complicated an airline is than to take a behind-the-scenes look at their catering operation? Recently, during a trip to Istanbul, Turkey, I was invited by Turkish Airlines to tour their catering arm, which is called Do & Co.

Some of the things I found were quite wonderful and surprising. 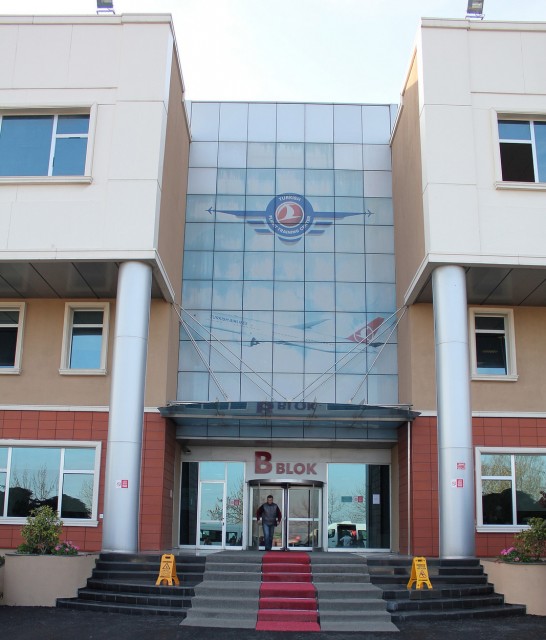 The lobby area of the Cabin Service Trainers were quite interesting. It was more like a coffee shop, with employees hanging out and relaxing, than it was an airline facility. 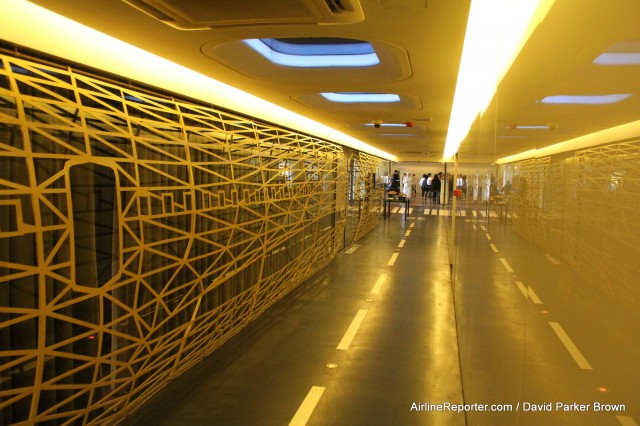 The Turkish trainers on the left; note the hallway that looks like a runway

Many airline operation centers I have checked out tend to be a bit more dry and boring. Although the facility has Boeing 737 and 777 cabin trainers, we were escorted down the hallway (which looked like a runway) and taken into the Airbus A340/A330 trainer. 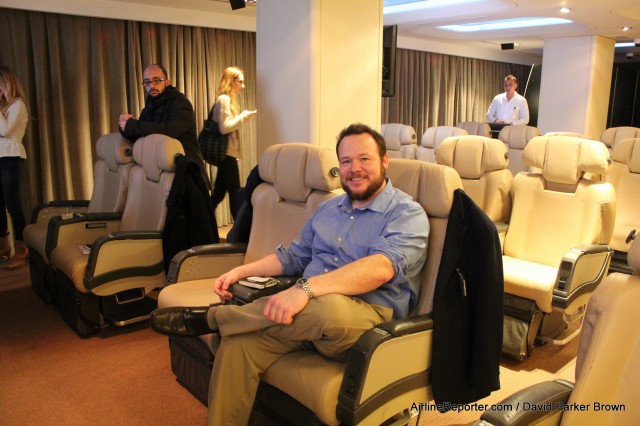 Chilling, like a boss, in the A330/A340 trainer while waiting for food

We were told this is where we would have lunch — awesome. We sat down in the seats of our choice (they were a bit worn and out of date, but hey, it was a trainer) and were served some of the high-end meals from Turkish Airlines. 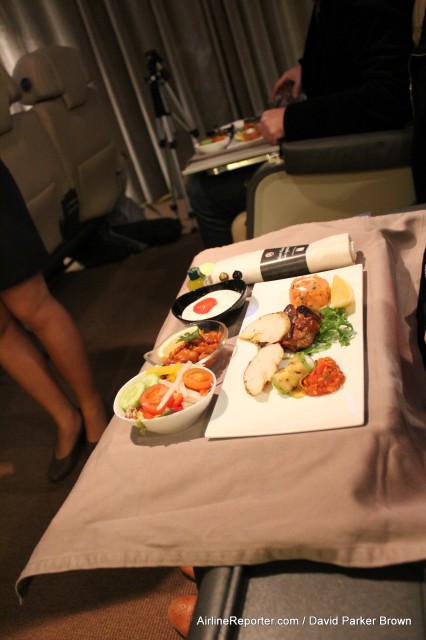 Bon appetite; airline food at ground level, but in an airplane. Wait I am confused. Not too confused that I cannot take a photo of my seat mate Will Horton‘s food.

While we dined, we also had the chance to learn a bit more about their catering operation; we would soon go on a tour.

Before getting to where the food was, we all had to put on proper attire — who doesn’t look good in a hairnet? 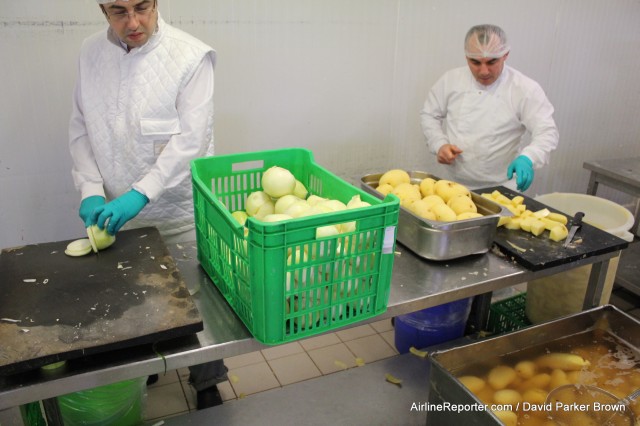 Most veggies are chopped by hand

One thing that surprised me is seeing that the majority of fruits and vegetables come into the facility whole and are peeled, cut, cubed, and processed in-house. 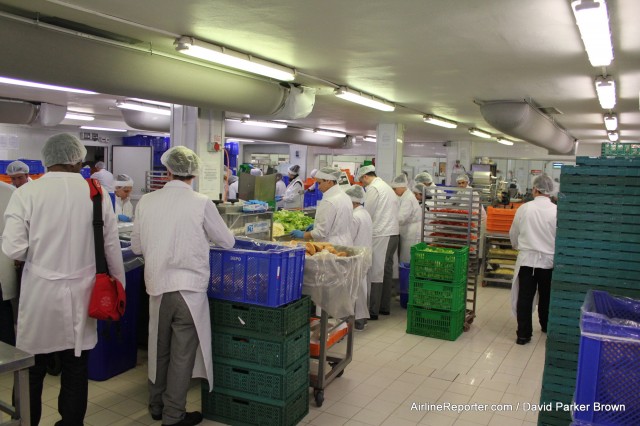 There are many people who have different tasks

Taking an overview of the facility it looks like organized chaos. People are moving in all different directions, but each has an assigned task and come together to process so many meals per day. 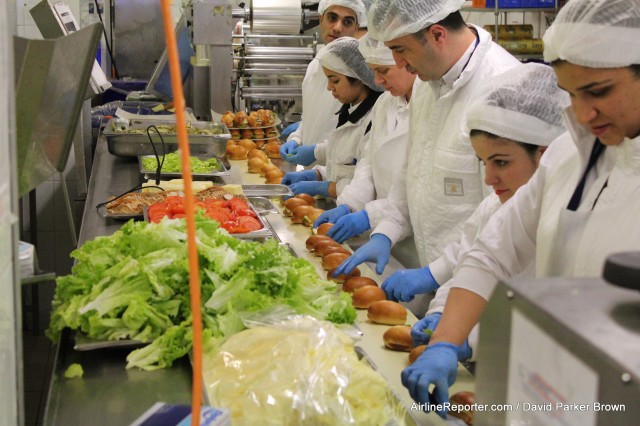 An assembly line of sandwich making

There were quite a few different assembly lines. Some were to make sandwiches, others putting boxed meals together and there were a few putting silverware together and wrapping them in the napkins. 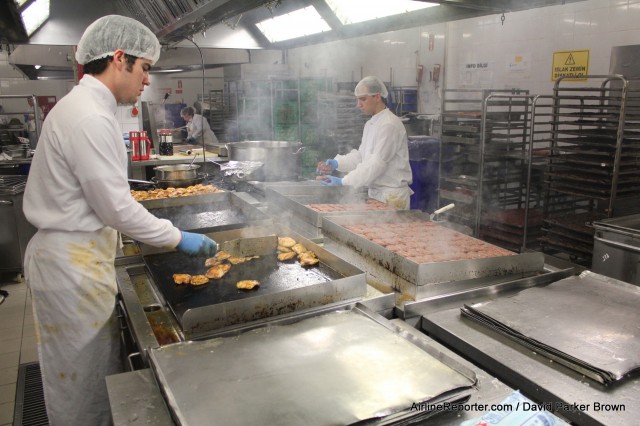 There are large grills for cooking meat

One interesting part of the tour was how much of a temperature difference that they was between rooms. Of course you have your standard refrigerator and freezer rooms, but going from the room where the food was being plated, and the room where they cooked the meat, was still about 20 degrees difference. 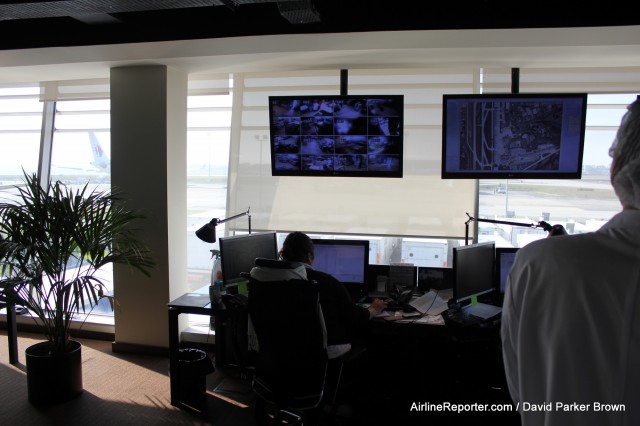 Getting the completed food to the airplanes takes additional work

To help coordinate the whole catering effort, Turkish Airlines has a control tower-like facility that makes sure the right food gets on the right trucks and on to the right planes on time.

Much like a control tower, they have some pretty slick views. 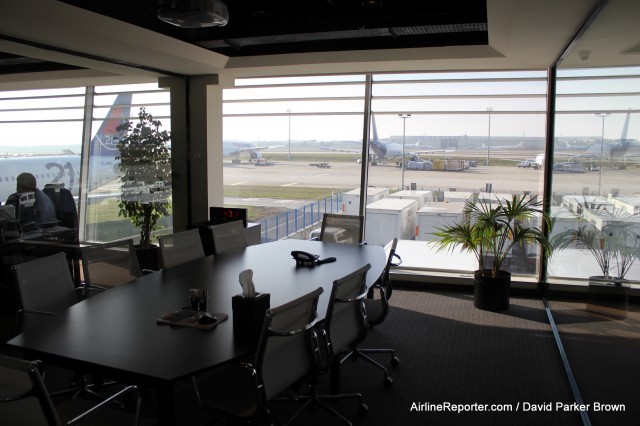 A conference room in the catering operations area

Viewing a computer screen is one way at keeping track at what is going on, but the more fun way is being able to just look out the window. 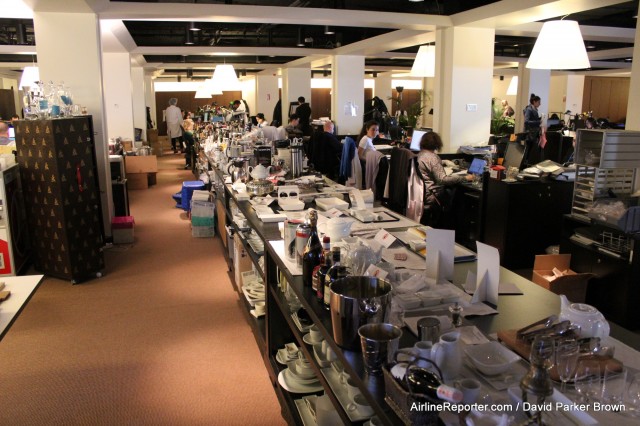 A whole bunch of stuff laid on on a long table

At the very end of our tour and back out towards the offices was this long table that looked like there might be a garage sale going on. But these are all the items that Turkish uses, or is looking to use, on their aircraft. It lets people really get a hands-on feel and look of what works and what does not.

The tour was surely impressive and I was amazed that after we were done, we headed to the lobby and had a spot of Turkish coffee before heading over the maintenance facility for a tour. I would love to share that tour, but unfortunately no cameras were allowed. Â That said, I will be sharing my tour of the flight training facility shortly.

Note: Turkish Airlines supplied my flights, and accommodations while in Istanbul.

https://www.airlinereporter.com
UPDATED: Malaysia Airlines Flight 370 Has Likely Crashed But Where?
Flying a Czech Airlines A330-300 With a Korean Air Business Class Product
5 Comments

Very good photos and story. You make me wish I was still working at Catering & Commissary at my favorite airline.

I was impressed with the story and the pictures. It looks like Turkish Airlines is a quality airline with quality food service. I will feel safe flying with them if I am in their part of the world.

I wonder which airlines still have their own flight kitchens and provide their own food services?

Thanks. You shared good information.
ve may bay gia re

Food looks good. How much thought goes into how easy it is to eat in a confined space on a plane? I love a nice piece of steak, but you do need a little elbow room to eat it…

You should have had a hairnet for your beard too!

Oh yes and thanks. I will finish reading this, examine all of the pix and savor when I have a few moments. A great post, perhaps one of the best… No matter what class we are flying, when the airtime stretches beyond 3-4 hours, we humanoids need to eat. Feeding follows ticket class to a degree, but too many carriers still don’t get it: Truly good food is usually better than horrible food well served. There is a difference, but some carriers do not seem to understand. More to follow. -C.