Traditionally, Israeli flag carrier El Al has ceded the outbound Israeli tourist market to airlines like Sun D’or and Arkia. Those airlines, however, are not very well known to passengers outside of Israel.

El Al, therefore, has decided to turn the tables. They know that as a full-service carrier, they are at a cost disadvantage to the coming threat of RyanAir, so they have decided to head them off at the pass.

Starting on March 30th of this year, Up will offer up to 50 flights per week to five destinations in Southern and Eastern Europe.

Up, unlike its European competitors, will not offer a single low-cost product. They will offer a traditional low-fare/low-cost economy cabin, but will also offer an economy “plus” product (marketed as Economy Class Plus)  befit with all the traditional economy plus benefits. On medium-haul flights such as Tel Aviv-Kiev, such a product will likely be extremely popular. Especially considering that passengers on “Up Smart” fares will be able to access the King David Lounge at Ben Gurion Airport (TLV). 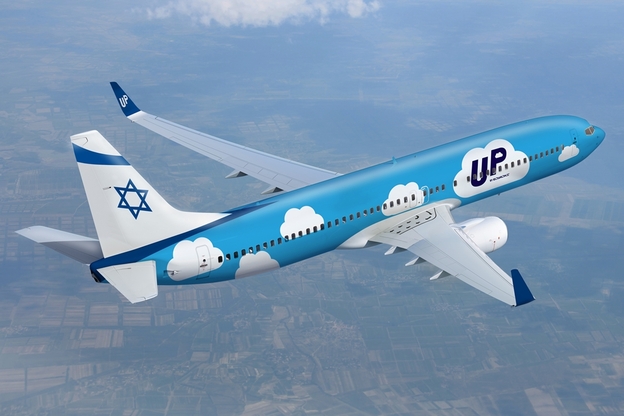 What differentiates Up, at least within Israel, is that passengers flying on Up-branded flights can still earn status miles on their El Al Matmid accounts. As such, when one has status with El Al, the status and benefits carry over to Up and all the benefit.

Unfortunately for us Seattle-area spotters, all of Up’s initial 737-800s (five in total) are being transferred from El Al. In fact, the first frame has already been painted in the Czech Republic.  Maybe one day, however, the Up livery will appear on a brand new 737 out of Renton.

If you look at the model in the first photo carefully, you’ll realize it’s not really a 737 by complete measure.

The tail (including the cone and the leading edge of the vertical ruder) looks like a 777’s.

Except for the winglet. While 777 does not have winglets, the one (only one on the right being visible) on the model does not look like one on a 737, either.

All in all, it’s not a true 737-800 model, rather a hybrid out of the author’s imagination and workmanship.

The composite image later in the story seems similar as well.

And just want to point out that the images came from El Al, not AirlineReporter :).

There are images of a real Up 737 in the wild, and we can assure you that they do not look as distorted.

… and they have inserted the tailplanes upside down so they have an anhedral instead of a dihedral… FAIL!

Does Up! use any element of El Al’s in-flight experience as it’s own?