They all thought they were being funny and setting me the impossible task, but working through deals is what I do for a living, so I figured I had a sporting chance least. They did give me the OK that some things wouldn’t count towards the $100, but that felt like cheating.  So I took it to heart – $100 all in’¦ how could I do it?

Thankfully, I had some leftover points from credit card bonuses and some random spending throughout the year (shopping portals are a great way for easy bonus points), so much so that I had a choice of programs to burn miles from. I had enough in my accounts for round trip domestic airfare; looking into my options the easiest two cities to fly to on the miles were Anchorage or Kansas City.

Fellow Airline Reporter writer JL (based in Kansas City) took it upon himself to fly the flag for his hometown and convinced me to come over for a weekend. The promise of some good BBQ was the winning factor.

With the flight times I had for using points, it would give me a straight 24 hours in town; I was sold! Oddly, this was not the first time I had flown across country for BBQ (what can I say? I am an AvGeek). 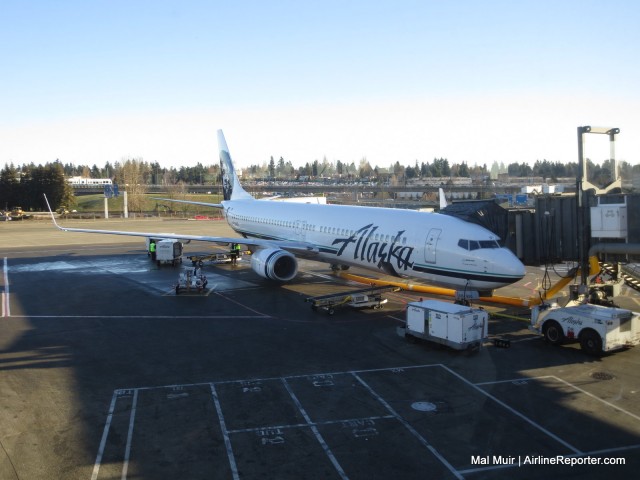 Total cost of flights on Alaska to Kansas City – $5!

The flights cost me a total cash outlay of $5 in taxes and set me back 25,000 miles (half from Alaska and half from American, though both flights would be on Alaska). That may seem like cheating, but I don’t attach a specific value to points.  Some people do, though, and they would say this is a bad way to redeem the points.

The way I looked at it was that these points were almost “orphaned”, cast aside to not see the light of day till I had enough for a bigger flight. What better way to use them up than on some random fun?

I scored even better when the IHG Rewards Club released their ’œPointsbreak’ list, offering hotel nights for only 5,000 points, I had enough for two nights at those rates, and for once a city I needed was on the list.

Crowne Plaza Kansas City – Overland Park was now booked, and as a added bonus, it is actually in Kansas whereas the Kansas City Airport is in Missouri’¦ two states for the price of one’¦ win! 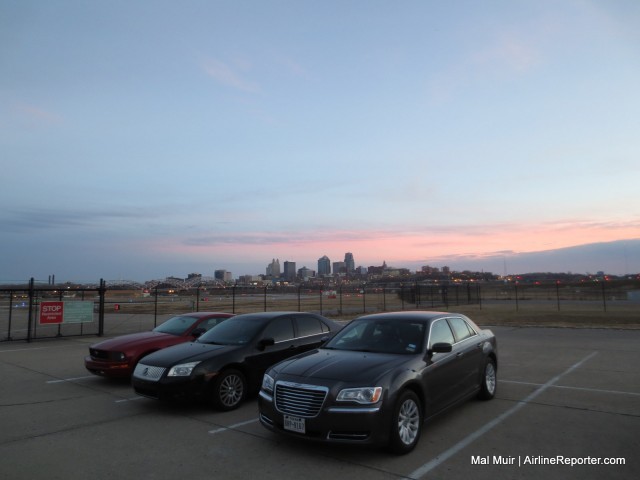 My rental car in Kansas City at sunset; a great way to end a brilliant day. Can you guess which car I chose?

I booked a rental car for the weekend using my preferred company (I could have used Priceline for even cheaper, but I much prefer using National because I get to pick my car, and with the weather that weekend, I was extremely grateful for that benefit).

The car was the most expensive part of my weekend, coming in a tad over $35. With all the planning done and having only spent $40 so far, I was starting to feel confident about the challenge. 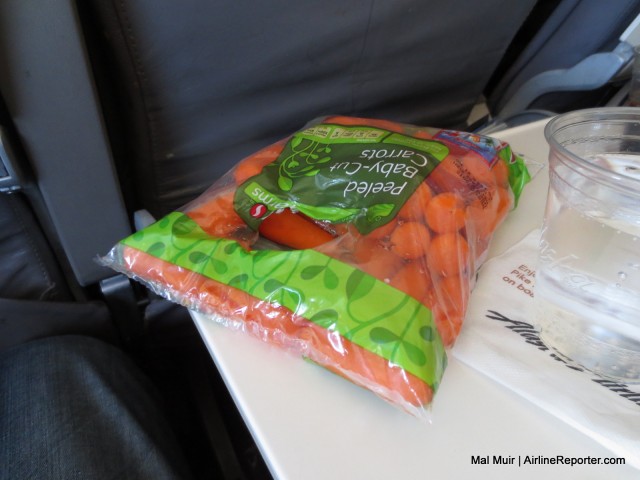 One way to save a few bucks onboard… pack a lunch!

The weekend arrived and although the weather in Seattle that day was beautiful it was hideously cold and I was heading to the midwest, where it was even colder. For someone that is not used to the cold, this was going to be interesting.

The flights on Alaska went off without a hitch and I saved some money by bringing lunch with me on the flight from home. Nothing like ’œbrown bagging’ on a flight (though if you do pack a lunch yourself, always be mindful of ’œsmells’ in the cabin and the 3 oz liquid limit).

My lunch of carrot sticks and a bagel felt awfully boring, but it was free so I can’t complain. I saved the hassle of buying bottled water for my flight by using one of the many water bottle filling stations located throughout the terminal in SeaTac. It’s the small purchases that add up. 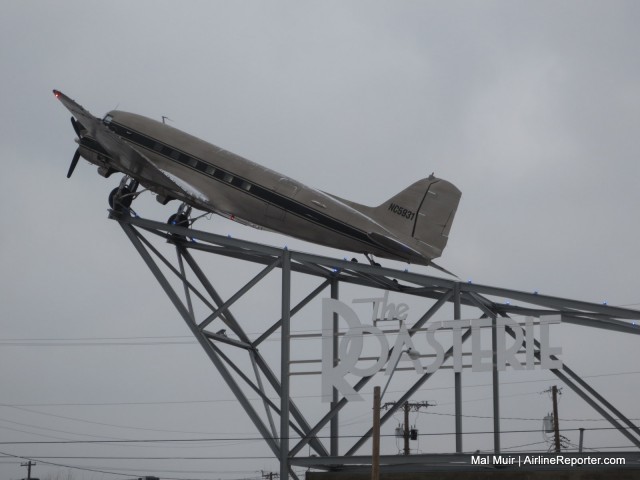 The weekend was filled with plenty of random adventures with fellow AvGeeks, and I got to meet some great people. The city itself was not what I expected (in a good way). I got to see my first Lockheed Tristar, eat some BBQ that I was warned was ’œreally spicy’ (not as hot as advertised but it was still damn good), and I even got to drive for the first time in the snow. Some might have chosen a conservative front wheel-drive car for the snow, but I decided to have some fun and very much enjoyed my high-powered, rear-wheeled Chrysler 300C.

I had fun. I was well fed. But did I make the $100 budget limit? Well let’s take a look at the figures – first up, lets look at the costs before leaving:

I counted the parking at the airport in the $100 budget, but I didn’t pay full-cost thanks to buying gift cards from Costco. What should have cost me almost $34 for two days of parking only cost me $16.83, a relative bargain. As I was only going for one night, I didn’t check any bags on the flight so that saved me as well.

Gas to fill up the rental car was another $11.53. Total so far was almost $69’¦ this was not going to be easy. Thankfully, a lot of the attractions for an AvGeek in the snow in Kansas City were free, so the only money I actually spent in the city was on food or souvenirs. My dinner was provided free thanks to JL who showed me some BBQ (having great and giving friends helps), but the other meals were on my dime. I try not to be stingy with meals, so a good chunk of cash went to food. So now, the breakdown looks like this:

All up, the weekend set me back $99.42. I didn’t go overboard trying to skimp to make it under budget and to be honest I felt like I had a brilliant time. I think I had just as much fun planning this trip than I did actually going on it. I got to use my skills that I put to work every day towards something more personal, and enjoyed the challenge immensely. The whole experience did allow me to come up with a few tips so that you to can enjoy a trip on a limited budget: 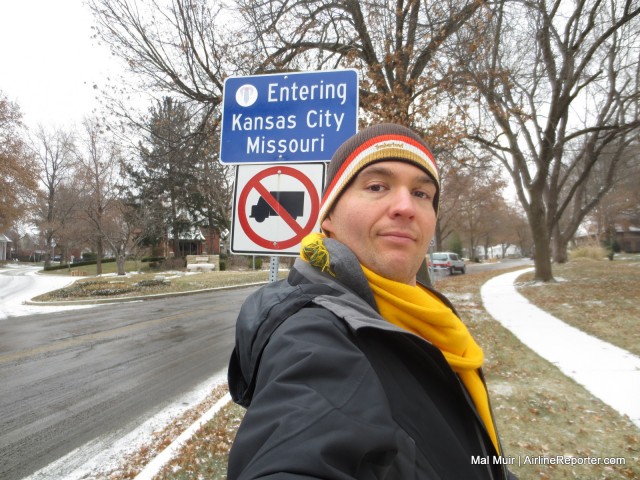 A selfie at the Kansas/Missouri state line – two more states down!

All in all, I had a blast of a weekend; being able to show to the AirlineReporter staff that no challenge should ever be ruled out was just as much fun. I enjoyed the city, the company, and as much as I hate to say it, the weather (experienced snow for the third time in my life).

Two more states down’¦ six to go’¦ where to next?

https://www.airlinereporter.com
Saying Goodbye To The DC-9 on its Final Scheduled Flight With Delta
A Soviet-Built L-1011kov? Almost — Too Bad It Never Flew
2 Comments

BUT, you didn’t go by the Airline Historical museum and see the Lockheed Constellation L-1049 Save a Connie and the Martin 404 or the TWA Dc-3 or the L-1011, shame on you,, the best part of Kansas city for aviation hounds !

I did actually. Not for long and it was late at night as one of the staff at the museum allowed us in to check things out. Of course we all went out for BBQ after.