Wrong – this is Heathrow! Having to walk half a mile from gate 24 to the transfer bus was the first nuisance. The second was the fifteen minute drive to Terminal 5. This was followed by another aimless walk to the connections desk and finally, Fast Track security. It is “Fast Track” in name only – I was stuck behind at least three passengers who forgot the 3-1-1 rule. Noticing that we were at gate B42, I realized that I  would have no time to visit the Concorde Room (British Airways’ first class lounge), which I was really looking forward to.

Boarding was also a little odd. Instead of BA staff looking at IDs, security was inspecting everyone’s travel documents to confirm the ability to enter the United States. Evidently, he was either very suspicious or just slow. I shall stop dwelling on my sub-par airport experience and talk about the aircraft experience, as it was infinitely better. 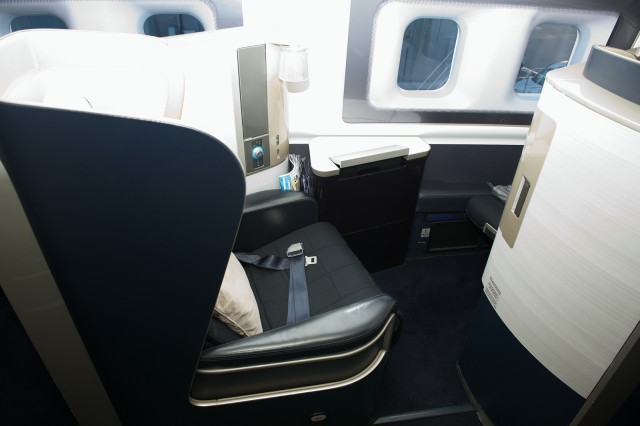 The BA Prime First (F) cabin takes its inspiration from private clubs and business jets. It exudes a modern, classy atmosphere, which I much prefer to the “living room” or “restaurant” themes other airlines have moved towards. I do not need to watch the other passengers eat dinner; to me, first class is a solitary (or binary) experience.

While BA thinks the whole mini-suite “doored” concept is a step too far, I am legitimately torn on that issue. 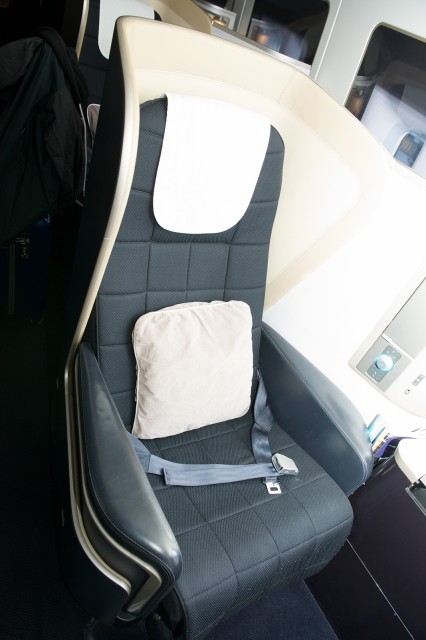 The upholstery on this seat is one of my favorite parts. Photo by Bernie Leighton | AirlineReporter

The seat itself, of course, offers full flat capability, and comes with a turn-down service.

One of the best features of the First Class cabin aboard BA is the window shades; they are designed to remind passengers of business jet fittings. They even glow blue. 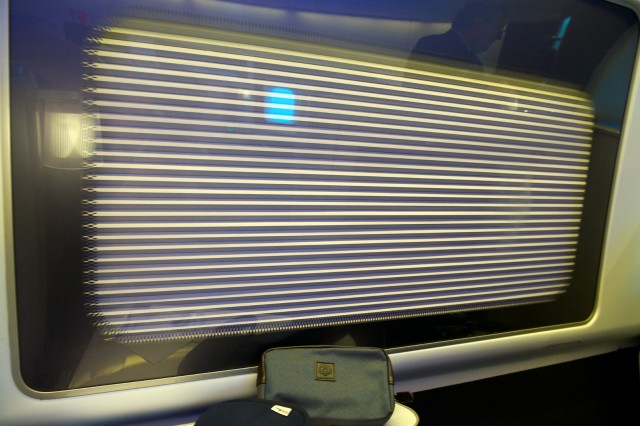 The business-jet like window shades on a British Airways 747 – Photo: Bernie Leighton | AirlineReporter

Finally, it was time to turn my attention to the pajamas and other amenities. They were situated on the footrest which – if you desire to squash your partner – can double as an additional seat for meal service. In BA’s defense, however, no airline does jump-seat dining comfortably. I understand the allure of offering it, but having tried it many times now, it is a novelty that always leaves one passenger suffering. 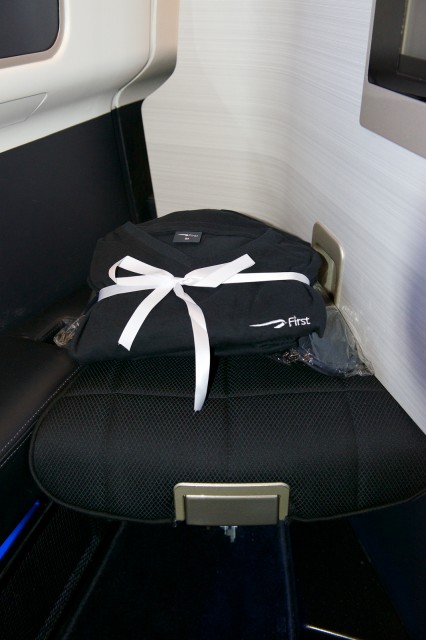 Prior to takeoff, as drinks were served, I was informed that loads were very light in F that day and that I was free to move about the cabin. Not wanting to abandon or move all my things, I decided to move to seat 1K for takeoff.

It was a very, very, good choice. 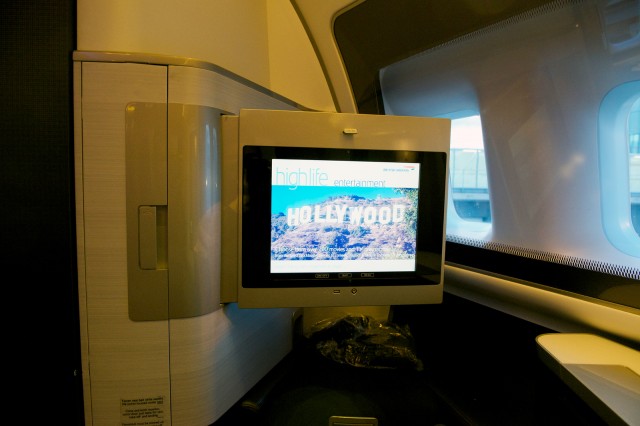 The view from seat 1K – ahead of the pilots – Photo: Bernie Leighton | AirlineReporter

From this seat, I was able to feel every turn of the nose wheel and every tap on the brakes. I was also airborne before anyone else on the aircraft! If that was not cool enough, I could hear the wheel spinning as it retracted into the landing-gear bay immediately below me.

Everyone needs to sit in the nose of something at least once, and I had finally done it. It is a shame that safety regulations prohibit passengers from sitting ahead of the exits on newer aircraft, in what Boeing calls “Zone A”.

Even though the flight was only to Chicago, the flight time was scheduled to be eight hours and ten minutes. Despite all that time, I felt as if I had just run a small race. I was starving. I politely asked for my dinner to be served as soon as possible.

Up first was the quail. 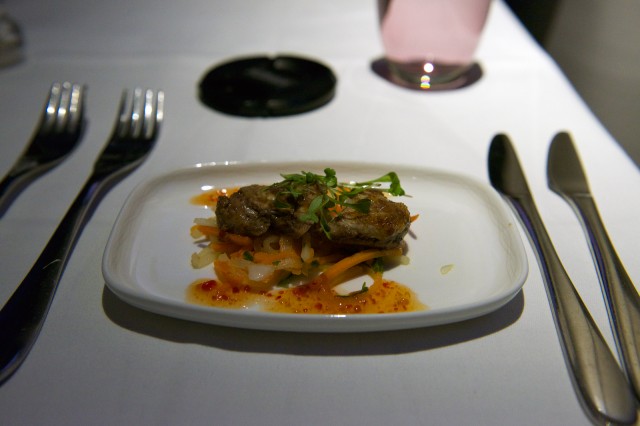 I’m not partial to quail, even on land. That said, I can appreciate the skilled execution and seasoning that went into making a dish with such a strong flavor while at 38,000 feet. 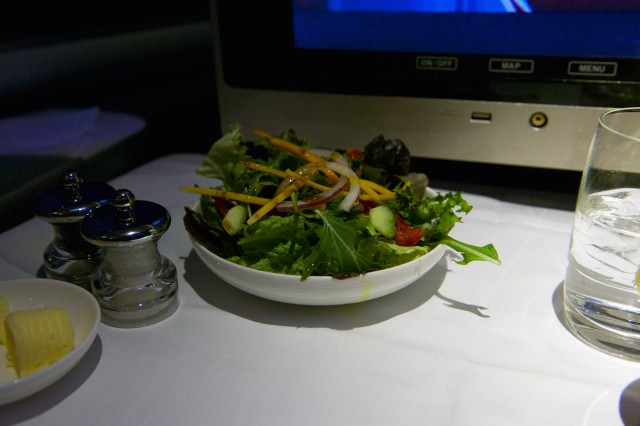 Next was a salad of English vegetables and sundried tomatoes. The dressing was light and tangy. Definitely ahead of the stodgy wilted lettuce some North American airlines offer. Still, it was a salad – so I am surprised I even had that much to say. 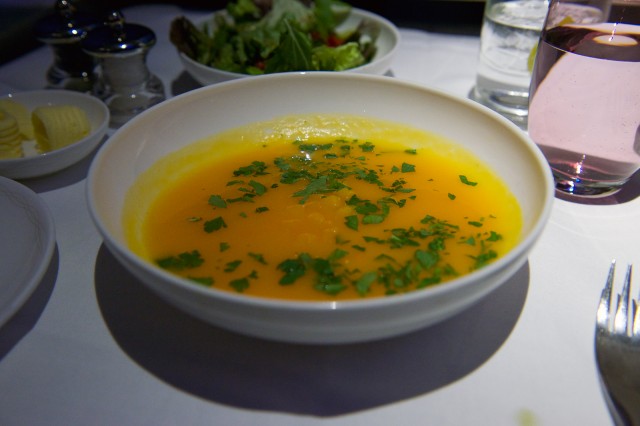 BA, in general, always has delicious soup in first class.  This was no exception.

It was around here when I realized that BA’s first class menu is focused on “classics”. They do not want to push the envelope as their target passenger does not want that. They want to do the classics and do them flawlessly. Philosophically, I am okay with this and I enjoyed my meal. 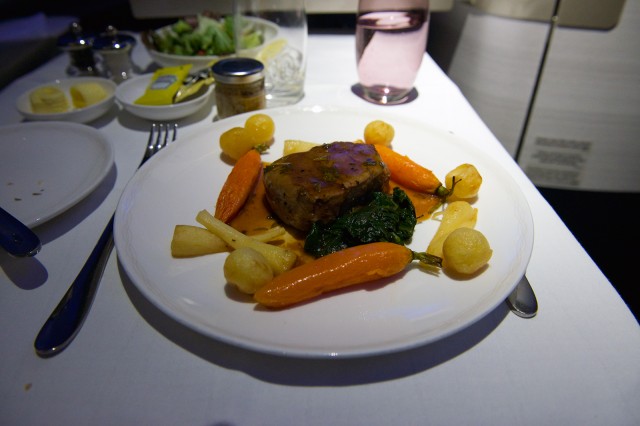 I ordered the filet. Not sure why the pressurization makes the texture of the meat springy, but it always does. That said, this in-flight steak was bursting with flavor. I am always impressed when an airline is able to perform a flawless, formal dining service at cruise. Even with the cabin’s one busy flight attendant, nothing was delayed, improperly set, or left unfilled.

I did not opt for dessert as everything seemed to be “fruit covered in other fruit”- which I do not equate as dessert. Instead, I went straight to the tea and chocolates.

British Airways uses bespoke chocolate boxes from Highland Chocolatiers. In most circumstances, you can take one or two from the box. 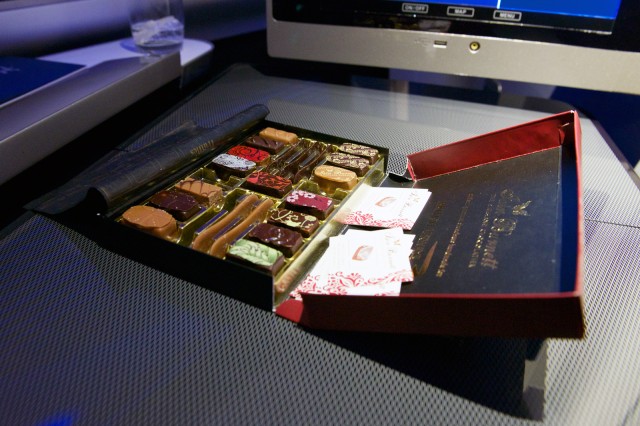 This was not a full flight, however, and the box ended up on my table. Magic! I am a man of zero restraint, so you can assume this did not last long.

Even though I knew it would ruin me in terms of jet-lag, I had not been sleeping well the past week. I opted for the turn-down service and decided to get some sleep. 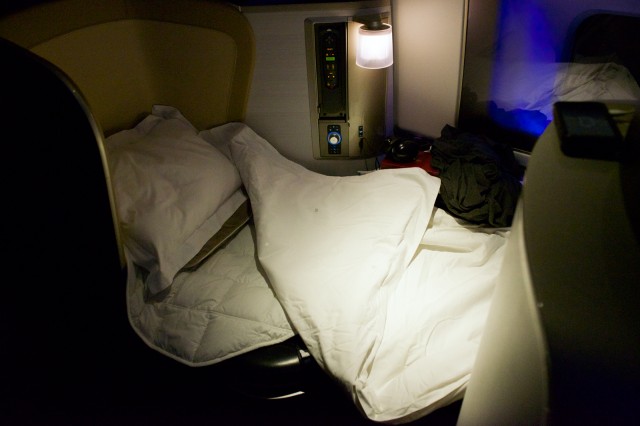 Fabulously comfortable. I dare say, probably the most comfortable bed I have yet slept on in a premium cabin. 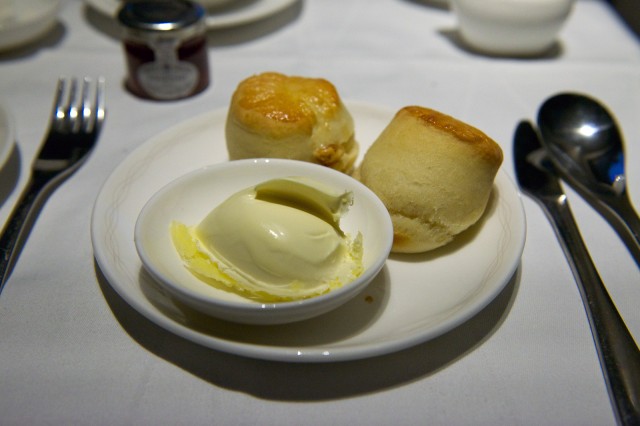 What else but a course of classic British Airways scones with cream! They were very good, and gone very quickly.

Served with the scones were a collection of petit-fours. 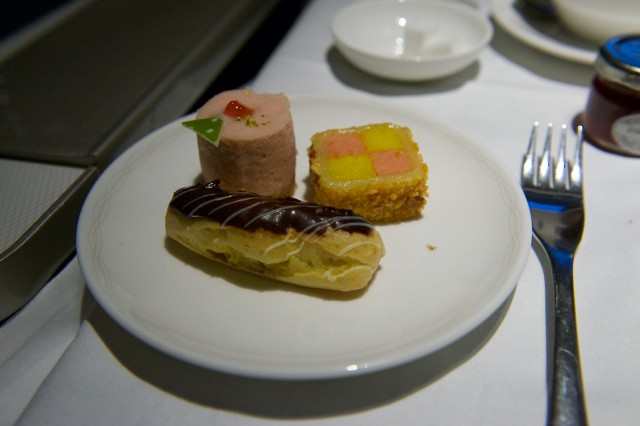 The eclair was the best, but the cakes were also good.

After the second service completed, it was time to land at O’Hare.

It was a nice change to enjoy what is often tacitly marketed as “England on a Plane”. I look forward to flying with British Airways again.

You need not to be biased. Based on experienced it is the WORLD’S FAVOURITE AIRLINE. It is, was and will always be my first choice of travel. BTW I am not from Britain 🙂

Aside from your interesting article, two points I would debate:

The biggest difference between the two cabins,other than the triviality of the overhead bins, is the BA 777 First cabin is considerably more spacious than the BA 747 First cabin. In essence the cabin in the 777 is behind the cockpit and then very spacious galley so by the point where the cabin seating starts, the fuselage is at full width, opposed to the 747 which is all the way into the nose. I travel BA First long haul regularly and consistently try to choose to fly in a 777 if there is an option, of course, this may not be to everybody’s taste.

I also do not agree with your Heathrow observations, which in consider to be sloppy. Heathrow did used to be bad, but has dramatically improved, I recently had to transfer between terminals and had a very smooth and quick experience…..why on earth did you choose to take a bus?

Perhaps for comparative purposes you should consider transfers and time to/from gates at : MIA, EWR, ORD, AMS, CDG, LAX, JFK, MAD, BCN – the list in my personal experience of several decades of travel, is endless.

And as for an unusual Security / Boarding process, show me any US airport, with any TCA agent. Staffed by people who are not even qualified to tie their own shoelaces, I’ll take British security, German security, Dutch security any day over the abject infantile ridiculousness demonstrated in the US, but in fairness they do have to cater for the lowest common denominator from their domestic client base….

Just out of curiosity.. I would love to know what you do for a living if you fly first regularly??
Im still a teen trying to work out a career that involves lots of flying paid by the company!

Even if we disagree on Boeing preferences, I am glad to see you enjoyed my article. I am, however, confused about your statement regarding the bus. When going between piers in terminal five (outbound) one can take the underground tram system. Unfortunately, going outbound, one can only take the T bus. This is also the only way one can get between terminals three and five. Unless there is a secret way that, by its very nature, eludes me.

I dare say- I transit LAX terminals all the time. My usual route is SEA-LAX-SYD. I’ve also done MIA. MIA, we know MIA is a sorry state of affairs. LAX may need improvement and it can be extremely annoying, but going from TBIT to T6 has never taken me (gate to gate) longer than one hour.

Wondering if you have experience in first class of other European airlines (e.g. KLM, Air France, Lufthansa) and how this compares? Sounds like a ringing endorsement of BA!

I travelled yesterday with BA First Class on a 777 BOM to LHR
I was not very impressed – there seems to be very little difference in quality of service between ‘First’ and ‘Club’ with the huge price jump.
It was the new cabin – but I found it shabby, sticky and not very welcoming. I didn’t rest a wink as some passengers insisted in keeping their window blinds open throughout the whole flight – wondering down to Club World ALL the shutters were closed and there was a relaxed comfortable atmosphere. In First it was too cold then too hot and then too cold again!
Due the the “eat when you want” service in First, the entire flight smelt like a kitchen, which again wasn’t appealing.
In future I would always opt for Club World – the service is great and the price reasonable
Lowest price ticket LHR to BOM is 1500 in Club was 1500 gbp in First 3000

Do you think if I asked for a pair of pyjamas while probably not staying first class they will allow it?