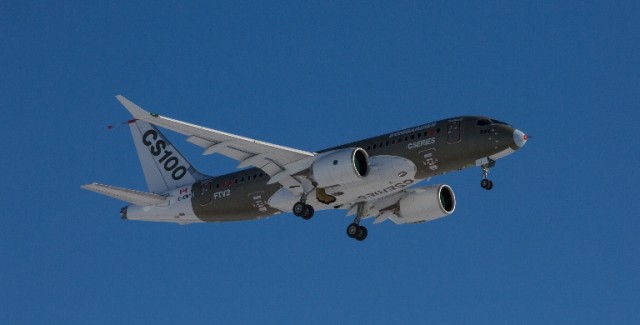 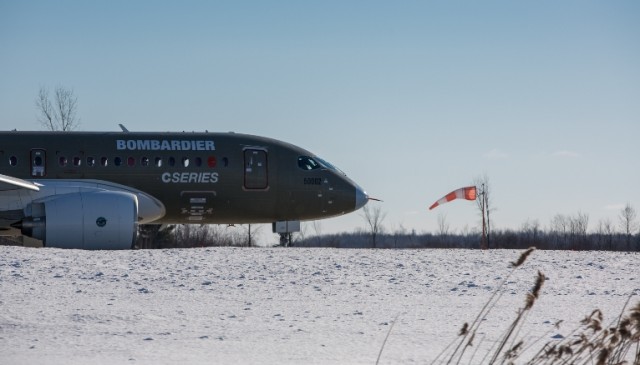 The 110-to-130-seat CS100 will be the first to enter service, followed about six months later by the larger CS300, which will seat between 130 and 160 passengers. The CSeries has been designed to fill what Bombardier sees as a â€œsweet spotâ€ in capability between the Embraer E-Jets and the single-aisle Airbus A320 series and Boeingâ€™s 737s. Its advanced features and new-tech Pratt & Whitney PW1524G PurePower geared turbofans are expected to give operators significant operating savings over current planes. The CSeries will have five-across seating in economy, in a 3-2 layout, with 18Â½â€ and 19â€ wide seats. Seat width has become a hot topic of late, and the CSeries might just have the best economy class of any single-aisle aircraft. Iâ€™ve visited the cabin mockup, and I found the CSeries cabin well-designed and comfortable.

CSeries CS100 Flight Test Vehicle 1 (FTV1) had its first flight at Montrealâ€™s Mirabel Airport (YMX) just over four months ago, on September 16th, 2013. Since then, FTV1 & FTV2 have flown a total of 52 hours, a small percentage of the planned 2,400-hour flight test program. FTV3 was just turned over to Bombardierâ€™s Flight Test Division last week, and should join its sisters in the air soon. CS100 FTV4 & 5 will follow, along with two CS300 flight test aircraft. And in addition to work required for the flight test program, Bombardier is building a new CSeries factory at Mirabel. 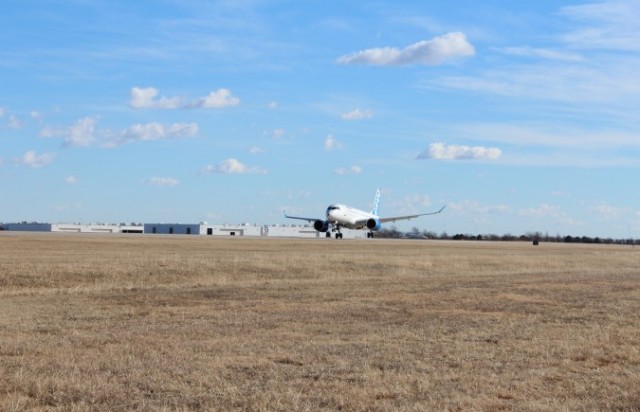 While industry watchers may have expected yesterday’s announcement, itâ€™s likely that Bombardierâ€™s airline customers werenâ€™t particularly happy about it. Fleet planning is an art, and delivery delays can play havoc with an airlineâ€™s development plans. This delay may also have an impact on new orders from potential customers, such as Air Canada. But depending on an airlineâ€™s requirements, the revised EIS might be a positive change and fit better with fleet planning. 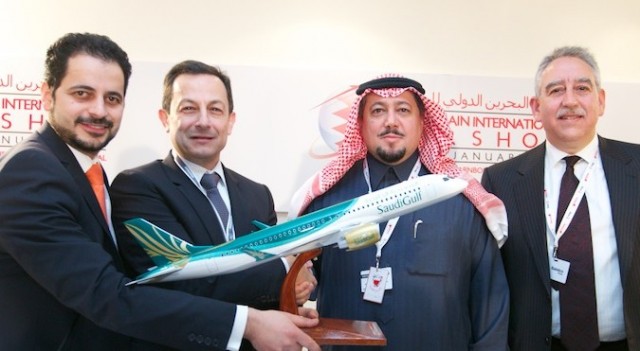 Along with the change to the EIS, Bombardier announced an addition to the CSeries order book with a firm order from Al Qahtani Aviation CompanyÂ for 16 CS300s, and options for 10 more CS300s. The aircraft will be operated by SaudiGulf Airlines, a newly launched national carrier for the Kingdom of Saudia Arabia. SaudiGulf Airlines is the third CSeries customer in the Middle East. And Swedenâ€™s MalmÃ¶ Aviation was confirmed as the first airline operator of the CSeries.

The CSeries has 198 firm orders from 17 customers, plus 247 options for a total of 445 aircraft. Bombardier has set a â€œ300 firm orders by EISâ€ target, which now looks more achievable with this change in schedule. Now all that has to happen is for the CSeries to meet its performance and manufacturing targets. Itâ€™s still a daunting objective, but Bombardier has now given themselves some breathing room.

http://www.wingborn.aero
Flight Review of British Airways’ 747 First Class
What is Delta Air Lines Up To? The Good, Bad & Ugly