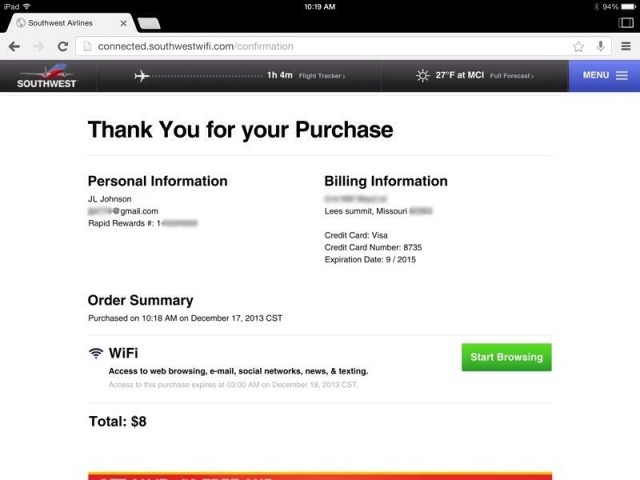 I have long been a frequent Southwest passenger and have had the opportunity to watch as they improve Row 44’s offering, and continue to roll it out across their fleet. What began as simple, and sometimes buggy, in-flight connectivity (IFC) on just a fraction of planes, has now morphed into something much more advanced: Diverse and capable BYOD in-flight entertainment, IFE. 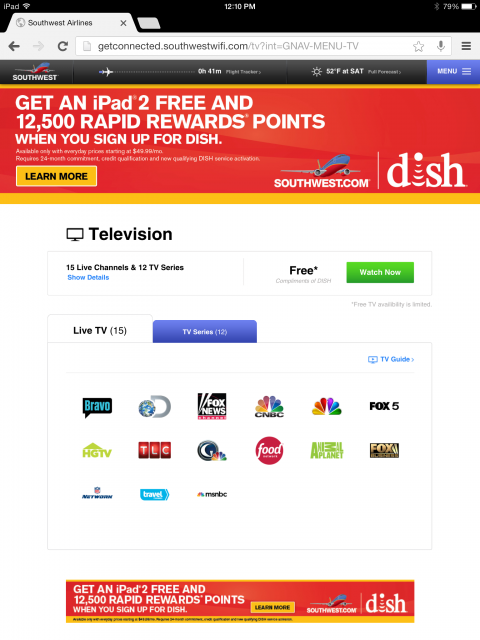 According to Rob Hahn, Southwest customer advocacy team leader and one of many @SouthwestAir twitter co-hosts: “Approximately 77% of the Southwest’s fleet is equipped with Row 44.” Southwest offers a number of IFC and IFE options, some of which are even free. At the time of my review, 12/17/2013,  they were as follows:

I opted for the $8 WiFi connection.

I forgot to test the throughput of my connection but can say Southwest’s Row 44 offered a solid browsing speed even with a number of my fellow passengers partaking in the free TV. Bandwidth-intensive activities such as VoIP, Netflix and Hulu are banned for the reason of the common experience, but I suspect this is more to allow the better control over usage, and likely revenue, should they choose to begin charging for TV. 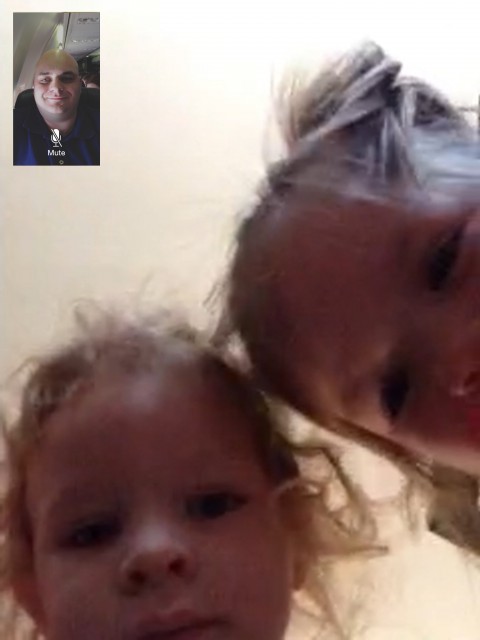 While the common VoIP services were not able to connect (I tried!), I was surprised to see that I was able to get a very quick, muted, FaceTime call back home to my kiddo and his pal. This was for experimentation only, no conversation–I wouldn’t condone that–just wanted to see if it would work, and it did, with fair video quality. 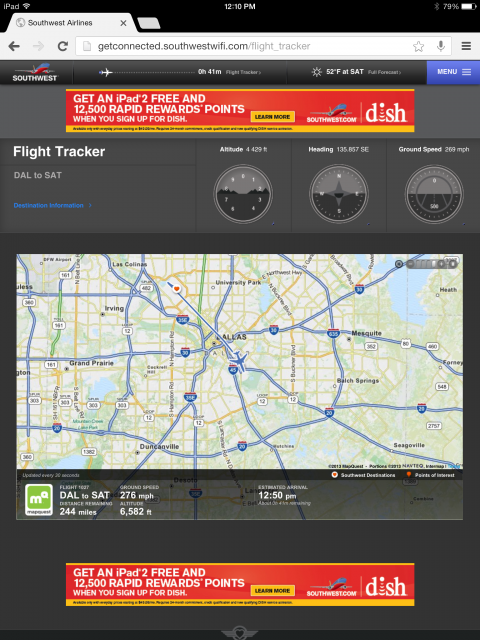 The flight tracker, which is free for all and displays as an inserted browser bar menu, is well-designed and displays all of the info one would expect: Time to arrival, altitude, heading, ground speed, and a map. Notice the screen-shot above was taken at 4,429 feet, well below 10,000. It feels weird to have electronic devices on below 10,000 feet, but it also quite nice. 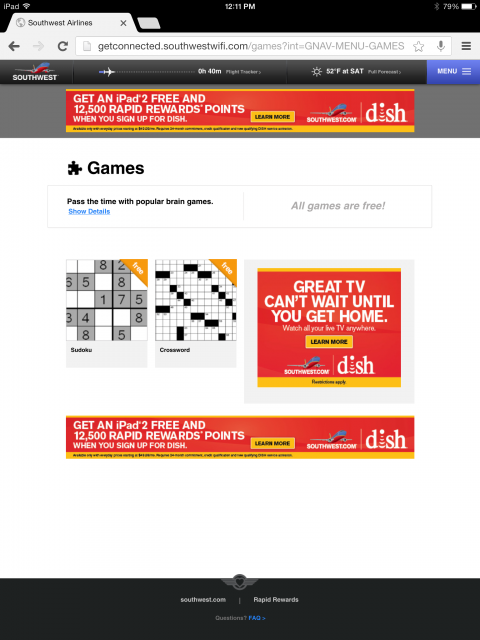 The IFC/IFE wars seem long and undying. There are many folks in the aviation community that strongly support airline-provided hardware. And while resistance to BYOD is just now starting to ease, the folks at Southwest Airlines and Row 44 have long been pioneering the BYOD experience.  With gate-to-gate entertainment and connectivity offered by no one else in the US, and perhaps the world, Southwest again stands apart from the herd.

I flew CMH-LAS-RNO on a Sunday and was able to get the NFL Redzone channel for like 6 bucks… It was awesome.

When extending to ‘read the rest of this article,’ I got some pop-up thanking me for my $8 purchase. I do not know what this is, but you can bet your life that I did not authorize any payments. A bump, I’m sure, but please be aware that you site may be at risk. I’ve never seen this one before and yes, my systems are well protected. In no case will I spend $8 to read the second half of a post on this site. We already know that. Just a head-up. I do not know the origin of the popper, but I am surprised that it got through. seeing it twice is more than a bit strange and of course I’ll be watching my accounts with extreme care. Best wishes to all,

LOL! You do realize No Fly Zone that the “$8 purchase” was just a photo of the author’s iPad screen on board the Southwest flight he wrote this article about right?

Wow, apparently you didn’t take time to read the actual “popup” because you would have seen it was a screen-grab with some of the author’s info meant to show an example. Lmao.

Do you know how they run the games? Is it through the browser (flash, Java)?

Hi, TL. Everything is via browser. Unsure of underlying tech but it isn’t flash as I did my review on an iPad and we all know Apple hates flash on mobile devices. I suspect JavaScript or a derivative of it, maybe EXT_JS. Thanks for reading, take care.

Thanks man, much appreciated!

Sorry to bother you again. I need some clarifications and was wondering if you could help me.

What is the difference between a supplier of an IFE system (e.g. Thales Panasonic or Lufthansa) and a content provider (spa fax, bluebox)? Would a system supplier be able to upload the content to the embedded computer also without a content supplier? Further, the main difference between a company like Gogo and Spa fax is the fact that gogo would not need to upload anything since it’s is done all through wireless right? If that is the case, who would be in charge of getting the public performance licensing? Would it be the airlines or would it be included in the contract?

Lastly, I heard that there was a Hollywood ban on recent movies for wireless IFE streaming. Do you know how recent in terms of days?

Sorry for the novel, thank you for your help. Much appreciated!

Worst wifi connection you could ever link up to!!!
I spend more time loading my Netflix then being about to watch it!!!
YouTube video don’t load!!!
Definitely NOT worth the 8$!!!

Used the wifi on a Oakland to Norfolk filght. The wifi was very slow to point of unusable. Bring a Kindle and read a book next time.

That is a pretty common experience with almost any system/airline. I have flown many combos and sometimes the same system works and other times it doesn’t. So, I go into a WiFi flight not expecting it to work well and if it does — a nice bonus!

It is nice experience to watch your favoutie bengali channel in airline.

Shame on me X4:
I’ve used this service about four times, and 90% of the time it was so slow it was not really usable. On this flight, I tried all flight to run a speed test and wasn’t able to. I suspect there is no throttling, and someone is always trying to run video and there is insufficient throttling. I’m also not sure what the refund policy is, but every time I think to bother, it seems like more work than it’s worth.

I know I have no one to blame but myself, but if I can keep a few folks from wasting money, I’m happy to share my bad experiences. I guess I’m hoping one of these days it will start working reasonably well.

At this point, 2 years running, I have to classify it as a SCAM, even though I like SouthWest as an airline. Definitely use at your own risk. Good luck!