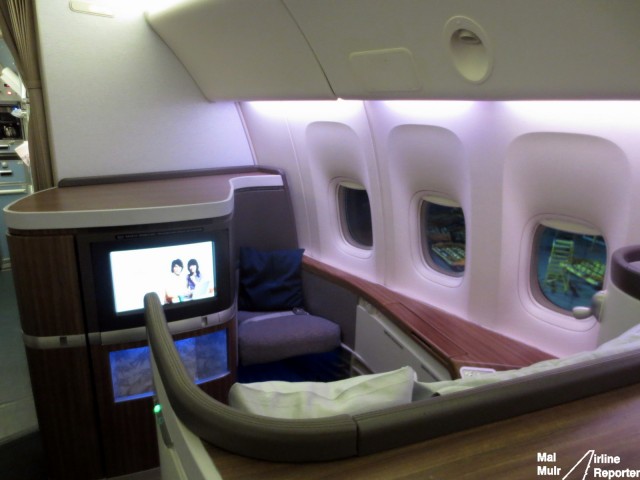 Earlier in the year I flew Cathay Pacific First Class from New York to Vancouver.  One of the (many) little perks of flying in First Class with Cathay was a lovely pair of pajamas.  Waiting on my seat for me was a pair designed by leading Hong Kong fashion house Shanghai Tang.

I had been waiting for years to get my hands on a pair of these and was totally over the moon to have them.  I was also sad knowing that Cathay was going to change over to a new provider.  I commented in my review that I was disappointed in the change, so the new provider decided to send me a pair of their pajamas to show that all was not lost.
Let’s first  look at the old pajamas, before we talk about the new. 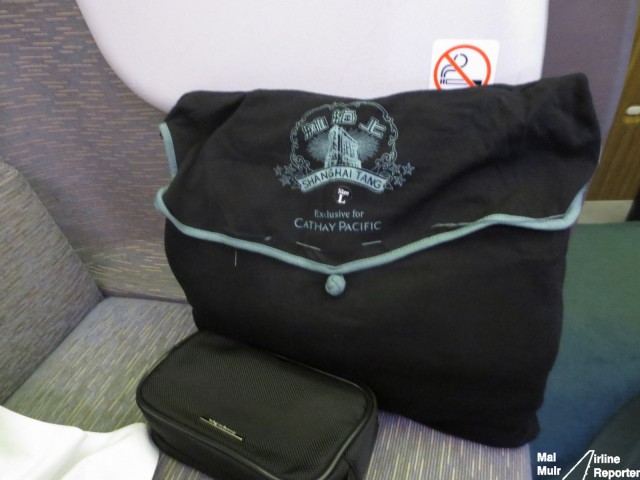 A pair of Shanghai Tang pajamas that were awaiting me on my Cathay First Class flight – Photo: Mal Muir | AirlineReporter.com

Shanghai Tang started back in 1994 by David Tang, a Hong Kong businessman looking at rejuvenating Chinese fashion by bringing back the styles of the 1920s and 30s.  The company has expanded immensely from its Hong Kong beginnings, now with 44 stores in all corners of the globe.

I have been a fan of their shirts for a number of years after picking one up cheaply while on my first trip to Hong Kong.  Since then, I have wanted to try them out.  While in Hong Kong earlier this year, I even tried to see if they sold them in one of the Kowloon stores and was sorely disappointed to find out they were made exclusively for Cathay.

They are 100% cotton and come in a variety of colors.  Though they feel a little bit heavy, they are extremely comfortable and very durable.  The style is authentic to the region; the Chinese-style buttons and the neckline point to the designer’s goals.

They come with a pair of slippers and an eye mask. I have to say that the slippers were the weakest part of the set since they were a bit flimsy.  Overall, they are a great set of pajamas and I enjoyed them so much, I still wear them at home today. 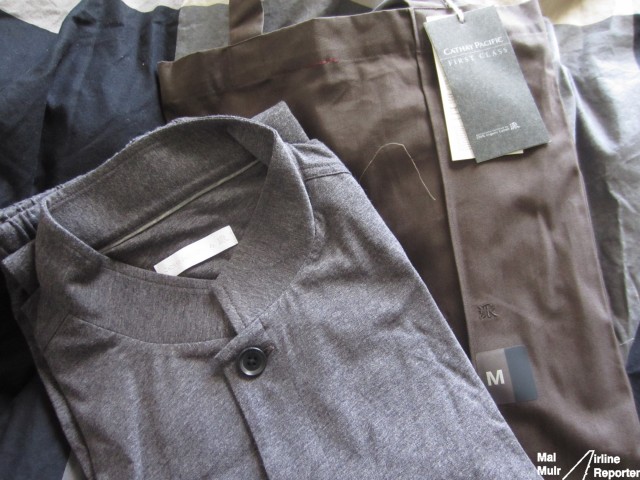 On July 27th, Cathay Pacific started the transition from Shanghai Tang to their new pajama designer.  PYE, also a fashion house from Hong Kong, started back in 1984 but their predominant business has always been tailored dress shirts.

Known for their use of a specific type of Chinese cotton (Extra Long Staple cotton from the Xinjiang region), this was their first delve into the world of airline amenities and became known as the ’œPye in the Sky’ project.  I was sent a pair of the pajamas for review along with some information from Pye about the new ’œSleep Suit’ (as they call it).  Their description:

PYE approached the design of the sleep suit with the goal of creating a garment that would enrich the flying experience through its unparalleled style, comfort, and quality. The sleep top features a double-sided collar based on the Zhongshan Zhuang, the mandarin collar suit popularized by Sun Yat-Sen. The sleep top can be worn either up in the Chinese mandarin collar fashion, or down in a classic Western pyjama style ’“ an east-meets-west twist.

Made in a 100% organic cotton, the sleep suit comes in a range of contemporary combinations in both solid colours and heathers that change with the season, forming parts of a collectible set comprised of six variations a year. Contrasting trims along the inner collar, the cuffs, and the pant pockets add a refined touch to the garment, and a single button sewn with a bright red thread is the subtle signature for this special co-branded garment.

I was skeptical when I received the offer for these – how could anything replace the Shanghai Tangs?  I was wrong, so very wrong —  The description does not do the pajamas justice at all.

The fabric is light yet durable, soft and strong at the same time.  They do not feel like any other pajamas that I’ve worn. From that first night’s sleep (in my own bed mind you), I was in love.

The color was subtle and the detail was remarkable, even down to the Cathay Pacific logos around the rim of the top button.  The pajamas came with a pair of slippers and eye mask (as you would expect). I was shocked at how comfortable the slipper were (so much so, I’m wearing them right now as I write this).

To top it all off, most airline pajamas come with a bag that screams ’œairline amenity’, meant to look pretty at first opening but not really be all that useful after that.  Pye fixed that issue as the carry bag could be used after the fact to continue holding your PJs or could be used as a real bag, it is that versatile. 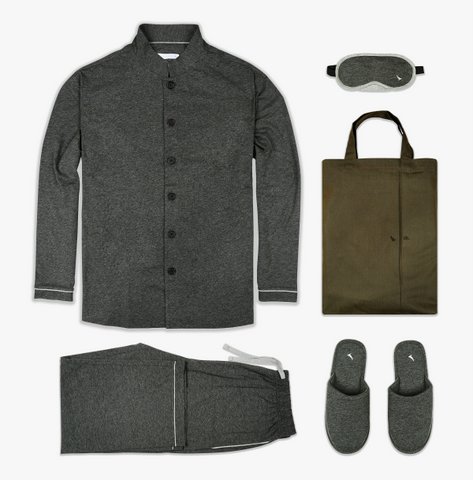 At the time of posting, Cathay Pacific has fully rolled out the new offerings by PYE.  These were the best first class pajamas I have ever worn, so even though my Shanghai Tang PJs will hold a special place for me, I can say that Cathay First Class fliers in the future are in good hands.

For those of you who have tried airline pajamas; which have been your most and least favorite?

https://www.airlinereporter.com
Airline Livery of the Week: Air Astana
Flight of the Connie: The Incredible Story of the Star of America