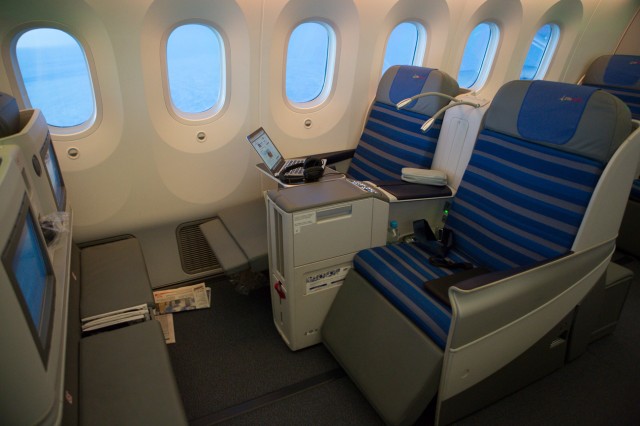 This is part two of the journey on LOT Polish’s new Boeing 787 Dreamliners. Part one, in premium economy, is available here.

After four days well spent touring Poland it was time to come home. While our initial trip was in LOTâ€™s new premium economy, dubbed Premium Club, our return would be in Elite Club, or business class. Having started the trek back to New York from the southern Polish city of Krakow, we arrived to the domestic wing of Warsawâ€™s Chopin Airport and headed for the lounge.

LOTâ€™s premium lounge is centrally located after security, above the main floor, but before passport control. The wooden decor mixed with lots of greenery made for a pleasing, comfortable aesthetic. Seating areas, split into smaller sections, boasted cozy chairs and coat racks. A selection of hot and cold food along with a generous selection of drinks could be found at several locations. The space was generally well stocked and clean. Unfortunately it was extremely crowded during our visit, and thus our stay was quite short.

Back in the terminal we made our way through passport control and to a second post-passport-control lounge. It was not a LOT lounge, but rather a private non-airline lounge that served any premium passengers at the airport. While not quite as nice or as well apportioned as LOTâ€™s, it was arguably larger and (most importantly) far less crowded. 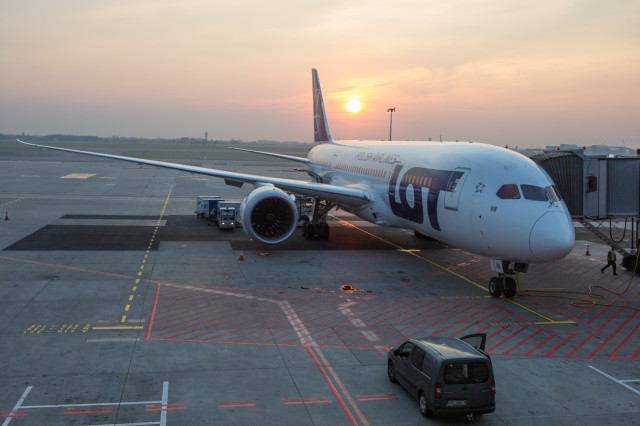 Boarding followed a thirty minute delay, and Elite Club passengers utilized a separate gateway to the forward-most door. Being one of the last to board we were surprised to see the business class cabin virtually empty, with well under half the cabin filled. Bags easily found a home in the overhead bins, though it would not have been an issue if the cabin were full either. Not long after taking our seat in 2F friendly flight attendants came by offering us a selection of preflight drinks and newspapers. Following a smooth departure our aircraft climbed steadily over Warsaw and headed west towards the Atlantic coast. 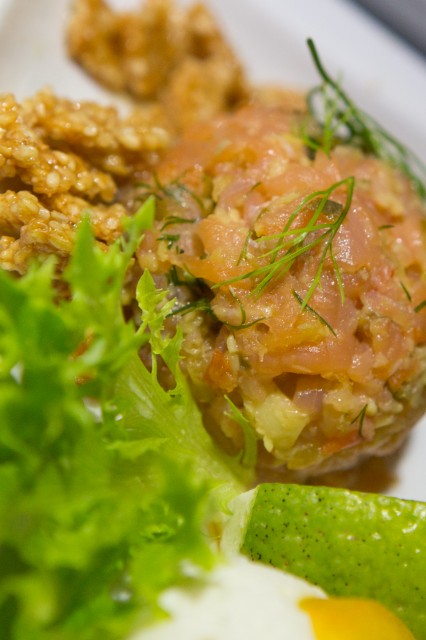 Dinner service began not long after takeoff, starting with a bowl of mixed nuts and raisins along with drinks. An appetizer followed, consisting of salmon tartare with a beef borscht jelly, goat cheese, and a crunchy salad. A main course of Polish-style chicken with noodles and vegetables came next, completed by a desert of vanilla cream with raspberry jam and a hot chocolate. The chicken was moist and tender, and the accompanying apples were a nice touch. The desert was also quite good, and the hot chocolate a welcome surprise. Related, the cutlery, glassware, and linens were of high quality.

Following dinner it was time to have a look around our seat space. Elite Club on the LOT Dreamliner consists of 18 seats in a 2-2-2 configuration. Each is 23 inches wide with 78 inches of pitch. A control panel in the middle console provides a wide latitude of seat control options, the most important of which being full-flat mode. A table and work space pulls out of a side compartment, giving ample room to work and eat, though not so much that we could do both at the same time. Storage space is above average for a premium product, with three locations throughout the seat. Finally, a USB and standard power socket were available to charge devices, though our power socket did not work (others did).

It was probably just as well that the socket wasnâ€™t working, thus rendering my laptop useless, as it was time to catch a nap. Originally intending to only take an hour-long nap and then watch a movie or two to finish out the nearly nine hour flight, we instead awoke five hours later to the start of the supper service. The seat, combined with the pillow and blanket, proved to be quite comfortable. 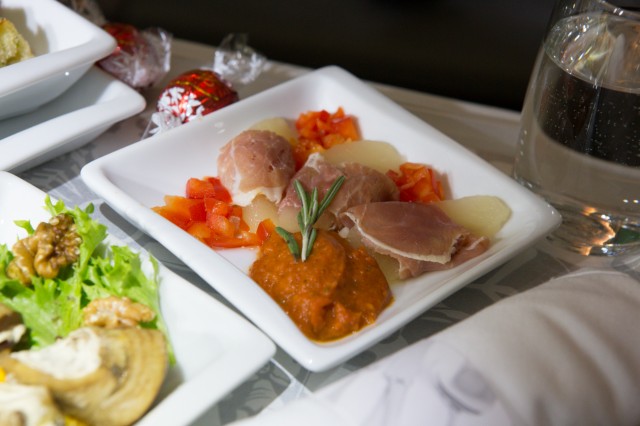 Supper was, when compared to dinner, short and simple. Pears wrapped in Parma ham with grilled vegetables in a pumpkin mouse were paired with vegetable balls and Polish-style noodles in a mushroom sauce along with a fresh fruit salad for a filling meal. While all the dishes were good, the pear/ham combo was particularly tasty. 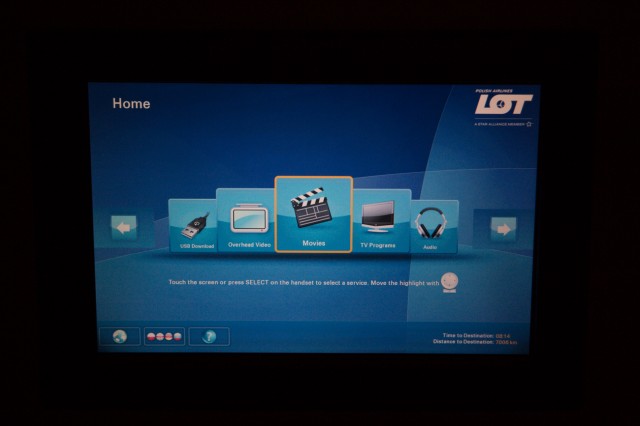 During the meal our attention turned to the inflight entertainment. Elite Club features a 15.4 inch screen located in the back of the seat in front. While it can be operated by touch screen, a remote located in the seat is the primary method of control. The selections are exactly the same as in Premium Club, with a modest offering of American movies and TV. If you speak Polish youâ€™re in luck as there are additional selections from Polish cinema. The other options, consisting of music (listen), moving map, games, and a section on the carrierâ€™s history were also available, though we did not play much with them. A set of headphones was provided, which we used to watch The Candidate.

Not long after the movie ended it was time to land at New Yorkâ€™s JFK Airport. Our plane parked at the same gate weâ€™d left from several days earlier, and a long walk through the bowels of terminal one (still unimpressive) led to an empty immigration hall. With no bags the total seat to curb time was fifteen minutes, most of which was walking between the plane and immigration.

Overall, a good flight. The seat was very comfortable, the food tasty, and the service friendly and effective. 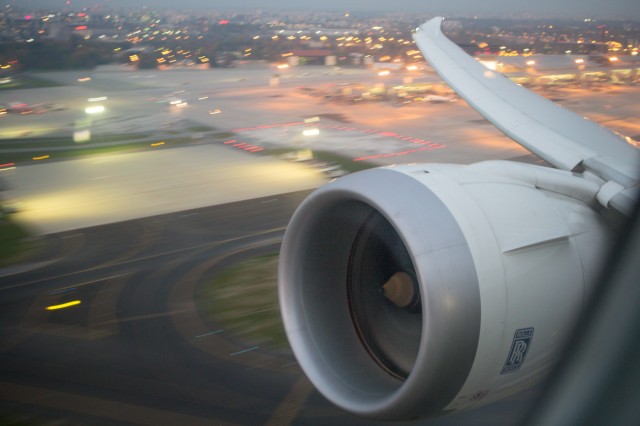 Perhaps the most beautiful parts of a Dreamliner – Photo: Jeremy Dwyer-Lindgren | Airchive.com

Of the handful of potential drawbacks, the choice to go with a 2-2-2 configuration in business was a bit curious. The setup leaves anyone in a window seat having to climb over their seatmate in order to access the aisle. Nearby regional competitor Austrian Airlines runs both 777-200 and 767 aircraft in the more trendy 1-2-1 direct aisle-access configuration. Yet despite a cabin that would appear less roomy, LOTâ€™s seats manage to be both wider and more spacious (19.37â€ vs 23â€ for width and 60â€ vs 78â€for pitch respectively). And it isnâ€™t just a 787 thing: ANA runs their seats at 19.4â€ wide pitched at 44â€, while British comes in at 20â€ and 73â€ respectively. Only Qatar has more on both fronts, with 80â€ of pitch and 30â€ of width. So while LOT may not have done away with the straddle of shame, they have some of the more generously sized seats in the region and one of the most spacious business cabins of the current 787 operators.

The other drawback, though admittedly looking more long-term, was the less than stellar inflight entertainment selection. While perfectly acceptable on our roundtrip frequent fliers will likely run through the existing content pretty quickly. Most of LOTâ€™s long haul flights are over eight hours, and a single round trip to New York and back could easily burn through half of the dozen Hollywood-style movies on board. Still, the display quality was excellent and the overall system very intuitive. If the selection is regularly rotated this could definitely be mitigated. Also, a bit small, but two power ports instead of one would be a nice plus.

Finishing out with praise, the food was excellent. Another journalist on board whom regularly surveyâ€™s premium cabins around the world remarked that the chicken dish rivaled the business class food heâ€™d had on five-star middle-eastern carrier Qatar Airways. The cabin crew was attentive and very friendly throughout the flight. They went so far as to make a hot chocolate, something they donâ€™t technically offer. 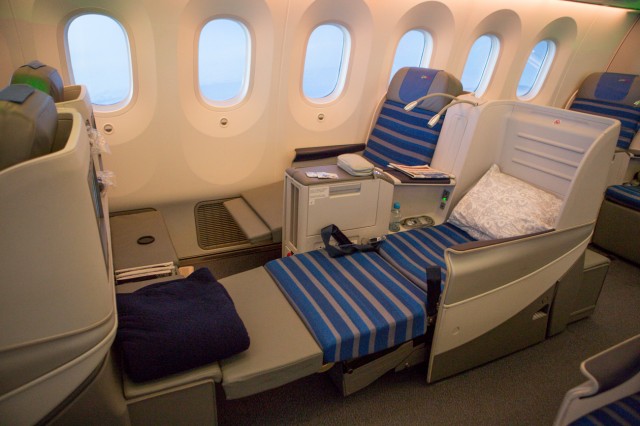 The seat is very comfortable in full flat mode. This, at least in the authorâ€™s opinion, is the most important feature of a business class product these days. And this author unintentionally slept soundly for five hours. Enough said.

Finally, as we said in the Premium Club review, the 787 factor is not to be underestimated. At the very least the Dreamliner is a major upgrade over the carrierâ€™s prior Boeing 767 long-haul fleet. But of course we believe it goes much further than that. The higher humidity and lower pressure continue to make a noticeable difference on long-haul flying, and, as said before, this author would go out of his way to fly a Dreamliner over anything else while crossing the pond. It is that much better.

Overall we enjoyed both of our flights with LOT Polish. Premium Club, LOTâ€™s premium economy offering, was particularly impressive. LOT tells us the cabin has not been selling well, which is surprising. The food and service were every bit as good as business, and for significantly less price. Business class, as we wrote above, was good as well, meeting or exceeding most expectations. Their hub airport of Warsaw is modern and the lounge, while small, was well appointed and nicely decorated. The experience was in line with any European competitor weâ€™ve flown with thus far.

More broadly however, the carrier continues to face questions about how they fit into the complex tapestry that is the European aviation scene. Their small long-haul fleet primarily caters to tried and true cities with large Polish expatriate communities. Meanwhile, their short-haul fleet has seen drastic reductions, a combination of heavy competition on the routes and restructuring from earlier in the year. Their all Dreamliner fleet has proved at times to be a blessing and a curse. While the worst appears to be over the airplane is still largely responsible for the companyâ€™s latest spat of financial woes.

Yet if the carrier can manage its way through this difficult time brighter futures likely lie ahead. Once the kinks get worked out the Dreamliner will provide a substantial economic advantage over competitors. What is left of the short-haul fleet of Embraer 195s is more efficient and effective than the Boeing 737-400s they replaced. To increase demand, tourism-based marketing efforts are receiving a renewed focus on two fronts: drawing new visitors into Poland while enticing the growing Polish middle class to spend their dollars travelling abroad (on LOT, of course).

Things look good for LOT on the horizon. The challenge, of course, is getting there.

Thanks for posting this. We were considering LOT for our trip to Europe in September. After the 787 grounding, and LOT announcing they wouldn’t fly the 787 until October, we booked with LH instead. I was pretty disappointed when 787 service resumed early – but on the night of our trip the LO flight was delayed a few hours, whereas LH was on time, and on the return, LO probably was cancelled after they had some probs and had to land in Iceland. We visited Krakow too, and we thought it was terrific. I’m glad you enjoyed the trip!

Great information for all of us! Nice job.
I am so pleased to see LOT flying high with it’s new B-787 airplanes. The seat width is indeed unparalleled. There is not other way to travel to Warsaw and beyond through Poland.
Thanks again for the informative write-up!

European airlines are supposed to provide great, classy service. Well Lot gives an excellent service in a brand new plane. Food is superb, plane is very clean and fresh and the time pass without notice. Lot skytrax rate should be increase at least to a 4 stars airline.