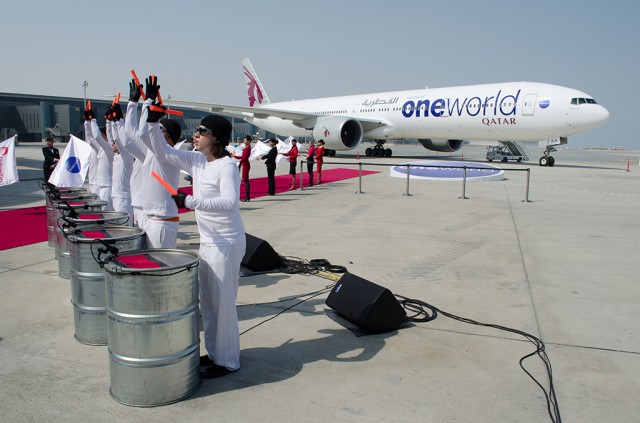 A Ceremony in Doha, Qatar to celebrate the joining of Qatar Airways to the oneworld Alliance – Photo: Airchive.com 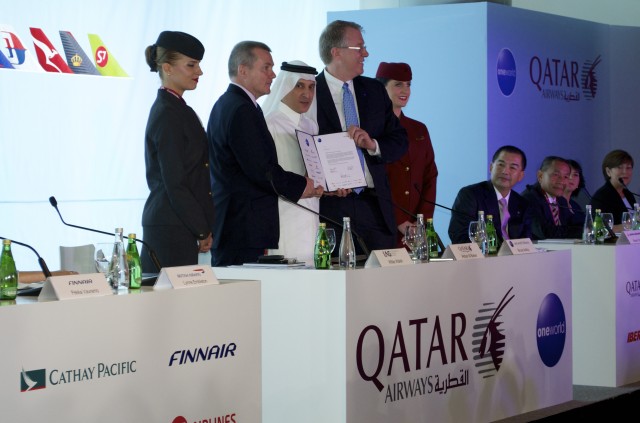 At a ceremony at the new Hamad Airport (previously referred to as the New Doha International Airport) Qatar was joined by other oneworld member airlines for the traditional document signing, thus signaling the official joining of Qatar Airways to the alliance. Qatar Airways’ Chief Executive Akbar Al Baker said: ’œAlliances are playing an increasingly important role in the airline industry today ’“ and that will continue long into the future. Becoming a member of oneworld is one of the most significant landmarks in Qatar Airways’ history. It will strengthen our competitive offering and give our customers what they fully deserve ’“ more choice across a truly global network served together with airline partners who include some of the best and biggest in the world.” 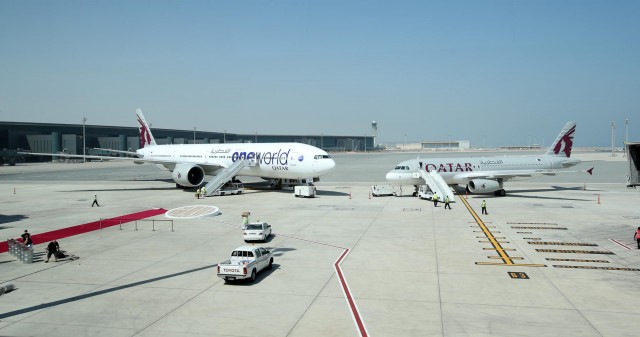 After the signing, flight attendants from all member airlines lined a red carpet for the reveal of the newest oneworld-liveried aircraft. A Boeing 777-300ER (A7-BAA) was flown directly into New Hamad Airport, being the first Qatar Airways aircraft to land and park at this yet-to-be-opened airport (expected in 2014). Resplendent in the oneworld livery, the aircraft was joined by members of the media, guests, and the Prime Minister of Qatar.

The first flights to depart after midnight (QR1166 from Doha to Riyadh, Saudi Arabia & QR633 from Dhaka, Senegal to Doha) saw the real beginning of the membership, as passengers could receive reciprocal benefits from other oneworld members & experience program link benefits as well. As oneworld Chief Executive Bruce Ashby stated, ’œoneworld aims to be the first choice alliance for the world’s frequent international travellers ’“ with an unrivalled collection of quality carriers, delivering unmatched benefits to customers and to member airlines alike. Qatar Airways’ addition as our second member airline in the middle east makes oneworld the leading alliance in what is one of the world’s fastest growing regions for air travel demand. When Qatar signed the documents to join the alliance, they became the strongest of the 3 global alliances in the middle east. Utilizing the Doha hub, oneworld now has an extensive new middle east network that rivals any other major power.”

As the oneworld carriers celebrate the join by releasing a double miles promotion for the next two months (almost a tradition, as the same was run for Air Berlin when they joined), a few of the other benefits of the new membership come into effect. Have you got American AAdvantage miles to burn? Well you can use them to get to places like Kilaminjaro or The Maldives easier. But one small piece of information has disappointed top-tier elite frequent fliers. Oneworld Emerald members should receive First Class lounge access, and with Qatar’s amazing Premium Terminal, some were foaming at the mouth in anticipation of accessing this amazing facility. However, it is not to be, as Qatar Airways is instituting a policy similar to British Airways, whereas only those flying Qatar Airways im premium classes (First & Business) will be able to access the Premium Terminal; all economy guests holding relevant status will get lounge access still, but in a different lounge (similar to the BA Concorde Room policy, where only those flying British Airways First Class have access).

As 2013 comes to a close, we look to next year and oneworld is set to get stronger again, as the alliance is preparing to welcome more airlines into fold. Sri Lankan Airlines has been confirmed to join in April 2014; TAM should join as well after leaving the Star Alliance to align themselves with sister airline LAN. Also US Airways should hopefully join as they merge with American (if all goes well, that is, but that is another story). Is Qatar’s joining of Oneworld a sign of things to come? As the first of the major middle east carriers to join an alliance, will others follow, or is this just Qatar’s way of competing against the other carriers? Time will tell.

Hi Mal, thank you for your thoughtful write-up of this momentous occasion in Qatar Airways’ short history. We are grateful to have the opportunity to partner with some of the world’s best airlines. Our customer are surely the winners here. We could not be happier.

Keep up your great coverage of the industry. We really enjoy following your work.

Michael, thank you for your kind words. When Airlines like Qatar do smart things, we have no problem telling everyone about it.