Two months ago a number of folks broke news that the much-anticipated Delta Air Lines Boeing 717-200 had finally started showing up in reservation systems. For aviation enthusiasts, it’s an exciting time when an airline brings on a new aircraft type, especially one like the 717. The 717 holds a special place in many hearts for a number of reasons, chiefly because it’s an ultra-modern descendant of the Douglas DC-9s and MD-80s which have a cult following with pilots and AvGeeks alike.

In 2011, Southwest Airlines acquired AirTran, a 717 launch partner who also happened to fly the largest fleet of 717s in the world. Aviation enthusiasts questioned whether Southwest would go against their all-Boeing 737 business model that had served them so well over the decades. Much to the surprise of many aviation industry analysts and insiders, Southwest announced they would indeed incorporate the 717 into their fleet. Â However, those plans never came to fruition. In 2012, Southwest and Delta announced a sweetheart deal which would allow Delta to take possession of the former AirTran birds, allowing them to retire a number of older DC/MD variants and giving Southwest the ability to maintain fleet uniformity.

After digging around on Delta.com, I confirmed the first scheduled 717 flight was supposed to be 2343 on 9/19 from ATL to EWR. I had already booked a mini-vacation to the NYC area for that weekend, so the timing simply could not have been better. I almost canceled my outbound leg and booked this flight instead…almost. Understanding that new equipment is often subject to last minute changes,Â  I decided a call to Delta was in order. 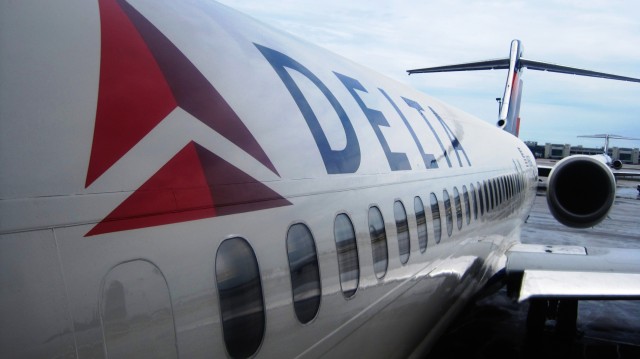 Contacting Delta to confirm the inaugural details seemed prudent, if only to verify what I was seeing on their website and if the AvGeek community’s speculation held water. Better yet, I wanted to get assurance that there was a reasonable degree of certainty that 2343 on 9/19 would indeed be served by a 717. Sadly, I never heard back, so I assumed that they weren’t confident in the date and I decided not to book. 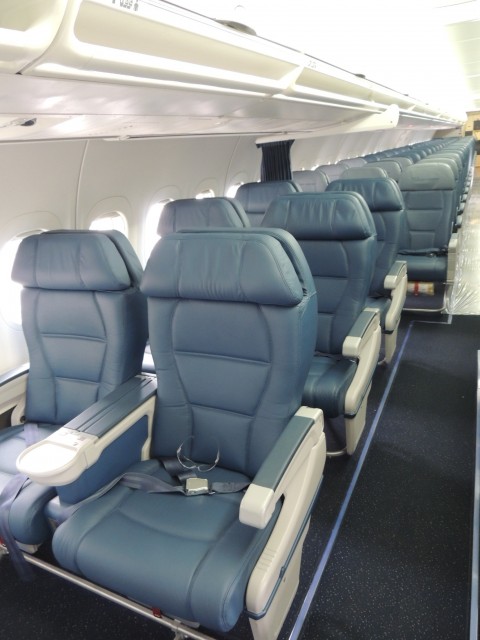 Brand new interior with 2×2 up front and the 2×3 in back. I bet this bird comes with the iconic “new plane smell” too. Photo: Delta Air Lines

At the moment there are still a lot of unknowns around Delta’s new 717 service. The airline has been incredibly (and unusually) tight-lipped on the topic. So rather than focus on what we don’t know, I thought it fitting to recap what we do know:

I’m excited to see one of my favorite planes get a new lease on life with a strong carrier like Delta. Let’s hope that the November 1 date holds.

I’m glad that Delta invested a few bucks to refurbish those airplanes; the interiors were getting a bit tired. That said, the B717/MD-95 is a strong, reliable airplane, one build on a solid background. While others may be more efficient, the 717 bridges the gap in Delta’s fleet between the BIG airplanes the smaller regional jets that they must reduce due to pilot contract issues. With 88 frames headed into their fleet, the service entry delay may well be related to crew training and having to write an entirely new set of SOPs to Delta and FAA standards before they can fly revenue. And… since staffing requires multiple crews for each of the 88 airplanes (3.5 – 4.5 depending upon how the airplanes are used.), a boatload of Delta First Officers can upgrade to Captain a bit earlier than they had expected.
Personally, I’ve never liked the DC-9 series. Just like the old 727s, unless one rides at the pointy end, the noise factor is horrible. Still, it is a reliable and well-proven series that has served the industry well. I doubt that Delta will keep them for more than 10 years, but in the interim they squeeze every possible revenue hour from these airplanes. They got a great buy on a substantial fleet, one that will hold them over until more of the much newer airplanes come into service.
Yes David, I’ve been mute for several months. I don’t like leading the list. OTOH, I am **seriously impressed** by the changes and improvements you have made in the last year. The writing is professional and their is a copy editor someplace in your group. It shows and it is appreciated. In time, those improvements will expand AR’s opportunities and access as well as enhancing the value of your site. Congratulations! [Mute Mode now=ON].
C.

Great insight, thanks for commenting, Cook! 🙂

Kind of cool that they operate the first generation of the aircraft (DC-9) and the most modern generation (717).

Agreed! Fun to see the new generation within the same line to be the ones replacing the DC-9-30/50s