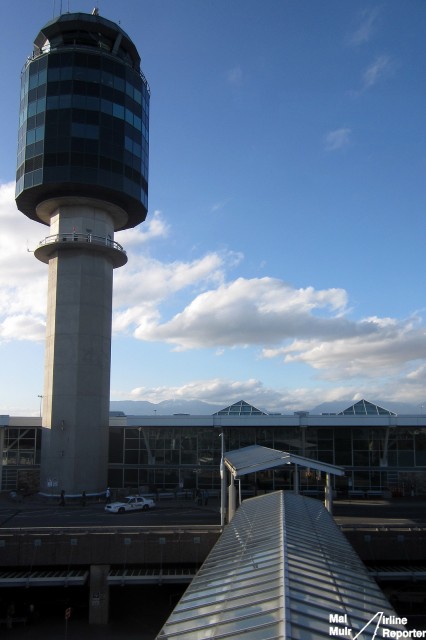 A panoramic view from the top of Vancouver Tower…if only the weather was better, right? – Photo: Mal Muir | AirlineReporter.com

The view from the tower gives a commanding 360-degree oversight of the airport allowing the controllers to effectively do their jobs.  Working in eight-hour shifts, the controllers move around a variety of positions split between the north and south sides.  Since the airport has two parallel runways (on opposite sides of the facility), separate operations allow effective air traffic management.  To the north is 08L/26R, the shorter of the two runways.  Being on the north side means it’s closer to the city and, thus, this runway has noise restrictions at certain times of the day.  The north controllers also look after all ground and air traffic (arrivals & departures), utilizing this runway during opening hours, usually for arrivals. 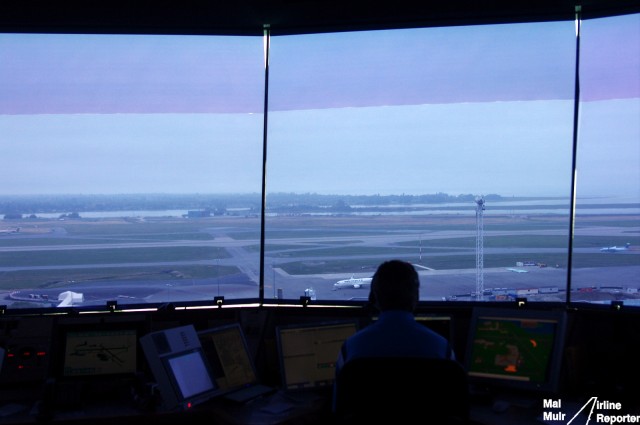 A Controller at work on the South Control Desk at Vancouver Tower – Photo: Mal Muir | AirlineReporter.com

To the south lies the longer Runway 08R/26L, what some might consider the ’œmain runway’ at YVR.  The south runway predominantly gets departures when the north runway is open, and when it is not, everything will arrive and depart on this side.  The south side of the airport is also home to the Vancouver Airport seaplane base, which lies on the river just adjacent to the airport.  With Harbour Air & Seair both operating out of the river to surrounding islands (like Nanaimo, Victoria, etc.) and coastal areas, the south controllers have a big job.  It can get quite busy especially during the summer months. The south side can see as many as 300 daily float plane movements alone.

Vancouver Airport is the second busiest tower in all of Canada, seeing around 1,100-1,200 movements per day in the peak of summer.  In 2012, the tower handled over 300,000 movements over the entire year.  That’s a lot of metal tubes coming and going.

To manage all the traffic, Nav Canada uses it’s own custom-designed software that looks fairly simple to use.  The staff in the tower showed me a display that illustrated all of the aircraft coming and going from Vancouver Airport, then with a few key strokes they were able to expand that out to every aircraft in North America.  I was stunned as the screen filled with lines and aircraft, it is just amazing what’s possible with technology.  This job may look easy, but it definitely isn’t.

The tower controllers in Vancouver only do part of the overall job.  About 30 minutes south of Vancouver lies the town of Surrey (almost a suburb of Vancouver) where you will find the Vancouver Area Control Centre (ACC). These are the controllers that handle what you would hear on LiveATC as Vancouver Approach or Departure or even ’œVancouver Centre’.  It is a non-descript building located behind a Costco.  There are plenty of administration areas, training rooms, and lots of open space.  But as you walk through the door into operations, you are lost into a different world — one where silence & constant noise somehow meaningfully coexist. 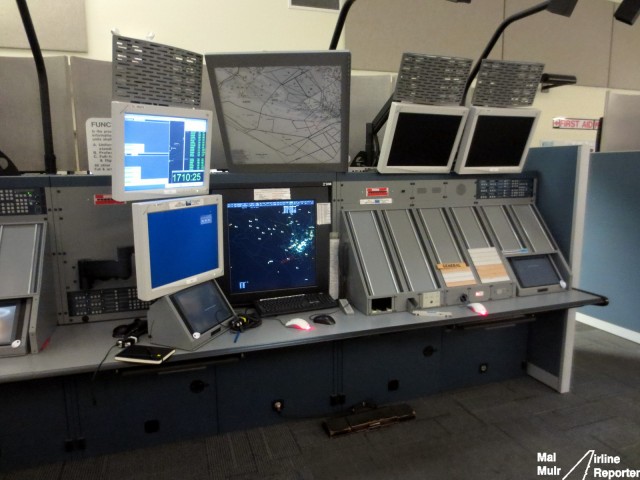 The ACC is set up with stations spread out around the perimeter of the room, with a central area coordinating the action.  Each of the stations are identical so you can move from one to the other and slot in without a problem.  As staff changes over, they rotate in and out; the only way you know is the change of voice.  They can operate the desk within moments (after a brief handover from their colleague, of course).  As you walk around the operations centre, you are drawn into a different world compared to the tower.  Whereas a tower controller can just look out the window with a pair of binoculars to perhaps see their aircraft, these controllers rely on the radar screen.  The large and multiple screens are configurable in many different ways allowing customization between the different positions.

Bonus: Check out the Vancouver FIR and see just what area it covers

Vancouver ACC controls a large swath of southwestern Canada (known as Vancouver FIR or “Flight Information Region”).  Most of British Columbia is under their guidance and even small little pockets of Alberta to the east.  The one thing that shocked me was that they also control approaches into Bellingham, Washington (BLI), just to the south of the Canadian border.  As BLI has seen a rise in traffic over the last few years, it is so close to the border and their approach lines cross some of the Vancouver approach areas, it makes sense to have one area controlling it.  A similar situation occurs in Detroit, where FAA controllers look after Windsor in Ontario, Canada.

Across the two facilities (Vancouver Tower and the Vancouver ACC) there are approximately 350 staff working various roles.  Becoming one of the controllers requires a variety of skills and on-site training. Where a tower controller may only have orientation training of four-to-six months, the ACC could be seven-to-14.  Both have paid on-the-job-training that can last as much as another year.  So start to finish could be almost 2 years! 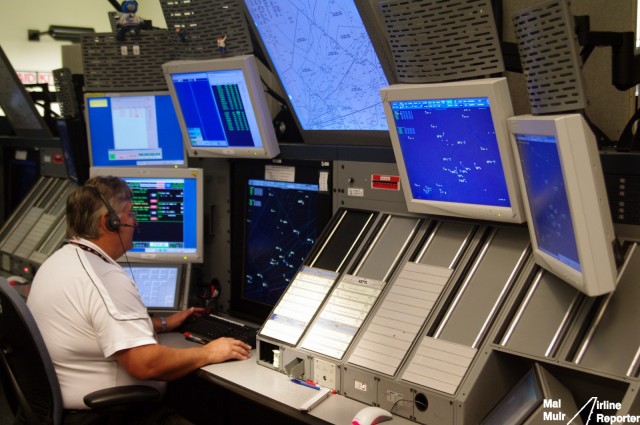 Although my time with both the ACC & the tower was short, it gave me amazing insight into just what these people do on the other side of the radio.  So next time you’re  listening in to LiveATC, perhaps think about just what it is like to be doing the Air Traffic Controller’s job.  It may not be as easy as you think (but still quite challenging and fun).

Dearest air control guys and gals! I and many of my neighbors here in Ladysmith would be forever indebted to your pilots if the flew over the channel or the trans Canada highway on their way to Nanaimo airport. It”s just 3 blocks to the east of our homes and makes all the difference in the world. Please please pleaseâœŒï¸