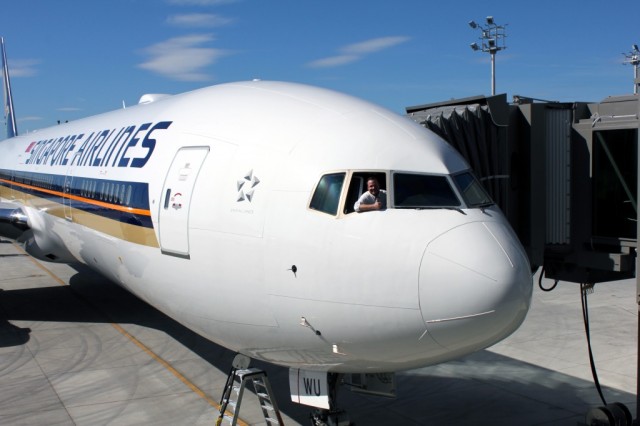 Given the success and growth of AirlineReporter.com, I thought it would be both fun and informative to check in with David Parker Brown (@ARdpb), Editor-in-Chief and Founder of the site.

It is possible that many of you have found AirlineReporter.com recently and discovered more AvGeek goodness than you could possibly imagine.  Some of you have been reading and commenting for years.  A small group of early adopters have been reading since the early days.  Undeniably, AirlineReporter.com has grown by leaps and bounds over the years, and it’s all because of amazing readers, dedicated writers, and a unique focus on airlines, airplanes, travel, and the interesting parts of the industry.

I don’t remember exactly at what point I found AirlineReporter.com, but it was in the early days.  I remember taking the time to go back and read all the archived posts, fascinated that someone was writing stories about topics I was so interested in.  Once I commented on a post, David realized he and I had a connection – we had mutual friends in college and lived in the same residence hall for two years.  After my 77-hour trip to Singapore experience, I started writing and editing for the site; most of my work is done behind-the-scenes to help our team bring you excellent content, and help David formulate and refine story ideas.  I pitched him the idea of this story, and he (reluctantly) agreed! Here is our interview… 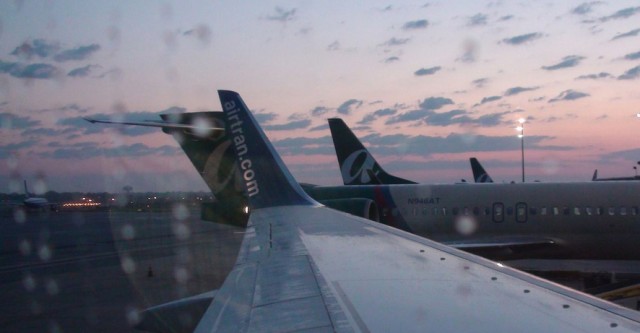 The first story that required travel for the blog was covering AirTran and their Wi-Fi, back in 2009.

Blaine Nickeson (BN):  How did the site get started?
David Parker Brown (DPB):  I was back visiting my mom one day in 2007 and saw an airline book sitting around.  I have plenty still in the house that I grew up in, but this one had been the first I ever purchased with my allowance way back when I was a child. I flipped back through and realized I had every page memorized. At the time, I thought there couldn’t be too many people who could shared my love of airlines, but was somehow motivated to try to share my interest.

I was a pretty early blogger, starting my LiveJournal back in 2000. I was only user #1082, at a time when most people had no idea what a blog was. Between that time and starting this site, I had tried other projects online, but just didn’t have any passion for them.  Finally, I decided to try and combine the two, paid $10 for a domain name, and started writing. It turned out there are a heck of a lot of people who shared my passion, and the site kept growing.

BN: What were you expecting when you first started the site?
DPB: Not much. Mostly an outlet to share my interest in airlines and aviation. Really I thought the best case scenario was maybe someday I would get a reduced admission to an airshow and be able to write a story about it.

BN:  What has changed since then, and what’s still the same?
DPB:  About the only thing that has stayed the same is sharing the passion for all things aviation. Even the name has changed (it started as The Airline Blog, but it changed pretty early on). The site keeps growing, trying new ideas, telling different stories; they are all kinda neat in their own right. A big change was bringing on people to help create more content, but while still keeping the same tone (ie adding a little humor and snark into most of our stories). 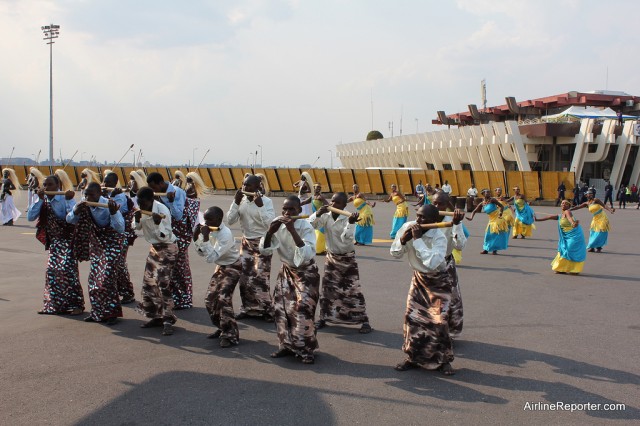 BN: What is the best trip report/experience you’ve had while writing for AirlineReporter.com?
DPB:  This is like being asked to pick you favorite child!  I was able to narrow it down to three, in no particular order:

BN: What are you most proud of?
DPB: Our team has flown over 217,000 miles this year to bring stories to the site – that is totally amazing to me – and I know we have many more miles to add before the end of the year. We are still a small team and so many airlines and destinations have trusted us to cover their stories. Back in 2009, I was offered my first flight for the blog; I got to travel to Baltimore from Seattle to cover AirTran being the first airline to have their entire fleet equipped with Wi-Fi. In 2010, we had our first international flight to cover the new Haneda International terminal, which opened up the door to so many more opportunities. Since then we have been circled the globe countless times — we just need to get to Antarctica. 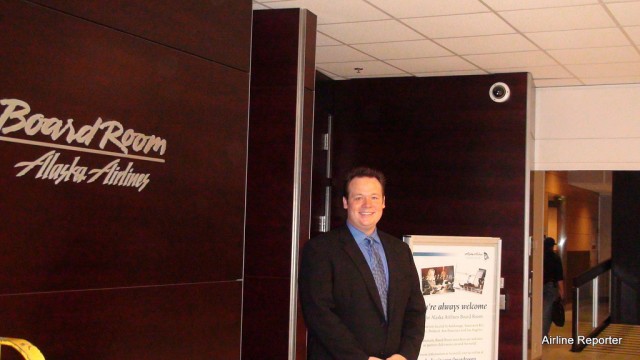 BN: Do some in the industry not take the site seriously?
DPB: Less and less now, but some airlines and other companies do not fully get what this site is about and what we can do to tell their story. But part of our job is to prove that there is a big population of people who love the airline business.  When I first started, I realized it would be a challenge to have people take the site seriously. So, I decided one day to just pitch a meet-up to Alaska Airlines and Horizon Air, and let them see I was a real person – I was shocked when they said yes. They agreed to allow me to do some fun stories, like checking out their lounge, which I was able to use to show other airlines what we were about.  Now, it is really cool that we have many airlines pitching us to do a story on them. I would never have guessed that at the beginning.

BN: What story did you almost not publish?
DPB: Besides this one? Ha. Without question, my A Confession: I Used My Passport For the First Time Ever in 2010 story. I was running a website about airlines and travel and I had never traveled outside of Mexico and Canada? The horror! I wrote it up and held on to it for months. One day I was short on content and just hit “Publish.”  I was really happy to see that my message of “Don’t question it, just travel!” was pretty well heard. This has turned into one of my favorite stories to date. 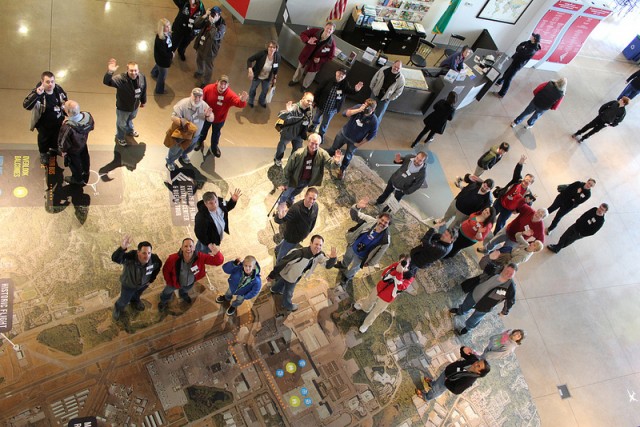 BN:  Who have been your mentors/influences?
DPB: There have been quite a people who have influenced me and the site. No question Jon Ostrower (he will always be the FlightBlogger to me) provided me with amazing motivation to keep on going with the site. Today I still respect all the work that he does and I have to admit that I still get a bit giddy anytime Jon mentions us on Twitter.

I also need to mention Sandy Ward and the fine people that work at the Future of Flight. They supported me and the blog back when I was happy to see more than 40 people per day visit the site. They quickly became my first AvGeek family and we have gone on to do some pretty amazing things with them, like Aviation Geek Fest.

I know this probably will sound cheesy, but you, the readers, have really influenced the direction of the site. Given me ideas, shared stories, taken the site in new directions, and supported me to keep going. You have shown that what we do is interesting, entertaining and important.

BN: What is the one thing readers would be surprised to learn about you?
DPB: I hate writing. Okay, “hate,” is probably not the right word. I am not a fan of writing about things that do not interest me. I can easily write a 2000-word story on an aviation, but on most other topics, it would be like pulling teeth. 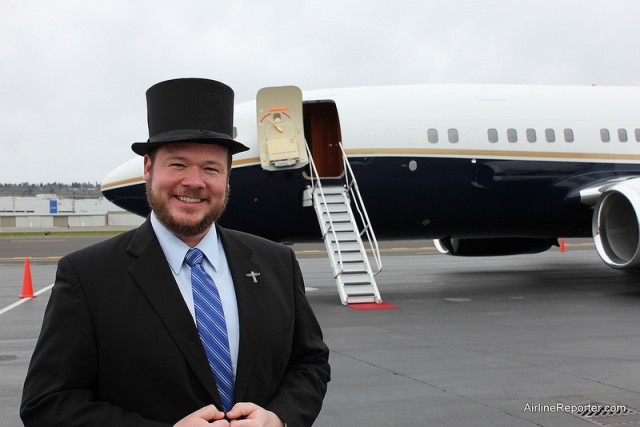 The site started with a sense of humor and will continue to have one as we grow.

BN:  How do you handle negative comments?
DPB: At first it was tough, but I have grown a thicker skin.  Early on, my mom would email or call me, concerned that people were insulting me in the comments. Eventually, she decided to stop reading the comments, which was probably a good call. In most cases a negative comment means that we got something wrong – and I hate it when we are wrong. I still love both good and bad comments – it means that one way or another people are reading and are engaged.

BN: Where do you see the site going?
DPB: I love the site. I love creating stories. I love helping other people share their passion. I do not want us to lose our roots of providing a unique look at the airline business, aviation and travel. 2013 has been about keeping up with content and growing in writers and I think in 2014 we will still continue down that path, but at the same time increasing our quality of writing and getting into new areas that we have not explored before.

Why Iceland is Not Just a Stopover, But a Destination – PART 2
Test Run: Alaska Airlines to Fly Q400s at Home in Alaska
7 Comments

Great idea for this interview. Some may find it cheesy, but to know the roots of this web site is interesting. Can’t wait to see what this interview will be like in 5 to 10 years. Great job by all you!

Put it this way, there’s a company that flies IL-76s to Antarctica during the summer… We’ll get there yet.

We still gotta get to Africa this year!

Great story, Blaine! Glad you were able to talk DPB into it. “Get to know you” stories are great for sites that want to be personal. And that’s I think what DPB is all about, keeping the site friendly, close to its roots. Not a boring NYT or WSJ type site, but a site staffed by those with true passion for what they do. Well done to both of you. -JLJ

Great story! Its wonderful to hear more about the history of this site. Im a daily reader and Aussie AvGeek and get excited everytime I read a new post – Keep up the excellent work!

There was just a story that Air New Zealand was going to try charter flights to Antarctica using 767-300’s. Maybe you can hitch a ride??

Great idea this interview, brings us readers closer to you! I love this site and read it almost daily. There is a guy in Brazil you should contact: Gianfranco Betting. He writes for aviation magazines since long ago and has a similar site, like yours, for years.
Keep on with this amazing job!