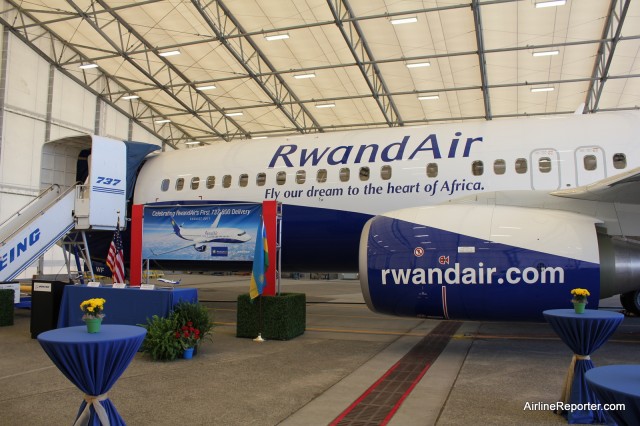 RwandAir's first Boeing 737-800 sits in a hangar at Boeing Field.

What does a Boeing 737 mean to you? For most, it is a common airliner found around the world. For many airlines, it is an reliable revenue-making machine. However, for others it is more than just the sum of its parts. For RwandAir and the country of Rwanda it represents progress and national pride that no one can put a price tag on.

Rwanda is a country with a troubled past (I will go into more about that in a future story), but they have come so far in a very short amount of time. It is a land locked country, looking to grow. To successfully do so, they need a viable air transportation infrastructure. RwandAir operations were started in 2003 to help Rwanda achieve that goal. 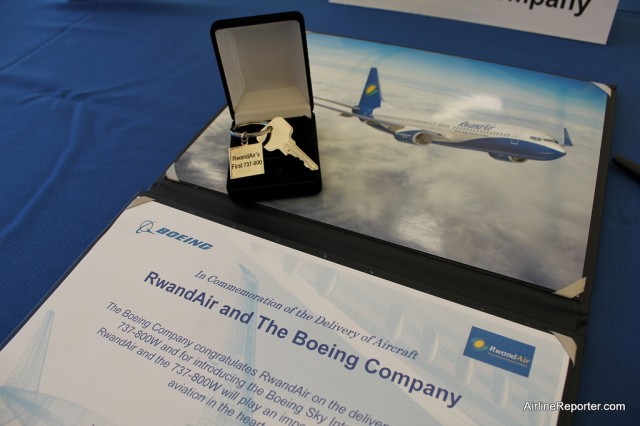 Boeing gave RwandAir keys to the plane. No, they are not needed to start the plane.

RwandAir recently took delivery of their first new airliner ever: a Boeing 737-800 with Sky Interior. I was invited to tag along for the delivery and the flight of the aircraft from Seattle (SEA) to Kigali, Rwanda (KGL). I was able to stay a few days in Rwanda and learne more about the culture, the people and the drive to grow as a nation. I will share these experiences in a multi-part series from the pre-delivery dinner to my experiences in Rwanda.

How does an airline get a plane made to only fly about 3,000 miles from Seattle to Rwanda? I did not know, but I surely wanted to find out. The adventure started with a special dinner held at the Museum of Flight under an SR-71. It did not take long for me to realize that this was not only about getting a new airplane, but it was about celebrating the progress that Rwanda as a country has made. 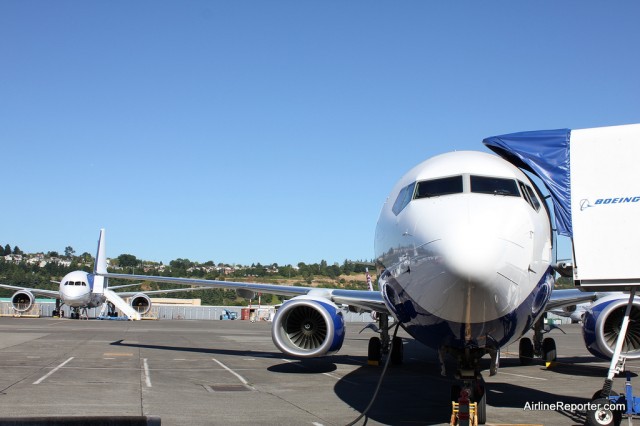 During his passionate speech during dinner, the CEO of RwandAir, John Mirenge, stated that he knows “what aviation can do to change lives and nations.” Mirenge hopes to continue to build his airline with additional aircraft (including the Boeing 787 Dreamliner) and vows to come back to Seattle, “We will be regular visitors in this town. It is a dream come true.” As previously reported, RwandAir hopes to reach 12 aircraft in the next five years and to 18 aircraft by 2020. The dinner eventually wound down and people prepared for the long flight starting the next day.

Originally, the delivery flight was supposed to take off at 11am on Thursday August 23rd. There were two delays that happened, but since we were only a group of about 30 and we had no formal plans, it did not matter too much. The first delay of 2pm was because the airline wanted to install their in-flight entertainment software, which takes three hours and they cannot start the process until the money is exchanged. However, there were some computer issues and a power blackout at the bank, which resulted in a delay in transferring the money. Luckily it finally came through, but the flight ended up being delayed an additional 3.5 hours to about 5:30pm. 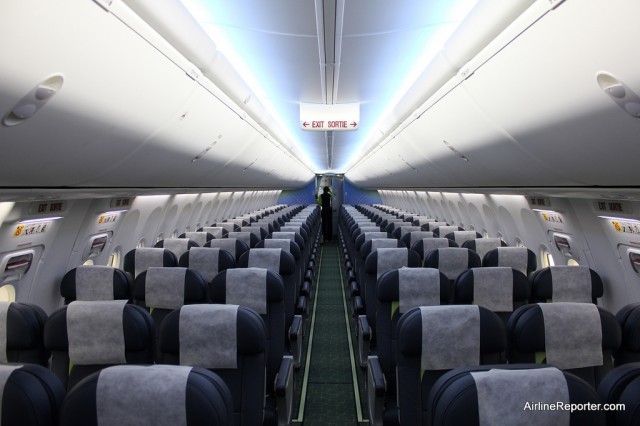 The new Boeing Sky Interior is pretty slick, especially for a flight which will take about 20 hours.

This was okay since Boeing had RwandAir’s 737 in a hangar with food, drinks and music, giving us an opportunity to check out the aircraft. After we realized how long the delay was going to be, Boeing got a shuttle van and drove everyone to a local bar to have some drinks. It was quite awesome to have the CEO of RwandAir serve you a beer.

We were not there too long before we got the word it was time to go. We all piled back into the shuttle bus and headed back to the Delivery Center. Before being able to board the aircraft, everyone has to go through security, just like you would at the airport, but these security guards  seemed nicer than those found in airports. While we were enjoying our beer, Boeing had the 737 towed right in front of the delivery center. After a few more photos, it was time to get on board to start our adventure. 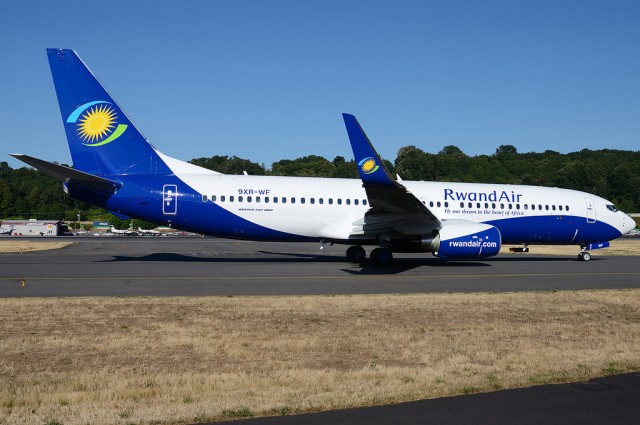 Seats were not assigned and I had the pick of almost any row in economy. I first went straight to the exit rows, thinking I was being smart, but darn it. The armrests in those rows did not move, so they were no good. I decided on Row 14 and I took over seats A through F for me and all my stuff. Even with having an entire row, I wasn’t too sure if I would remain comfortable during an almost 20 hour flight.

I could feel the excitement and enthusiasm on the aircraft as we were pushed back to taxi out. As we moved down the taxi way, I could see Boeing 787 Dreamliners and 747-8’s out the windows — that never gets old. We taxied to the end of the runway and took off quite quickly due to the light load. We were off on our big adventure — next stop Iceland, then a night in Istanbul before arriving in Kigali, Rwanda to a cheering (and dancing) crowd.

Sounds like a really cool trip–looking forward to reading more. BTW–the 3000 mi range is fully loaded with fuel, pax, bags, etc. It can go farther when relatively empty (like 30 pax on your flight). Privatair, a charter airline that supplies narrow body aircraft such as 737s and A320s to airlines in an all business class layout with far fewer pax than a coach config, routinely flies these planes trans-atlantic, even though normally they wouldn’t have the range.

Thank you again for taking the time to document and share your trip/experience.
A delivery flight is something most of us will never experience – especially to somewhere as interesting as Central Africa.

Looking forward to the next installment – especially your take on Rwanda.

Looking forward to your article on Rwanda.

What a great read so far. I can’t wait for, as Paul Harvey used to say “the rest of the story”

Nice article…looking forward to reading the upcoming parts. I’ve read and heard so many wonderful things about Kigali, and would love to visit Rwanda one of these days. I sure wish Rwanda and RwandAir the best of luck and success, and hopefully it will not be too long before a non-stop USA-Kigali flight on a 787.