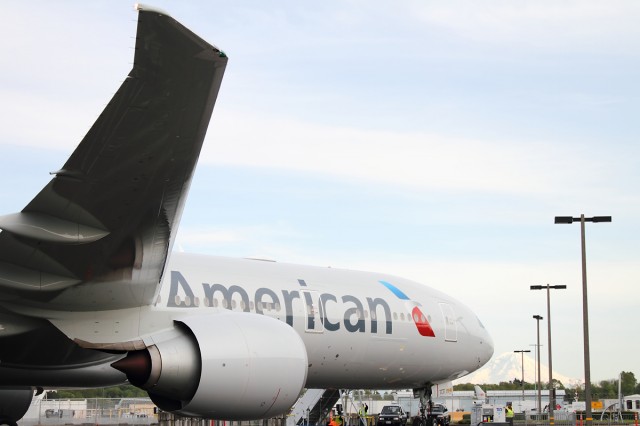 I recently had the opportunity to hang out with American Airlines while the carrier and Boeing enjoyed some festivities prior to the airline taking delivery of its sixth 777-300ER (77W) on April 11th.

Everything began early in the morning with a short drive from the Crowne Plaza Hotel in downtown Seattle to Renton, home of the Boeing 737 final assembly lines. Although we were set to fly the 777, American had recently placed a large order for the 737 NG and MAX. 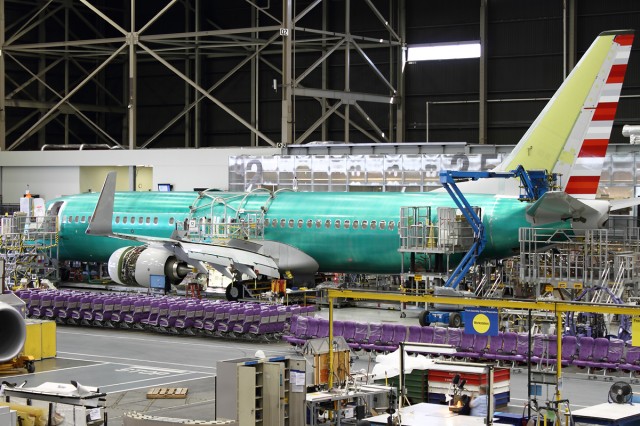 An American Airlines Boeing 737 on the factory floor. Image by Brandon Farris.

It is always fascinating to get the opportunity to tour the 737 line since it is not typically open to the public. Although I love the airlines, the highlight of my day was being able to take a photo with my Grandmother, who works in the factory.

Following the tour of Renton, we loaded back onto the buses and headed off to meet a charter flight at Paine Field full of American employees that were brought up from Dallas/Ft Worth for the festivities and events. American flew them up in a brand new 737 (N923NN) that had just been delivered to the carrier 14 days previously.

After picking up a couple of people we loaded back onto our buses and continued on to the Everett Boeing factory. There,Â  we got to meet the Boeing K9 Security Team as they swept our bus and belongings. After clearing the gate, we drove between the paint hangers where we had a great view of the first British Airways 787! 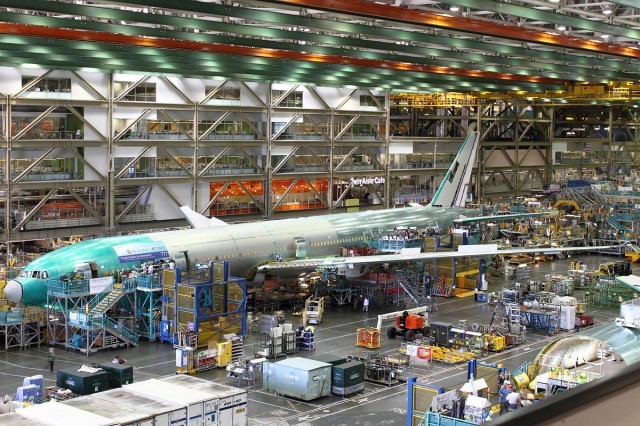 A Boeing 777-300ER on the factory floor. This one is for Thai Airways. Photo by Brandon Farris.

We then approached the 777 final assembly line where they had already begun putting together the 1,110thÂ 777 destined for Qatar Cargo. Not too bad, knowing that Boeing had just delivered the 1,000thÂ to Emirates a little over a year ago.

Our media group began upstairs on the view deck where we were able to see the 787 final assembly before heading down to the 777 final assembly floor. We walked along to the different positions to see the many stages that the aircraft goes through while being manufactured for its customers. 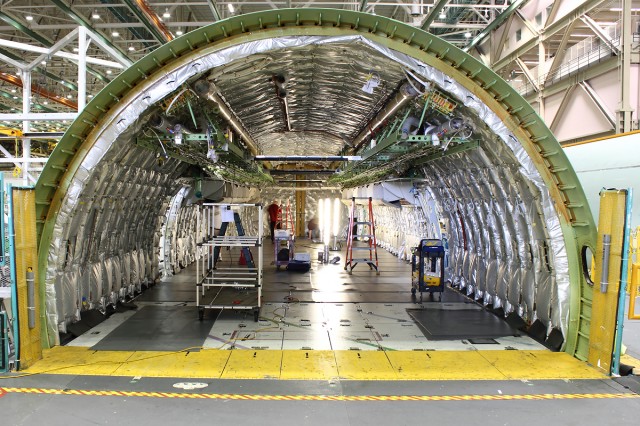 Inside of a Boeing 777 on the factory floor. Photo by Brandon Farris.

Boeing took us all over the factory, gave everyone a very detailed tour and allowed us to photograph anything and everything we desired which was an amazing opportunity, since I had only been in the factory for a media event once previously.

After we wrapped up with the tour we made our way back to Seattle for a brief break at the hotel before heading over to The Museum of Flight and Boeing Field for a dinner party to celebrate the delivery of the aircraft. Boeing had flown the plane down from Paine Field earlier that morning and towed it over for all of the employees and media to check it out in the parking lot of the Museum of Flight. 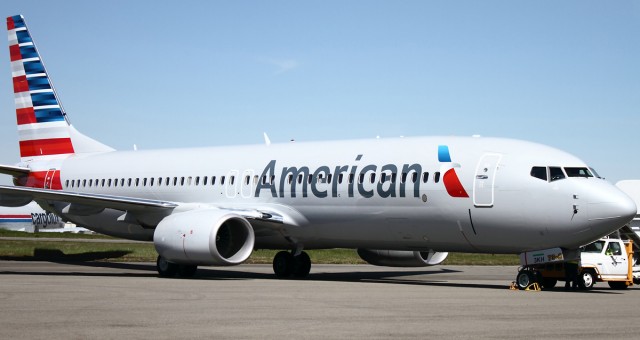 An American Airlines Boeing 737 arrives with employees from Dallas. Photo by Brandon Farris.

Following the photo op we were all brought in for the meal and to discuss why these employees were there for this event. As one American executive put it, this group of employees have been the â€œdream liftersâ€ through this bankruptcy, new identity and merger and that is why they had been selected to partake in the special delivery event.

Many have asked why was American Airlines making such a big deal about their sixth 77W. They explained that it just had to do with the timing; from when they took delivery of the first and second ones it was around the holidays when everyone is busy.

The reason that they didnâ€™t do anything for the following two was due to them not having the new scheme/branding on it yet and then at that point they targeted the sixth aircraft for all these events. Technically the fifth 77W was the first one to deliver officially painted and ready for service!

During the event, I learned that American’s classic MD-80â€™s will in fact be re-painted with the new identity. The airline plans to use them until 2020, which is different than them initially stating they would be using them until 2018. I personally cannot wait to see the new livery on the MD-80 and Boeing 757.

There will be more coming on the event soon, when I share my flight experience on the 777-300ER from Boeing Field down to Dallas… stay tuned.