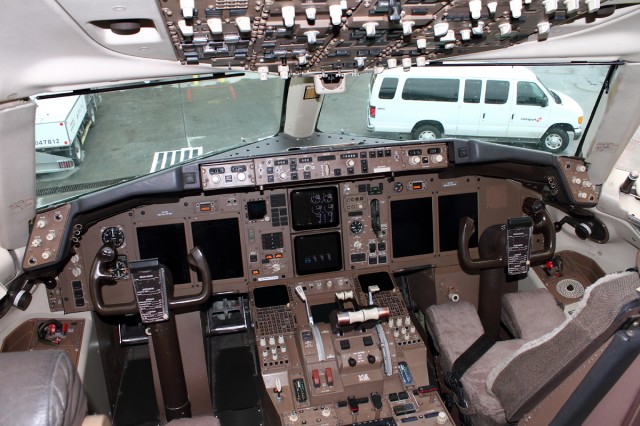 The airline began twice weekly service there last Thursday with about 140 people on board for the departure. The Boeing 757, that they use to fly this and all of the airlines other routes, seat 185 people. Not a bad load factor for a first flight.

The inaugural events began at about 12:30pm with a tour of the aircraft to check out Icelandair’s product. From there I went back into the gate where there was a brief meet and greet with some of the airline representatives. 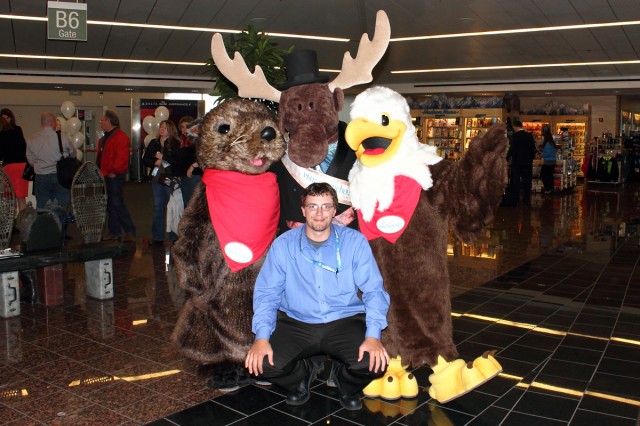 Me and my new friends.

Cake and hot dogs were served in the boarding area while everyone waited to board the aircraft. They even had a small ribbon cutting ceremony and broke out some airport mascots to celebrate with passengers (and me)! Passengers boarded and then the aircraft started its seven hour journey to Iceland.

The airline and airport are hoping for big success with this route and hopefully expand it to year round instead of just seasonal service. ’œOur staff worked for many months with Icelandair, Anchorage International Airport, and the Alaska visitor industry to make this day possible,’ Alaska Department of Commerce, Community and Economic Development Commissioner Susan Bell was quoted as saying. ’œThe new air connections will grow Alaska’s visitor industry, increase European commerce, and strengthen our economy.’ 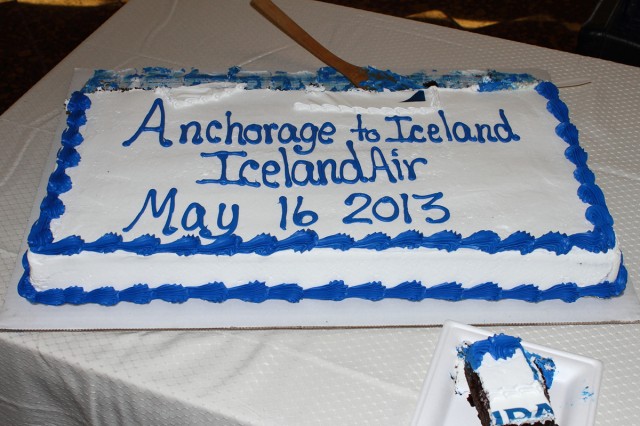 An inaugural celebration would not be complete without cake. Photo by Brandon Farris.

To celebrate their new seasonal service, Icelandair is offering $100 off all flights from Anchorage to Iceland. Passengers wanting to save the $100 simply book online and enter the promo code: ANCHORAGE100. This special offer is valid for travel from May 16th through September 15th and must be booked by May 31, 2013.

The carrier has been flying out of Iceland since 1937 and now flies to 35 destinations in Europe and North America. 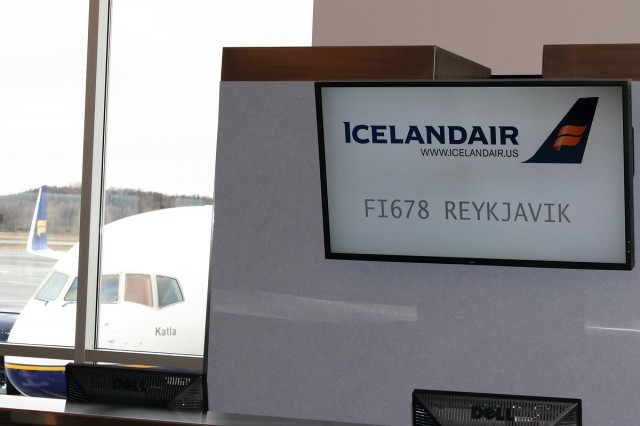 ’œThis year Icelandair celebrates 76 years of aviation and while operating the strongest network in its history,’ said Icelandair CEO Birkir Hólm Gudnason. ’œBy using Keflavik International Airport as our hub, Icelandair is able to afford passengers convenient and economical flights from Alaska to Iceland and a refreshing new option when flying from Alaska to Europe.’

Coverage on Icelandair will continue with a review on flying from Seattle to Iceland on Icelandair and a story on visiting Iceland soon.

Iceland is one of my favorite destinations … and Icelandair is a fine airline. I had a few flights on Surtsey (JFK – KEF and back). The Icelandic language program in the AVOD is fun – that is one hard language, though! Kind of sad that 737s will take over for the 757s, but that’s life.

If you need some ideas of what to do in Iceland, let me know.

Justin, I am curious what there is to do in Iceland. I’ve always wanted to go but have never talked to anybody that went there.

Oh just you wait :). We had another writer, Nick, who just spent a few days in Iceland to report on just this. His story will be coming on the site shortly.

First off, anyone with a user name like yours is alright in my book! I can rattle on at-length, but I’ll keep it short so I don’t hijack this blog. A few top choices:
Thrihnukagigur volcano tour – Only place known in the world where you can tour the empty magma chamber of an extinct volcano.
Glacier tours – Available at many locations. I took one from Skaftafell with Glacier Guides.
Landmannalaugur hike – You just won’t believe the scenery.
Dimmburgir – An old lava field with all sorts of canyons, formations and little lava tubes. Amazing.
Midnaeturhlaup – A fun 10K race through Reykjavik.

And just walk around Reykjavik. It’s a fun place.

Never a hi-jack when providing good information :). Thanks for sharing.

Wow thanks Justin for that info!! Yes I am a HUGE Rush nerd. David, I look forward to the article!! I prefer traveling to lesser known and barely populated places. Iceland has always been one of my picks.

If you are going for most excellent contents
like me, only visit this web site all the time because it provides
feature contents, thanks