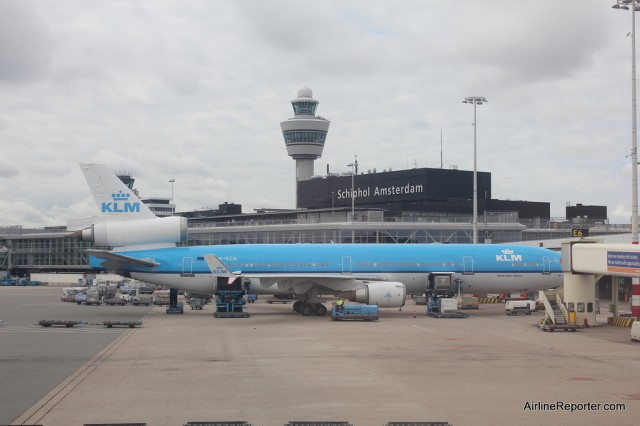 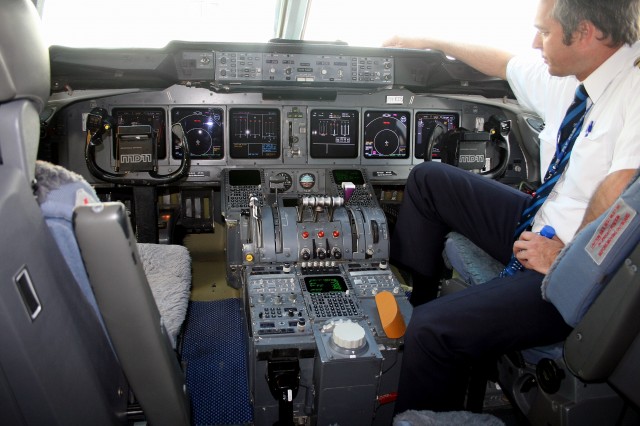 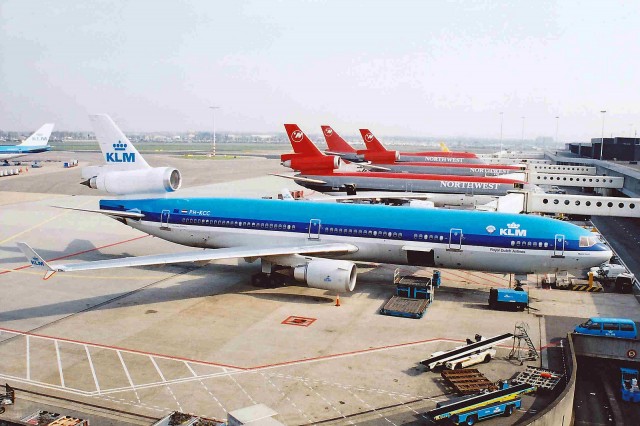 New technological advances had a major impact on what led to the DC-10 Super 60 project, what would eventually become the MD-11.  Boeing’s website best describes what exactly made the MD-11 better than its predecessor.  Specifically it states that the MD-11 has ’œadvances in aerodynamics, propulsion, aircraft systems, cockpit avionics and interior design.’  What does all the mean? Well, a leaner and meaner version of the DC-10.  Here is a summary of the modifications:

If you want to catch a ride on one of these ’œMighty Dogs’ after KLM retires their 9 remaining aircraft, short of buying your own, you’ll have to fly on a charter flight or ship yourself via Fedex, UPS, Eva Cargo or Lufthansa Cargo.

End of an era. Love that plane!

The engines are transposed…

Here you can see the actual pictures of the first MD11 (PH-KCH) leaving Amsterdam for Victorville to be scrapped.
http://md-eleven.net/Latest-News-

Great link Peter. Thanks for sharing!

Do not forget that World Air Ways still flys many US troops on MD-11’s.

They do, but it is not a scheduled service, so much more difficult to get a flight on one in the future.

Ahh, love this plane. A shame I never got a chance to fly on it. I live in a city where KLM sends the MD-11 daily and never get sick of seeing it… I understand why this must be done though.

Well, you still have some time 🙂

I had heard of the impending retirement from Brett over at CrankyFlier so I actually went out of my way to fly on one last year. The Delta reps where confused why anyone would be asking for DEN-CVG-YUL-AMS-MSP-DEN, but it was all for that YUL-AMS leg on the MD-11. I took my little brother as well, but not for the plane, I took him to show him Europe. We sat back near the tail, enjoyed a relatively light load in coach and the great KLM service. It was a great flight and one I’m very glad I managed to fit into my schedule.

I do. I will write myself a note to pull them off my network drive tonight.

Here are the photos of the KLM MD-11 arriving at YUL for my brother and my YUL-AMS flight as well as a picture from my seat at the back of the bus.

Got to fly an MD-11 one time, AA DFW-MIA, took that flight just for the chance to fly that bird…certainly one of the most muscular, handsome planes ever to take the skies…
Sorry to see KLM let them go, but they are old birds and their best days are behind them. RIP MD-11

Am surprised that this airplane is still flying commercially. It may have been a great flying airplane but it was a very poor performer from the start. MD should have committed to a new airplane. They may still be in business if they had.

High fuel costs, but no loan payments. The MD-11’s interiors are out of date and probably makes business sense for KLM to get rid of them.

Sorry to spoil the “lovefest”, but as a former MD11 pilot (1996-2004) I will not be sorry to see it end up in the smelter. This aircraft had a horrible machine-human interface combined with unimpressive flying characteristics. An overall engineering kludge. Reading the “summary of modifications” above, I find it interesting that MD appears proud that hydraulic fuses were included in the MD11. The DC10 should have had them in the first place (the L1011 did), but the Douglas engineers decided that loss of all hydraulic systems was a statistical impossibility (the same geniuses that routed the hydraulic lines in front of the spar). This is the aviation equivalent of Ford’s decision to install fuel tank piercing bolts on the Pinto. But I digress…

One man’s treasure is another’s trash :).

It is good to have multiple perspectives. I am sure most passengers will be happy to see this bird go away, but there is something about those tri-holers.

Were you ever able to fly the DC-10 as well?

No, I never flew the DC10. Although it had some unconscionable design flaws, apparently the DC10 was a nice handling bird according to what I have been told by friends who flew them.

The MD11 was originally certified by the FAA with the DC10 wing and a tiny horizontal stab (tiny compared to the DC10) that was pumped full of fuel in cruise to create an aft CG condition. A system called LSAS was required to overcome the aerodynamic deficiencies of the minuscule horizontal stab. Again, it was a complete kludge. Google “MD11” and “LSAS” to learn more.

Treasure and/or trash? Ironically I made a very nice living for all of those years flying that aircraft. But I’ve got to be honest about it, especially when I read the misty-eyed tributes. The flying public should be glad the MD11 is going away.

BTW, I agree that there is something about tri-holers. Flew the Tri-Star for 4 years. What a magnificent aircraft!

This article inspired me to book the last pax MD-11 flying to North America, KLM 621 from AMS to Montreal. Flying the inaugural UA 787 long-haul IAH-AMS over so it will be a nice comparison. I haven’t been on an MD-11 since 1999 on American. As a passenger, I used to love it!

Talk about an interesting perspective. Flying on the world’s newest airliner to return on one of the oldest still operating.

Want to write a story on the comparison for AR.com 🙂

Interesting! I’ am wondering how much unit cost is saved by investing into a Dc-10 from a MD-11

Sure thing, David. Be glad too! It sure was a pain to book it. ATL is switching to a 777, even though it’s an MD11 at this point. SkyTeam Res thought I was crazy!

Had the great priveledge to fly on KCA,KCD and KCG
Will miss them all when they go – thanks for great long lasting memories
and flights.

We flew KLM MD-11’s many times on the AMS-Nairobi flight – wonderful memories.

Was surprised to find that my first ever flight (Swissair LHR-ZRH) was a stand in MD-11. Good memories and sad to hear this news

I have flown many times on the MD11 route AMS/YVR/AMS using KLM – I found the aircraft comfortable and smooth. My next trip to YVR will be on the B777 so BYE BYE MD11

Its sad to see them go:( I am in flight school and as a child always wanted to someday fly one, but now I know ill never get that dream:'(

I was a passenger on the KLM YUL-AMS route onboard MD11 for many years. These days I’m flying Air France YUL-CDG just to avoid the MD11.
Unfortunately I’ve had my fair share of KLM MD11 breakdowns including a mid-Atlantic engine failure and a couple of times when they couldn’t get the luggage door shut.
In one year I can start to fly with KLM again. I miss Shiphol but I guess anything is better then CDG 🙂

I watch FedEx 463 leave every morning and 308 come back every night. What I see is a classy, under appreciated bird touching down gracefully for the compliments of a bunch of packages. It seems like kind of a shame, really. I have always admired this tri-jet, and am sad to see it retire. To folks like me, it’s not just a jet being retired, but a sign of the end of an era. It’s like losing an old friend.

Many difficult engineering feats were accomplished and regulatory inhibitions were amended because of new standards imposed by this aircraft. The CF6-80c2s or PW4462s being hung on it were (as any new engine can claim) the most fuel-efficient and reliable offered at the time; therefore on oceanic routes, it needed only 3 engines rather than 4.

Maybe it was more evolutionary than revolutionary, but it certainly is a dignified airframe. Maybe outdated cosmetically, but refined aerodynamically. That’s not solely because of the age of the interior, but also a lack of updating. Similarly, any reliability issues are more accurately attributed to improper maintenance than age. The USAF still flies 50-60 year-old aircraft. There are 50+ year-old DC-8s still flying with very high-reliability.

I will climb down from my soap box now, relieved. She flew millions of passengers, grateful or not, to their destinations with a high standard. She will be missed.