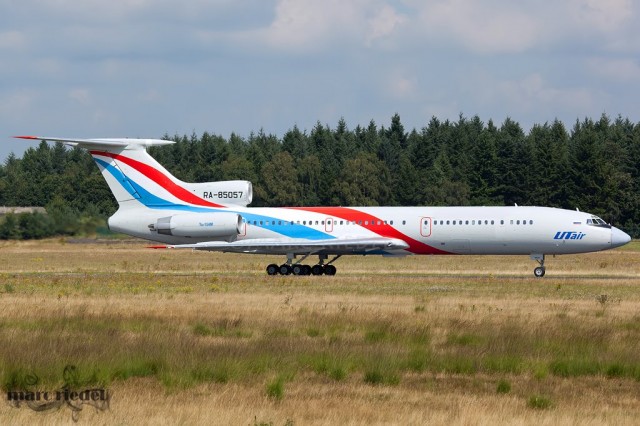 This is a special livery seen on RA-85057. The livery has been with Samara Airlines and then South East Airlines before remaining with UTair.  UTair’s standard livery is not nearly as colorful and a bit bland, so hopefully they keep the red white and blue flying until retiring the aircraft from their fleet.

I’ve always thought the TU-154 was the best looking of the former Soviet Union airliners. It looks like a “grown up” version of the Dassault Falcon.

Great plane with an awesome livery.

I remember flying on one of these from Beijing to Xian. The guide was apologetic since the tour promised only western aircraft. It was a different experience, kind of like flying on a bus. Not only did your seat recline but it also folded flat in the forward direction. That way if you were on an empty flight you could fold it forward and put your feet up.

This plane was painted in this special livery to serve as a VIP-plane for the Samara Region Administration which later leased the plane to South-East Airlines. Nobody knows whether it was further leased or sold to UTair.

The livery is great – it bears the colours of Samara flag (so a bit different stripe order from the Russian flag). But it also had Samara Region coat of arms on the vertical tail amid the white stripe.