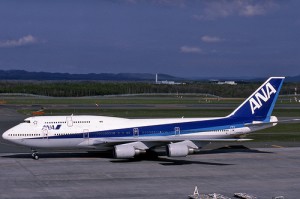 Starting on March 1st, All Nippon Airways (ANA) will have women-only lavatories on their international planes (except the Boeing 737 or Airbus A320). These lavatories will be restricted to only female passengers and will have a pink logo on the doors.

Only under certain circumstances will male passengers be able to use the lavatories:

* When required for safety reasons, just prior to the seat belt sign being turned on during take-off and landing

* When there are very few female passengers and the women-only designation has been lifted for the flight. If this is the case, an in-flight announcement will be made.

I don’t want to go into too many details on why this might be a good idea, but a man using the restroom and turbulence could cause issues. Also women wouldn’t have to worry about putting down the seat.

Of course previously ANA has advised passengers to use the restroom before even boarding the plane to save on fuel and carbon emissions.

This makes little sense. An aeroplane lavatory is just that a single solitary lavatory. Only one person can use it at a time – restricting its use to just women makes little sense at all – plus when they mean a personal emergency warrants use then only would they allow men to use the toilet? This is laughable – imagine having to restrain yourself on a 4 hour flight…

“plus when they mean a personal emergency warrants use then only would they allow men to use the toilet? This is laughable — imagine having to restrain yourself on a 4 hour flight…”

Wrong. There is toilets available for men. There is only a few selected toilets for pure female use. I guess they think women dont pee on the seats. This is not the case. Some women do hover or stand on the seat to pee and get it on their shoes. Not mentioning a mis-guided tampon extraction that lands bloody side down on the seat, ewwww.