This story was written by Chris Sloan and originally was published on Airchive.com. This is the next of a multi-part series talking about the Boeing 737 factory in Renton. Read the first part: A Historical Look at Boeing’s 737 Factory in Renton and second part: Inside Boeing’s 737 Renton Factory and the Successful Next Gen.

The Boeing 737 Goes Into ’œMAX’ Overdrive

The Boeing 737 NextGen order book continued to bulge, growing virtually unabated even through the deep worldwide economic slowdown / crisis of 2008-12. Ironically, this era of financial strife and sharply escalating fuel costs, as well as the growth of emerging markets, helped 737 and A320 sales go from strength to strength. Boeing however didn’t stand on it its laurels or did it?

Boeing claims with the introduction of its latest performance improvement package ’œPIP’, today’s NGs are 6-7 more efficient then when they were first introduced in the late 1990s. Boeing’s Tinseth points out that ’œThe (737) program has taken off with record sales. It’s simple. We make it better every time. We were first in its class with ETOPS 180, glass cockpits, Sky Interiors, and high bypass engines. We lower the operating costs through such new technologies as blended winglets, heads up display, carbon brakes, and more fuel-efficient engines. We enhance customer appeal with the new Sky Interior. This is an airplane that appeals to the heart of the market: emerging and developing economies and it is very successful with the LCC business model’. These new LCC airlines in emerging markets include Lion Air, Air Asia, and Gol! An unintended benefit of the weak economy, particularly in the U.S., is the poor financial results led to an elderly, fuel-in-efficient, maintenance intensive fleet which created an advantage and some say a bubble for airframe manufacturers, particularly in this sweet smart of the market. ’œThe significant driver in the US is the demand to replace older and less efficient aircraft’, said Tinseth.

This story was written by Chris Sloan and originally was published on Airchive.com. This is the next of a multi-part series talking about the Boeing 737 factory in Renton. Read the first part: A Historical Look at Boeing’s 737 Factory in Renton.

In 1988, the first serious competitor to the 737 monopoly, the Airbus A320 entered service. With even more advanced systems like fly-by-wire flight controls, new higher powered and fuel efficient engines, a wider cabin, the first major use of composite materials in a narrow body airliner, and somewhat larger capacity on a direct model comparison basis, the A320 family quickly became a force to be reckoned with. In addition, Airbus offered aggressive pricing and quicker delivery windows. Having only recently launched the 2nd generation 737s, Boeing didn’t respond to the European framer’s challenge for another 5 years.

In 1993, Boeing finally answered with the Boeing 737 Next Generation. First flying in 1997, it first entered service in 1998 as a 737-700 (comparable in size to the 737-300) for launch customer Southwest. While retaining commonality with the 2nd generation 737s, the NextGens included a redesigned wing, and eventually winglets, that increased total fuel capacity by 30% and range to over 3,000 miles. Quieter, more powerful and more fuel-efficient engines in the form of CFM56-7Bs came online as well. 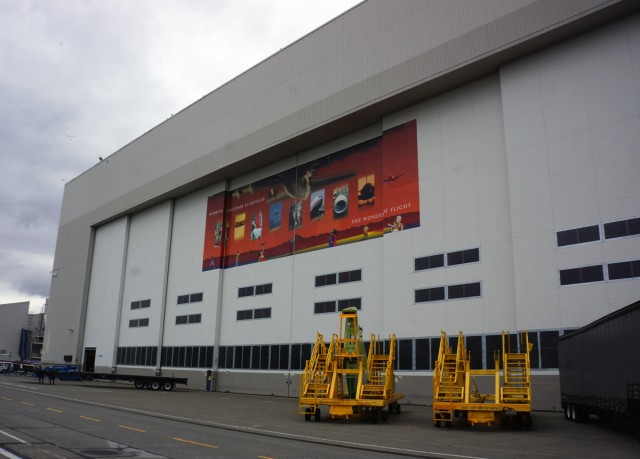 On the evening of March 18, 2013 Boeing’s Renton Plant rolled out its first Boeing 737, a 737-800 bound for Panamanian Airline COPA, at the astounding new production rate of 38 aircraft per month. Boeing had only reached 35 airplanes per month, its previous historic high commercial production rate in January 2012. 2 days later on March 20, 2013, Boeing delivered the 7500th 737, the 7,229nd example built at Renton (more on this later). By Spring 2014, the rate is expected to leap to 42 aircraft per month.

In 2015, Renton will begin production of the new 737 MAX that is due to enter commercial service in 2017, 50 years after the 737 first entered service in 1967! The Boeing 737 is the best-selling and longest continuously produced commercial airliner of all time with over 10,500 deliveries and orders. As of April, 2013 between the new Max (1,234) and current the Next-Generation (4,395), the 737 backlog stands at 3,136 aircraft. With the increased production rates, the current order book will take 6 ½ years alone to clear. Boeing’s current market outlook estimates 23,000 new narrow body airliner orders in the 737 / A320 families category over the next 20 years. Three draw dropping data-points stand out: