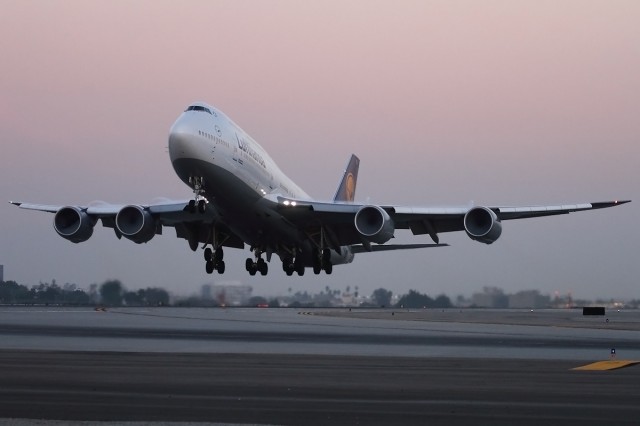 â€œThe selection of Los Angeles for our new flagship aircraft demonstrates the marketâ€™s critical importance for Lufthansa, which has had a presence in Southern California since 1960,â€ said Juergen Siebenrock, Vice President, The Americas for Lufthansa. â€œThe FRA-LAX route connects the worldâ€™s two largest and most influential consumer markets for entertainment products- Hollywood and Germany. LAX is also an active gateway for pharmaceutical, IT, automotive industry and defense contractor industries, all of which are important customer segments for Lufthansa.â€

When I arrived at LAX, you could tell that there was excitement in the air. At the LH ticket counter there was a gigantic sunrise colored Boeing 747-8I model. Standing next to the model were some people from Boeing. TheyÂ joked and gave me a hard time about my LH A380 tag on myÂ bag from the A380 launch last year at San Francisco — oh well. 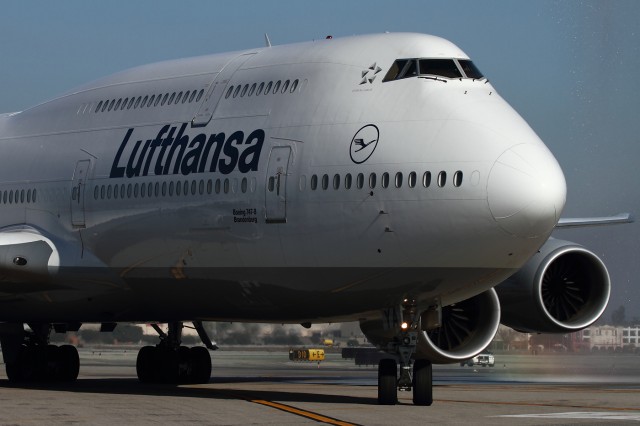 As soon as stepping outside, we all looked up and noticed that the 748 was on downwind to land and at around 13:10 PST she touched down in LAX for the first time. Applause broke out from all of the VIP’s on hand while other members of the media clicked away asÂ D-ABYA, named “Brandenburg,” threw her reverse thrusters on and came quickly to a halt. As she taxied to the gate, the LAX fire department completed a water canon salute and after parking at the gate, we headed back inside to listen to some of the invited guests speak. 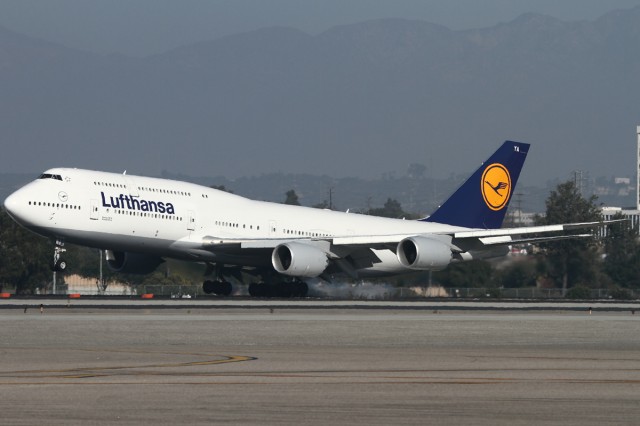 â€œWe integrated our customers very closely into the development of our new Business Class so we would be able to offer a product that was totally in line with their wishes and requirements,â€ said Jens Bischof, member of the Lufthansa German Airlines Board.

The aircraft generates a 30% smaller noise footprint that the 747-400 and brings double digit improvements in fuel efficiency and CO2 emissions per passenger. This makes it one of the industryâ€™s most fuel-efficient aircraft and key to Lufthansaâ€™s commitments to sustainable reduction of carbon emissions. The 747-8I fuselage is 253ft 2in long which is 18ft 4in longer than the 747-400. This allows LH to carry 26% more cargo volume.

I recently received an invite to head to Germany for about 24 hours before turning around and taking the first passenger flightÂ on-boardÂ the Boeing 747-8 Intercontinental. How could I refuse?

I will be leaving Seattle (SEA) on aÂ LufthansaÂ Airbus A330 non-stop to Frankfurt (FRA) before grabbing a seat on the inaugural flight from Frankfurt to Washington DC (IAD) on flight LH416.Â You better believe I will be sharing this experience as much as I can. Follow onÂ TwitterÂ and of courseÂ on the blog.

This is exciting for a number of different reasons. One of which is I haveÂ alreadyÂ taken a ride on one of Lufthansa’s Airbus A380s and I look forward to comparing that experience to the Intercontinental flight.Â It won’t be that easy, since the 747-8I is debuting Lufthansa’s new business class product, where the A380 I flew had their older product. 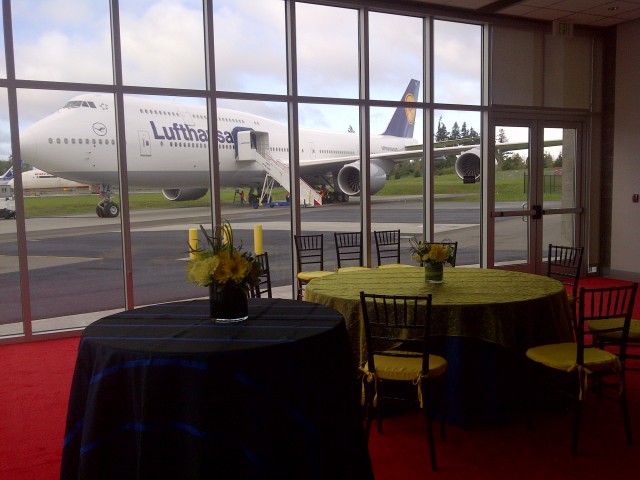 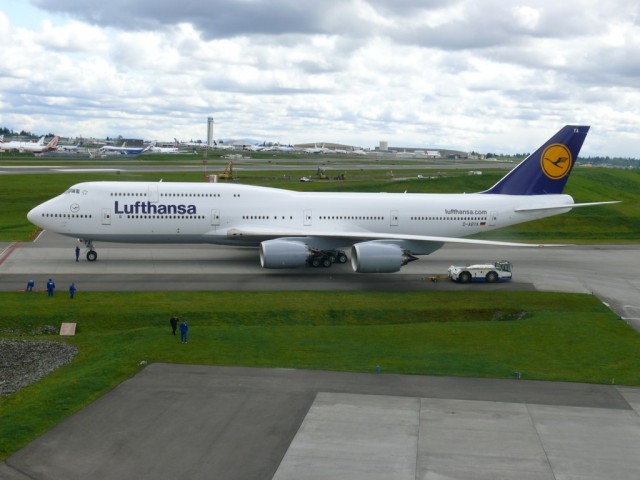 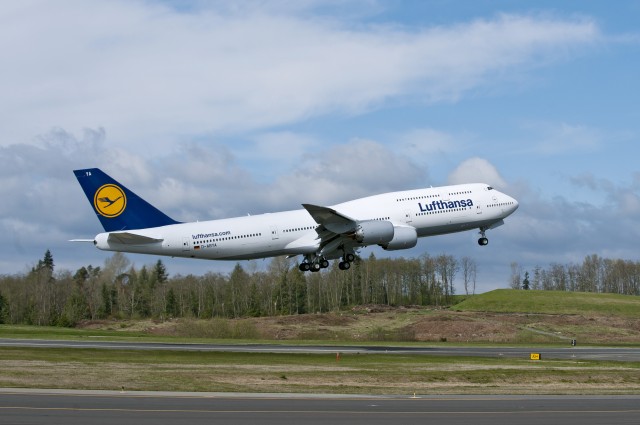 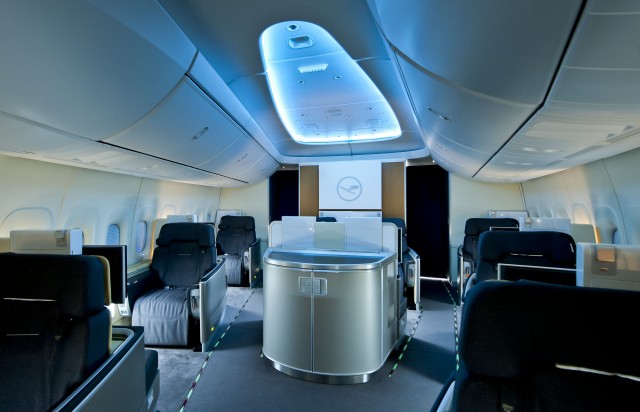 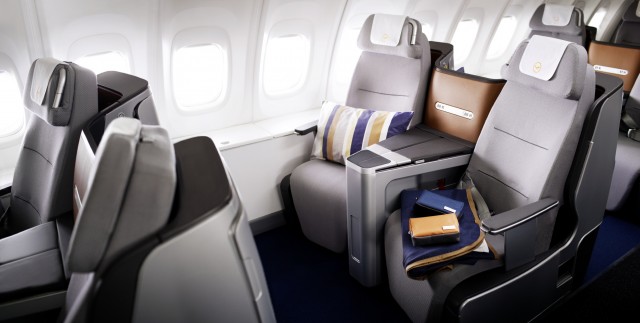 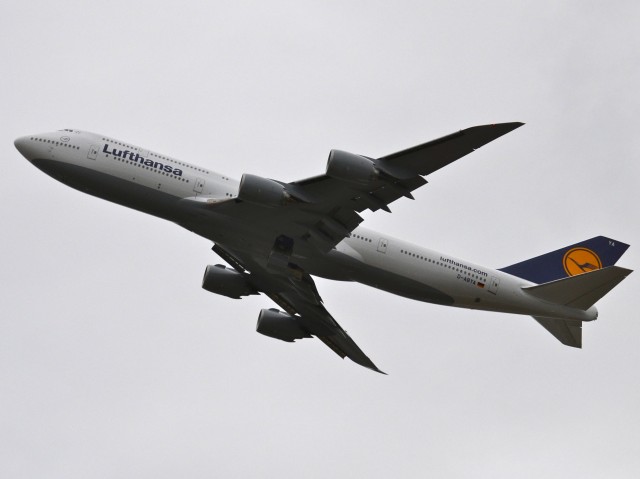 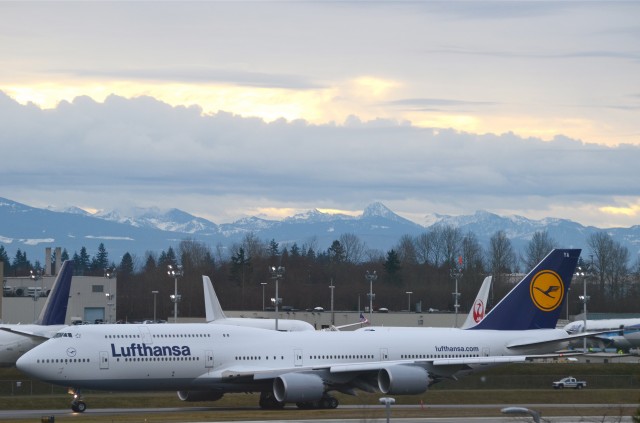