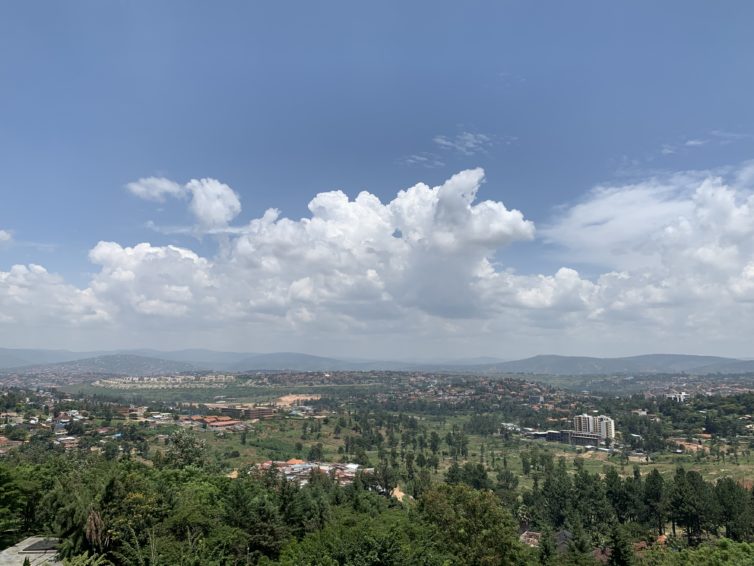 Part of the Kigali seen from the roof of Rwanda’s Parliament building (which you can visit!). – Photo: Matthew Chasmar

This February, I had the incredible opportunity to spend about 10 days visiting the East African country of Rwanda. Indeed, you may have already seen my previous story for AirlineReporter about my flights to and from the country. But what I wasn’t able to do in that story was talk about my impressions of Rwanda itself. As someone who had never travelled to Africa before, I immensely enjoyed my trip to Rwanda and would highly recommend visiting to someone curious about the region.

I spent most of my time in Kigali, Rwanda’s capital, and biggest city. Kigali left an interesting impression on me because it felt very much like a city of contrasts. Some neighborhoods (like those around government buildings and foreign embassies) have a lot of new development. I saw impressive glass office buildings, luxury hotels, new apartments, and shopping malls. 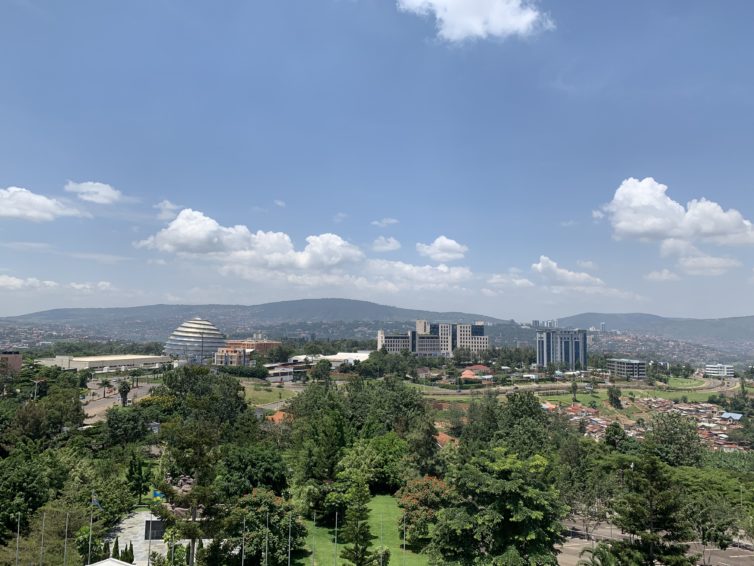 The dome on the left is the Kigali Convention Centre, a brand-new building that lights up at night. Next to it is a Radisson Blu Hotel. – Photo: Matthew Chasmar 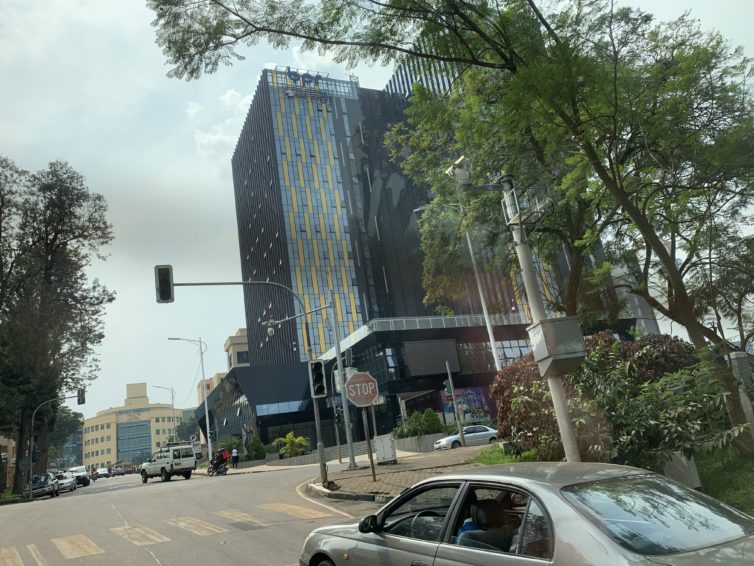 The Alliance Tower, one of the most impressive buildings in Kigali’s Central Business District – Photo: Matthew Chasmar

That said, other parts of the city show that many Rwandans don’t enjoy these luxuries. On my first day there I had the chance to take a walking tour of Kigali’s Nyamirambo neighborhood, run by the Nyamirambo Women’s Center, a local charity. This was a great way to see what seemed to be a more typical Kigali neighborhood. 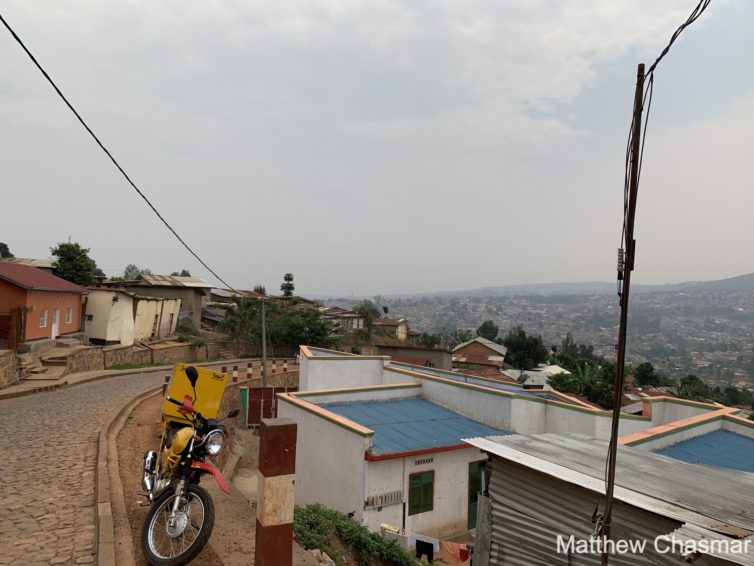 The view down a street in Niyamirambo. – Photo: Matthew Chasmar

Overall, I didn’t spend that much time walking around the city, but I always felt safe when I did do so. Kigali is also an exceptionally clean city, in part because plastic bags have been banned in Rwanda, eliminating a major source of garbage. There is also a monthly national holiday known as Umuganda when all Rwandans are required to help clean up their communities. 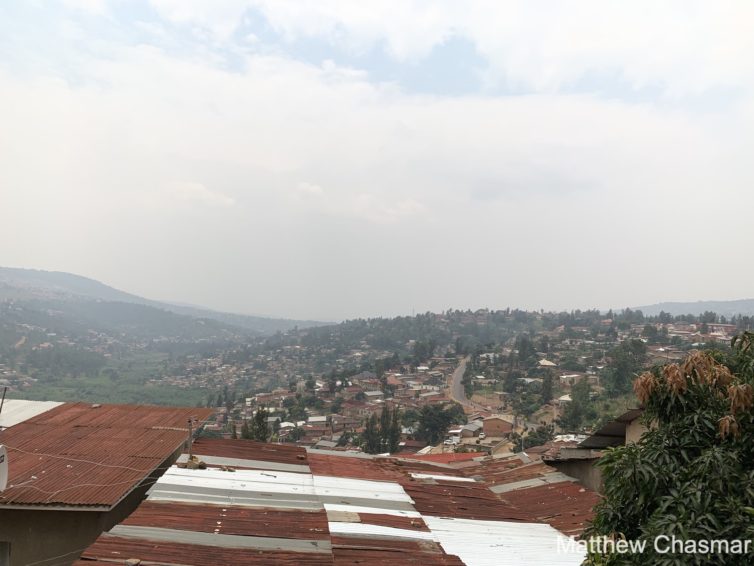 The view from Nyamirambo over part of the city. – Photo: Matthew Chasmar

There are Milk Bars

When I was on the Nyamirambo walking tour, our strangest stop was at the local milk bar. Yes, you read that right. The Rwandan government actually subsidizes a chain of milk bars as a means of giving the people inexpensive access to dairy. Anyone can walk in and buy a glass of milk for a low price. If I remember right, I was given the option of pasteurized or unpasteurized milk. I had the former, which was served in a large mug (and I do mean large – it took several people to finish the serving). It definitely didn’t taste like the milk I’m used to. It was much less sweet and I think had a much higher fat content, almost tasting like cream. 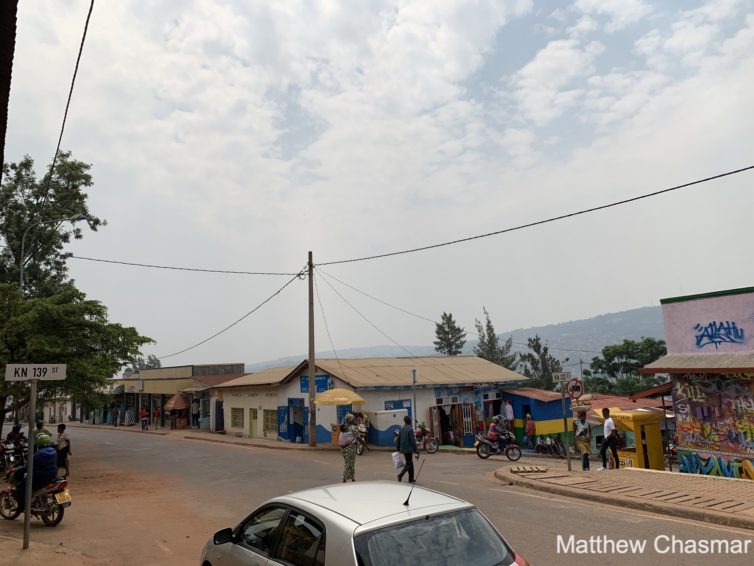 The building in the middle (across the intersection) is the milk bar, run by Rwanda’s Nyanza Milk Industries Ltd. – Photo: Matthew Chasmar

Driving around Kigali and the country, I saw these milk bars all over the place. I don’t know of anywhere else in the world where you could find this.

I stayed at the GoodNews Guesthouse in Kigali, which was a small guest house-style hotel in Kigali. I was impressed ’“ the food was reliable and good, the staff were kind and helpful, and the grounds were incredibly beautiful. 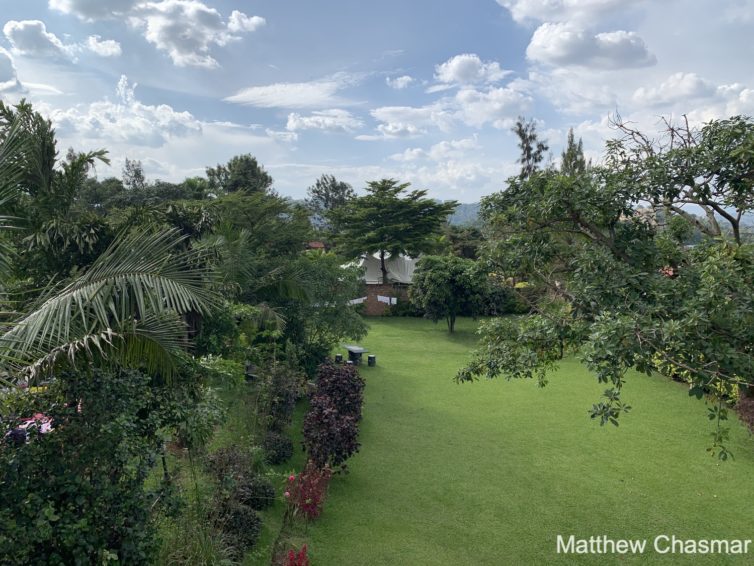 Part of the GoodNews Guest House grounds. Lush, beautiful, and home to many birds (that like to make loud noises early in the morning) – Photo: Matthew Chasmar

As for Rwandan food, I’m not quite sure how to describe it. Lots of cooked vegetables, beef, and potatoes. Drinks-wise, it felt like every restaurant I went to had Fanta in abundance. Always either lime or orange flavor, and always bottled in glass bottles. Very refreshing. I also recommend trying out the local beers (Primus and Skol) if that’s your kind of thing.

BONUS: Rwandair gets their first Boeing 737 and their own beer 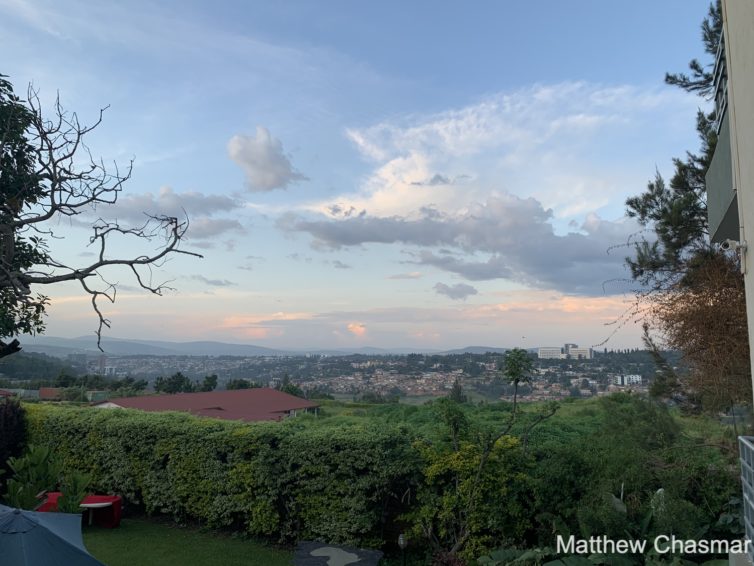 The view over Kigali at sunset from the hotel. – Photo: Matthew Chasmar

Learning the Emotional History of Rwanda

I’m a believer in learning the history of places you visit. In the Rwandan case, I think it would be remiss to visit the country without learning the history of the horrific 1994 genocide against the Tutsi. Of the memorials that I visited, the Kigali Genocide Museum is likely the most comprehensive, and I’d recommend this one to a visitor with only a limited knowledge of what happened. Elsewhere in Kigali I there are the Campaign Against Genocide Museum, Belgian Peacekeepers Memorial, and Rwandan Art Museum. The latter of these, interestingly, hosts the wreckage of the Dassault Falcon 50 carrying the Rwandan President that was shot down at the beginning of the genocide. Outside Kigali, I visited the Nyamata, Ntarama and Murambi genocide memorials. 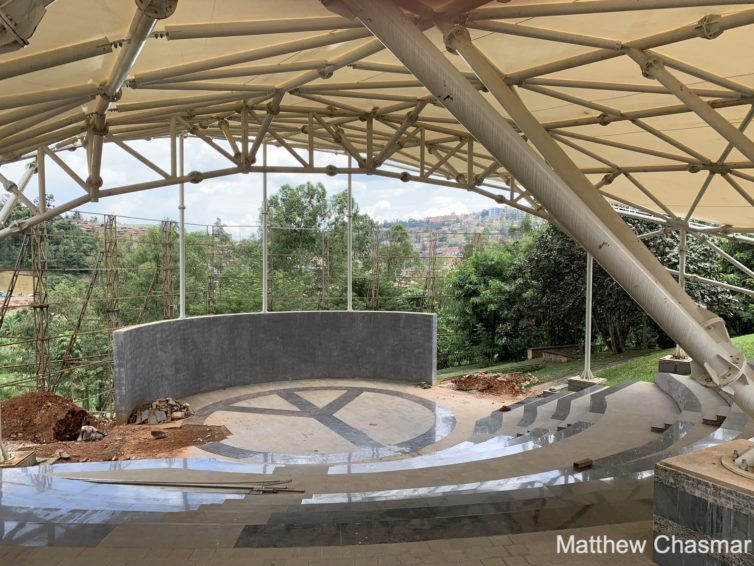 This peace sign ampitheatre is at the Kigali Genocide Memorial. – Photo: Matthew Chasmar

Anyone thinking of visiting these memorials should note that they are, without a doubt, emotionally heavy. And remember to always behave in a respectful manner. It’s just a no-brainer.

Land of a Thousand Hills

I also very much recommend getting out of Kigali to see more of the country. The Rwandan landscape is lush, green, and incredibly beautiful. In fact, often reminded me of Hawaii. Rwanda is a very hilly country, a fact that one begins to appreciate after several hours of only seeing rolling hills. It’s not a large country either, so even a day trip of only a few hours outside Kigali can show you a lot. 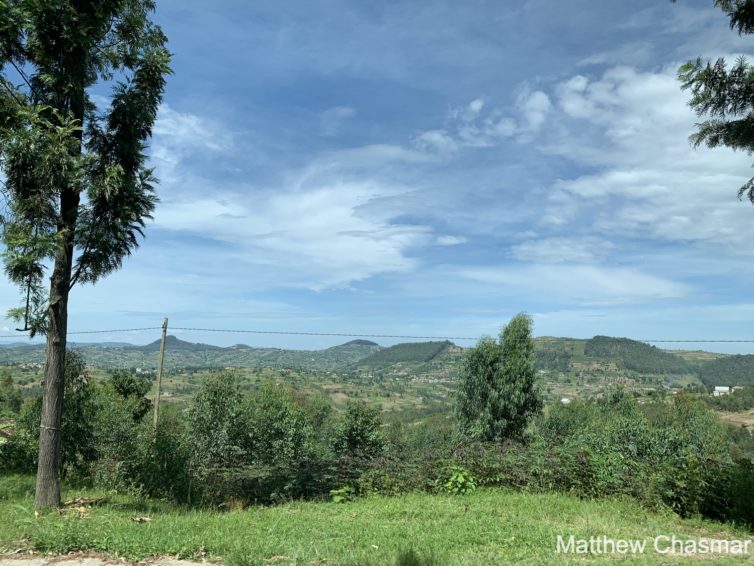 In terms of getting around, Rwanda’s road network is undergoing a massive upgrade, and a lot of the time I found myself on brand new roads. In fact, often the roads there were in better condition than Canadian roads (where I live), even many hours away from Kigali. Interestingly, many vehicles (including the bus I was traveling on) are installed with speed limiters that prevent them from going over 60 km/h (about 40mph). But wherever you’re going, you’re likely to have an amazing view on the way there. 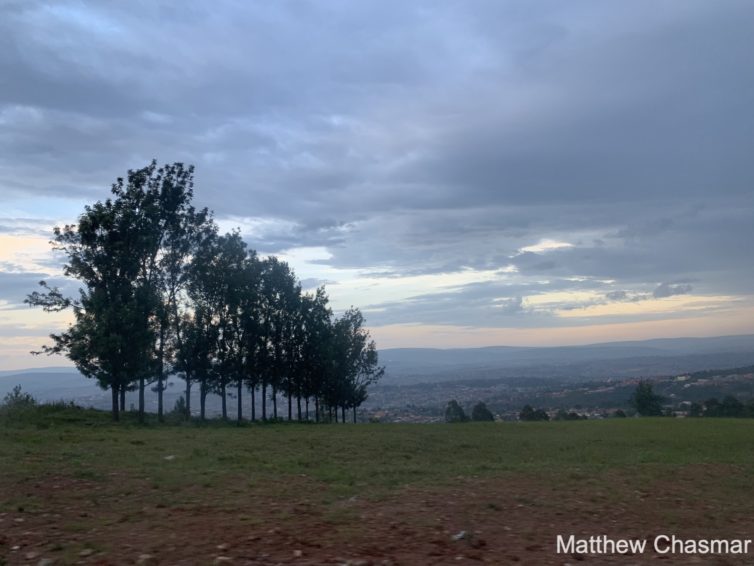 Near the end of my trip I had the chance to visit Akagera National Park near Rwanda’s eastern border. This required a drive of a few hours outside Kigali to the town of Kayonza, where I stayed the night at the Kayonza Eco-Lodge. The Eco-Lodge is part of a Women’s Opportunity Center in Kayonza that supports entrepreneurship and learning. It is also entirely off-the-grid, with solar power, rainwater recycling and other measures. 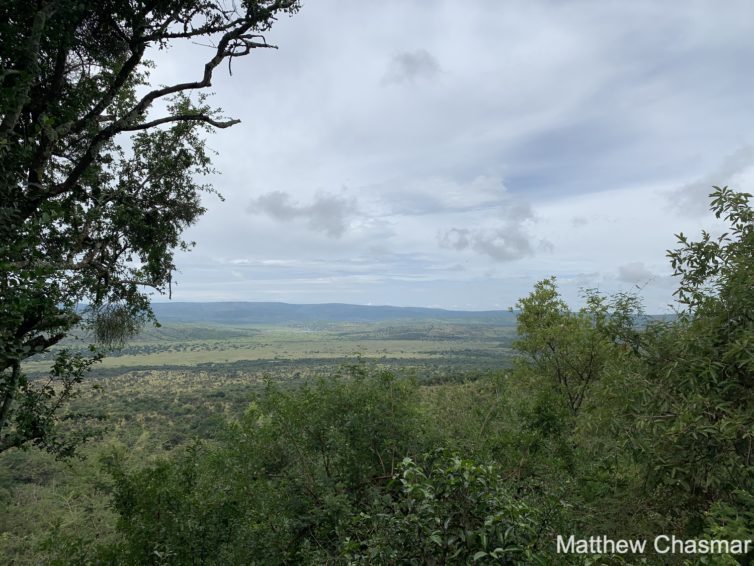 The next morning, I was up before sunrise for the additional hour or so of driving to Akagera itself. There I went on a safari followed by a behind-the-scenes tour of some park operations. The safari was incredible, and I saw elephants, a leopard, baboons, zebras and all sort of African wildlife in the wild for the first time. 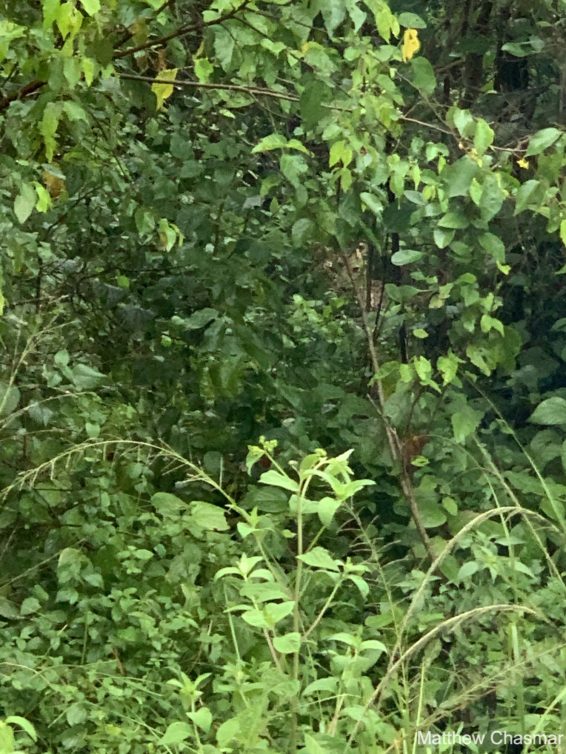 If you look closely, there’s a Leopard in there. Photo: Matthew Chasmar 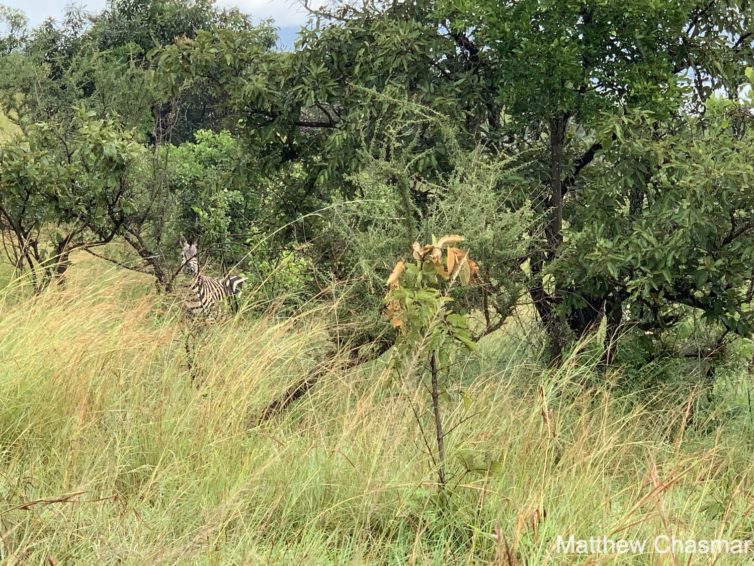 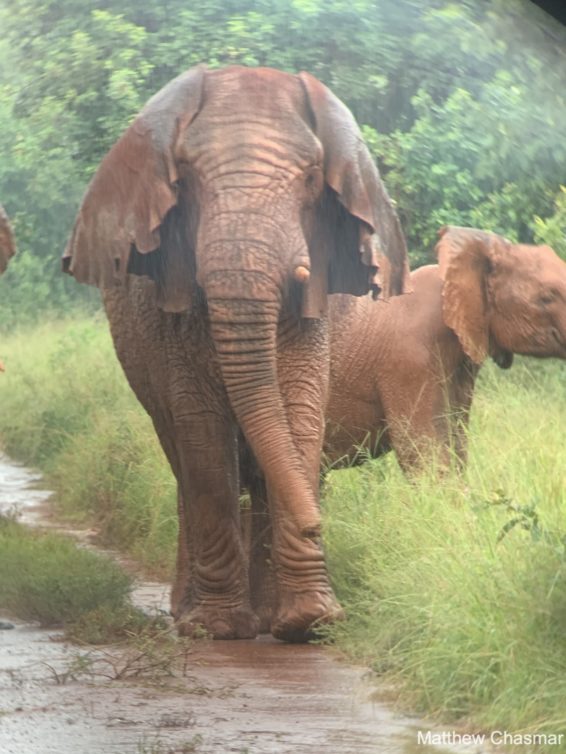 Seeing the behind-the-scenes of the park, and the efforts the park rangers put in to protecting the animals (especially the rhinos) from poachers is really quite something. During the 1990s Akagera’s rhino population was wiped out by poachers, but today the park has been revitalized and animals reintroduced. Today, park rangers can track the rhinos almost in real time. It reminded me a little of the control room in Jurassic Park (but where things don’t go horribly wrong). Rangers even have their own airfield and helicopter to respond to any intrusion quickly (this was, sadly, not part of my tour). 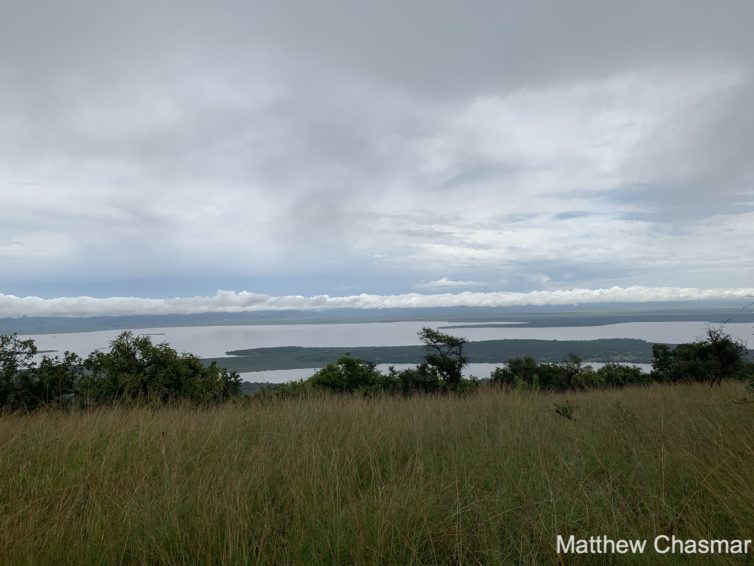 It was occasionally overcast and raining that day, but no less beautiful. – Photo: Matthew Chasmar

Finally, I want to cover four housekeeping things that anyone traveling to Rwanda should know:

Not long ago, I would probably have never imagined myself visiting Rwanda, but now I have and on that count, I have no regrets. Seeing Rwanda was immensely eye-opening. While saying this may sound trite, it really seemed like one of those once-in-a-lifetime experiences. 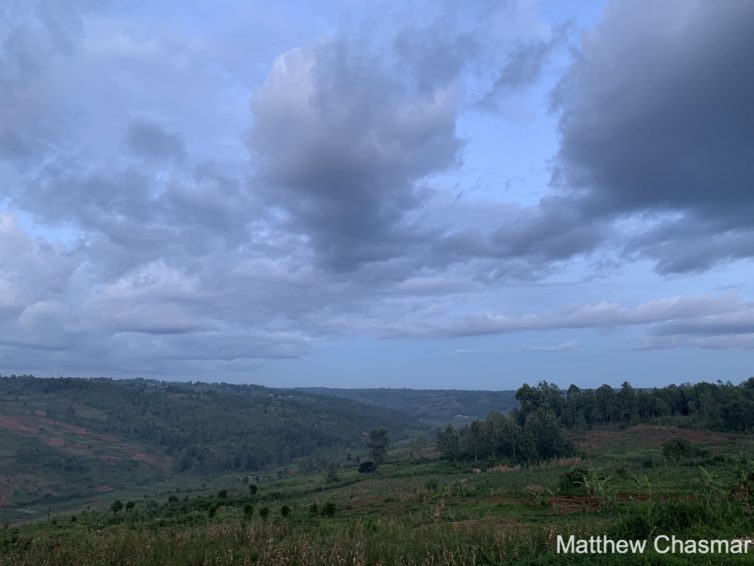