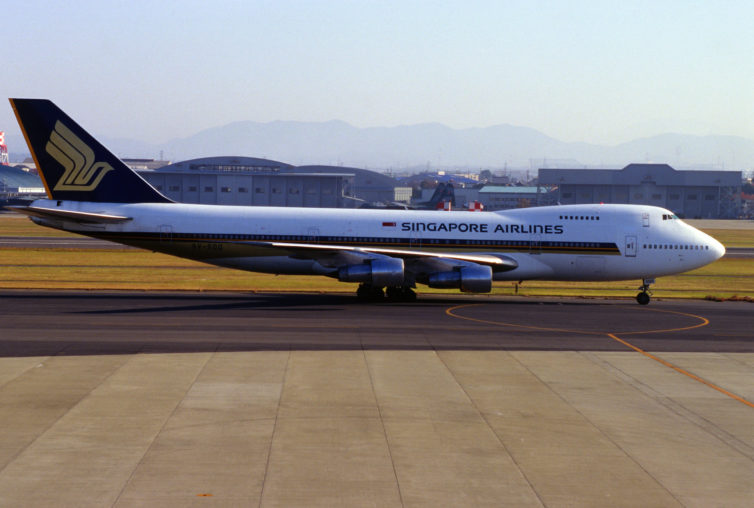 Madison was Line Number 471 and was born at Boeing’s factory in Everett, WA (where every 747 has been built). She first flew on September 11, 1980 and was quickly delivered to Singapore Airlines on September 25th with registration 9V-SQQ. She served Singapore well for about 12.5 years before being wet-leased to Garuda Indonesia Airlines in April of 1994.

BONUS CONTENT: One of the last airworthy Boeing 747-200s heads to storage 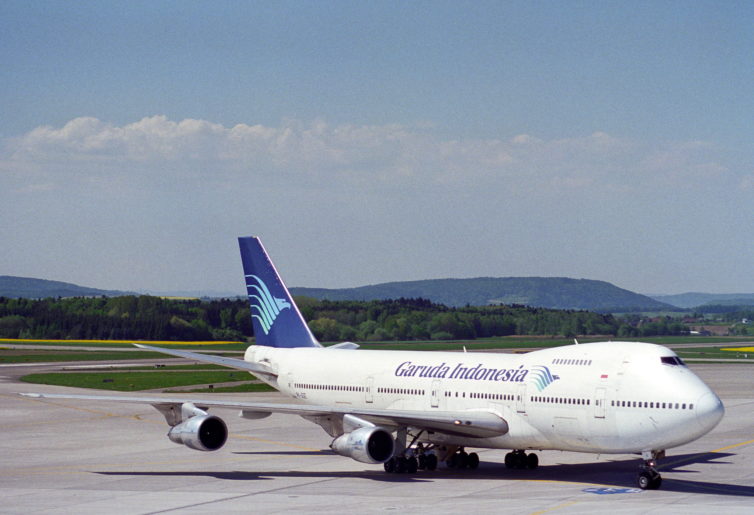 This is not our gal Madison (it is reg PK-GSE), but this is how she looked in full Garuda livery. She kept the reg 9V-SQQ during her time with Garuda. – Photo: Aero Icarus | FlickrCC

She was not the only 747 that Singapore Airline leased to Garuda. While she ended up with a full Garuda paint scheme, others had interesting combination liveries (and I always love those).

In May of 1996, Garuda returned Madison to Singapore Airlines and she was stored. Then in July of the same year, she was sold to Northwest Airlines. 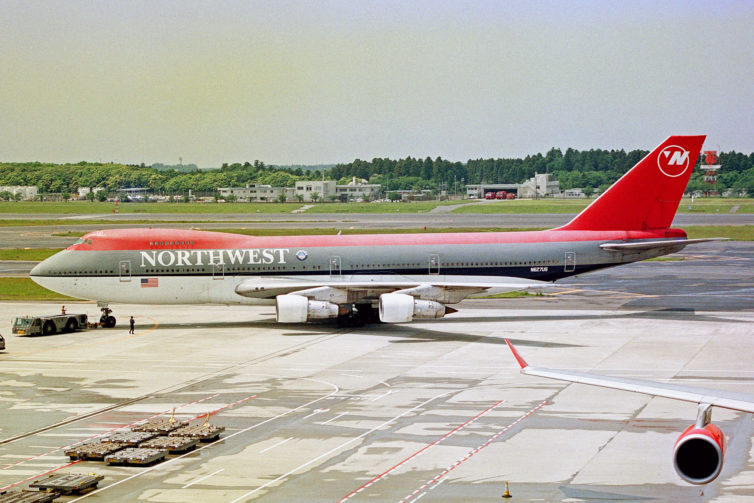 Madison strutting her strut fairings in Amsterdam in 2002 (pretty proud of that one) – Photo: Ken Fielding

Madison was painted in the “Bowling Shoe” Northwest livery, which I have always loved. The previous livery never made sense to me since it has a big blue cheat line that never makes it to the nose of the airplane. I liked the look of the last NWA livery (which Madison never wore), but it always bothered me (like a lot) that its tail and body had the “compass” pointing to the Northeast on the starboard side. 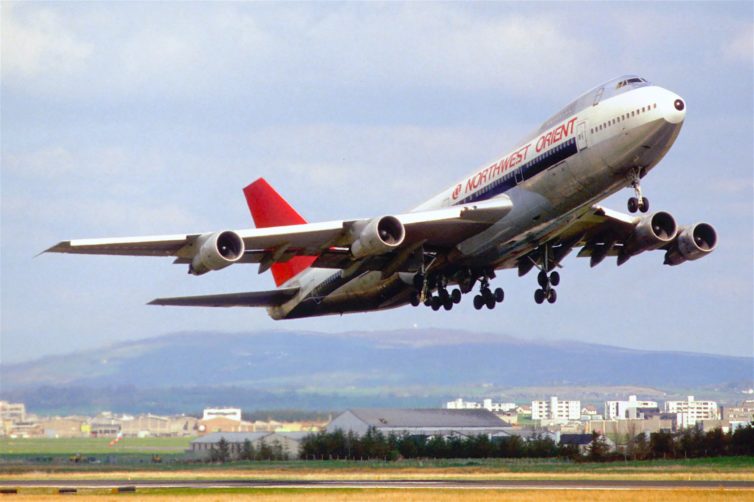 Did they run out of blue paint? They want to keep that front door white? WHY?! – Photo: Aero Icarus | FlickrCC 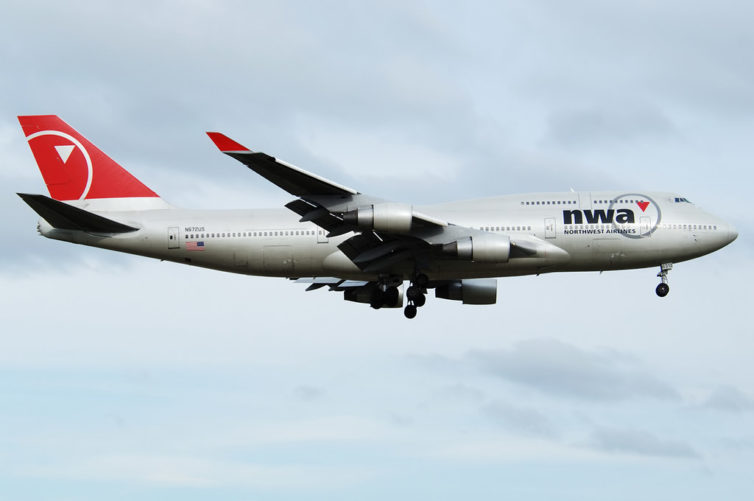 This bothers me more than the cheat line. Your compass is broken and points to the Northeast yo – Photo: Andrew W. Sieber | FlickrCC

Our lovey 747-200 flew for Northwest for just over eight years before she was retired to the Arizona desert. When a plane goes to the desert, things normally do not get better from there. Would she live out her days in the sun; slowly die from being parted out; be destroyed and recycled; or be put into cargo service for a few more hard lived years before inevitably still ending up back in the desert? Luckily, none of the above for our Madison!

BONUS CONTENT: A look at flagship aircraft for US airlines

She sat waiting for her destiny in the hot sun for three years before she was bought by Evergreen Aircraft Sales & Leasing. In December of 2007 she had a little (okay maybe big) nose job,Â  and her complete front section (Section 41) was carefully removed and shipped to the Tokyo Museum of Aeronautical Sciences, where she still lives today. 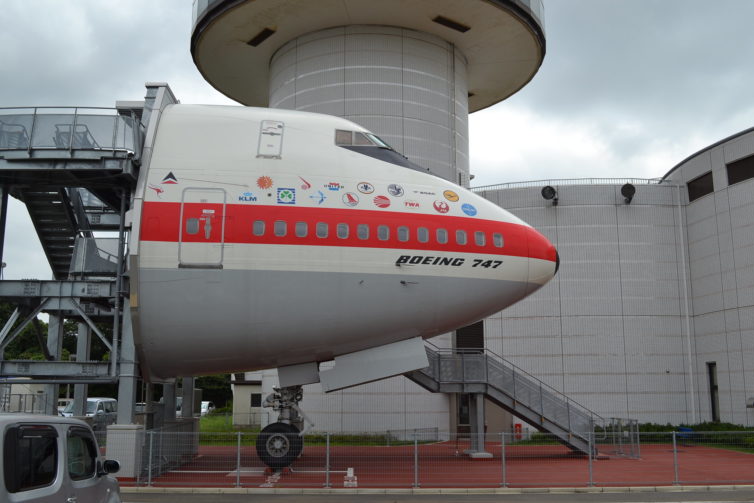 She was painted in the colors of the first Boeing 747-100, and is a much-loved exhibit at the museum. You can even see the classic Northwest logo right in the middle, above the 8th and 9th windows. How cool, right?

Madison will live on and give happiness to those who visit her for many years to come. And when the museum is ready to sell her, there might be a crazy AvGeek out there (like me) who will want to buy her and bring her home. Although I might have a hard time getting HOA and (more importantly) wife approval!

I want to give a huge thanks to my pal Ken Fielding, who not only has a lot ofÂ amazing airline photos on Flickr, but for also providing so much detail about their history. He always inspires me to learn more about the aircraft that I love so much!Â

I appreciate all the work it must take to establish the history of your chosen aircraft. I look forward to your next work of project.

Thanks Michael glad you enjoy it! I would ask if you had any requests, but I have to sort of get that “love and feeling” from an airplane to want to really dig into their past and then of course finding of interest to share.

“Plane was built, served its life with one airline, and then was destroyed for scrap metal,” just isn’t as exciting :).

Thank you David for yet another great article. If I may add to your comments with regards to Ken Fielding, I remember him well from my days in corporate travel and when he was with British Caledonian in Manchester UK. Ken is an amazing fountain of knowledge and his database must be amongst the best “private” ones in existence. Thank you Ken.

Glad you like the story, and yes Ken is awesome! Not only does he have such a great collection of photos, and he takes such take in detailing the information about the planes. Not to mention that I have been lucky enough to hang out with him a few times and he is such a kind and awesome guy. I know he reads the blog and he will likely catch your comment :)!

I spent a lot of time flying between Amsterdam and Detroit/Minneapolis for various US based projects back in the late 90’s early 2000’s. Many of those trips were on NWA 747s and one of those projects was based in Madison. I even got an upgrade to first on one flight and sat upstairs.

David, what a nice tribute to the wonderful machines we fly. I spent 25 years with Delta flying lots of great aircraft but never a 747. I had the privilege of flying as engineer on DC-8 and re-engined DC-8 with CFM-56â€™s. But have to say my favorite was the reliable old Mad Dog MD-88. Hope youâ€™ll have an opportunity to track one down and tell us a tantalizing story of young crews, multiple leg days and control cable flying. Really enjoy your writing

I loved flying on the Mad Dogs myself. I grew up flying on RenoAir from Seattle to Reno and loved the 2-3 seating and they just looked cool. Now that more and more are retired, there should be some out there with interesting stories to tell!

I really enjoyed this article. Brought back memories of my first and second flight on the NW 747-200. Northwest always seemed to be on strike. It was the summer of 1978. I lived in Portland, Oregon. My grandmother passed away – lived on a farm outside of Miles City, Mt. Nearest airfield was Billings. Luck would have it that Northwest was on strike, as they always seemed to be. It was two days before the funeral that I found out I needed to make a quick trip and they were running a single flight a day, a 747; Portland, Spokane, Billings and Minneapolis. My only choice was a seat first class. I got the nose seat coming and going….so cool to experience that!! Both flights had the oldest flight attendants I ever saw….it must have had something to do with seniority list. Kind, they were. Matronly they were. Told me about the upstairs…..you are kidding me – an upstairs??? I didn’t notice the plane while I was waiting to board…just that there were lots and lots of people and where were they all going to sit? I checked out the upstairs in the short time I could be out of my seat. I had a Roy Rodgers upstairs flying to Spokane! Another drink upstairs flying to Great Falls! Typically each summer since the early 60’s my family would fly to Billings and then sometimes either our grandparents met us or we would take the Northern Pacific train on to Miles City for a ride 70 miles out to a wheat farm for the 3 months of summer. Once the 727’s came online that’s what we flew. Nice quiet plane as the engines were in the rear…lots of take off power and fun very steep landings. We were landing in towns in or by the Rocky Mountains so it was steep takeoff and steep landings. Typically Northwest few the 727 from Portland to Spokane to Helena then Butte or Bozeman and finally Billings before continuing on to Minneapolis. At the time, no advanced seat assignments. The gate attendant had a long sheet of pull off seat assignment stickers for each seat on the plane and would pull off our seat sticker and attach to our hand written, multiple copy tickets. My mom hated the smoking section….so we always arrive way early to get bulkhead seats.

Thanks for sharing… and wow! I couldn’t imagine doing such short flights on a 747… especially into Spokane and Billings. That would be a sight to see.

So glad to see this pic. Started my career with northwest orient in 1988 and recently retired. Flew the 747s extensively out of Detroit Honolulu and San Francisco bases. Those were great times.

Comment*i also wanted to know which aircraft i flew when i was 5 years old from paramaribo to Amsterdam back in the 70 tees. I want to know the EXACT type and color of the plane to buy a model with stand for iT. ( iT could be….KLM 747- 200. Boeing 747- 200 northwest airline????? And so on. Maybe i can ASK/buy classic documents of data somewere? In that month and figger out which one iT coud be. Thanks!!