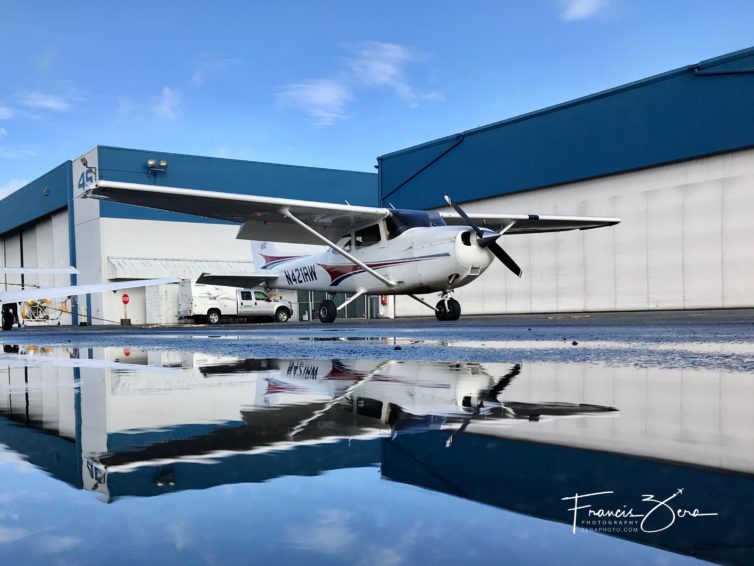 March 20 marked the one-year anniversary of my having started flight training; my first ground-school class was already more than 12 months ago.

Progress has been sporadic, mostly due to a particularly bad winter with consistent low clouds that precluded flying and resulted in dozens of cancelled training flights. On the upside, now that spring is here, Iâ€™ve started to make progress again, although COVID-19 holds the potential for future disruptions. Our governor here in Washington state was kind enough to declare flight training to be among the exempted activities during the lockdown (at least for now).

Since my last post, Iâ€™ve completed both my day and night cross-country flights with my instructor, have been working a lot on navigation and flight planning, and now have returned to practicing basic maneuvers to kick off the rust from a winterâ€™s worth of very little flying. 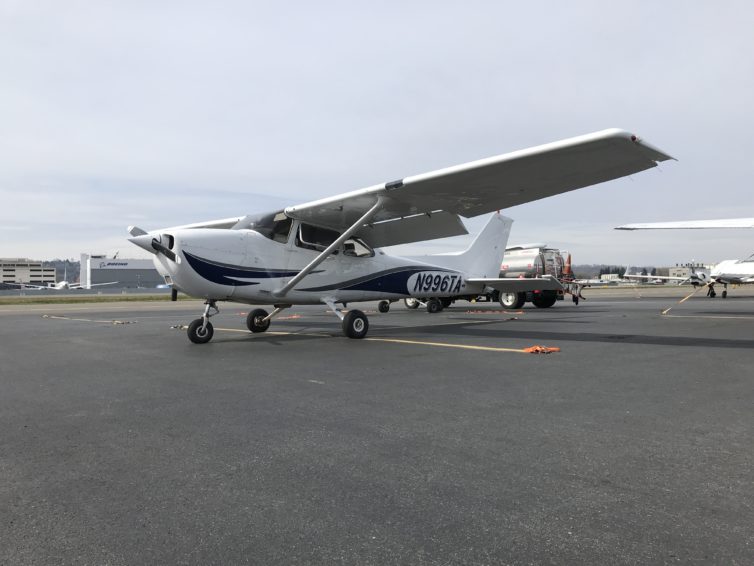 OK, I’ll start taking more photos of us actually flying instead of only posting ramp shots; when I’m having a lesson, though, my thoughts are on flying more than taking photos

The cross-country flights were wonderful. Iâ€™d done all the flight planning in advance to the selected airports (night, we went to Chehalis, Wash., which is a bit south of Olympia; day, we went to Port Angeles, on the Olympic Peninsula), and we flew per the plans after briefing them thoroughly. In true instructor form, my CFI warned me heâ€™d toss in a surprise diversion, so, soon after takeoff on the return leg of the day cross country he declared that we had to make a diversion to Jefferson County Airport (known colloquially as Jeffco). That procedure is to basically figure out where you are currently, where the diversion airport is located, then plot a new course to that airport, keeping on top of checklists, airspace, getting the weather at the new airport, finding appropriate radio frequencies, etc., all in a limited amount of time. It was big fun. We did a touch-and-go at Jeffco, and then flew the planned flight profile back to BFI.

One recent lesson was a bit frustrating; I remembered all the procedures, but the muscle memory just wasnâ€™t there. My landings in the pattern also werenâ€™t very consistent, nor very smooth. More frequent practice has already started to remedy that.

Once all this comes back together, itâ€™ll be time for the stage two check ride with a different Galvin instructor; if I succeed in that, all thatâ€™ll be left is my solo cross-country and practicing for the final FAA check ride.

Last weekend, I did my first pattern solo since early December. It was wonderful. Everything clicked, even though I called it good after only about 30 minutes due to some squirrelly crosswinds that I didnâ€™t care for. 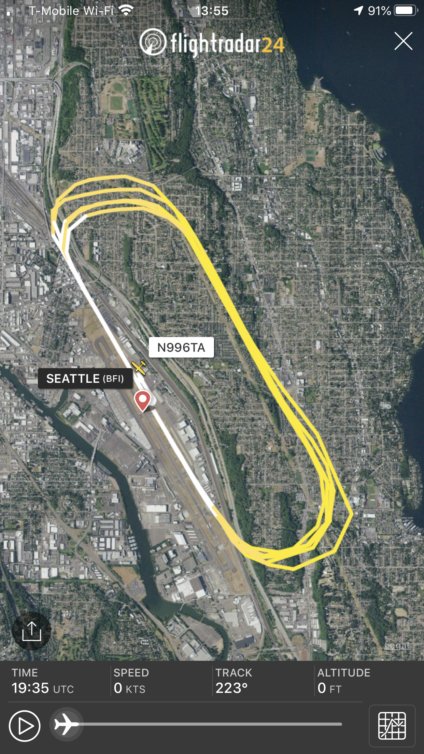 Last weekend’s pattern solo, recorded via the magic of ADS-B 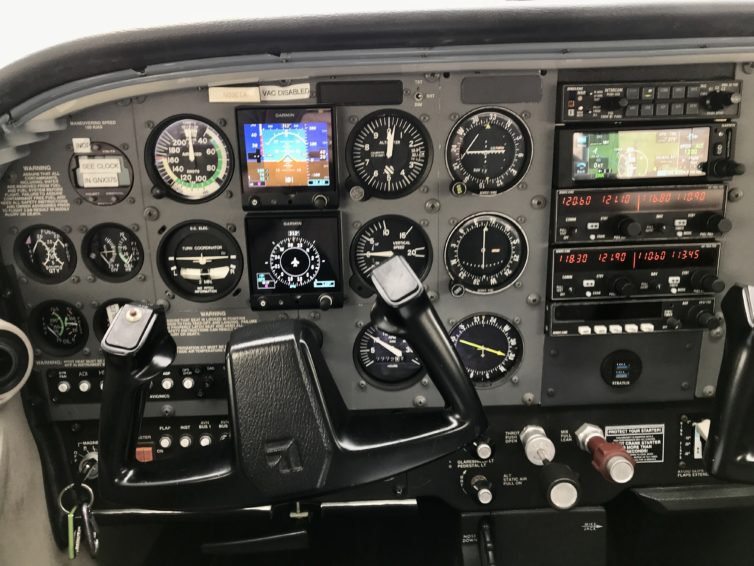 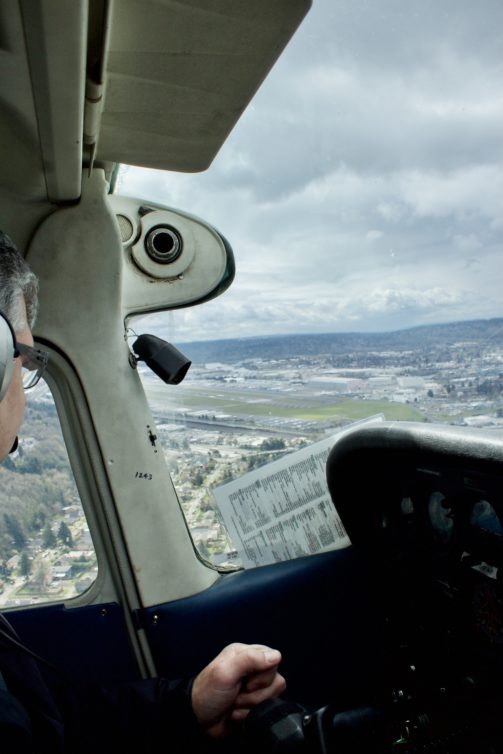 Yours truly, on the base leg to 14L at BFI. Photo by Carl Sanman

Next up will be another practice cross-country flight with my CFI up to Sequim Valley (W28 for those into looking up the airports by the IATA code) on the north end of the Olympic Peninsula. Iâ€™m getting pretty good at filling out the manual flight-planning forms; Carl (my instructor) isnâ€™t into letting me use ForeFlight or similar electronic tools for planning; those are simple enough to learn, but heâ€™s preparing me for eventuality of either an iPad failure or, far more likely, the FAA inspector simply taking it away from me in flight and asking me what happens now. The logic is that, if Iâ€™m not using electronics for flight planning and navigation, thereâ€™s nothing battery-powered that can fail. Plus, even if I were to use the electronics, I’ve got a paper backup.

http://www.zeraphoto.com
Plane Talking with Mom – AirlineReporterâ€™s Inaugural Podcast
Farewell Old Girl? Is the Sun Setting on the QANTAS Boeing 747, Thanks to Covid-19?
1 Comment

Fun to read about your quest to become a “CERTIFICATED AIRMEN”……
I would like to point out that one may not purchase a pilot’s license in the United States……. one may earn the coveted “certificate” and thus be certificated as a Private Pilot, Single Engine Land.
Once you earn your certification, it is good for life, what needs to been done throughout your life to utilize the privileges of the certification is CURRENCY…… for carrying passengers, day-night, a flight review every 24 calendar months…medical, ETC, ETC. Again, once you earn your certificate it is good for life……. the issue will be currency…
Airman’s Certificate is a certificate issued to persons qualifying for it by the Federal Aviation Administration (FAA) Airmen Certification Branch… unlike a liquor license, which one can buy and then pay over and over again to keep the liquor license…….