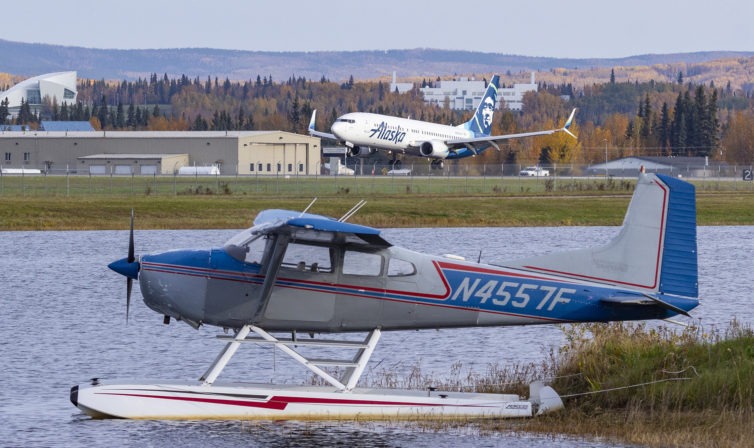 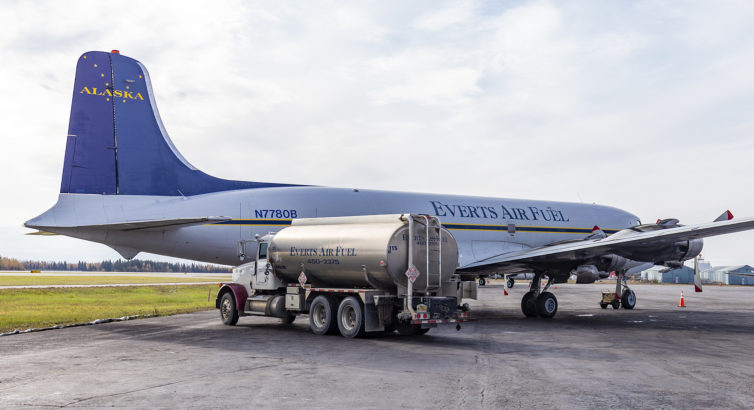 Fairbanks (FAI) is pretty centered in the state of Alaska – Image: GCMap.com

Fairbanks (FAI) is more or less in the center of Alaska, and the airport there serves as a gateway to much of the interior. There are good paved roads running south to Anchorage (360 miles), and southeast to the rest of North America (2,000ish miles to Vancouver or Calgary), but surface transportation throughout the state is limited, with vast expanses accessible only by air. While there’s no shortage of passenger and cargo operators ferrying tourists and freight, there’s a large number of residents whose link between home and the rest of the world is aviation.

FAI sees mainline passenger traffic from Alaska Air, American, Delta, United, and Condor, though schedules and options are highly seasonal. Non-stop flights are available from many of the hubs and focus cities of the aforementioned carriers, though many visitors fly or cruise into Anchorage and make the trip to Fairbanks by rail or automobile. If you’re looking for something different, PenAir is currently flying ANC-FAI with a Saab 2000 (the only other North American operator of the type is Meregrass / Wildcat Touring). If you’re planning to visit, keep in mind tourist season in Alaska is mid-May through mid-September, and typical vacation activity options dwindle very quickly outside of that window. We opted to visit at the very tail end so we could catch fall colors and northern lights.

Fairbanks International is divided into two main sections. The west ramp is home to the main passenger terminal, and the larger carriers outsiders are probably more familiar with: Alaska Air, Everts Air, FedEx, PenAir, and Ravn. The main runway, 2L/20R is adjacent and handles most of the west ramp’s traffic. The east ramp is home to the smaller charter operators and general aviation, and is nearer to the remaining trio of runways. 2R/20L is asphalt and is most heavily used by general aviation traffic on the east side; 2W/20W is the very-cool-to-this-avgeek water runway, and the smallest, 2/20 provides a gravel or ski surface, depending on the season. 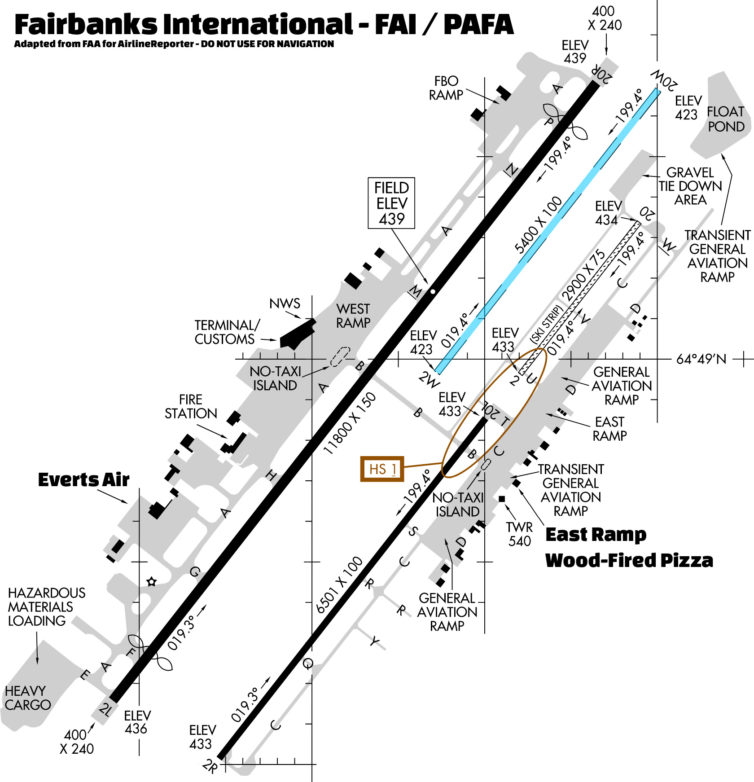 Views from the East Ramp

During my visit in September 2019, my wife and I spent the morning hanging around the east ramp, between the gravel strip and the water runway – my goal was to document an Alaska Air 737 arriving on 20R behind a floatplane. The barbwire fence separating the semi-public east ramp from the west ramp was disappointing from a photography perspective, but otherwise it was a great spot to spend a morning watching aircraft. Coverage from the various flight tracking apps was pretty reliable for most of the commercial passenger airline flights, and somewhat hit-or-miss for everything else, not unlike any other major airport in the US, I suppose. On this morning all of the traffic I observed were using the 20s.

Photo tip: as many an aspiring aviation photographer has learned, the biggest no-no when shooting prop aircraft is using a quick shutter speed that freezes everything, including the blades. The trade-off for dragging the shutter (taking a photo with a longer exposure) is that it greatly increases the odds of getting blurry images. It’s always stressful rolling the dice with aircraft you might not ever get to shoot again, but the dynamic results of a nice prop disk and blurred background make it a worthwhile gamble. These images were all shot at 1/125 of a second, give or take, with an image stabilized lens. 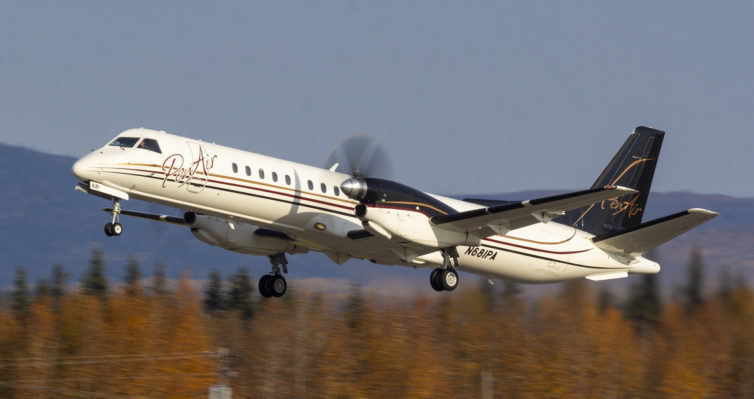 PenAir Saab 2000 departing 20R. PenAir and Meregrass / Wildcat Touring are the only North American operators of this type. 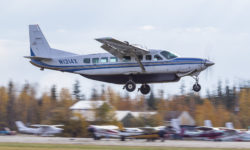 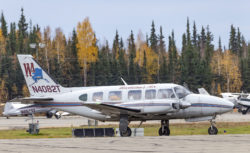 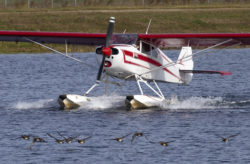 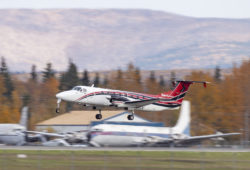 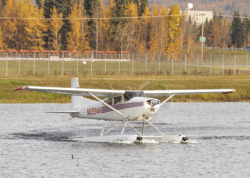 There was a pretty nice variety of airlines and aircraft to observe – smaller aircraft don’t usually hold my attention as well as larger airliners, but I was in high cotton that morning. The east ramp had a stunning number of aircraft – with cooperative light, a productive photographer could add quite a few new tail numbers to their preferred aviation photo site. In addition to the aircraft included in the gallery above, we also caught glimpses of a few nice biz-jets (clearing customs here is quick and easy, we’re told), a NASA research jet, and untold dozens of other general aviation aircraft. 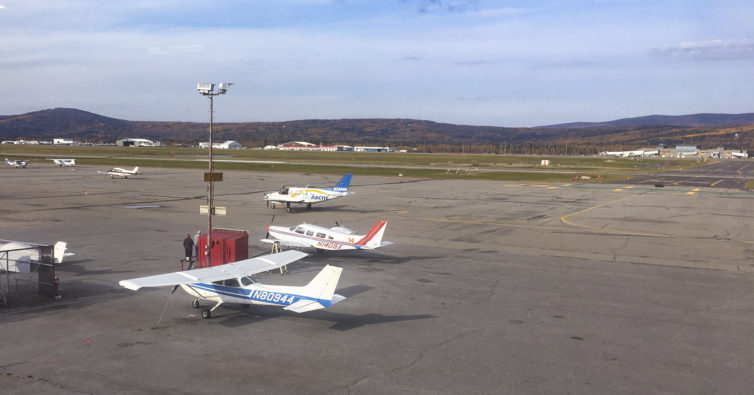 A great view of FAI from your table. The whole field is visible there, this image contains the southern half.

A local enthusiast gave us a heads up on an excellent restaurant, East Ramp Wood-Fired Pizza. To be clear, this is not part of the main passenger terminal on the west side, this is on the east side adjacent to the general aviation ramp (I’ve modified the FAA airport diagram above to include the location). On the day we were there, there were a handful of tourists, but most of the patrons were locals. Located above a hangar, large windows provide great elevated views of the field, and there was a ready supply of binoculars hanging on the wall for customer use. Beyond the avgeek amenities, the food and service were also top-notch. I can’t recommend it highly enough – we had a wonderful lunch there.

Fairbanks is probably best known in aviation circles for being the headquarters of Everts Air, whose fleet of DC-6, C-46 cargo, and fuel tanker aircraft have been attracting attention from enthusiasts for years. The primary base for maintenance, charters, and administration are located here, though they operate more flights out of Anchorage. Their facility at Fairbanks is also home to what is has to be America’s northern-most boneyard, where numerous DC-6, C-46, DC-9, and others await restoration to service or getting parted out. They’re very friendly to enthusiasts – even if unable to arrange a tour ahead of time, it’s worth a stop for their gift shop.

As such, the Everts operational structure looks like this: 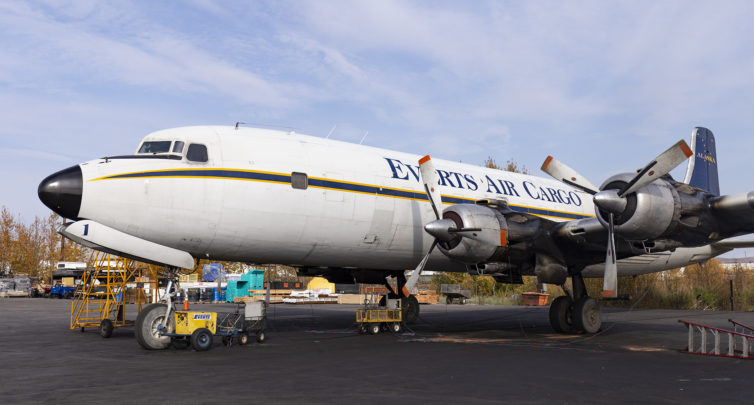 A few notes on this particular DC-6:

“Everts Air Cargo DC-6B N151 is nearing the end of its service life and has been acquired by The Museum of Aviation History at Sola Airport in Stavanger, Norway. N151 flew for the Norwegian airline Braathens-SAFE as LN-SUB in the 1960’s and will be put on static display at the museum in period Braathens-SAFE colors. The aircraft is being retired by Everts Air Cargo because the airline operates in accordance with 14 CFR Part 121, which requires inspections at regular airframe time intervals. During its tenure with Everts, the aircraft has undergone regular A-,B- and C-Checks but it’s approaching a very extensive and expensive D-Check. The last Alaskan operator to perform a D-Check on a DC-6 was Northern Air Cargo about 15-20 years ago and it cost in excess of $1M. Normal operation procedure since then has been to retire a DC-6 approaching a D-check or convert it to a fuel hauler, which operate under 14 CFR Part 125. Everts Air Fuel aircraft are meticulously maintained but are not required to undergo D-checks, which require the aircraft to be almost completely disassembled.”

There are numerous sources out there derived from the FAA Register with fleet information (search for Arctic One LLC and Tatonduk Outfitters LTD), however timely information on which aircraft are active is somewhat difficult to track down. As such, I’ve done my best to assemble a list of the active fleet – consisting of aircraft that have made flights in 2019 or Q1 of 2020. Corrections, comments and updates are welcome! 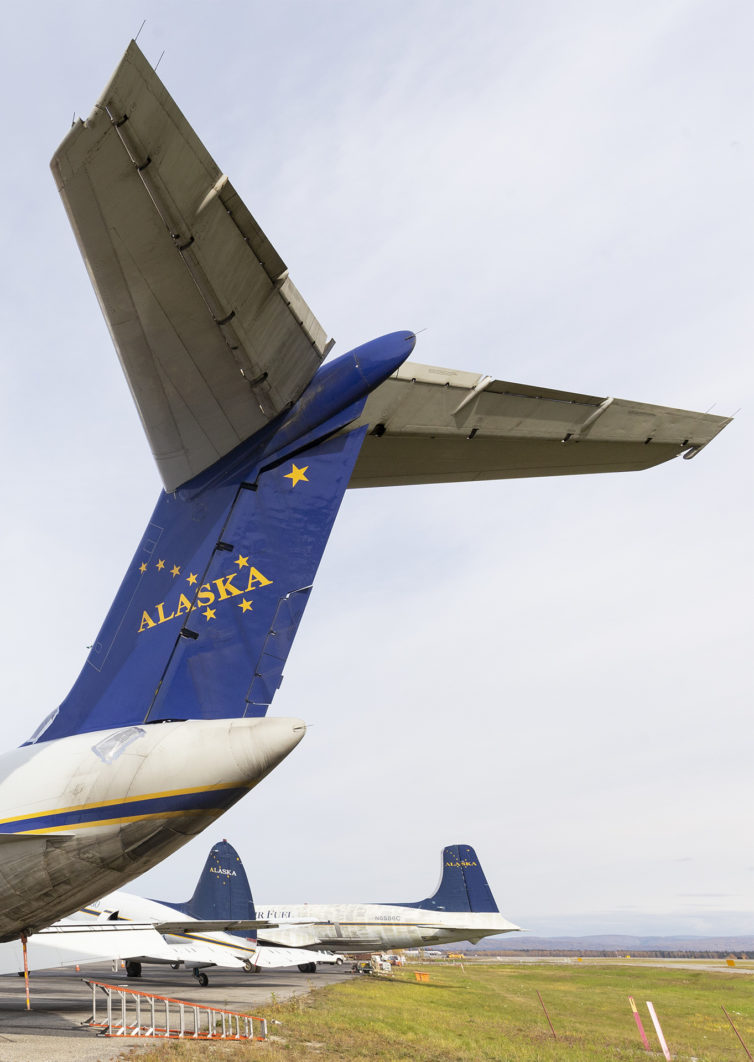 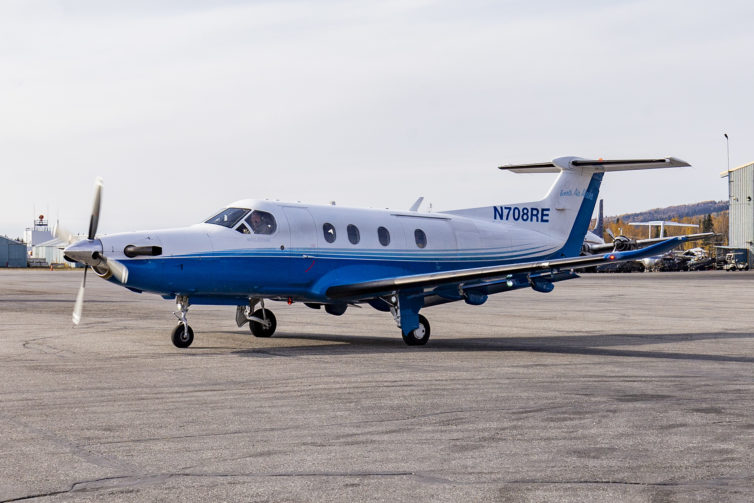 We were graciously given a tour of Everts Air from their Quality Manager, Scott Murdock. After a quick safety briefing, waiver-signing, and introduction, we took a nice walk around the compound, and got an opportunity to see and hear about the equipment and the services they provide to Alaska. We started on the ramp, where we became acquainted with several beautiful DC-6s and a pair of C-46s. 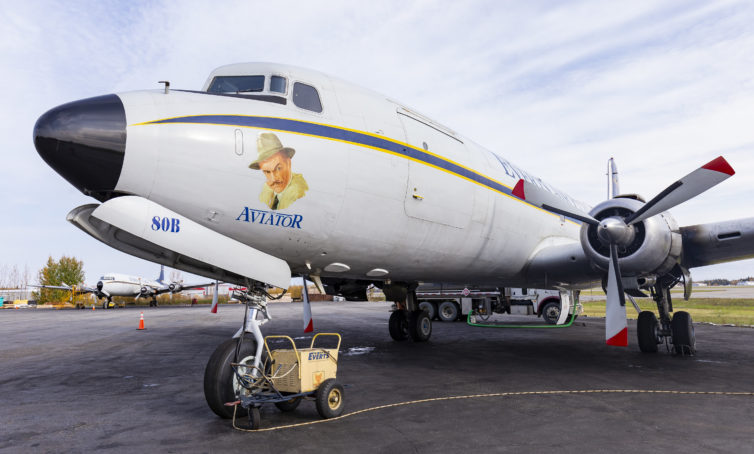 This DC-6, N7780B, started its career at Hughes Tool Company in 1957, and is named “The Aviator,” as an homage to Howard Jr. Now in service for Everts Air Fuel. 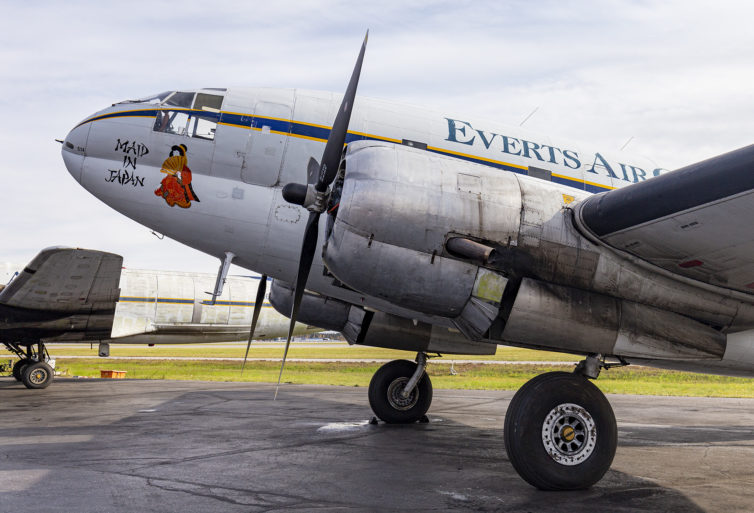 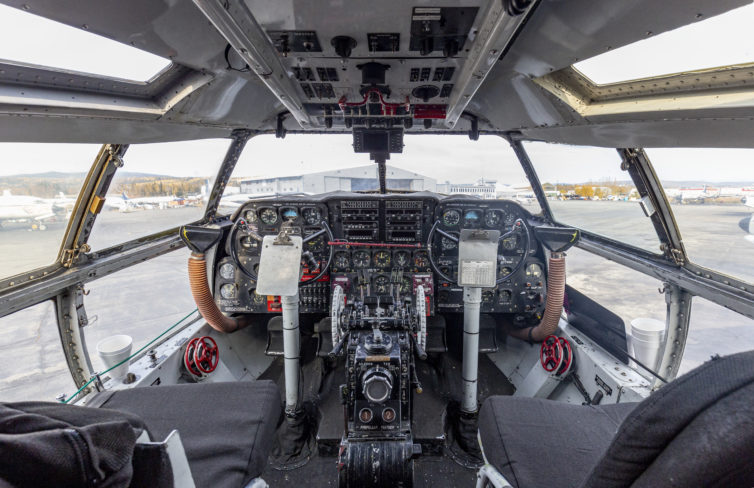 Cockpit view of N54514 – click a few times to view in full resolution, if you so desire. What a view! 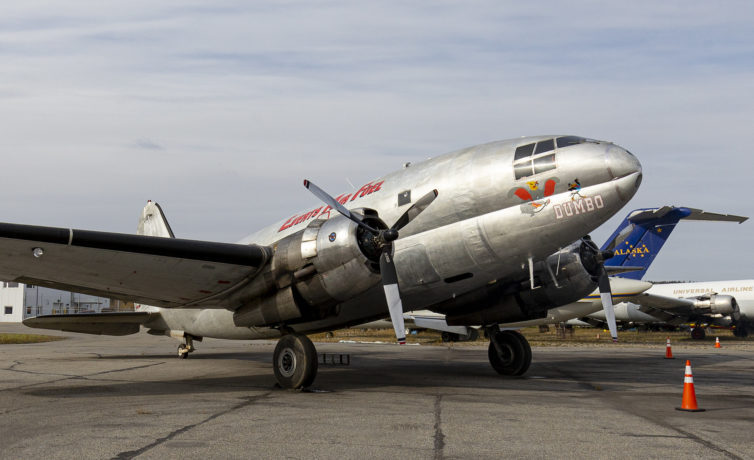 N7848B, Everts Air Fuel, ’œDumbo,’ delivered in February of 1945 – 75 years old and still flying in revenue service. Some interesting aircraft in the background too…

With the ramp reasonably well-explored, we moved onto the boneyard, where the fleet of part donors and eventual restoration projects await their futures. 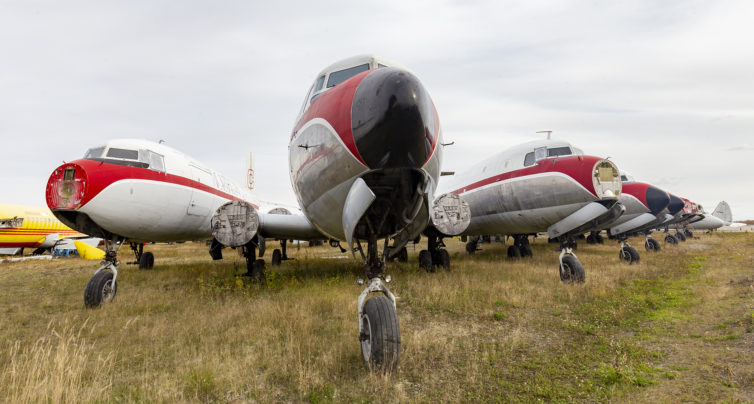 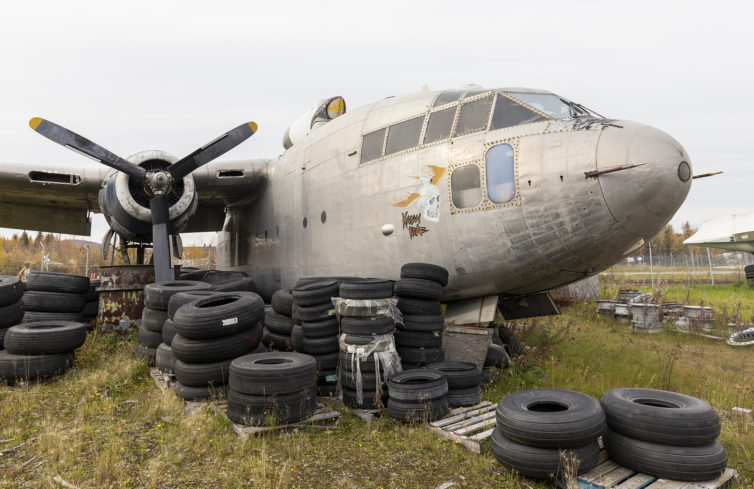 N8504Z, “Know Fear,” is a Fairchild C-119 Flying Boxcar. Note the shark-mouthed, dorsal-mounted bonus jet atop of the fuselage – apparently one of 56 equipped with a Steward-Davis Jet-Pak. Some additional trivia on this aircraft available at FlyingHigher.net.

There were a pretty good number additional aircraft parked in this area, which appeared to be in near-airworthy condition all the way down to what you see above. A few other tails in the boneyard, for those who might be interested in such things, include N148RF, N269CA, N1651M, and N7919C.

The next stop was the hangar, where DC-6 N251CE was getting some attention. 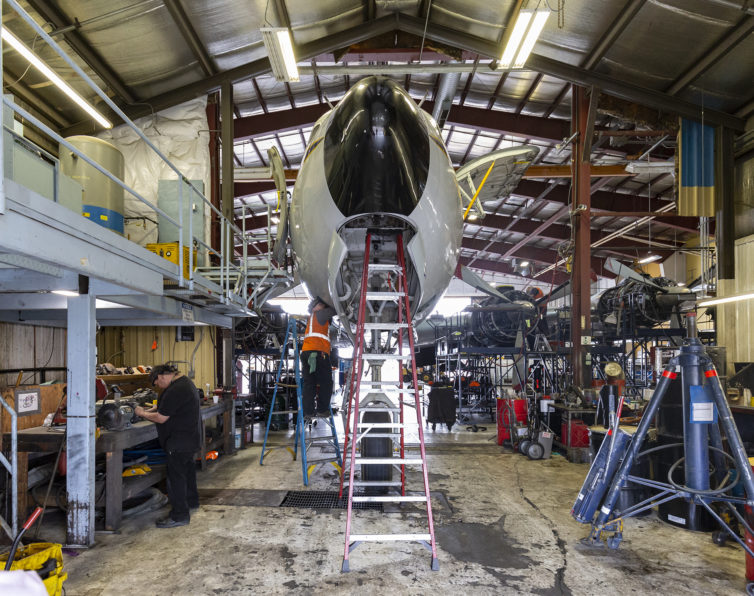 DC-6 N251CE getting worked on inside the Everts Air hangar in Fairbanks, AK. 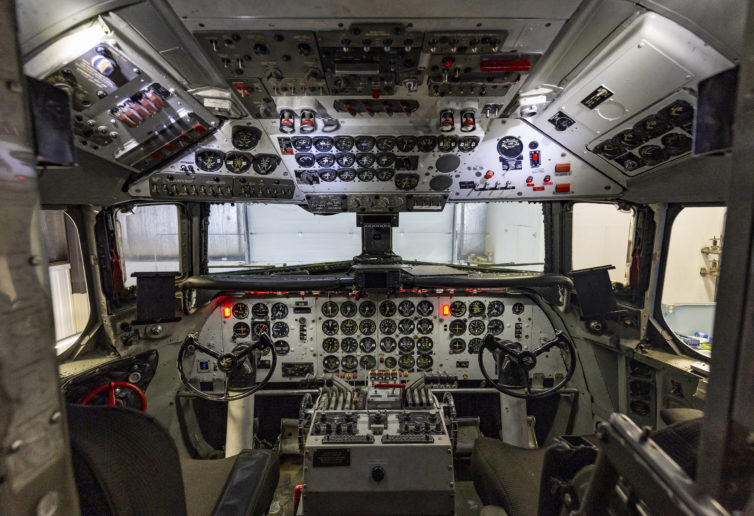 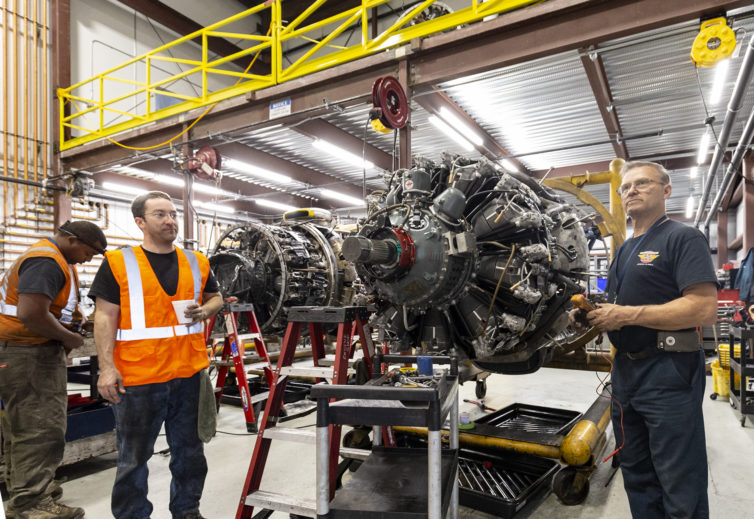 Everts Air mechanics with half of a DC-6’s worth of engines.

Another avgeek goal of this Alaska trip was catching an airborne DC-6. We’d struck out at Anchorage earlier in the trip, but got fortunate at Fairbanks! 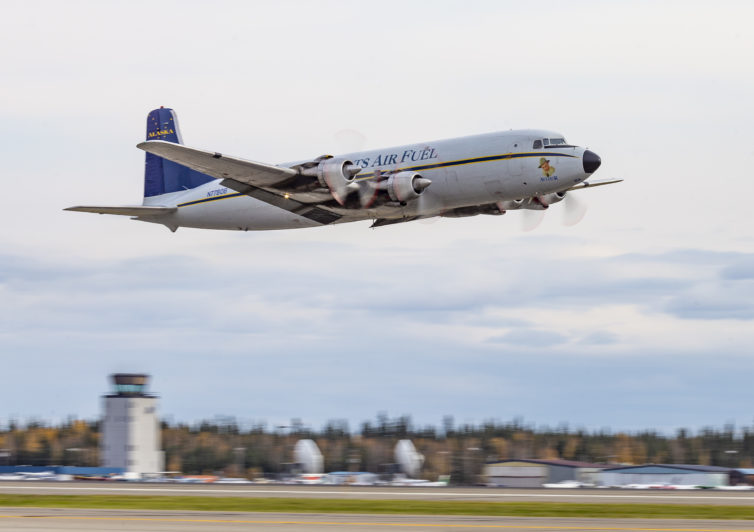 N7780B making a grand departure on 20R. Spotter tip: they climb slowly to build airspeed and loaded fuel tankers depart away from the more populated areas whenever possible. The tower and south end of the east ramp are visible in the background, the pizza place is just out of frame to the left.

This was great stuff, keep it coming, was not aware of the DC 6 still flying

I had no interest in aviation photography, and then I read the whole thing.

Great story of my home airport. I have flown two of the small GA planes in your photos, ate a lot of pizza, and I still loved your story and learned things. Let me know next time you are need of geek action and I will take you on a float plane ride of that pond and go see more of the Alaska interior.