Back in May I was desperate to fly somewhere — anywhere. By that time, I had not flown a single mile.  Yep that’s right, an AvGeek who flew over 60,000 miles last year alone was sitting at 0 miles until May. I was having major withdrawals and then I saw a fare sale to Alaska.

Last year, during my $100 Challenge, I decided on Kansas City over Alaska.  I was determined to tick that missing state off my list, and $200 round trip fares to Anchorage were a steal!  So I booked my trip and decided on a weekend of pure plane spotting.

I had heard, read, and seen how good spotting at Anchorage can be and I wanted to check it out myself.  The airport sits in view of a massive mountain range providing a great back drop to the aircraft taking off and landing. Adding to the scenic nature of the airport is the fact that it is the crossroads of freight aircraft going between Asia and the Americas.  What AvGeek wouldn’t want to spot there? 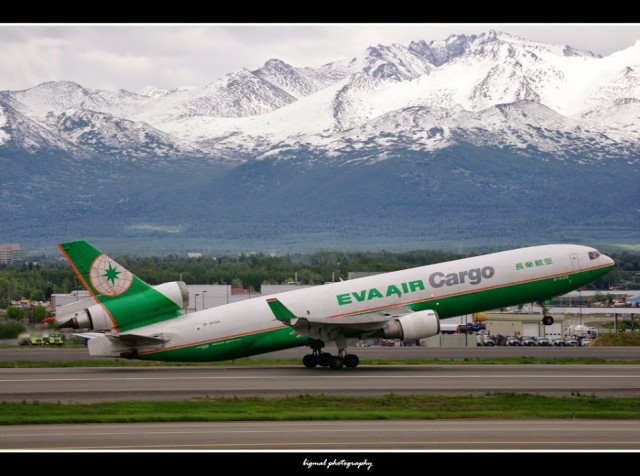 I headed up Friday afternoon after work on a severely-delayed United flight, which meant any chance of spotting at 10pm was not going to happen (yes, you can spot that late at night in Anchorage in the summer). I resigned to a few hours of sleep (2am arrivals are never good) and prepared for a full day at ANC the next day.

Saturday brought horrible weather; low ceilings, grey, rain, and high winds.  Even though it rained most of the weekend, there were times when it abated and the sun came out. I wasn’t going to let a little rain stop me! 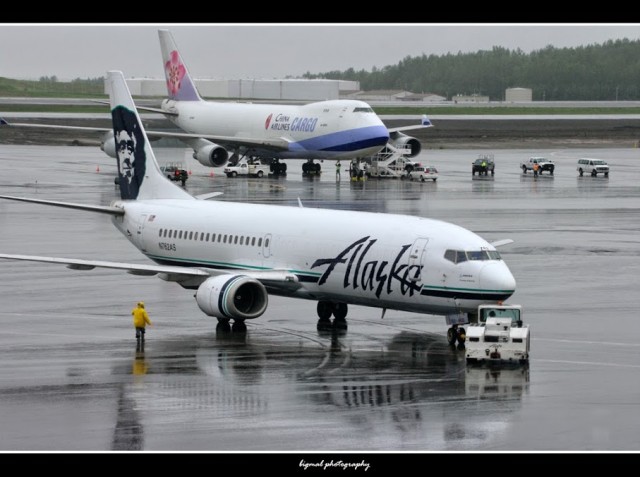 The spotting was fantastic and I think I took photos of almost every single 747-8F for Cathay Pacific Cargo and got a bounty of amazing unique catches.  DC-6 Freighter’¦ Check.  Alaska Airlines/Horizon Air Special University of Alaska liveries’¦. Check.  Era Alaska’s one & Only Ravn Alaska livery’¦ Check (for any fan of Flying Wild Alaska, I did not meet the Tweeto’s unfortunately).

One thing you will notice about spotting in Anchorage — it never stops — all day long! 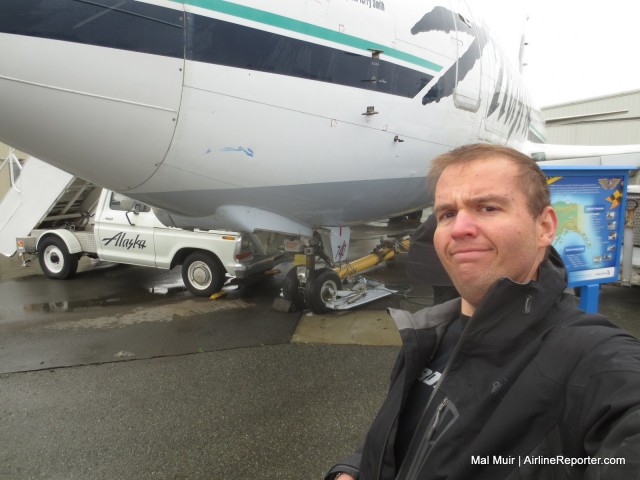 Yep, braving the rain… like a true #Avgeek would

Due to the winds that weekend, ANC was operating Runway 15 continuously, which meant that spotting was relatively easy.  I had booked a truck in case I needed to spot over fences, but in the end it wasn’t required.

At the end of Runway 15, just past the Cargo Ramp for DHL & Atlas is a park area that is open for a large majority of the day (when the gates are open, you are good to go). 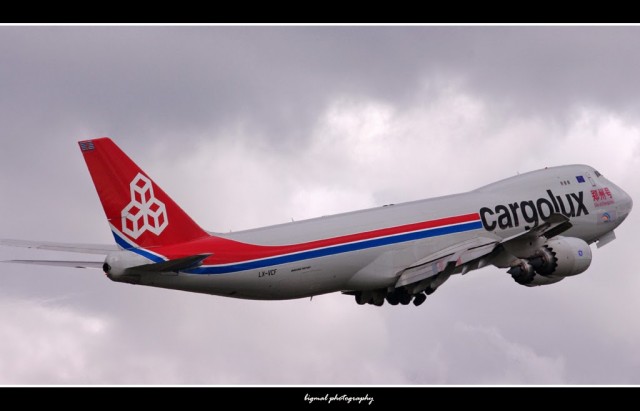 Down a short access road you will see a small gravel pit and opposite that, a large berm.  Welcome to the “Plane Spotting Heaven” at ANC.  Aircraft will be taking off and landing right in front of you and it is high enough to take photos straight over the fence.  Word of advice though; bring supplies.

Water & food are a good 10 minute drive away (if you follow the road straight, rather than turning back towards the terminals, the road ends up at a supermarket, great to get those supplies). 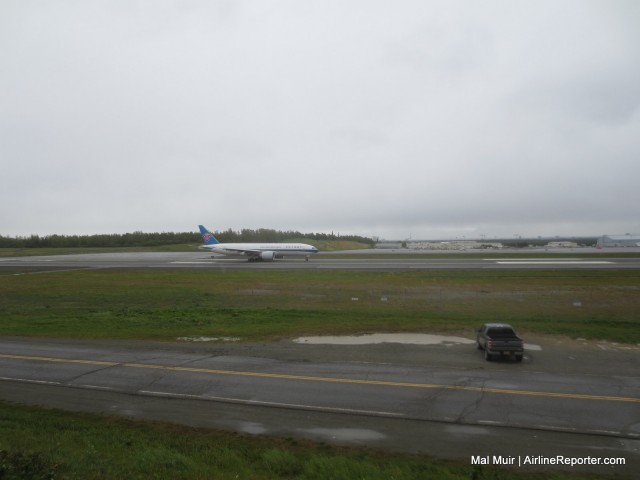 Spotting at Anchorage couldn’t be easier when Runway 15 is in use.

Planes will come and go continuously.  You will see the same Dash 8 & SAAB 340s dozens of times each day.  That Alaska Combi you saw this morning?  You will see it about 20 times over a weekend. The heavies though, come in waves. 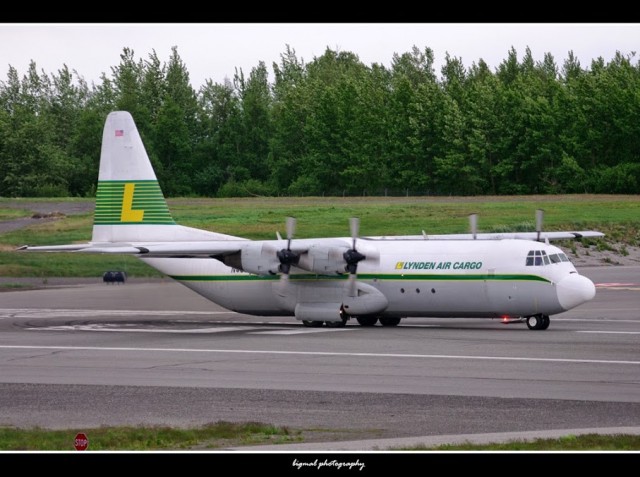 As one set of heavies arrives they will be on the ground about an hour to refuel (don’t worry you will be getting photos of those other planes in the mean time) and as they start to leave, another set of heavies will come in behind them.  You should see at least two or three 747s or MD-11 Freighters (or a 777F if you are lucky) on the ground at Anchorage, pretty much all day. 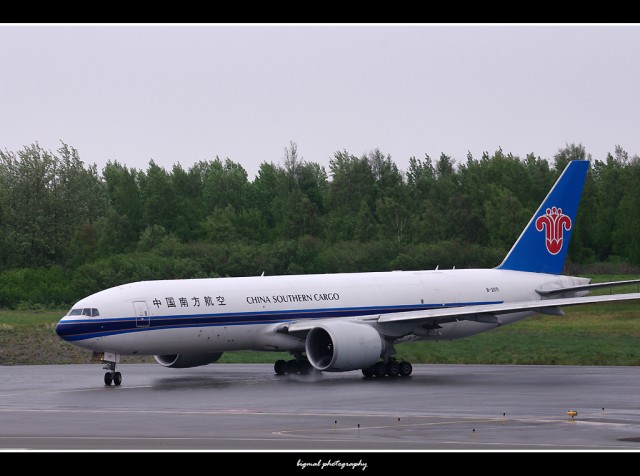 Getting a unique shot of a 777F. Check the Engine Intake… notice the Water going in?

Need a break from all the spotting action?  Head on over to the Alaska Aviation Heritage Museum, just by the side of the lake (which is also a seaplane base).

There are plenty of items in the museum that will keep an AvGeek interested — especially about the history of Alaskan aviation. Plus it’s warm and dry inside (well worth the $10 entry in my opinion just for that). 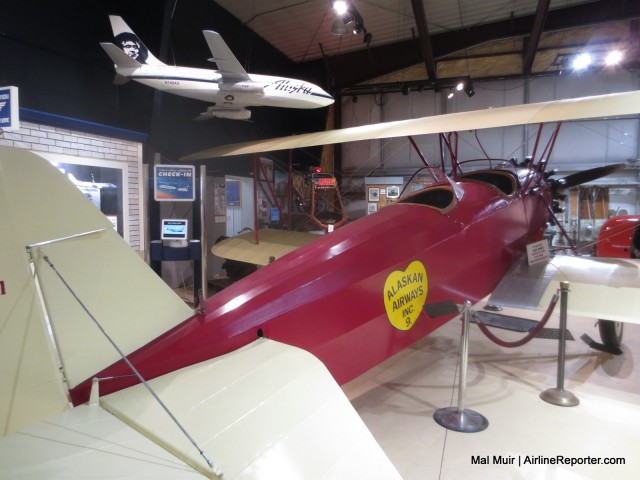 I had a blast in Anchorage and hopefully this little piece can inspire other people to head out and catch some heavy metal in the last frontier.  I can say that I have never had a spotting trip quite like this — rain and all.

You might be asking why I didn’t write this piece earlier?  Well the 7500 photos that I took over the weekend took a little bit longer than expected to work on.  I did manage to cut them down to several hundred though’¦ thankfully.

https://www.airlinereporter.com
Around the World: An Interview with Amelia Rose Earhart
The Pilatus PC-24 Rolls Out
4 Comments

Fantastic! All Boeing planes, except for the turboprops.

Great story Mal, and thanks.
I’ve passed through ANC several times, for transit – not spotting, and have long recognized them as a major fuel and potty break stop for the big freighters. Large birds, often with maximum loads tend to fly a little lower and a little slower than the impatient soul carriers, thus needing a stop. TO my knowledge, ANC schedules them well, turns them quickly and – despite often horrible flying weather, keeps their operations function darn near 365. And for the spotter looking for daily variety, ANC has to be close to the best available. A fun report and thank you. -C.

I’m glad you got to come to Alaska. I live in the Mat-Su, but I work in Anchorage and I’ve spent many lunch hours at the same spot watching jets land and take-off. One of the best parts is the noise that comes with the spotting.

If you ever get a chance you should go to Juneau for plane spotting. Although the airport there doesn’t have nearly as many jets per day as Anchorage (and nothing larger than a 737 can land there), there is a well-traveled trail that passes within 50 yards of the end of the runway. Jets literally take off and land right over your head.