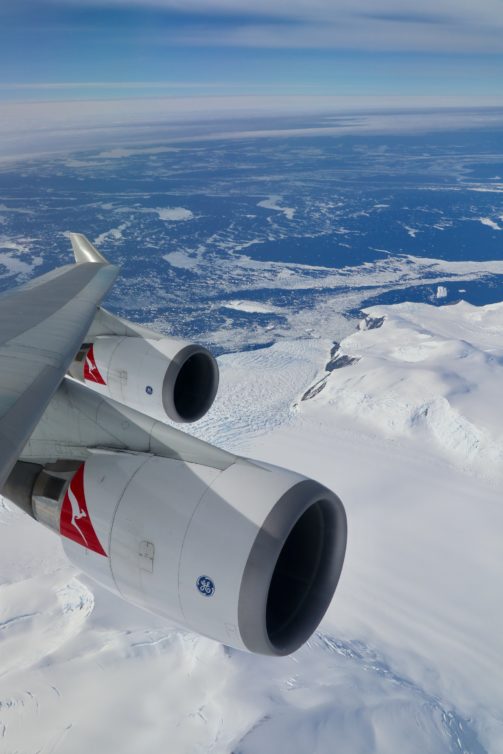 It’s not yet quite 05:00 as the day begins for the crew. In Sydney, Flight Dispatch and Pete Dawson at QMET have already been busily gathering the latest data, which the crew can tell from the prompt that appears on their iPads. The flight plan and most recent weather forecasts are available, and everything seems in line with the detailed briefing of the day before.

As the bus moves through the dark and silent Sunday morning streets of Melbourne, Capt. Fitzgerald discusses the weather once again with QMET’s Peter Dawson on speaker as the rest of the crew listen in. The plan remains, and the route toward Cape Adare is confirmed for the best viewing while the land to the south towards McMurdo appears to have substantial cloud cover. 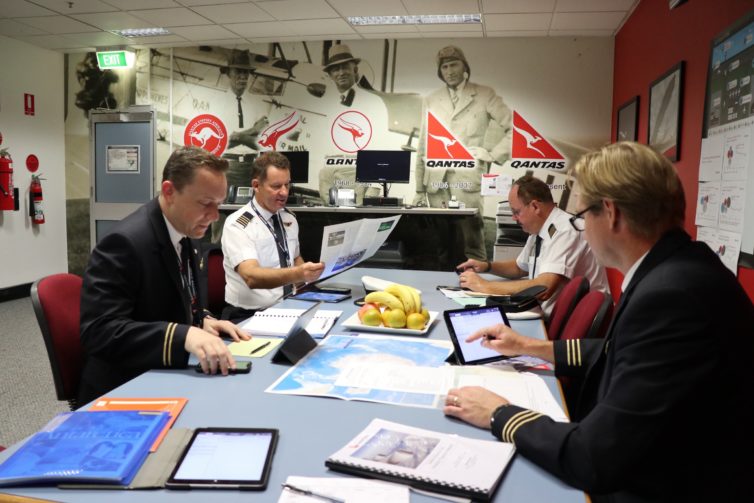 The glow of iPads is the only illumination as the bus makes its way to the airport. The latest briefing material has been uploaded as well as the flight plan, which includes an additional detail in its ATC flight strip: the maximum viewing time over Antarctica. By the time the crew is seated in the Domestic Terminal’s briefing roomâ€”yes, this is a domestic serviceâ€”all of the information has been reviewed and the discussion fundamentally reinforces the anticipated plan and considers the critical differences of the Antarctic operation one more time. 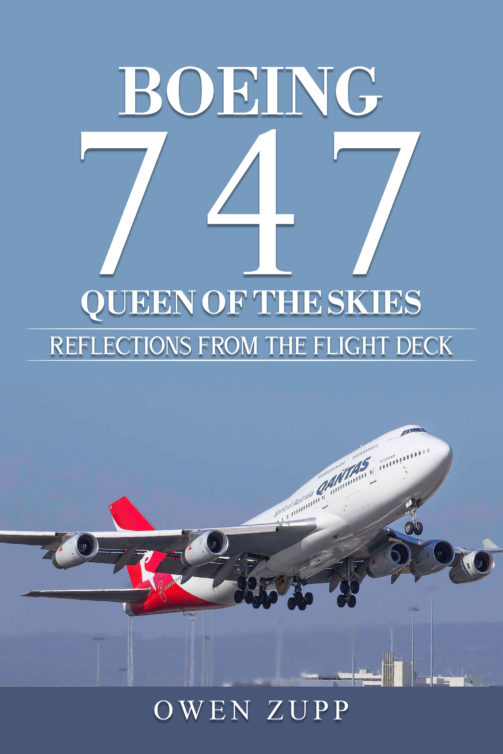 The engineers call to advise that the Boeing 747-400 VH-OEG has been fueled to its maximum capacity of just over 178 tonnes, given the current specific gravity (SG) of the fuel. They also confirm that the aircraft has been fitted with the additional audio-visual equipment and that the paperwork has been completed.

Aside from the digital flight plan, there is additional paperwork to be completed for the Australian Antarctic Division (AAD) in Hobart. AAD is the government department that approves Qantas to conduct these flights over Antarctica, based on environmental impact studies that Qantas supplies and logs that will be kept during actual flights. The Antarctic Flight Summary and Environment Log will be filled out in real time beyond 60 degrees South latitude and submitted to AAD post-flight.

The pilots then make their way down the hallway where Capt. Buddery addresses the cabin crew for the flight. There is a tangible level of excitement among the crewâ€”a mix of senior flight attendants and relative newcomers who all share a common fascination with the flight that lies ahead.

With well over an hour until departure, the gate lounge is full of excited passengers ranging from school students to a pair celebrating their 90th birthdays. Each with a name tag on their chest and vying for a photograph with the Penguin mascot, there is no mistaking this for your everyday Regular Public Transport service. Even with a comfortable margin of time until the Boeing pushes back, the crew is busy readying the aircraft inside and out. This includes confirming the operation of the specially fitted entertainment system and that it is in working order throughout the cabin.

As the sun edges above the horizon in the east, the last door of the 747 is closed and all is ready for the journey southward. 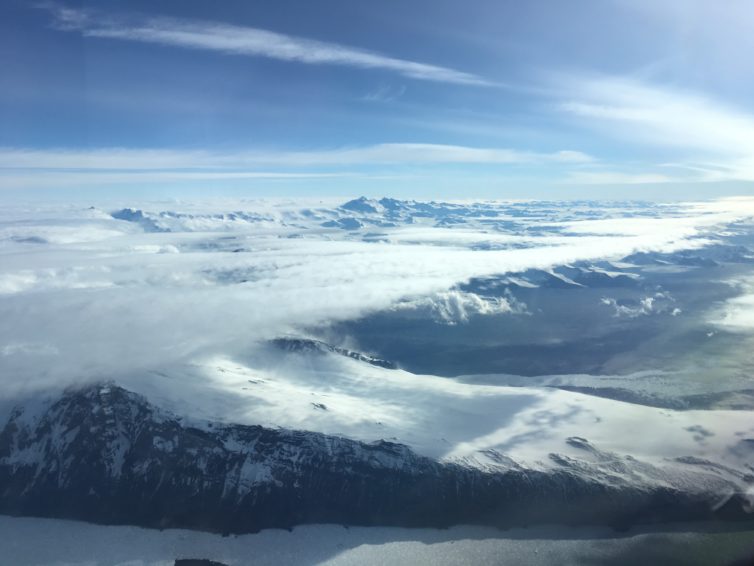 Flight of a Lifetime

At 406,000 kilograms (895,000 pounds), the aircraft is still more than 6,000kg (13,000lb) under its maximum takeoff weight. Under Capt. Buddery’s hand, it lines up on Melbourne’s Runway 34 and is given takeoff clearance. With the clearance confirmed by the entire crew, the thrust levers are advanced, and the four-engine giant begins to accelerate. At 173 knots, the Boeing is rotated, lifting its nose from the runway to start its climb into the morning sky.

The air is smooth as the four-hour sector to the ice begins. Extensive overcast lies below, and Tasmania only peeks through a break as the 747 passes overhead. Now comes a rare opportunity for the members of the crew to mingle with the passengers and answer a stream of questions about the 747 and the flight details. Interestingly, the pilots have questions of their own for the young PhD students from the University of Melbourne.

Stationed by one of the doors, the scientists have set up an array of equipment to conduct experiments relating to cosmic radiation and the earth’s magnetic field. And while they were impressed by the GPS’s read-out of over 300km/h during the takeoff roll, itâ€™s another instrument that is particularly impressive: the â€˜Dip Circle.’

Measuring around 15cm in diameter, the brass ring possesses a dual-face of glass with a needle inside. It resembles a large, see-through compass and is designed to measure the vertical component of a magnetic field, or â€˜dip.’ Made in the 19th Century, this piece of scientific craftsmanship has journeyed to Antarctica before, by boat in 1910.

Enroute, a phone patch has been organized for Capt. Fitzgerald to interview the Casey Station Leader, Christine â€˜Chrisâ€™ MacMillan, which is broadcast through the cabin. In a fascinating exchange, Chris informs the passengers on various aspects of life at an Antarctic Research Station. How the 120 crew is scaled back to just 30 in the winter months, the importance of working as a team, and recreational activities, which even include a dip into the icy waters on Australia Day.

With two hours remaining until we reach the Antarctic continent, the crew is busy with a range of duties. Critical fuel calculations and maximum viewing times are confirmed, contact is made with McMurdo Station, an updated briefing is obtained from QMet, and the latest QNHs are gathered from various bases in Antarctica. The most conservative QNH is chosen for altimetry purposes when the aircraft descends.

And that time is approaching. 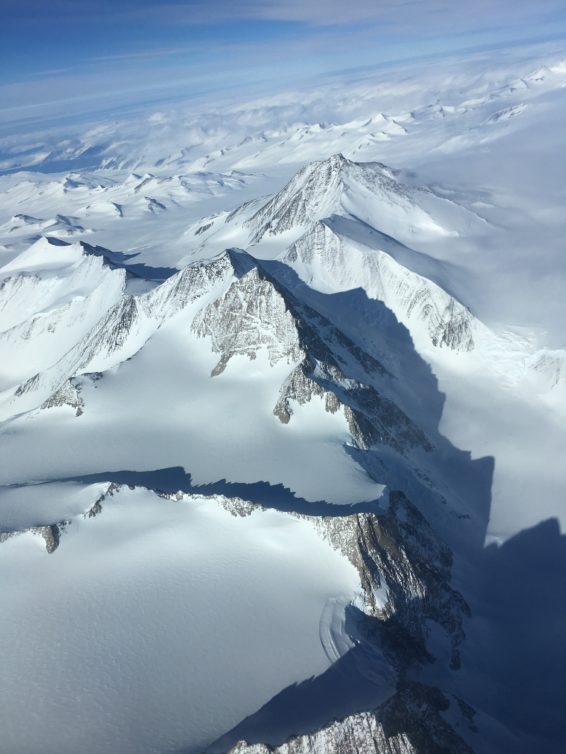 Passing 60 degrees south, the crew commences their additional logs, ensures that the topographical strip maps are at hand, and switches the 747â€™s heading reference from Magnetic to True as the deviation between the two becomes too great as we near the South Pole.

The cloud cover slowly starts to break up below and then, in the distance, are the jagged peaks of Antarctica. With the QNH, viewing time and critical scenarios double-checked, the aircraft begins its descent to a minimum safe altitude of 18,000 feet. McMurdo has advised that the LC-130 aircraft that was inbound has returned to Christchurch due to a technical issue, making the 747 the only aircraft in the area. Even so, reports are routinely made by CPDLC and broadcast on VHF radio.

Towering Mount Minto comes into view, and the sheer immensity of Antarctica becomes apparent. Landfall is made at Cape Adare as planned before we fly a short westbound leg, but it becomes evident that the meteorological team was correct and a cloud bank lies along that route. Turning back towards the Transantarctic Mountain Range, the view is spectacular, made the more so by the pristine air.

There are mountain peaks and razor-edged ranges, glaciers at every turn. Some are filled with reef-like lines of blue ice, which forms when snow falls on a glacier and becomes compressed, squeezing out air bubbles and allowing the ice crystals to enlarge. Beyond the coast, the water is partially covered by pack-ice with mammoth, mesa-like icebergs rising from the sea while their greater mass lurks below.

Some of Zupp’s other work

https://www.airlinereporter.com
Learning to Fly with Francis: Stage one checks passed, and… MY FIRST SOLO FLIGHT!
#StopAirTaxNow: Who’s Behind Airlines for America? What’s a PFC & Why Should You Care?
7 Comments

Very Information Blog Thanks for Sharing with Us.

The flight with sightseers over Antarctica reminds me of the New Zealand Airlines DC-10 crash in 1979 where due to a failure to communicate with the crew about changes to the flight plan entered into the flight computer the night before the flight, the aircraft flew right into the side of Mount Erebus.

i lived the era of global travel in the 80 and 90’s. my first international trip was in 1979, i flew eaSt from Nyc and never turbed around landed back 6 weeks later flying east, i circled the globe with most flights on the 747. Loved it. spent the 80’s and90’s traveling to Asia on the 747. stand up bar upstairs, later business class upstairs on nw. open bar, great food and service. miss that bird so much

Pan Am flight 50 using the 747SP covered both north and south poles before heading back to San Francisco 1977. 50th anniversary of Pan Am at that time. Pan Am along with technology advancements of commercial aviation transformed aviation to what we see today. Pan Am completed the route in 2 days via London, Cape Town and Auckland. Hats off to Qantas and the Queen of the Skies. My comments are reminded of posted comment by Ben Monette, globetrekked during the 80s, 90, into the early 2000s. The 747 was the aircraft I love dearly. It truly was a great time to be an avgeek globetrekker. I also miss that bird. Thank you Joe Sutter, father of the Boeing 747.

watched a good movie on Netflix last night, Executive Order. Some great actors. Kurt Russel ( not the pilot) landed a 747 on a short private airstrip outside of DC. A great plane and a good movie. Cheers!

This article caught my eye for 2 reasons….Antarctica and Boeing 747….the Queen of the Sky. I am currently working in Antarctica as part of the 2020 2021 medical team at McMurdo Station. My deceased husband, Roy Yoshimura, was a 747 Captain with over 37 years with Northwest Airlines. I’m sure he would have loved to have had the opportunity to take his favorite plane over Antarctica !
Thanks for the interesting article !

That’s interesting that Kurt Russell was in a Boeing 747 on a short runway.