Doing this was the culmination of a lifelong dream. Unlike a lot of airplane nerds, I don’t have any close family with ties to aviation. Instead, all of this started for me as a boy – my grandmother would take my brother and me to our little local general aviation (GA) airport in western Massachusetts, where we’d lie on the hood of her â€™69 Beetle and watch skydivers while eating ice cream. My interest in planes waxed and waned over the years, but never really went away. There was a time when *gasp* I was afraid of flying – my first-ever flight experience was a very turbulent series of flights down the Atlantic Coast in the height of summer that put me off flying for a long time. 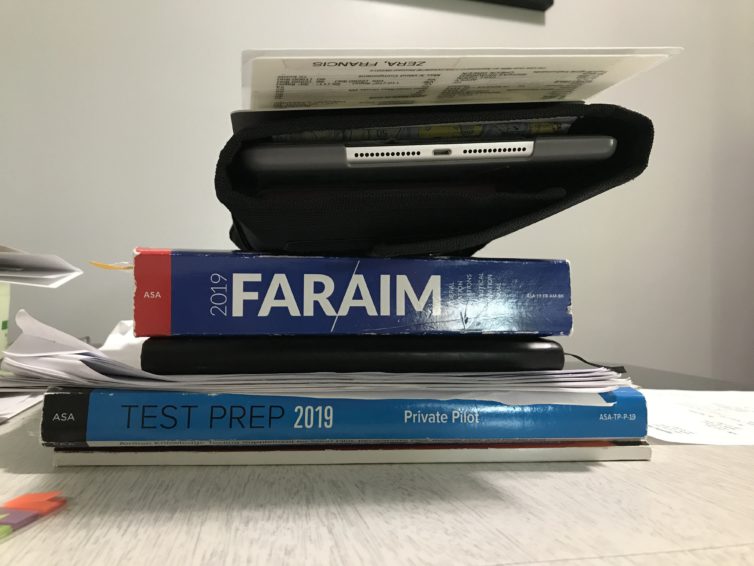 On the Thursday before the Labor Day long weekend, I had a one-hour ground session with an instructor who I’d seen around Galvin, but hadn’t worked with before. He asked me lots of questions about FAA regulations, Galvin’s house rules, where to find info about specific equipment required for airworthiness, and a bunch of stuff from the FAR/AIM (Federal Aviation Regulations / Aeronautical Information Manual), which is basically the bible for aviation regulations.

It went well; I’d expected an oral exam, but it was more of a conversation. I knew it would be open book, so I was allowed to look stuff up that I didn’t know, as there’s way too much stuff for anybody to possibly memorize. The important part is knowing where in the FAR/AIM to find the info.

I will confess to having been quite stressed out about all of this. I really wanted to succeed. The stress was all self-generated, but it was stress just the same. The folks at Galvin were patient and supportive and pretty much awesome. But I can’t remember ever being so nervous about an endeavor.

On Friday afternoon, I had a one-hour evaluation flight with yet a different instructor. On this flight, she told me her hope was to simply sit quietly and observe, not having to intervene in any way while I took us from the ramp out to one of the nearby practice areas, demonstrated whichever maneuvers she requested, fly back, and do three touch-and-gos, with a couple simulated emergency surprises tossed in along the way. 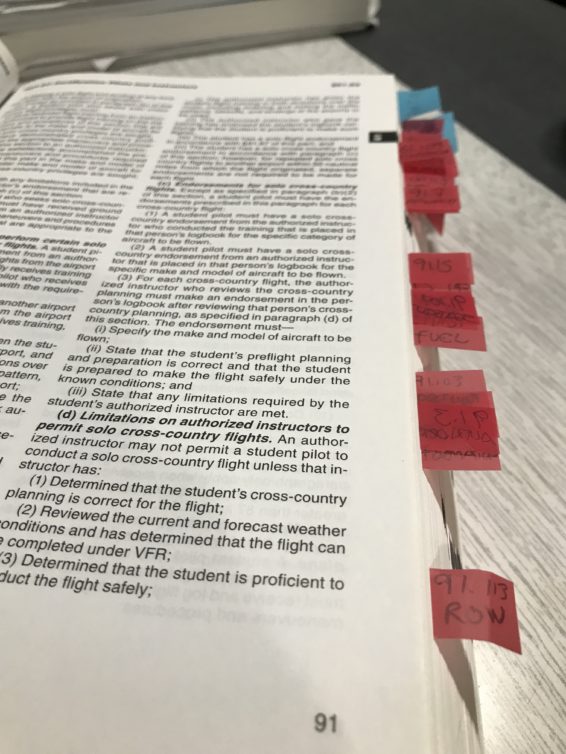 She’d be verifying that I could do the following without error:

There was some other stuff in there, too. It all went really well. The next morning would be my solo flight. 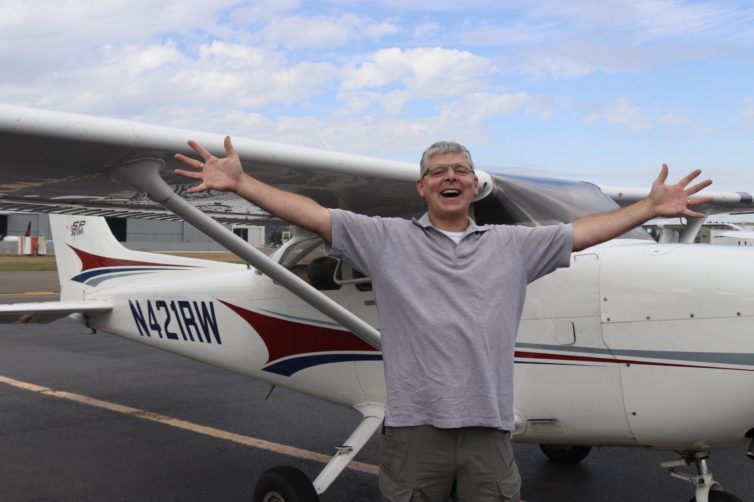 And what a day it was. Mostly clear skies with calm winds. August 31. In an awesome coincidence, it was also my beloved (and dearly departed) grandmother’s birthday, the woman who inadvertently started me on this path by simply trying to entertain two boys in a small Massachusetts town all those years ago.

My instructor accompanied me on the first two trips around the pattern (after all the normal preflight stuff, etc., of course). We then taxied back to the ramp, parked, and shut down the plane.

He got out, went through the formalities of verifying the validity of my student pilot certificate, my third-class medical certificate, and my photo ID before writing an endorsement in my logbook authorizing me to fly solo.

He smiled, wished me luck, and went to stand on the edge of the ramp to watch, holding an aviation radio, just in case I needed his help. This is referred to as a supervised solo.

Those first two warm-up laps really helped boost my confidence. The checklists took care of my remaining jitters, as they gave me plenty to do and, by checking off the items, reminded me that I actually was prepared for this. 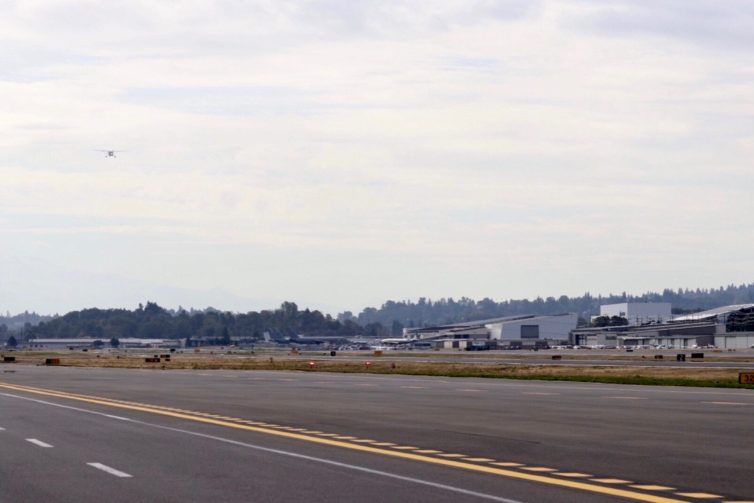 Off I go! Photo: Chuyi Chuang

Get taxi clearance, and don’t forget to state that I’m a student pilot per the rules so ATC knows what’s up. Taxi to the hold area. Switch to tower frequency and get takeoff clearance, taxi onto the runway, line up on centerline. Slowly apply full power, being sure to add enough right rudder to keep the plane straight. Note when the airspeed indicator comes alive. At 55 knots, rotate.

The plane practically leapt off the ground, surprising me a tiny bit. I knew the performance would be better with only one person in the plane, but it was markedly better.

I climbed quickly to 700 feet, and made the crosswind turn into the pattern. I reached the pattern altitude of 1,000 feet as I was turning downwind, so I simultaneously throttled back and pitched down a bit to arrest the climb during the turn.

From there, I flew straight along the power lines until abeam the numbers at the end of the runway, visible to my left, all the while listening for ATC to issue me a landing clearance, then responding appropriately to the radio call. And then I went back to talking out loud to make sure I didn’t forget anything.

“Once abeam the numbers, reduce power to 1,500 rpm to start the descent. Below 110 knots, set flaps to 10Ëš. When we’re 45 degrees from the end of the runway, begin the crosswind turn. Once stabilized on the crosswind leg, set flaps to 20Ëš. Turn to final. Look at the glideslope indicator to the left of the runway to be sure I’m on the right glideslope.” One red and one white light is what I want. Two white means too high, two red means too low.

“Set flaps to full. Keep the airplane on the extended runway centerline, correcting for any crosswind drift, crabbing into the wind as required. Continue to maintain glideslope. When close to the runway threshold, reduce power, eyes down the runway, perform the flare, set the plane down gently on the main gear.” Once the nose wheel is on the ground, slide your feet up the rudder pedals to press on the tops to switch to the wheel brakes and steering (you steer on the ground with your feet, not the yoke). Apply brakes to slow down, select a taxiway exit, turn off the active runway.

Come to a full stop with all parts of the aircraft across the the hold-position line. Complete the after-landing checklist. Don’t forget to breathe. Switch the radio back to ground frequency, request taxi clearance back to 14L.

Do this a total of three times.

Rolling out after the third landing, let out a whoop that’s so loud you almost deafen yourself via the mic in the headset. Stop, get taxi clearance. Laugh like a giddy fool the rest of the way to the ramp. Have a beaming instructor ruin a perfectly good T-shirt. 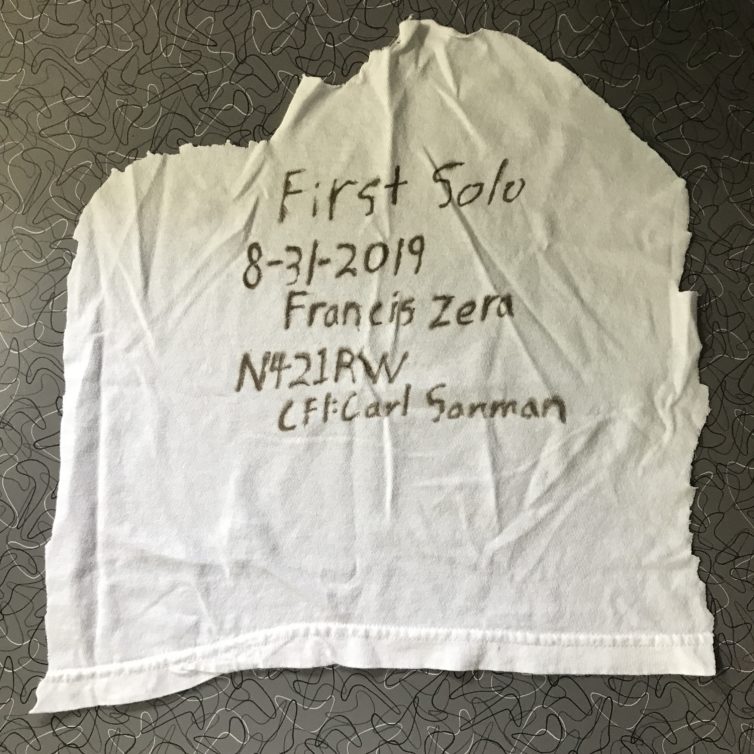 The remnants of the shirt I was wearing during solo. I now consider it a trophy.

What’s next? Another supervised solo, this time with touch-and-go landings instead of full-stop landings, then on to training with the instructor for soft- and short-field landings, and then cross-country flying and all the flight planning and navigation stuff that entails.

Thanks for sharing this, I’m finding it highly interesting.

Can you elaborate on these glideslope indicators, what they look like? Is this an indicator on the ground somewhere, or is it on your dashboard?

The glideslope indicator at BFI is a PAPI – precision approach path indicator. You can read more about it here:

Congratulations Francis! That ruined t-shirt is definitely a trophy. Display it proudly! Good luck on the next steps in training.

The documentation of your quest to fly is the best Airline Reporter story ever (apologies to David — there have been plenty of very interesting, well written articles/posts.) Congratulations, Francis. We knew you could do it!

Thanks, Phil! Much appreciated!

An eye opening post for all your readers. Its very full to me because I am working for https://www.cfipak.com/custom-clearance.php here we are providing all logistics services or also warehousing service and shipment service, tracking service in all our Pakistan.