Aer Lingus COO Mike Rutter said â€œWe are delighted to commence Irelandâ€™s first and only direct service to Seattle, Washington State, with four direct flights each week. Seattle as a destination holds great promise for Aer Lingus given the strong business ties between the two regions making this an important route for business travel as well as leisure trips as exemplified by the high demand for business class tickets on the route to date.â€ 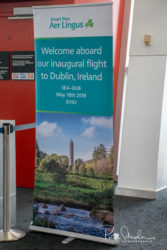 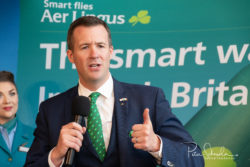 Consul General of Ireland to Western US Mr. Robert Oâ€™Driscoll 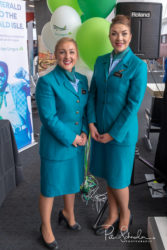 In addition to Dublin serving as stepping stone to other European destinations, on westbound flights passengers will get to clear U.S. Immigration and Customs in Dublin. The flight then arrives in Seattle pre-cleared and passengers will deplane and collect their bags as if they were arriving on a domestic flight. 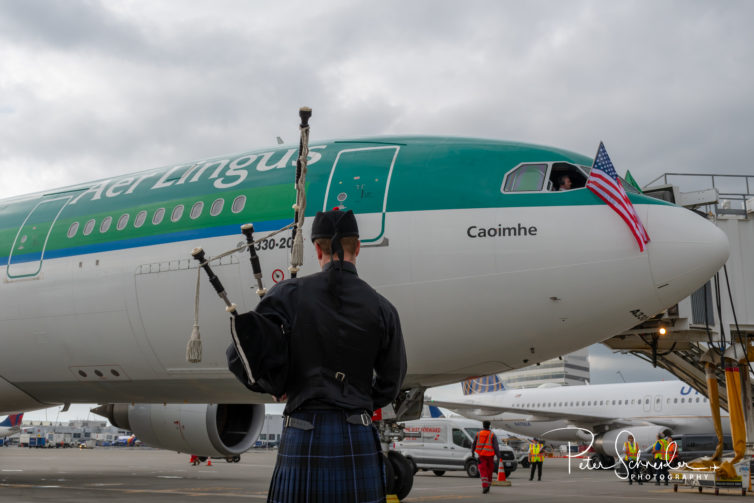 A bagpiper welcomed the inaugural Aer Lingus flight to Seattle

Upon landing, the Port of Seattle Fire Department provided a customary water-cannon salute. Also, a bagpiper was playing while the Airbus A330-200 taxied to the gate and parked. Inside the terminal there were plenty of festivities: speeches, a ribbon cutting, and plenty of cake. There was lots of green around the gate, from balloons to uniforms and banners.

Alaska Airlines was represented, making passengers aware of their global partnership with Aer Lingus and and the ability of being able to earn miles for mileage plan members. 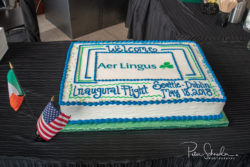 Of course, there was cake! 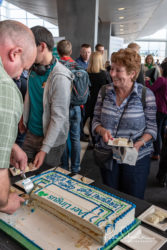 The passengers in the terminal enjoyed the treat 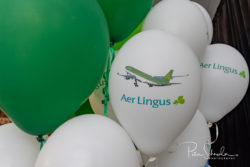 White and green, green and white

The flight was turned around efficiently for departure, and while taxing out to the runway, the fire department provided another water cannon salute. Aer Lingus flight 142 to Dublin departed pretty much on time at 7.33 p.m. 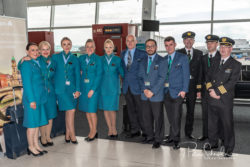 The crew posed for photos 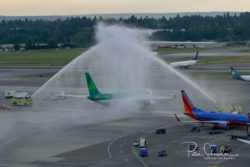 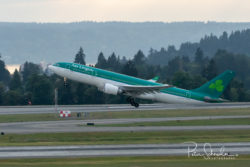 Notice how they arrived into the A-gates.
I would have thought that they would have used the S-gates, but opened the boarding doors not the immigration doors…

Great article Peter. Didn’t know that Bagpipes were Irish. Our daughters planning a class trip to Ireland. Better dust off the penny jar. Thanks for sharing.

“Dublin was the largest European city without direct service from Seattle.”

This seems obviously false. Dublin is pretty small, with a population of under 2 million for the whole region. (Ireland as a whole only has under 5 million people.) SEA doesn’t have direct service to numerous larger European cities, such as: Madrid, Barcelona, Rome, Milan, Athens, Berlin, Brussels, Budapest, Munich, Vienna, etc.

Probably should have read “one of the largest European airports without direct service to Seattle”. You are right about the size of Dublin, about 2m in the metro area, however the airport is one of the busiest in Europe, 14th as of 2017 with ~30m passenger movements.

Flights from Ireland to the US get complete customs and INS service in Ireland. You arrive in the US at any gate and walk to baggage or simply leave the airport. Really cool.

Even measured by passenger movements, there are quite a few busier airports in Europe without an SEA flight, like IST, MAD, BCN, MUC, FCO, etc.

In addition to Dublin serving as stepping stone to other European destinations, on westbound flights passengers will get to clear U.S. Immigration and Customs in Dublin. The flight then arrives in Seattle pre-cleared and passengers will deplane and collect their bags as if they were arriving on a domestic flight. This is a very convenient way to handle business.

I don’t think Istanbul counts as a European city yet. Istanbul is technically in Asia.