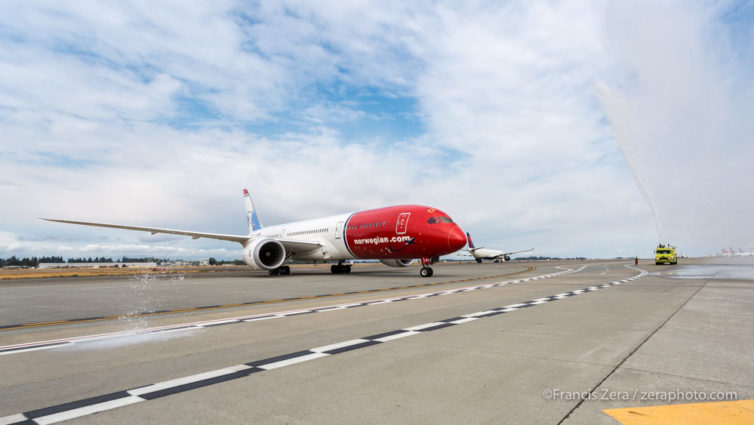 The jet was welcomed to Seattle with a traditional fire department water-cannon salute. In announcing the new service back in April, Norwegian Chief Commercial Officer Thomas Ramdahl said, ’œWe are very excited to continue our expansion from the United States and add Seattle to our ever-growing route network. Seattle has always had a special place in Norwegian’s history and corporate profile as we have an all-Boeing fleet of more than 130 aircraft delivered from Washington State, and more than 200 Boeing aircraft on order.” 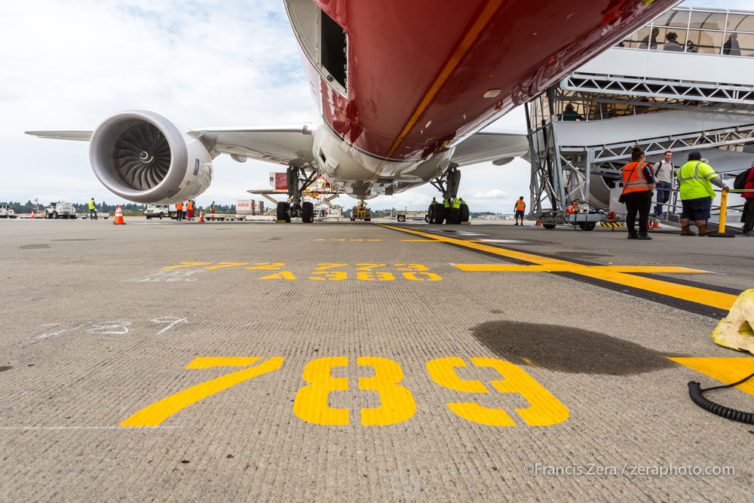 Freshly-painted marker numbers greeted the plane at its stand 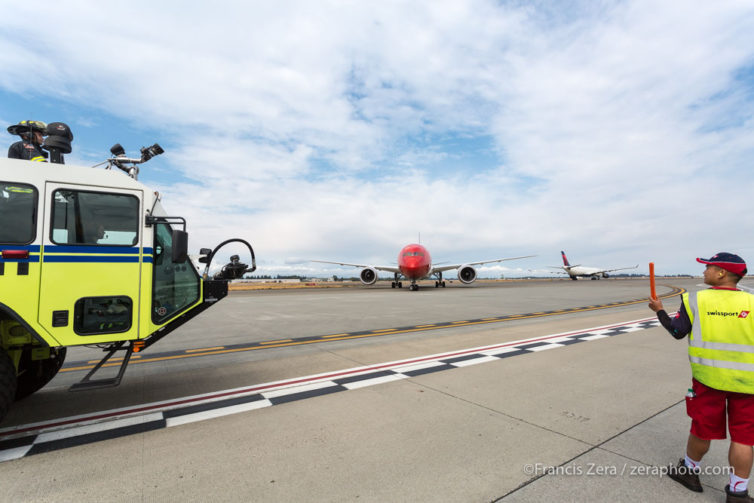 ’œThis is another example of how diverse and widespread our economic growth is here in the region,’ said Lance Lyttle, Sea-Tac Airport’s managing director. The 4x weekly flights will operate on Mondays, Wednesday, Fridays, and Sundays. 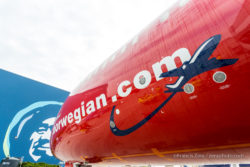 The Alaska eskimo looks on as the Norwegian jet is unloaded 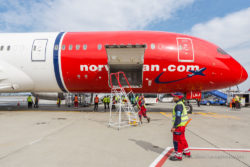 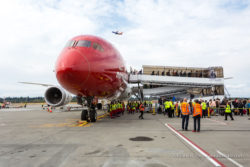 There was no other fanfare for the arrival, just the wonderful ballet of unloading an incoming airliner. 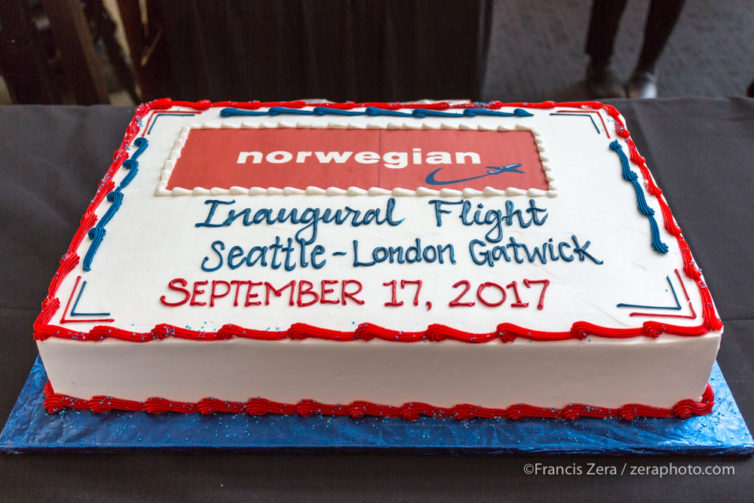 It was a quiet service launch, but there was a lovely cake for the outbound passengers.

Clearly, Norwegian has made an impact in Amerika -and they intend to stay. With tow of their flights under my belt, one up front and one toward the rear, their ‘soft product is ada(broken key)and not worthy of a note to Mom or anyone else. They cover the basics in both cabins, but friendly and cheerful is not part of their act. The meals at both ends were within class standards, but not beyond that. Frankly, their second service on a very long flight was well below acceptable standards, even up front. Norwegian is a LCC/ULCC and I guess the intend to prove it. I’d like to say something nice about them but the words will not flow. At best it is fair to say that the airplane appeared to be clean and none of my four legs had any known mechanical problems; that the PAX were are of. At the end of the day, some airlines are transportation companies who include some entertainment. Some are entertainment venues that offer transportation. is in the former class. While I experienced no hiccups, I understand that they are very common and that the carrier is most reluctant to assist anyone with anything. At best, I’d call them dull.
In fairness I should also note their standard livery is borderline offensive. The red pointy front end reminds me of a seriously inflamed male part. As a retired RN, I guess that just goes with the territory. Frankly, I am not likely to fly Norwegian again. Even the typical LCC do what they can to enhance the experience. In my estimation, Norwegian simply does not care, one way or another. It appears that their sole objectives are to fill their airplanes and fly them on a published schedule. Anything beyond “Fill and Fly,” seems to be beyond their understanding. I have to wonder about their maintenance practices and how well they cope when a flight is cancelled or forced to divert. I do not want first-hand experience. -C.

The 787 is built in a beautiful new facility in South Carolina not Washington.

The 787 is built in both Everett and Charleston. This particular aircraft was built at the Everett plant and delivered in April, 2016.

I,am retire from fedex wanting to know.if there highering in Charleston

I’m with Cook. I’ve always thought of their livery as an uncircumcised. . .well, you get the idea.