It’s about time that Anakin’s robotic masterwork got some love.

ANA has done a series of fantastic special liveries for their partnership with Disney to promote the Star Wars franchise. Starting with the R2-D2 themed 787-9 that rolled out factory fresh, they moved on to a BB-8 themed 777-381/ER, and finally a combination of Astromech droids emblazoned on a 2002-vintage 767-381/ER.

The first flight of this scheme emblazoned aboard JA743A will be from Haneda to Kagoshima on March 21. From there it will work its way around the Japanese sky. Remember, at ANA the 777-200 is a purely domestic bird. 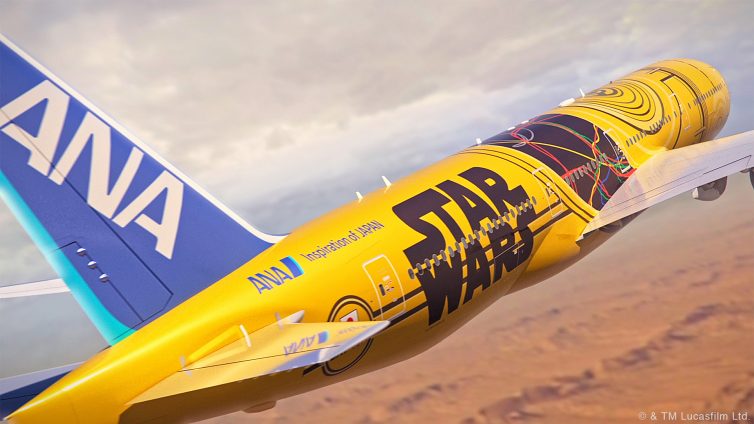 I really wonder how the yellow-gold hue will translate into real life – Image: ANA

It looks awesome. Or, well, it will look awesome when it is unveiled.

For now we just have to dream about how amazing it will look in person from the renderings ANA gave us. 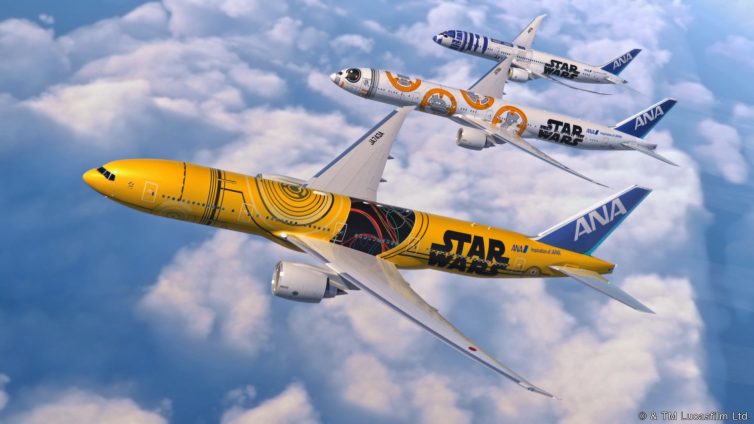 We also have to assume that since it has at least one silver landing gear leg, there will be no red engine.

Hey ANA, if you’re reading this – can you send me one? Pattern: ANA

On board, the cabin crew will have themed aprons. ANA, again, has gone all-out on promoting the Star Wars universe. They’ve also done the traditional, robot-themed antimacassar.

Really makes me want to go to Haneda.

As a Star Wars fan and an aviation buff, this is pretty cool! Even better than the R2-D2 or BB-8 themed liveries!

I hope JA743A will be EASIER to chase down than JA873A! Last Spring, when I was in Tokyo, I saw JA873A just ONCE; as it was operating out of HND at that time. I saw it landing on the northern diagonal runway – from the International Terminal Deck. Naturally, it parked at a gate on the North Finger. So, I shot ZERO frames of it! It was my BEST MISS of that spotting mission! HOPEFULLY, I’ll have better luck this coming Spring!?

However, I saw JA789A DAILY at NRT! It is GORGEOUS! Looks even better with the naked eye and through my lenses than web images! It should retain the Star Wars logos for about another three years – by my SWAG.

Ironically,JA604A turned up at NRT; on the afternoon of my departure flight back home. ( At HND It eluded me!) So, I shot it from inside T-1; as it was on ANA’s Domestic Remote Apron. It likely was operating their daily flight down to Okinawa; their ONLY Domestic 763 flight out of NRT.

Is there a paint code for this scheme? I need it.Thanks Pat